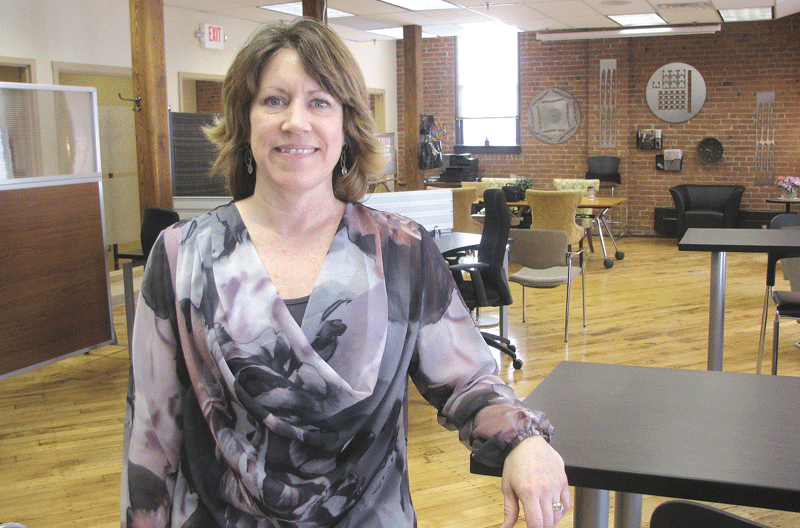 Lauran Thompson says the practice of law, especially for solo practitioners, lends itself to co-working spaces.

Co-working spaces — where solo practitioners ply their trade in a common area to share expenses and collaborate with other business owners — is not a new concept, but it has been slow to catch on in the Western Mass. legal arena. That’s surprising, says Lauran Thompson, considering how many lawyers work alone but could benefit from the dynamics of co-working. That’s why she launched Dockit in January, hoping the downtown Springfield space attracts a mix of new and experienced lawyers intrigued by the benefits of collaboration, idea sharing, and simple convenience.

Joan Williams is a well-established defense attorney, having maintained a solo practice in the region since since 2005.

She worked from an office in Northampton, but after she and her family moved to Connecticut, she found she didn’t relish the hour-long commute, so she opened a new office in Springfield. But she found the space bland and was looking for a change. That’s when she heard about — and became quite intrigued by — a new venture called Dockit.

“It’s the complete package,” Williams said of the new co-working space for lawyers that opened in January in downtown Springfield, a five-minute walk to the Hampden County Hall of Justice. “It’s a nice space. I don’t have to go out and buy furniture or pay for Internet service, and I don’t have to worry about finding conference space.”

Lauran Thompson — a paralegal who had managed her family’s law office, Thompson & Thompson, for 15 years — recognized the value of co-working as well, and saw opportunity in a model popular among law professionals out west and in Boston, but sorely lacking in Western Mass.

“Managing a law office, I’ve seen first-hand how important collaboration is,” she said, adding that her firm was looking for ways to be more collaborative with other attorneys. “I started looking into finding a workspace where we could do more collaborating, and I happened upon this new co-working movement. My research showed there’s a movement in the legal community toward shared space.”

The business she started, Dockit — located just off Main Street, in the pedestrian walkway between Harrison Street and the MassMutual Center known as Market Place — provides exactly that, with plenty of amenities to boot. Members don’t have their own desks or offices, but can work or meet with clients in a number of shared spaces, from open seating areas in the central area to three small, private conference rooms. The modern layout contrasts with the dark wood and exposed brick of the renovated building, creating a vibe that seems to suit the Millennials that will likely comprise the bulk of the facility’s ever-changing membership.

“We’re reaching out to solo practitioners spread out all over the county, offering a space to come and meet with people and share ideas,” she told BusinessWest. “We have WiFi, desktop computers, printing, faxing, scanning, videoconferencing, and a nice kitchen area where we keep lunches.”

Go HERE to download a chart of Law Firms in Western Mass.

Co-working is not a new concept in the Pioneer Valley; business incubators in particular are known for their use of shared space and collaboration. But in legal circles, Dockit is filling a gap regionally. Although lawyers of all types are welcome at Dockit, Thompson said defense attorneys will comprise the majority of members, in part because of a quirk in the system.

“It’s particularly important for people who are working as bar advocates,” she explained. “There’s a requirement for them, if they want to be on the list for Hampden County, if they want to be assigned a case, to have an address in Springfield. That’s for the benefit of the client, so the client doesn’t have to trek around to meet them.”

A quiet space near, but separate from, the courthouse makes sense in other ways, Thompson went on, noting that the courthouse is packed with district attorney’s office staff, judges, clerks, criminal defense lawyers, bar advocates, and others in close proximity, and there’s not much room to discuss matters privately. “Imagine putting both football teams in the same locker room. We give them space to come and collaborate.”

Dockit offers several tiers of membership with different price points, depending on how often a member needs the space, ranging from five days a month to five days a week. That flexibility is valuable, Thompson said, for lawyers who use the space for an array of reasons, from everyday work to an occasional need for collaboration with fellow attorneys.

“A cornerstone of co-working is co-workers,” Erin Sperger, a legal research and writing attorney in Seattle, wrote in the New Yorker recently. “For single-lawyer firms, it is great to be able to discuss ideas and cultivate relationships with attorney co-workers. When compared to a traditional law office environment, the kind of conviviality found in a co-working space can be a breath of fresh air.”

She warned of privacy issues that can arise by using shared equipment and speaking to clients in an open area, but said common sense and caution eliminates most of those.

“For me, the advantages of co-working far outweigh any possible risk,” she wrote. “It is more than just office space; it’s a rich source of mentoring, referrals, and an opportunity to collaborate by co-counseling with other attorneys. Co-working spaces attract people who like the idea of collaborating and sharing resources — generally a pretty great batch of people.” 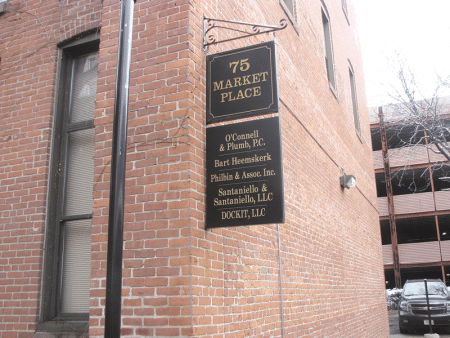 Dockit’s location along Market Place in downtown Springfield gives it easy access to the Hampden County Hall of Justice.

Thompson said Dockit isn’t likely to be anyone’s permanent home, and the membership model — it’s renewed monthly, with no long-term leases — means lawyers can come as long as the facility benefits them. Some members, she added, are established attorneys with separate offices seeking the collaboration, continuing legal education (CLE) programs, and convenience offered through co-working — all summed up by Dockit’s slogan, “the firm alternative.”

“A lot of attorneys come out of law school, and to take appointments from the the court, they have to have a mailing address in town. But it can be difficult signing a two- or three-year lease, so we provide a place where they can meet with clients without that lease.”

Thompson would like to see Dockit expand its offerings as well.

“We’ve started doing some e-mail surveys to see where there’s interest in social events after hours — showing movies or doing docket discussions,” she explained, adding that events could center around current hot topics in the legal world, such as the current controversy over a Supreme Court nomination, or some new ruling that may be impactful to the Greater Springfield legal community. “We might talk about it, what kinds of motions we need to draft, what we need to do.”

Others who maintain home offices far away from the courthouse may use Dockit to help their work-life balance, she added. “They’re not going to close their home office, but this gives them an element of professionalism, where they can put their name on the door and have a place where they can meet clients that isn’t Dunkin’ Donuts or Barnes & Noble. There are a lot of benefits.”

Williams appreciates all of them, but came back to one in particular.

“For me, the biggest thing is having people I can bounce things off of. As solo practitioners, we sometimes don’t get that back-and- forth around issues. It’s good to have this space where people can come in and ask questions.”

While bringing in more CLE opportunities and expanding awareness of Dockit, Thompson hopes the idea expands in Western Mass., just as co-working has in other industries.

“Within the co-working movement, the legal community is certainly a niche group,” she said. “I’d say we cater mostly to the defense community. We’re open to other types of lawyers, but we cater our CLE events to the defense community, which tends to be a community that doesn’t get a lot of these resources. We want like-minded people to be able to share information, while, at the same time, we’re really conscious of client confidentiality.”

It’s a balance, just like the work-life balance that Millennials — a generation known for not only collaboration, but a mobile lifestyle — crave. “They don’t want to carry the anchor of a five-year lease commitment. If you make that kind of commitment, you feel like you have to be in that space.”

On the other hand, because of its tiered plans, lawyers can make Dockit a space that works for them, not the other way around.

“What’s going to happen with the co-working movement is exactly what we’re doing — it’s starting to branch into niche groups,” Thompson said. “This is the wave of the future with Millennials. They don’t want to sit in the office all the time. Here at Dockit, we cater to that.”

Ignorance Is Not Bliss