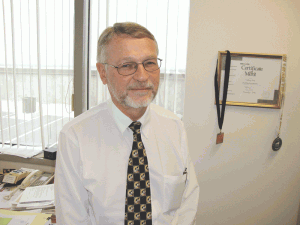 Bill Terry says communication with residents is crucial to moving big projects, such as the proposed assisted-living facility, along.

Kenneth Elstein, newly appointed chair of the Belchertown Board of Selectmen, said that, with so much going on in town these days, it can be difficult to see the forest for the trees.
While two large, long-running projects — the ongoing saga involving redevelopment of the former Belchertown State School and long-overdue realization of the Cold Spring Golf Course on Route 21 — are the buzz from Town Hall to the coffee shops, this community remains a fertile field for small business.
“These smaller shops opening up aren’t making headlines the way those other two are,” Elstein told BusinessWest. “But they are certainly affecting the shape of the business sector here.”
In what he called “news falling under the radar,” Elstein said that new business has grown to the extent that it has markedly affected the town’s tax revenues. “Since the mid-’90s,” he explained, “not only has business real-estate tax revenue gone up, but it has gone up hugely as a proportion of the overall tax collections. It’s something on the order of 4% to 8% over the past 15 years. We have the fastest-growing town in Western Mass., so you’d expect it to go up as a straight dollar amount. But to go up as a percentage amount is enormously important. It helps relieve the rest of the tax burden for residents.”
Elaborating, he cited figures from the town’s Community Preservation Committee. “Between 2001 and 2008, businesses increased by 36%, and jobs by 29%.’”
So small-headline operations are clearly making a marked impact in this town of 15,000. But those aforementioned signature projects are still the talk of the town, and there is apparent progress with both.
Town Planner Doug Albertson told BusinessWest that, after numerous false starts, the golf course, now owned by Qianlong (US Boston) LLC, a Chinese business with an office in the Boston metropolitan area, is seemingly ready for prime time.
“Of course, this property has been through a few hands in the last 13 years,” he said. “This time, though, people are confident. Qianlong has put a lot of money into this project.”
Indeed, since acquiring the property from Southbridge Savings Bank, which owned it through foreclosure, Qianlong has invested large sums on top of the $2.3 million purchase price. And the course, which is described as a high-end, destination layout, is finally completed, and set to open in 2012.
Meanwhile, concerning the state school property, Bill Terry, chairman of the Belchertown Economic Development and Industrial Corp. (BEDIC), said that stages of the project are moving forward, and the partnership with Weston Solutions to develop the beleaguered site is solid, with an auspicious future.
But a lot now depends on the town’s voting population, he continued, noting that votes at a series of town meetings will ultimately determine the fate of the property.

Linked In
Just over a decade ago, the property on Chauncey Walker Street, a.k.a. Route 21, was an apple orchard, said Albertson, adding that its evolution into a golf course has been a slow and (for town residents) painful process of evolution and business calamity.
The original developers of the project petitioned for a golf course special permit in 1998, and as part of that development also planned a 150-unit residential development, typical of similar high-end golf initiatives.
“They made errors, shall we say,” he explained, “and lost the property. The next investor did finish the golf course, but they, too, lost the property to foreclosure.”
The golf course that Qianlong purchased in August 2009 was basically complete, but not fully finished. According to materials distributed to local press, Qianlong has finally made the finishing touches needed to make it a high-end destination course.
“Qianlong has already spent a few million in infrastructure,” Elstein said. “Roads, paved cart paths, drainage … to complete the project, the final numbers that have been bandied about are along the lines of $40 million in total investment. A couple weeks ago, the latest that came to us was a special permit for the main public building on the site, which will be a catering hall and restaurant.
“The developer is throwing out numbers like 190 employees,” he continued, “probably not all full-time due to the nature of catering types of jobs. But unmistakably it is a facility the likes of which we don’t have here. It would be a big place, in the context of our town. And this developer has a keen interest in attracting foreign tourists. Qianlong has a lot of plans for this site. There has been talk about doing retiree housing there, also.”
According to Lawrence Tuttle, one of the principals and owners of Architectural Insights in Palmer, architect for all structures at the course, the clubhouse will be the first of the formal, public buildings to be completed. Tee times should expect to follow sometime in May 2012.
“The clubhouse will be prominent up the hillside and highly visible upon approaches to the property,” he said. “It’s a cross between a traditional and craftsman-style of construction — fairly informal, but with some rich detailing.
“The owners have made a reinforced effort and determination to make this a thoroughly quality development,” he continued. “That is apparent with the money already spent at the golf course, and also, pulling back, in reviewing the overall master plan, and their acquisition of other property adjacent to the original golf course.”
A critical component to that master plan is the number of residential units ultimately to be built at the course. While earlier developments had projected more than 150 apartment-style units, the current design calls for 75 duplex residences, to be landscaped into the property while maximizing views out over the course and the surrounding valley.
Ultimately the market will dictate the completion date for the full complement of residences, but Tuttle said that, with the current pace, it’s possible to see the start of construction as soon as next year. But for now, it’s all about the links.
“We are delighted at the scope and quality of this project,” he said. “We’re putting quite a bit of energy into the project, but so are the owners. A lot of local craftspeople and trades are involved in this project, so it’s good for many around here.”

Some Assistance, Please
As for the state school property, which has been closed for more than a decade, Elstein said that quite a few people who have expressed interest to the BEDIC in doing business on that site. And Terry said the same thing.
However, before that can happen, a project needs to get underway, something that will generate momentum and turn interest into activity.
Weston Solutions, the enterprise committed to the revitalization of the state school property, has identified an assisted-living developer who is, in Terry’s words, “ready to go” on a 170,000-square-foot facility that could provide such a spark.
Weston has asked the BEDIC to sell it a 10-acre parcel for this purpose off Berkshire Avenue, a town road that needs to be improved. Such a first step would signal the beginnings of the larger redevelopment and, in Terry’s words, “would identify to the world that we are for real, and the number-two deal would be forthcoming.
“So our task here in town now is to figure out how to make it happen,” he added.
The BEDIC would need to upgrade the road, and Weston has agreed to the subsequent expenditures necessary for the assisted-living development, to the tune of some $2 million, said Terry. In order to pull its end of the agreement, the BEDIC is putting together a DIF (district improvement financing) package, which would allow the town to vote on a real-estate tax flow, which would allocate funds for a bond to complete the road repair.
And the paper chase doesn’t stop there. “We’re also in the process of pulling together a second grant application that looks at other infrastructure work,” Terry explained, “because it appears that this is something the BEDIC can do.
“But we’re also doing a third thing,” he went on, “which is working with our legislative team on discussions to see what the Commonwealth would like to do in cleaning up the rest of the state school property. The bottom line is, because of the contamination on the site — asbestos, lead paint, and more — it’s more expensive to clean the site up than the absolute value of the property once cleaned. So we have to take that case to the Commonwealth and see if, in fact, they will consider funding some of those bonds to clean up the rest of the site. And then we would turn around and sell those pieces of property at fair market value.”
The immediate deal that needs to begin, however, is the project for the assisted-living facility, and it is here that Terry said the full participation of Belchertown’s voters is essential for the future of their town. The first vote will be to set up a DIF for the 10 acres, and pending that approval, the second vote would be to sign the real-estate tax flow with the project’s developer, in order to pay off the bond for the infrastructure repair.
“Anything we do is going to be brought to the town meeting,” Terry emphasized. “Obviously there will be public meetings, and these things will also be discussed in front of the Channel 5 public access. People can track along the entire way.
“And once we get the hearings scheduled,” he added, “we’re hoping the townspeople take the time to understand how these things happen. Because if we’re not successful at town meeting, we’ll have no project, and no way to move forward because there aren’t funds available otherwise to do what has to be done.”
He gives top marks to all the local participants working diligently — on a volunteer basis — to see this successfully to fruition. And Weston, he added, is fully committed to the project.
A lot depends on the people in town, however, and Terry admitted that these tougher financial times mean that an initial opportunity such as the one presented by Weston needs to happen procedurally, all the while taking a bit more time than would be the case during a more robust economy.
But there are other businesses in the wings awaiting the fate of the assisted-living project. And while it’s too soon to tell who these parties might be, the fact stands that Belchertown itself is on the radar.

School of Thought
“We’ve done a lot of due diligence, and we’re seeking advice and counsel on all fronts,” Terry said, explaining the stages before these crucial decisions at the ballot box.
“I’d say it’s like moving a chain uphill with your nose,” he said with a smile. “That’s exactly what we’re doing.”

Of Mind and Machine