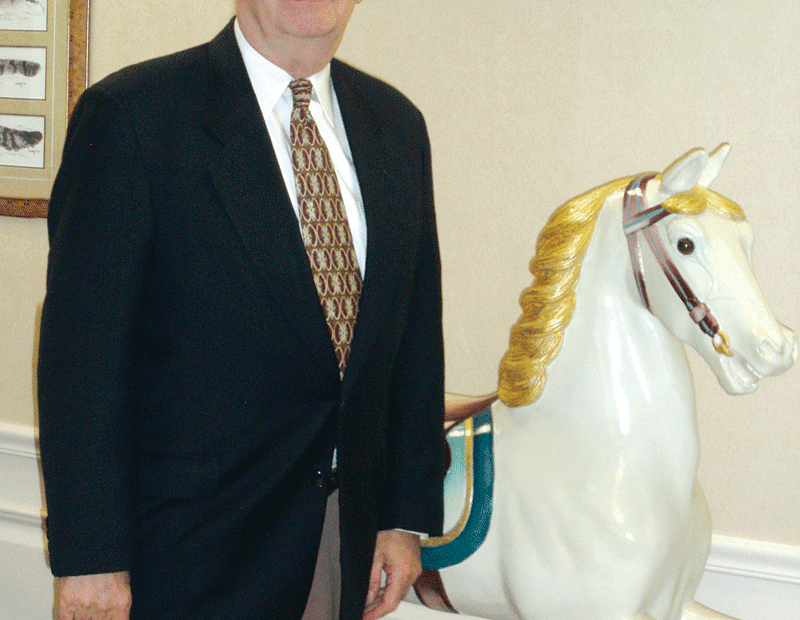 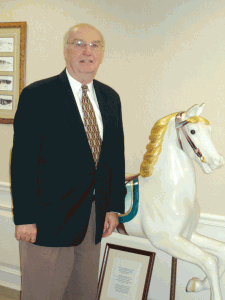 Wayne McCary says the numbers clearly show that the Big E is a powerful economic engine in the region.

Wayne McCary views the Big E as a wheel with many spokes.
“It’s the tremendous diversity of the vehicle that causes so many people to come here,” said the long-time president of the Eastern States Exposition. “There really is something for everybody from babies in strollers to people who are 90 years old.”
The wheels have changed in size and scope since the exposition, known then as the Springfield Fair, opened in 1916, but they are still spinning in the right direction. In fact, in spite of the poor economy, the Big E set an all-time attendance record in 2009, with 1,260,400 visitors.
McCary attributes last year’s success to two factors: good weather and tradition. “The Big E has become a tradition in New England for thousands and thousands of people,” he said. “Everyone has prioritized the way they way they spend their money, and it’s clear that people stayed closer to home last year because of the economy. People look for value more than they did in the past, but they can have a wonderful time here and stay within their family budget.
“Still,” he conceded, “it was remarkable to set an all-time attendance record in 2009.”
However, the fair’s history shows that tradition trumps bad news, both economic and societal. “The Big E opened a few days after 9/11 in 2001,” McCary said. “Planes weren’t flying, and professional sports were grounded. But more than a million people came here.”
The 2010 edition of the fair, which opens Sept. 17 and runs through Oct. 3, is one of the largest in North America and draws vendors from across the U.S. and Canada. “We have a $2 million budget for entertainment, and 90% of it is free with admission, which is a big drawing card,” said McCary.
The American Bus Assoc. has listed the Big E in its top 100 places to visit for many years, and in 2009 it designated the fair as an ‘international’ event, raising its status to one shared by the Indianapolis 500 and Macy’s annual Thanksgiving Day parade in New York City.
“We are the only fair in that category. In fact, the Big E is the only fair in the nation that has more than one state participating,” said McCary. “The six New England buildings are a real draw, and people who go through them can actually claim they have been in all of the New England states, as each state owns its building and the land it sits on. Surveys show they offer a mini-tour with icon products that attract visitors.”
About 650 tour buses visit the Big E each year. They arrive from across New England, New York, New Jersey, Pennsylvania, and occasionally farther out, said McCary, who talked at length with BusinessWest about the fair, its traditions, and its strong influence on the local economy.

Economic Engine
A study conducted in 2008 by Regional Economic Models Inc. in Amherst showed that the 17-day fair is a powerful economic engine which generates just under $225 million as a result of visitor spending. That amount does not include money spent by people in Hampden County.
“The assumption is that people who live in the area would spend their money on other things if we weren’t here,” said McCary. “The number reflects new money for Hampden County.”
Almost half of the Big E’s visitors travel more than 60 miles to get to the fair, and 69% have a college education, according to the report. The fair draws 37% of its guests from Massachusetts, 50% from Connecticut, and about 12% from other places in New England. “The majority come for one day, but many people who live in close proximity come for multiple visits,” said McCary.
The Big E creates 2,800 full-time jobs and 3,500 temporary jobs in Hampden County which otherwise wouldn’t exist, the report concluded.
“The Big E impacts many sectors,” said McCary. “There is a trickle-down effect, and the hotels in the area are always filled to capacity. Vendors and competitors vie to get rooms during fair time.”
The Big E also contributes almost $500,000 in local hotel taxes, and adds $7.53 million to the state budget in sales-tax revenue.
When the report first came out, McCary found the results astonishing. “I was stunned at the magnitude of the Big E’s impact on the economy. It far exceeded what we were claiming, and the numbers were so strong, we asked to have the results reviewed to confirm they were accurate,” he said.
Paul Picknelly, who owns the Sheraton Springfield Monarch Place Hotel and the Hilton Garden Inn in Springfield, says the Big E is a tremendous benefit, not only for hotels in the immediate area, but also throughout the Pioneer Valley. “Our hotels do a substantial amount of business from that particular event,” he said. “The economic impact is significant for the hotel business.”
But more important is the year-round roster of shows held on the exposition grounds. “I don’t think there are more than a handful of weekends throughout the year when we don’t have rooms booked from visitors attending events at the Eastern States Exposition. To sum it up, it’s the largest hotel-room generator in Western Mass.,” said Picknelly.

Farm Factor
The Big E, known as the Springfield Fair until 1949, was founded by Joshua Brooks in 1916. At that time, regional farmers decided to to set aside state boundaries and work together to combat signs that agriculture was on the decline.
“Joshua went to the national livestock show in Chicago and convinced them to move it to West Springfield. At that time, there was nothing here but a swamp. None of the facilities had been built,” McCary said. “The first fair lasted only a few days, but it was big enough to launch a succession of fairs that have continued until today.”
Each year, thousands of children from 15 states participate in 4H and Future Farmers of America competitions during the Big E’s 17 day-run.
The agricultural component of the show remains important, and “the competitions are very crucial to people in the livestock, sheep, alpaca, and horse business,” McCary said. “The credentials of the Big E in agriculture are very strong nationwide, and winning a competition here adds value to their livestock.”
The exposition has survived storms, floods, and recessions, and encompasses many facets of New England life. Today, it extends far beyond its agricultural roots, and there are attractions to interest people of all ages. “There are so many elements to the Big E. People can shop until they drop, come for the entertainment, or eat their way through the fair. But many still come to see the farm animals,” McCary said. “The fair provides a unique opportunity for urban people. There is still something that makes the public want to reach out and touch a cow or see a chick hatch, and the Big E brings all this together.”
About 80,000 people enjoy the Big E circus each year. McCary has been producing it since 1970 and says each act is drawn from some of the most promiment circuses around the world. “Because it is a supercircus, we rotate the cast and generally don’t repeat acts from one year to the next. This year we have four acts that have never been seen here before.”
Other attractions include the Mardi Gras parade, which has been so popular, it will run twice a day this year. There is also the Better Living Center, with 127,000 square feet of what McCary describes as “wall-to-wall shopping,” plus Storrowton Village, where history comes alive.
Last year, the fair introduced the Craze-E-Burger, which earned the Big E international acclaim after the bacon cheeseburger, which is served on a glazed donut grilled with butter, was touted by Facebook fans. Director of Marketing Noreen Tassinari said it was talked about by Jay Leno and David Letterman and was written about in the New York Daily News, the London Daily Telegraph, and newspapers in Australia. “Social media is very important to us,” she said.
There is so much to see and do at the Big E that 90% of visitors surveyed over the past 10 years say they will return. “It’s a tremendous referendum for any product or service, and the challenge is how to live up to expectations,” McCary said.
But one thing is clear, he added. “When I am asked what I think about the future, I borrow a phrase from Coca Cola: it’s the real thing.”