HOLYOKE — After a four-year search, Girls Inc. of the Valley unveiled what will become its new home on Tuesday — the former ‘O’Connell building’ on Hampden Street in Holyoke.

At an elaborate, well-attended press conference, Girls Inc. leaders announced that the nonprofit had acquired the property and has mapped out extensive renovation efforts and plans to open the new facility perhaps as early as a year from now. 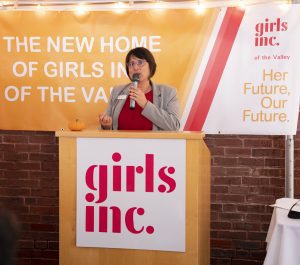 Girls Inc. Executive Director Suzanne Parker told those assembled that, as part of a strategic plan created more than four years ago, the nonprofit has sought a new home that will bring all its programs together under one roof and facilitate growth that will enable it to serve more girls in the Pioneer Valley. The search for such a facility has been a long and sometimes difficult undertaking, she noted, one that eventually brought Girls Inc. to the Hampden Street property, which was the longtime home to the O’Connell Companies, and later law offices after O’Connell built a new headquarters on Kelly Way in Holyoke.

“In many ways, the pandemic has helped make this possible,” said Parker, noting that the law firm’s plans to attract office tenants to the property were certainly impacted by changes in how and where people work.

Girls Inc. closed on the property earlier this month, acquiring it for $790,000 with financing from PeoplesBank, said Parker, noting that extensive renovations to many portions of the property will bring the price tag for the project to roughly $3.5 million. A capital campaign — the Her Future, Our Future campaign, which has an overall goal of $5 million — was launched more than a year ago, she said, adding that funds raised through that campaign will be used to cover those costs. 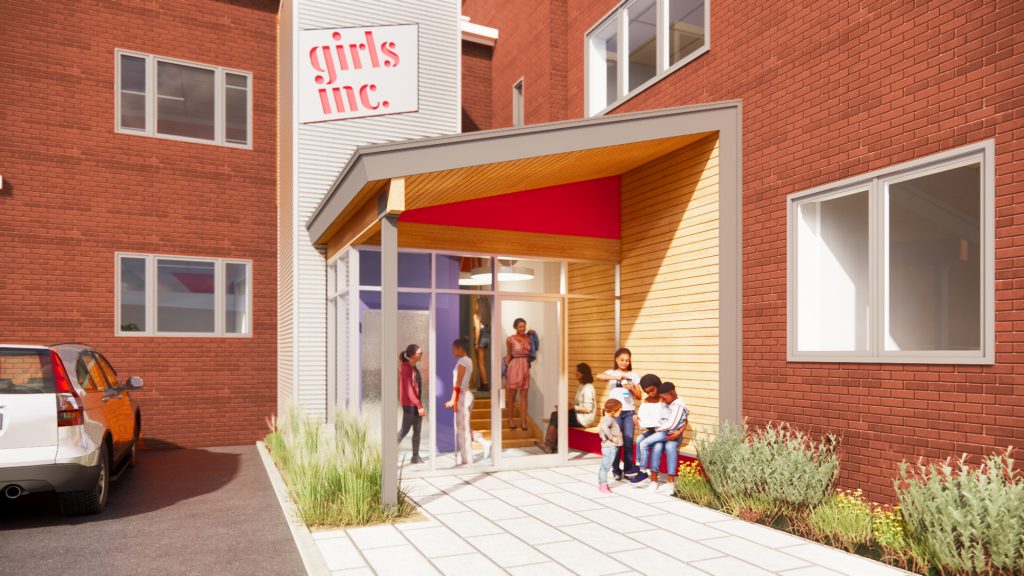 A rendering by Kuhn Riddle Architects of the future front entry of the Girls Inc. facility

The site brings a number of benefits, said Parker, listing a 55-space parking lot and ample room — 16,000 square feet over two floors — for facilities that will include a cutting-edge STEM makers’ space, library, two multi-purpose rooms, a teen lounge, a kitchen and dining area, administrative offices, and more.

The press conference included remarks from Holyoke Mayor Terry Murphy and several Girls Inc. leaders and alumna, including Cynthia Medina Carson, board member and co-chair of the Her Future, Our Future campaign, who remembers becoming involved with Girls Inc. when she was just 5.

“What we need now is the next-generation place for Girls Inc. — a location that enables our programming to match up to where we want and need to be, for girls,” she said.