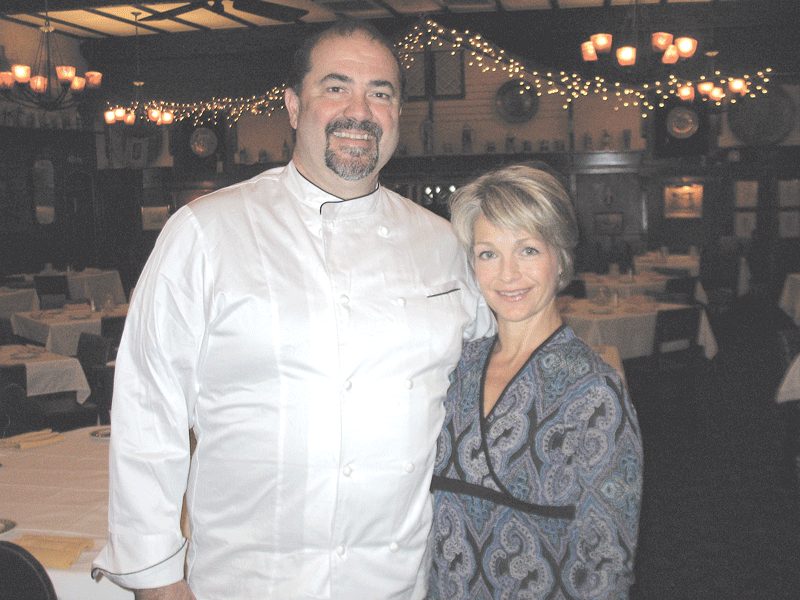 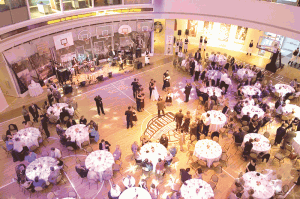 Center court at the Basketball Hall of Fame provides one of the region’s unique party environments.

The past several years have been up and down for venues that host corporate holiday parties. On one hand, the recession has affected companies’ celebration budgets, yet most employers still see value in thanking their staffs for a year of hard work. As a result, area party bookings have largely remained steady, although many companies have scaled back on their size and cost. Still, restaurants and banquet facilities say the early signs are positive that the end of 2011 could be a merry season.

Early October is when things finally settle down on Memorial Avenue in West Springfield. For Jeffrey Daigneau, who’s busy booking holiday parties at his restaurant, Lattitude, they’re just heating up.
“We’re getting calls now. We probably have 15 or 20 parties already booked,” said Daigneau, who spoke with BusinessWest the day after the Eastern States Exposition — which dominates his street and hinders business for two and a half weeks — ended its 2011 run. “We haven’t gotten many calls with the Big E going on, but our busy season really starts today.”
Other restaurant owners and banquet-facility managers are reporting the same. So far, they say, business is looking up.
“Many companies feel parties are very important,” said Joe Stevens, owner of Hofbrauhaus in West Springfield. “They want to say thank you to their people who have been with them year-round — and we’re grateful to have them.”
He noted that the majority of companies that have booked parties have returned. “They want this certain Friday, this specific Saturday; usually, as they’re leaving, they say, ‘see you next year,’ and we just put them in the books. 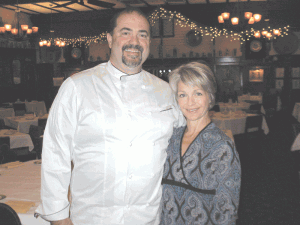 Joe Stevens, with his wife, Liz, says his holiday-party business at Hofbrauhaus has been bolstered by repeat customers.

“We’ve been blessed over the years because this place has been here since 1935, and most of our customers that have had Christmas parties over the years have stayed with us,” he added.
Newer venues are optimistic about a strong season as well, including Mill One at Open Square in Holyoke, which offers exposed brick, hardwood floors, and not much else in the way of permanent décor, allowing party planners to design their own night.
“It’s a beautiful facility from the 1800s,” said Michelle St. Jacques, property manager of Open Square. “It’s a blank slate, so we let people know that their event can be how they want it to turn out, without having the carpeting or wallpaper interfering with that.
“In addition, we have a selection of caterers to choose from, or you can choose your own, as long as they’re licensed and insured,” she continued. “We try to cater to individual wants. People can design their parties themselves in a very unique venue. They enjoy the fact that there are no set decorations that could interfere and conflict with their decisions. On the whole, people love it.”
For this issue, BusinessWest talks to several area dining facilities to get a feel for how they’re marketing the holiday season to area companies — and why they’re feeling good about the prospects so far.

They Shoot, They Score
“Right now, things are starting to pick up for the holiday season. We already have some bookings for December,” said Josh Belliveau, corporate event manager at the Basketball Hall of Fame.
That’s good news after a stretch of years in which employers across the U.S. have scaled back such late-fall, early-winter shindigs. According to Amrop Battalia Winston, a global executive-search firm that tracks a number of business trends, last year reflected the worst holiday-party slump in 22 years, with 79% of companies conducting some kind of celebration — lower than even the 81% figure recorded in both 2008 and 2009, at the peak of the recession.
Belliveau said it helps to be able to offer partygoers an uncommon experience.
“If you book your holiday party at the Hall of Fame, it’s a unique venue,” he said. “Our guests have many options — to tour the museum or do some additional fun things, like a scavenger hunt, shooting contests on center court, music, and dancing. We can even do [an electronic] sign outside the building, welcoming guests of that company. That makes it personal to employees who are attending. We think our facilities have the ability to provide that special atmosphere.”
Belliveau has booked a range of different groups, from formal sit-down dinner receptions to social receptions on the court, with hors d’ouevres, interactive play, and DJs and bands. “It’s a social atmosphere.”
Evan Mattson, controller at Tucker’s restaurant in Southwick, has seen the same variety of celebration styles.
“We do sit-down parties, we do station parties, we do buffets — we host all kinds of different parties,” said Mattson, adding that the facility handles gatherings of all sizes — “20 on up to 150” — and also conducts functions off-site when desired. Of all the options, he noted, “I think the station parties are becoming more and more popular.”
Stevens said there isn’t much Hofbrauhaus can’t do when it comes to party planning for groups ranging from less than 10 to more than 300. He noted that the facility hosts both formal sit-down services and cocktail parties with food stations and a cash or open bar.
“I’d say most people enjoy being served, getting waited upon, especially when it comes to the holiday season and businesses saying thank you to their staff,” he told BusinessWest. “Personally, I prefer a party where you can move around; I’m big into food stations and passed-around hors d’ouevres. I like to see people and circulate and not be confined to a certain table. But that’s just me.”
St. Jacques agreed, noting that many companies are getting away from sit-down dinners, and not just for budgetary reasons. “They realize there’s more interaction when people are getting up and getting food, passing by other guests, and that seems to be the trend, from what I’ve seen.”
She said Open Square is a good option for people who have very specific catering needs. “They can provide the food they like; some people like ethnic dishes and have to go to a certain caterer. You can’t get that at some facilities with their regular banquet staff.
“I think our venue is good because you can pick a theme and set the food choices,” she continued. “If you want to have an hors d’ouevres party, those are becoming popular. Cocktail parties are a nice holiday option without breaking the bank. That can be a good choice in this economy.”
Lattitude is making some improvements to enhance its party offerings, Daigneau added, including making the ‘wine room,’ where many functions are held for groups of 15 to 20, two to three times bigger; that renovation will be complete before the December rush of events.
But he said smaller parties are more common these days than large ones. “We do big Christmas parties, but what I’m seeing is parties of 25, 30.”

Looking Up?
That reflects the trends reported by Amrop Battalia Winston last year (this year’s survey won’t be released until November). In 2010, 28% of companies responding to the survey said their parties had become more modest — on the heels of the nearly half (49%) that downsized in 2009. Meanwhile, only 11% intended to hold more lavish parties.
In addition, company parties have increasingly become an employees-only zone. Only 26% of surveyed businesses planned to include family members, while 5% intended to invite clients and friends. The 69% of parties labeled employees-only was up from 52% just four years earlier.
Of those employers deciding to forgo having a party altogether, 55% said they did not consider it appropriate in tough economic times, compared to 27% who said a get-together just wasn’t within their budget. On the other hand, 37% of those having a holiday party said the primary reason was to celebrate a good year, 33% cited employee morale, and 29% said they wanted to project optimism about the future to clients and employees.
If holiday parties are, indeed, reflective of the economic mood, area restaurants and banquet facilities may be reporting some good news for the region overall.
“Some companies have done very well,” Stevens said. “Some have downsized their parties, but others have actually gotten too big for us; they can’t do their parties here anymore because they passed the 300 mark. It runs the gamut.”
Mattson said he’s optimistic about 2011 as well.
“They’re booking now. We have several booked already for December,” he told BusinessWest, noting that, even in a sluggish economy, many employers still want to thank their employees by making merry at what they hope will be the most wonderful time of the year.