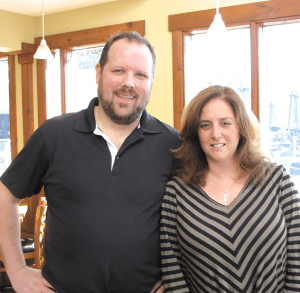 Debra Flynn owns two successful restaurants and knows her way around a wide variety of food. So what does she like to order when she eats out?
“My favorite food on the entire planet, when I go out, is Caesar salad and nachos. That defines a fun restaurant, and if they don’t have it, we’re not going back,” said Flynn, the owner of Eastside Grill in Northampton and part-owner, with Jake Perkins, of Sláinte in Holyoke.
“When we started,” she said of opening Sláinte earlier this year, “I told Jake we have to have the best nachos in the world — and they are.”
If those nachos —  loaded with toppings and also available ‘cowboy style’ with barbecued brisket — don’t sound like something Eastside would serve, that’s intentional.
“We’re not trying to be something we’re not,” Flynn said. “We’re not a high-end restaurant, and even though we’re attached to Eastside, we didn’t want Eastside food here. To have two restaurants within 10 minutes of each other serving the same food serves no purpose. I wanted this place to have its own identity, but people realize we believe in concepts like quality and service at both places.”
Sláinte (pronounced ‘slahn-cha,’ an Irish greeting meaning ‘your good health’) opened on the site of the former Eighty Jarvis restaurant, which used to be O’Meara’s, which used to be Broadview — which is where our story begins.
Flynn was in her early 20s when she first discovered Broadview on her first date with her future husband, Kevin. Perhaps because of that emotional connection, she had long had her eyes on the property, and when Eighty Jarvis closed, she felt the time was right to make a move.
“I was approached because someone knew how much I really wanted this property,” she said, but she wasn’t prepared to go it alone, so she turned to Perkins, her executive chef at Eastside Grill. “I knew how much Jake wanted to go on to the next level. And I felt comfortable with him; he has the same values I do when it comes to work.”
“We do work well together,” Perkins added. “We have slightly different styles, but they mesh well.
“We wanted a fun, comfortable place,” he continued, “and I really liked the idea of having a banquet room upstairs for parties. We don’t have the space for it at Eastside, but here we have a huge room up there.”
Downstairs, he added, “we keep it comfortable for everybody. It’s a lot of fun, and we want the food to be approachable and the atmosphere to be comfortable. It’s a good spot.”
Despite the name, Sláinte is not an Irish restaurant, he noted. Rather, “it’s an homage to the Irish heritage of Holyoke.”
Flynn laughed when the pronunciation issue arises. “Some of my friends call it Slanty — ‘hey, we’re going to Slanty tonight,’” she said. “But I don’t care, as long as people come.”

American Style
So, what is the menu like? Favorites range from appetizers like fried pickles and cod fritters to entrees like fried chicken, lamb shank, filet mignon, with a selection of burgers, sandwiches, and salads thrown in for good measure.
“Everything is made from scratch here,” Perkins said, from appetizers to desserts, salad dressings to pastrami.
“We use pork belly for bacon — everything is cured from scratch. There are no processed foods here,” Flynn added. “You’re not going to get processed pastrami or turkey here.”
Besides the fresh food, Flynn and Perkins are aiming for a certain casual vibe, not unlike that of the old Broadview. “It was fun — great wings, great sandwiches … it was a great place to go, a place where everyone went in Holyoke, where everyone knew everyone,” Flynn said.
With that in mind, “we were going for a warm, inviting feeling. We added more TVs so people can watch sports, any type of sports. And we have a 60-inch TV outside so they can be outside and watch TV, too.”
Flynn said the outdoor patio and bar is “to die for,” and bands play there on Wednesday and Sunday evenings during the warmer months.
But she and Perkins are equally proud of the upstairs banquet facility, which holds up to 100 people for cocktail parties and sit-down dinners. Sláinte has hosted baby showers, rehearsal dinners, and a host of other parties, including one wedding reception. The space is also ideal for breakfast meetings, and is equipped with audio-visual equipment for business functions.
“We’ve had surprisingly brisk business upstairs,” Perkins said. Flynn added that her connections in Northampton and Springfield — where she was general manager of Café Manhattan and the Colony Club earlier in her career — certainly haven’t hurt.
“It has been overwhelmingly successful. I was not expecting it to be as successful as it is this soon — it’s only been six months,” she said. “People remember me from the Colony Club and Café Manhattan.”
A location that effectively straddles Hampden and Hampshire Counties, just two minutes from I-91, doesn’t hurt, she added. “And the Northampton business community has been extremely positive in this new venture. A lot of people were like, ‘are you sure you want to do this? Why take on so much more work?’ But they come out and support me by coming here — I’ve had a few events from Northampton here.”

City on the Rise
Perkins said the goal has been to create an inclusive environment that draws customers back again and again. Flynn said she’s happy with business so far.
“I want to say it’s because of our quality and the service we provide and the friendly atmosphere,” she told BusinessWest. “That’s my philosophy. That’s the way you keep them coming back.
“This business is not about us; it’s about the customer,” she added. “You can never think it’s about yourself; you have to listen. It might pain you, but you have to listen and do whatever you can to make people happy, because if they’re not, they won’t be back.”
She and Perkins both live within a half-mile of Sláinte, and they believe they’ve opened a restaurant and banquet hall in a city that’s clearly on the rise.
“I’m proud to be in Holyoke. I believe Holyoke can come back,” she said. “It has a lot of the same qualities as Northampton, and the architecture is gorgeous.”
Added Perkins, “as businesses move into town, that’ll bring even more businesses in, and it kind of builds on itself.”
“We want to help set the tone,” Flynn continued, “so people say, ‘if they can do it, we can,’ and people will start to say, ‘wow, Holyoke has a lot to offer.’ Look at Northampton in the late ’70s and early ’80s, and look at it today. It can happen. You’ve got to believe it — and work hard.”
She said Eastside benefits from the walkability of its downtown Northampton location, where the streets teem with pedestrians. But Sláinte has its own advantages. “We’re right off the highway, and the people of Holyoke have been very supportive of us,” Perkins said. “It’s been fantastic.”
Flynn agreed. “We’re part of two really great towns. How lucky are we?”

The Push for Corporate Sustainability