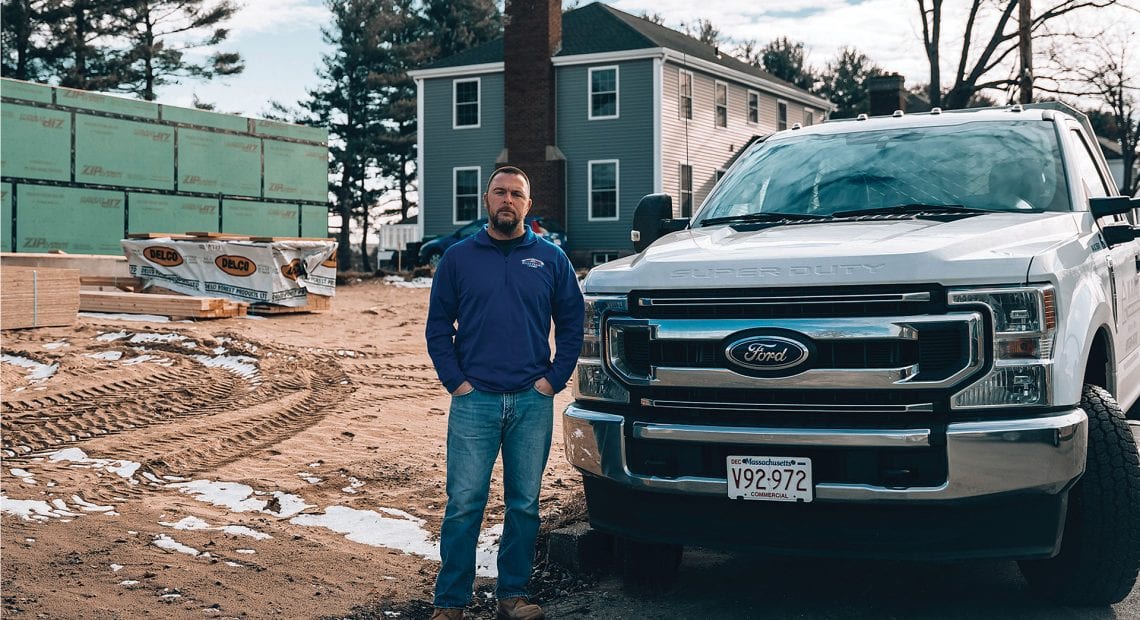 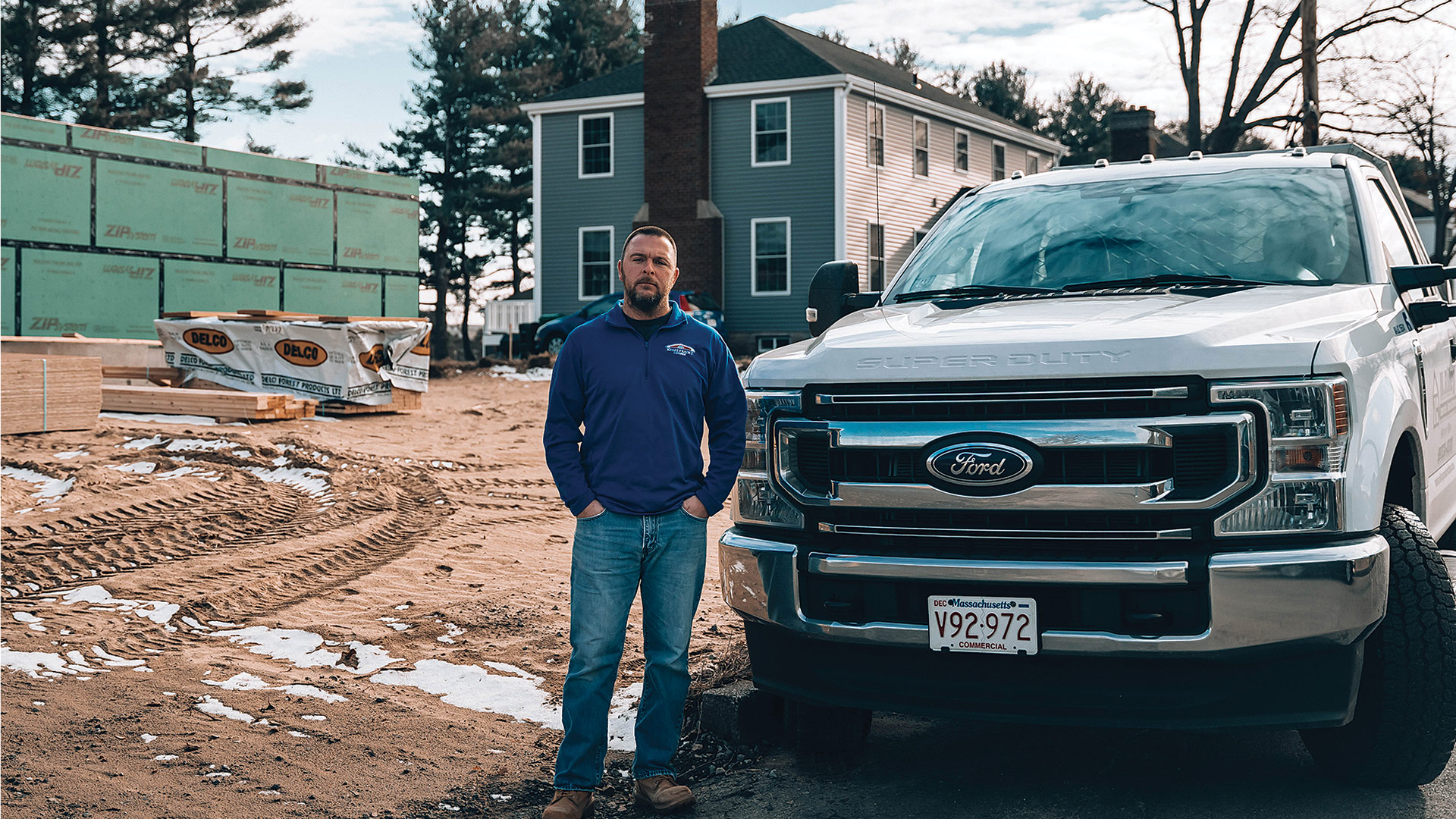 Nick Riley says he had to reschedule in-home jobs at the start of the pandemic until he could figure out how to do them safely.

For home builders in Western Mass., 2020 brought opportunity and challenge in equal measure.

For example, Nick Riley, owner of N. Riley Construction, said 2020 was his best year based on the number of projects, but COVID-19 posed obstacles to nearly all facets of the job. In fact, when the pandemic first arrived, he rescheduled all his in-home projects until he could learn how to safely do those jobs.

“We were fortunate that we had several new construction projects that kept us working until we could figure out the right way to get our in-home jobs done,” Riley said.

Other home builders shared similar stories of adjusting to a new reality on the fly.

When many industries were mandated to stop working back in March, home builders were deemed an essential business by Gov. Charlie Baker’s administration. That was the right call, said Bill Laplante, president of Laplante Construction. “We had projects with critical work that needed to be completed so people, in some cases, could get back into their homes.”

“We had to postpone jobs like kitchen renovations where people were still trying to live in the space we were working on.”

The builders who spoke with BusinessWest all construct new houses as well as additions and renovations to existing homes. On balance, they say, renovations and additions account for more business than new home construction.

“Most of the calls we get are from people who want to stay where they are, so many of them are looking to build additions or do a renovation,” said A.J. Crane, partner at A. Crane Construction.

Of course, staying put became nearly universal as COVID-19 mandates resulted in many people working from home. Even those who continued to work at their place of business found themselves at home more often because so many recreational activities and destinations had been curtailed or shut down.

And that posed opportunity for builders. As Laplante observed, the more time people spend at home, the more looking around they do. “They start thinking about adding a room or renovating part of the house to make their space more comfortable.”

In the age of COVID, that means builders must approach job sites differently than in the past. For starters, more people — both adults and children — are likely to be at home while the work is getting done. While workers follow screening protocols before going into the home and wear PPE once there, Laplante instructs his crews to isolate the work area from the residents as much as possible. That’s easy to do for additions and outside renovations, but some work is just more intrusive.

“We had to postpone jobs like kitchen renovations where people were still trying to live in the space we were working on,” he said, adding that other projects were pushed off because customers were simply not yet comfortable with outside workers in their homes during the pandemic.

But enough homeowners were OK with their presence to generate a successful, if unusual, year for the home-building and renovation industry.

Keeping work crews and homeowners safe was only one challenge builders faced due to COVID-19. In a normal year, the process of getting a permit for a new home or addition is fairly straightforward. Builders bring plans to the appropriate municipal office and pick up the permit a week or two later. As COVID-19 shifted city and town business to e-mails and Zoom calls, it delayed the permitting process — in some cases, for months.

“When you go down the street to the local lumber yard to pick up a pressure-treated two-by-four and they don’t have any, it throws you for a loop.”

Meanwhile, supply-chain shortages of common consumer goods such as toilet paper and cleaning products marked the early days of the pandemic. The manufacturing supply chain around the world was disrupted for many building products as well. Riley said appliances and electrical components such as circuit breakers were often delayed by as much as three or four months. As another example, Crane learned that window companies were having trouble getting glass.

“As a result, we were only getting three-fourths of the windows we ordered for a job,” he said. “This created a delay that frustrates the homeowner and puts a big dent into our profit margin.”

In short, COVID-19 kept people at home, they wanted to improve their space, creating high demand for building materials at a time when many manufacturers were already experiencing delays due to the coronavirus, resulting in shortages. And in the wake of those delays, price increases followed. 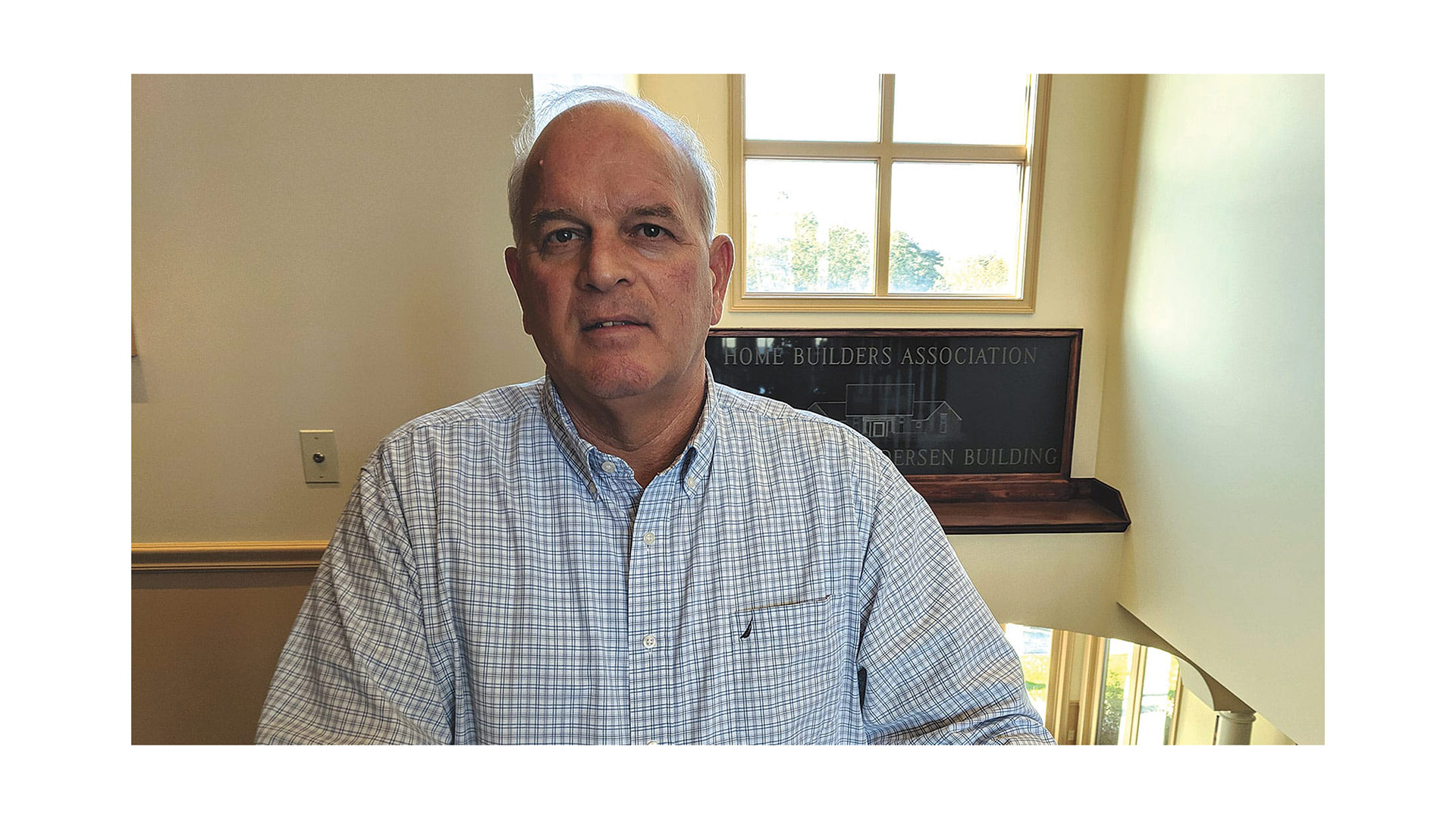 Andy Crane says he wants to present a home show this year, but only if he can do so safely.

“We saw a 45% spike in the cost of building materials,” Laplante said. “That was difficult to deal with because we had jobs that were already under contract.”

Shortages of special-order or custom materials were no surprise to the builders, but everyday items were affected, too.

“When you go down the street to the local lumber yard to pick up a pressure-treated two-by-four and they don’t have any, it throws you for a loop,” Crane said.

While they acknowledge that delays, shortages, and price hikes will be here for the near term, all three builders are optimistic about 2021. Because mortgage interest rates remain at historic lows, Riley does not expect a slowdown anytime soon. “For 2021, our company is operating full steam ahead for both new construction and remodeling projects.”

“I know a lot of folks who switched to remote work, and they are not going back into the office. I believe people working from home or their vacation home will continue into the foreseeable future.”

One challenge going forward, he noted, is finding property in Western Mass. to purchase at a reasonable price where he can make a profit on new construction.

For 2021, Laplante has plenty of new construction and renovation projects in the pipeline both in Western Mass. and on Cape Cod, where he recently opened a satellite office.

“We’ve always done work on the Cape, but this is the first year we made it official with an office,” he told BusinessWest. “We’re seeing a tremendous amount of activity and opportunity there.”

Expanding to Cape Cod is a bet Laplante is willing to make because he believes that the pandemic has severely shifted consumer trends. As he sees it, the people who would have sought out exotic travel to places like Europe are now spending their money on their home or investing in a vacation home close to where they live.

On with the Show?

For 66 years, hundreds of home projects started with a tour of the Western Mass Home and Garden Show held in late March on the Big E fairgrounds. In 2020, the show was canceled for the first time in its history as the initial wave of COVID-19 swept across Massachusetts just before the event.

Will there be a show in 2021? Andrew Crane, executive director of the Home Builders and Remodelers Assoc. of Western Massachusetts, faces a common dilemma in this time of COVID-19: there is plenty of interest in holding the show, but no one knows if conditions will allow it to take place.

“When things clear up and people can safely go out and stay healthy, we will run a home show, and not until then,” he said. At the same time, his organization, which runs the home show, has nearly sold out all available booths.

“We don’t even have dates for when the home show will happen, but I sold two booths this week,” Crane said, noting that his members are involved in nearly all areas of home improvements. As most of them had success in 2020, they would like to keep the momentum going this year. 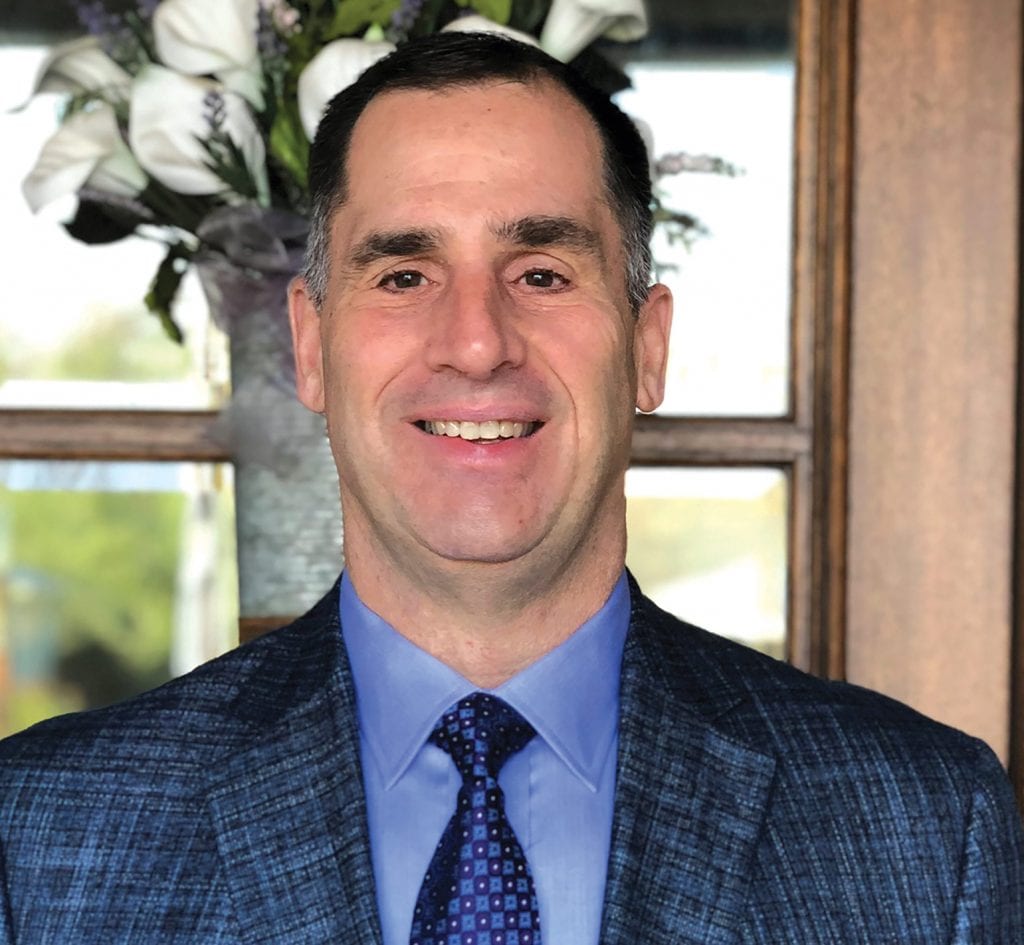 Bill Laplante says the more time people spend at home, the more they think about how to improve their homes.

When BusinessWest spoke with vendors in preparation for last year’s event, several said a key strength of the home show was the opportunity for people and contractors to speak with each other, as well as the ability to see and touch the latest products in home improvements.

Plexiglass dividers, one-way aisles, and mandatory mask wearing are among the different ways Crane and his staff are looking to configure this year’s show. He doesn’t want a situation, however, in which a member pays for an expensive booth only to allow one person at a time to visit.

“That’s not fair to the vendor or the people attending the show,” he said. “It’s not even fair to the folks who just drop by a booth to take the candy.”

Because planning events is so difficult these days, Crane continues to move forward in planning the home show, but understands that nothing is certain. “There’s a light at the end of the tunnel, but we don’t know if it’s a freight train or if it’s the vaccine coming to solve our problems.”

Even with an effective vaccination rollout, Laplante predicts the home-building industry will continue to thrive locally. In addition to new construction, he has several whole-house renovations in the works — projects in which an existing house is torn down and a new one is built on the same lot. With many projects in the pipeline, Laplante believes people have changed their behavior long-term, and the home will continue to be a focal point long after COVID-19 is under control.

“I know a lot of folks who switched to remote work, and they are not going back into the office,” he said. “I believe people working from home or their vacation home will continue into the foreseeable future.” 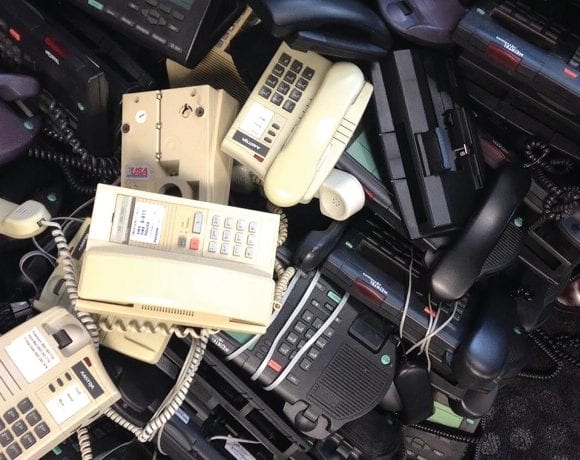