Six months ago, Ashley Cary of Ithaca, N.Y., a physician assistant student at Springfield College, settled into winter break after weeks of intense study and long hours at school.

It didn’t take long for the cabin fever to hit her.

“As a PA student, you’re always busy, you don’t have time to be bored,” she said. “I was sitting at home stir crazy and I said, ‘this is not for me.’ I knew I had to find something worthwhile to do during spring break.”

But Cary bypassed traditional options of tropical vacations and road trips, instead researching volunteer opportunities for college students online. Soon, she’d located an agency willing to work with her during a free week in mid-March, and a locale in desperate need of some help – New Orleans’ Ninth Ward, the site of the first levee break and the hardest hit section of the city devastated by Hurricane Katrina.

With a background in medical care, Cary knew she’d be an asset to the clean-up efforts, but she needed more hands on deck to make a significant impact. She approached her classmates, and soon a troupe of seven Springfield College students, all enrolled in the physician assistant program, had signed on with ACORN (the Association of Community Organizations for Reform Now). ACORN is a FEMA-funded agency, located in several metropolitan areas, which devised a new program after Hurricanes Katrina and Rita called the Home Clean-out Demonstration Program, one of many community-service and rebuilding efforts across the country.

One of the trip’s participants, Mike Russo of Chicopee, explained that plenty of work remained to be done in New Orleans. Physician assistants (PAs) are trained to provide diagnostic, therapeutic, and preventive health care services, as delegated by a physician. They also treat minor injuries, by suturing, splinting, and casting. But as soon as they entered some of the most ravaged neighborhoods of the city, he said the specific nature of the work they’d be doing became less important.

For five days, the students worked alongside fellow volunteers, hurricane survivors, and paid contractors to essentially rip out unsalvageable property and make way for new structures.

“Even as future PAs, not as much medical work was needed from us,” said Russo, “but we were called on to do what needed to be done. We gutted houses, cleaned up trash … that’s where the city is right now in terms of need — demolishing homes so they can be rebuilt.”

What’s more, the volunteer work was not so far off-track in regard to the students’ course of study. According to the American Academy of Physician Assistants (AAPA), which profiled the Springfield College project in its professional publication and Web site, all PAs and PA students are encouraged to seek ways to enhance the lives of individuals in their local communities and beyond, as part of their overall professional responsibilities. The AAPA even developed a formal campaign, the Joint Efforts campaign, centered on increasing involvement in national health-related and community-based initiatives.

Russo, who lived for a week in a tent city with his classmates and 400 other people, said the level of destruction in the Ninth Ward was quickly evident.
“It didn’t take long to realize that the pictures you see and the news stories you hear do no justice to what is going on,” he told BusinessWest. “Everyone is complaining that not enough is being done, but this isn’t small, this isn’t localized … essentially, there is no good place to start.”

He said the bulk of the students’ work was centered in the upper portions and the east side of the Ninth Ward, on the outskirts of the most badly damaged areas.
“Where we were, there were water lines six feet up the walls and beds flipped over in every room,” he recalled. “There were clothes everywhere and mold on everything. We took everything out of the houses, then we ripped the houses right down to the frames, the studs. That was all we could do, the damage was so extensive.”

But closer to the center of the ward, Russo said the outlook was even more grim.

“Directly inside the Ninth Ward, nothing was salvageable,” he said. “When we were there, bodies were still being found in attics. There was no work to be done – just bulldozers coming in, pushing everything away.”

Cary echoed Russo’s description of the city in its most badly hit sections.

“I hope that anyone who has extra time will schedule a trip to contribute to the relief efforts,” she said. “It’s amazing that this is part of our nation, and it looks like a third world country.”

After seeing the devastation and the number of workers and volunteers contributing to the clean-up, Cary said she’s mulling another trip to New Orleans, this time in a more formal medical capacity. Both she and Russo graduated this May, and are now entering clinical rotations that will last a year. After that time, they’ll both likely be certified physician assistants, and more able to provide comprehensive medical care to disaster relief workers.

“The damage that the hurricanes created is indescribable,” she stressed. “The clean-up won’t be done in five years; it won’t be done in 10. I’ll enter my rotations this year, and when I graduate I want to go back to New Orleans. For my next trip, I’m hoping I can provide health care for the workers.”

But Cary said she’s not averse to again abandoning her stethoscope in favor of a sledgehammer.

“We did nothing but demolish wrecked houses this spring,” she said. “I wouldn’t mind going back to help rebuild.” 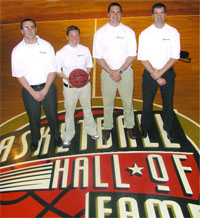