Echoes from the Past 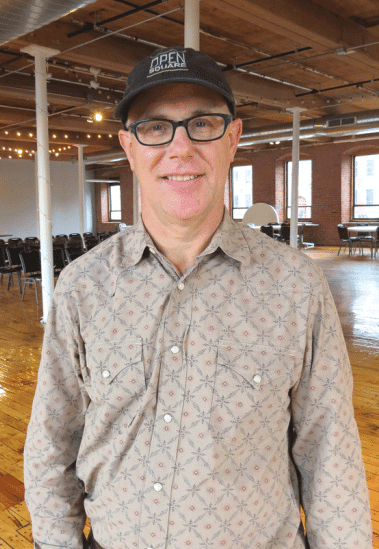 John Aubin says the space in Mill 1 at Open Square is modern, but also comfortable.

That’s the phrase attached to a genre of interior design, one that takes cues from old factories and industrial spaces — or uses such facilities themselves — and blends them with modern fixtures and furniture to create a unique working and playing environment that blends the past with the present.

That look and feel — which John Aubin, owner, developer, and chief designer at Open Square in Holyoke, also described with the phrases ‘accessible modern’ and ‘comfortable modern’ — are becoming increasingly popular with a host of constituencies. They include people in business, and especially those involved in creative work, who find such spaces inspiring and conducive to imagination and forward thinking.

And Aubin believes this helps explain why Mill 1 at Open Square, the meeting and event space he carved out of one of oldest mill buildings in Holyoke, has become popular not only as a wedding-reception site — there are 40 to 50 of those a year — but also as a place for strategic-planning sessions and other types of corporate gatherings.

“A number of major corporations have rented this space for brainstorming,” he explained. “They’ll rent it for anywhere from one to three days, and sometimes it’s as few as 10 people. They find it a very creative space; they’ll set up whiteboards and displays, and they’ll just brainstorm.”

Indeed, over the past several years, several regional and national corporations, including Hasbro, PepsiCo, and the New York City-based global design firm IDEO, have found Mill 1, said Aubin, who put extra emphasis on the word found. That’s because there hasn’t been much, if any, direct marketing of this space to the business community, and many who have chosen it have done so after Internet searches of unique meeting facilities.

A number of major corporations have rented this space for brainstorming. They’ll rent it for anywhere from one to three days, and sometimes it’s as few as 10 people. They find it a very creative space; they’ll set up whiteboards and displays, and they’ll just brainstorm.”

Overall, the Mill 1 space, which came online roughly at this start of this decade, has shown itself to be quite versatile, hosting everything from performances of the Enchanted Circle Theatre to Common Capital’s annual meeting; from the EDC’s announcement of the new branding slogan for the region (‘Western Mass’), to induction ceremonies hosted by the Volleyball Hall of Fame, headquartered just a few blocks away. Deerfield-based Yankee Candle has even used it as a staging area for a photo shoot involving its products.

“Around this time of year, late July, they shot their Christmas catalog here,” said Maggie Bergin, communications director for Open Square Properties. “It was weird … you walked in, and there was a living room and a den; they created little scenes, and they had actors and models come in, and they’d shoot people enjoying Yankee Candle products.”

This versatility is due to the fact that the space is, in many ways, like a blank canvas to be filled in by those who rent it out for a day, or two, or for just a few hours. In fact, there is an actual blank canvas in the form of a white wall, 11 feet by 40, at one end of the room. Companies have used it to project images such as charts with sales projections, and marrying couples have used it to post pictures that tell the stories of their lives. 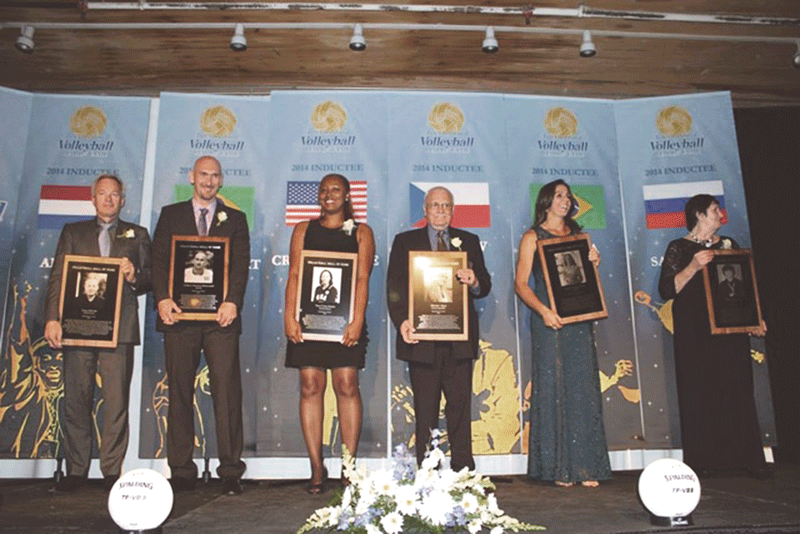 The International Volleyball Hall of Fame’s induction ceremonies have been one of many events and meetings staged at Mill 1.

“It’s a neutral canvas onto which people can apply their vision,” said Bergin. “Sometimes, a country-club feeling or something traditional works for businesses when it comes to conferences and social gatherings, but others want a more modern feel or something that isn’t already stamped with a particular look or feel. And I think that’s why we’ve had companies coming here for creative work with their staff.”

For this issue and its focus on meetings and conventions, BusinessWest paid a visit to the blank canvas that is Mill 1 to learn about the many ways that clients, and especially businesses, are coloring things in and thus bringing a new dimension to their corporate outings.

Weaving in Some History

When asked about the history of Mill 1 and, specifically, the space converted into a meeting and event facility, Aubin started by pointing to the floor — the one painstakingly refurbished and brought to an admired luster with the application of four coats of industrial-strength polyurethane.

“This was called the loom room; there were two holes in the floor where a belt looped through,” he explained. “And there were holes in the beam in the ceiling that held pulleys; the belts would loop up and back and connect to looms.

“There’s a loom room in Lowell that’s still active,” he went on, referring to the industrial city north and west of Boston that, like Holyoke, was a textile-manufacturing hub (paper making came later in Holyoke). “They have these massive machines with the original belts spinning; they give you earplugs, and the noise is deafening with earplugs — I don’t know how anyone could work there without them.”

The loom room at Mill 1 is quiet now, obviously, except during events, but there are echoes from the past that can be seen and felt. The brick walls, a foundation of the ‘industrial modern’ look, are obviously prevalent, and the many windows present views of today’s Holyoke, but also, and especially, its past, with mill buildings, canals, and the bridges over them coming into focus.

We chose Mill 1 at Open Square because it was a true taste of Holyoke’s history and a glimpse into what life was like back in the 1890s when Holyoke was heavy into manufacturing and volleyball just invented.”

The views at Mill 1 are a selling point, but it’s the interior space itself that draws clients, especially businesses like Pepsi and institutions like the Volleball Hall of Fame, said Aubin, adding that those two words, ‘industrial’ and ‘modern,’ coupled with the history that is so palpable, create a unique venue.

Consider these comments from George Mulry, executive director of the Volleyball Hall of Fame: “We chose Mill 1 at Open Square because it was a true taste of Holyoke’s history and a glimpse into what life was like back in the 1890s when Holyoke was heavy into manufacturing and volleyball just invented.”

This is what Aubin had in mind when he set about creating this space. Well, sort of.

The space inside what’s known as Mill 1 — then wide-open, not finished or polished — was being rented out on an occasional, informal basis, mostly for community-based endeavors and events, said Aubin. From these events, the team at Open Square saw considerable potential for a far more refined space that could host weddings and other gatherings and become an important revenue stream for the larger mill-redevelopment initiative. 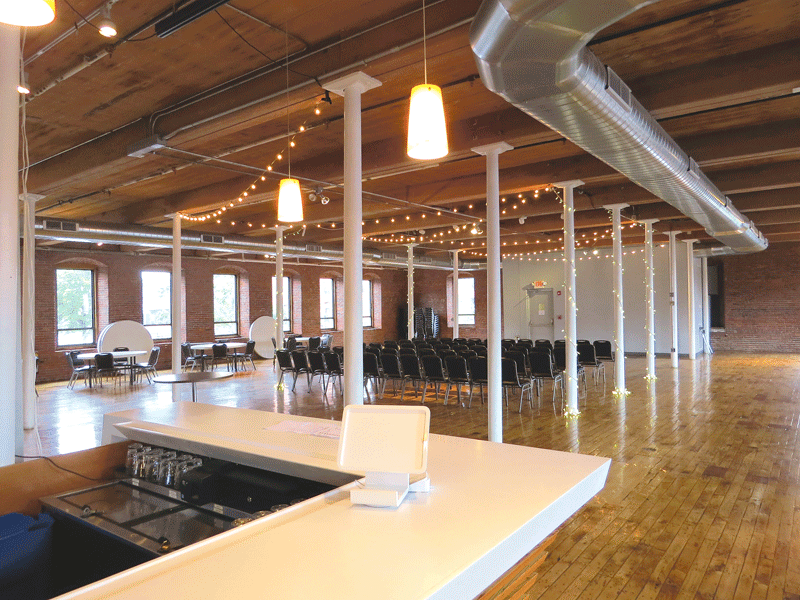 Mill 1, with its ‘industrial modern’ look, has become a popular site for companies looking to do some brainstorming.

“But we knew we needed to make a considerable investment in that space,” said Aubin, adding that one was made, and it has certainly given the facility that ‘industrial modern,’ ‘blank canvas’ look and feel.

Work was undertaken including refurbished floors, new glass in the windows, construction of an accompanying kitchen, and other facilities, such as a bar (designed by Aubin) that was fashioned from cypress wood used to make a water tower that once sat atop one of the mills in the complex.

Like the bar, the Mill 1 space blends old with modern to create an environment that resonates with people, said Aubin.

“It’s modern materials and a modern look, but it’s very comfortable to be in,” he told BusinessWest. “A lot of modern stuff looks great in pictures, but then people think, ‘if I sat in there, I’d feel like I was from outer space.”

The venue has certainly become popular with marrying couples — Mill 1 made BuzzFeed’s list of the 15 best wedding venues in the country for under $3,000 in 2015 — but, as noted, the business community is finding it as well.

And, moving forward, Aubin says there are a number of factors that should inspire more corporate business.

They include affordability and the uniqueness of the space, he noted, but also Open Square’s status as a zero-net-energy venue (actually, it produces more energy than it consumes through use of hydroelectric generators), a character trait that may resonate with environmentally conscious businesses and business owners.

And then, there’s accessibility, in the form of the train service that has returned to Holyoke after being absent for several decades. The Vermonter, a north-south line, stops in the town once a day, and the city’s new train station is only a few hundred yards from Open Square.

The service is limited, although it is due to be expanded in 2018, Aubin noted, adding that the train does make Holyoke and Mill 1 more accessible to companies in the Northeast corridor, including those in New York.

“We’ve already had some companies come up to do some photo shoots — it’s much less expensive to do that here than in New York,” he explained. “And we’re hoping that the train makes it easier for people to get to us.”

Aubin and Bergin both noted that there are many unique spots within the broad Open Square complex for wedding photos. These include the bridges and canals, the wide-open hallways on the office floors in nearby Mill 4, the brightly painted doors on some of the mills, the stairwells in those facilities, and many more.

And not only do marrying couples and their bridal parties find all of them, but they identify new ones seemingly with every ceremony.

This is what happens when the past and the present come together in ways that inspire optimism about the future and foster determination to turn dreams into reality.

It works for couples on their proverbial big day, and, increasingly, it works for companies of all sizes trying to generate some creative thinking.

This is the power of ‘industrial modern,’ and it certainly bodes well for Mill 1 at Open Square.

Holiday Gifts to Please the Business Professional or Customer