FieldEddy Strives to Grow Its Family and Strengthen Its Brand

Sam Hanmer says it was nothing personal, and certainly not a knock on one of the company’s early executives.

No, the decision to drop ‘Bulkley’ — as in Chester B. Bulkley — from the corporate name Field Eddy & Bulkley was taken in an attempt to shorten and simplify things, and also to help strengthen the brand.

The new name on the letterhead and business cards — FieldEddy Insurance — is what most people have called the company for some time anyway, said Hanmer, its long-time president. “When they did include Bulkley they would usually mispronounce it and come out with ‘Buckley,’” he explained. “And besides, it was a real mouthful for our receptionist.”

In dropping ‘Bulkley’ and the ampersand from the name over the door, the company is following the lead of law firms and accounting firms, said Hanmer, adding quickly that the change is one of the smaller, more cosmetic steps being taken in an ongoing brand-building endeavor.

Other, more significant steps include consolidating three offices into a recently constructed office complex at 96 Shaker Road in the center of East Longmeadow. There, FieldEddy occupies 10,000 square feet, and can operate — and communicate — far more effectively than it could in separate facilities in downtown Springfield, East Longmeadow, and Windsor Locks, Conn.

“Add up the square footage in the other three locations, and it’s a lot less than what we have now,” said Hanmer as he led a tour of the new facilities, “but we can do a lot more here because it’s much more efficient space; we can communicate much better because we’re all on one floor.”

‘More efficient’ and ‘better communication’ are words you hear quite frequently within this organization these days, as the company, which has been expanding through acquisition and organic growth in recent years, continues work to build and strengthen what Hanmer and partners Tim Marini and Michael Coffey all call a “network” of agencies.

Indeed, while the search continues for possible acquisition targets — “there are some potential opportunities we’re looking at and talking to,” said Hanmer — there are broad efforts underway to build the FieldEddy brand.

The new name and logo are part of this effort, as are some marketing initiatives, said Marini, but the bulk of the work involves taking a host of agencies now under the FieldEddy umbrella — Remillard Insurance in South Hadley was the latest addition — and making full use of the benefits, or clout, that this growing family provides.

Some of the agencies have been rolled into FieldEddy and have taken that name, while others, including Remillard, have kept their names because of the equity held in them. Whatever names they take, the individual agencies can now represent a large number of carriers, just one of the benefits of size gained through this network. And this presents opportunities during an intriguing time for the industry — one in which profound change in auto-insurance regulations enables consumers to shop for options as perhaps never before.

In this issue, BusinessWest looks at the continued growth of FieldEddy, the process of building a true network of agencies, and the strategic initiatives being taken to make that network wider and stronger.

As he referenced the auto-insurance reform steps taken recently, which shift the state from what was a fully regulated system to something called ‘managed competition,’ Hanmer did so rather reluctantly. So much has been said and written about the changes he was getting tired of hearing himself talk about it.

But he did say that most of the marketing and branding initiatives taken by the company have come in direct response to those changes — which have brought new carriers into Massachusetts, such as Liberty Mutual — and in an effort to capitalize on all those opportunities they present for companies with the requisite wherewithal.

“The good news is that we’re big enough to have multiple options for customers,” he said, adding that, through this strength in numbers, coupled with more-aggressive marketing, which has been an industry-wide trend, the network has added significantly to its books, or book of business. “We’ve certainly had an increase in opportunities, and we’ve come out on the winning side in a lot of those, if not most of those.”

And there could be many more of these triumphs ahead as competition increases, which all observers expect it will, and consumers gain still more options.

“Smaller agencies are going to have a very difficult time if they can’t offer more than one or a few options to consumers,” Hanmer explained. “And it’s only getting worse for them as it gets better for the customer.”

Summing up the events and the initiatives of the past 18 months or so, Hanmer said they were efforts to make FieldEddy stronger, or much stronger, as the case may be, than the sum of its parts.

And there are many parts.

These acquisitions were all part of a broad, five-year strategic plan for the company which Hanmer formulated in 2003, that called for tripling sales from $30 million to $100 million. While FieldEddy is closing in on that goal — the Remillard acquisition brought it much closer — Hanmer admits that the bar has been moved much higher than its original height.

Which is why he continues to search for acquisition opportunities, and why the firm embarked on his brand-building, network-building campaign.

“Historically, we had run those agencies we acquired as separate and distinct operations, with FieldEddy mostly staying behind the scenes,” he explained. “By identifying ourselves as a network of agencies, we can better serve our customers, who will know that they can go to any one of those locations and receive the same services and options.”

Marini agreed. “Some of what we’ve done is a bit of a reaction to the auto-insurance reform, but it’s basically good, common sense,” he explained. “This gives us the opportunity to put all our carriers in each office; in the past, we would buy an agency and essentially leave it alone with its carriers and sprinkle our carriers in a little bit.

“Now, we have all our carriers in all our locations,” he continued, “so that every customer has options, and plenty of them.”

And these options are adding up to growth opportunities for the network, he said, referencing recent performance, not only with auto insurance, but across the board in both residential and commercial lines.

He attributes that growth not merely to the availability of options for consumers, but also the incorporation of the FieldEddy culture, which is grounded in strong customer service, in those agencies that have been acquired.

Moving forward, the company intends to capitalize fully on the many assets present in the FieldEddy network. This includes, said Coffey, the names and the people behind those agencies that have been acquired, the benefits that come with the size and flexibility gained over the years, and even what the partners call a unique demographic advantage in its staff.

Elaborating, Marini said FieldEddy has a number of women working in the field and behind the scenes — a percentage of the overall staff that is much higher than industry norms.

“It wasn’t anything we planned — our strategy has always been to hire the best people available,” he explained. “But now that it’s happened, we can see it’s a great asset for us; we’ve seen a very favorable response from the marketplace because there’s a lot of women-owned businesses out there.”

The space at 96 Shaker Road provides room for further expansion, said Hanmer, who told BusinessWest that he expects this to happen, both through more organic growth and additional acquisitions.

“We don’t stop when enough is enough,” Hanmer of the company’s growth spurt and the prospects for more of the same. “There are a few acquisition opportunities that we’re talking about, and we will continue to be very inquisitive, to say the least.”

Recent expansion efforts have taken the company further east from its roots, into the Quaboag region, and south, into Northern Conn. The next step could be to go farther east in Massachusetts, to the Worcester area and perhaps beyond, said Hanmer.

The name FieldEddy isn’t known there, he acknowledged, but given the options it can present to potential customers, “we can make it known, and quickly.”

For the record, the ‘Field’ in the company name is Henry Field, a prominent Springfield businessman who, in 1925, put his name and that of partner Schuyler Eddy on a venture that could trace its roots to the start-up of the Springfield Fire and Marine Insurance Company in 1849.

Chester Bulkley, a graduate of Yale University and the brother of James Bulkley, a founder of the Springfield law firm of Bulkley, Richardson and Gelinas, would soon join Field and Eddy in the business.

Hanmer told BusinessWest that, while Bulkley is now longer on the letterhead, his contributions to the company have certainly not been forgotten. His name was dropped in one of many steps, small and large, to help build and strengthen what has become an insurance network, one that has made continued growth its main policy. 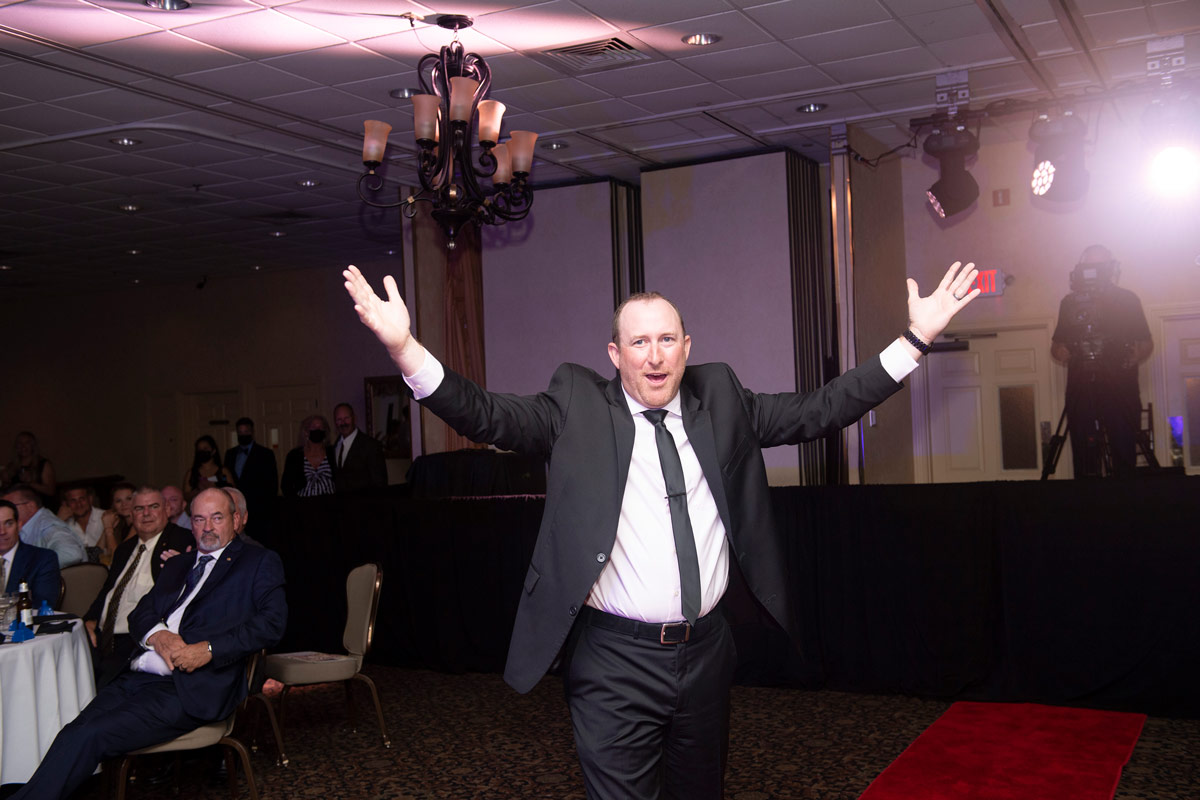