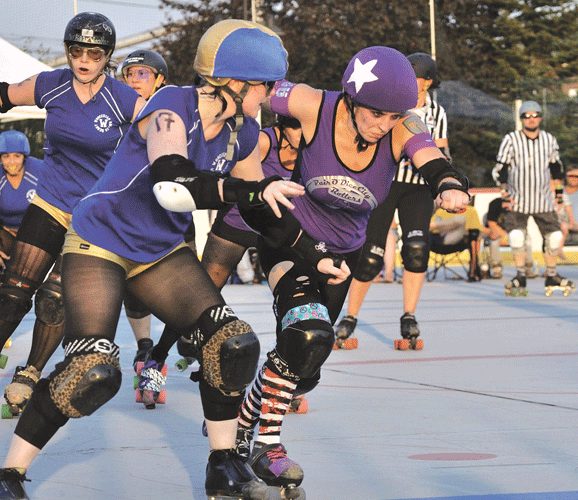 For Some Businesswomen, Roller Derby Has Become a Big Hit 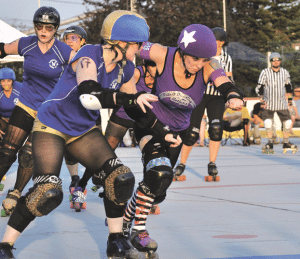 The women competing in the growing sport of roller derby say the benefits are many, from camaraderie to hard work to empowerment.

That’s how she chose to describe her introduction roughly four years ago to the sport of roller derby — no, not that roller derby that Baby Boomers would remember watching on their Zeniths in the ’60s and ’70s, an activity that was more stage production than actual sport.

This is so-called flat-track roller derby, said Rhodes, and it’s real, and she and other members of an outfit called the Pair O Dice City Rollers (they broke off from a squad in Northampton, hence the name), have the bruises to prove it. But they also have some other things as well, she told BusinessWest, listing everything from a heightened sense of empowerment to the camaraderie that comes from both going into battle and the hours of practice and scrimmaging it takes to be ready for a bout.

“It’s a great sport because, in roller derby, everybody matters — it’s a total team effort,” said Rhodes, the team’s captain, who by day owns a pottery studio in Northampton and still works part-time at Webs America’s Yarn Store in Northampton, but when she puts on her skates becomes ‘Halle Pain Yo.’ “It really empowers everyone and gives them way more self-esteem than before they started.”

Words to this effect are being spoken by a growing number of women, from across many sectors of business and levels of entrepreneurship, who have discovered or rediscovered this sport in recent years. Some are invited by friends who have already learned how to hit and be hit, while others see the ads for something called ‘Fresh Meat Recruitment Night’ and show up, usually having no idea what they’re going to find.

Greta Shaver falls into the former category. She’s a sales associate and website assistant at Webs, who took up Malea on her invitation to check out roller derby. That was two years ago, and she’s still at it, serving the Rollers as a blocker or the player designated as the ‘swing,’ a more versatile blocker. “The swing’s job is to do everything in her power to get in the other team’s way,” she explained. “When I’m on the track, I’m looking around and usually trying to hit everything that’s not in a purple jersey.”

Meanwhile, Katie Stebbins is in the latter group.

“I showed up to fresh-meat night never thinking that I would love it almost as much as my children,” she joked. “I went to see what it was all about and how legitimate it was, and from the very first night when I hit the track and met the women and saw the seriousness they brought to this, I was hooked. I was completely hooked.”

Elaborating, Stebbins, who spent a decade working as a city planner in Springfield and currently has her own consulting firm as well as an online publication (more on that later), originally looked at roller derby from purely an economic-development standpoint. “My first reaction wasn’t necessarily that I wanted to skate for them; it was ‘what a great economic-development opportunity this is for the city — here’s this fast-growing sport that’s all over the world, and Springfield has a group of women dedicated to developing a team for the city.’”

But she’s passed the first two levels of training needed to get into game action, and is now anxious to hear her playing name (Springfield 413) heard at one of the Rollers’ tilts.

Her first opportunity may come on Feb. 17 in a game against the Baystate Brawlers, out of Worcester, at Interskate 91 South. Like other contests, this one will benefit a specific charity, still to be chosen. Previous bouts have benefited groups and causes ranging from the Westfield Boys & Girls Club to activities involving area Shriners, to something called Stupid Cancer, a nonprofit group that supports young adults battling the disease.

“There are many programs for kids battling cancer, and quite a few for older people, but not much for those in between, so we did something for them,” she said, adding that games have been attracting about 200 spectators on average, and she anticipates that this number will go up as the sport continues to gain acceptance.

For this edition and its focus on Women in Business, we take a break from the traditional issues and challenges facing this constituency and talk at length with some roll players — puns and plays on words are huge in this sport — about some of their greatest hits. 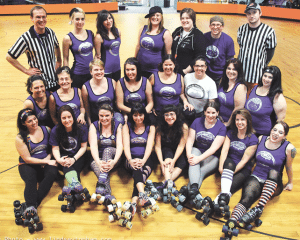 The Pair O Dice City Rollers draw women from all walks of life who are up for a challenge — and a good time.

The playing names on the Pair O Dice City roster speak volumes about the mindset of those who play this sport — or at least about their efforts to intimidate the opposition.

There’s ‘Reckless B Havior,’ ‘Eve N. Meaner,’ Olive R. Twisted,’ ‘Meryl Creep,’  ‘Donny Brook,’ and ‘Killer Krush,’ among others. Stebbins acknowledged that ‘Springfield 413’ probably won’t scare anyone, but she took that name to convey her passion for the City of Homes, not frighten the other team.

“My derby name is ‘Springfield,’ because I’m doing it for the city and for myself,” she explained. “Plus, Springfield’s a pretty badass city with all the natural disasters it’s had.”

Choosing a roller-derby name is maybe the last thing Stebbins thought she’d be doing as she navigates her way through life in her early 40s, but she’s certainly not alone with that task as the sport continues to pick up more participants and fans.

For those not familiar with the sport — and there are still many in that category — roller derby is played by two five-player teams skating in the same direction around a track. (The tracks used to be banked decades ago, but they are flat in most cases now). Games, or bouts, consist of a series of short matchups called ‘jams,’ during which a team’s designated scorer, called a ‘jammer,’ will attempt to lap the opposition.

Players on the track essentially play offense and defense at the same time — helping their own jammer while opposing the other team’s — although some play more of one than the other.

For each of the nearly two dozen people on — or nearly on — a Pair O Dice City roster, there is a different story about just how they came to be involved in this unique sport and its current resurgency worldwide.

Malea remembers watching the movie Whip It — which is about a teenager who joins a roller derby team, but Malea saw the poster featuring a girl in a helmet and figured it was about horseracing — and seeing a good deal of herself in one of the characters.

“Three-quarters of the way through the film, one of the main characters makes this comment, ‘I’m 36, and this is the first thing I’ve been good at,’” she recalled. “I’m 38 now … I thought that was pretty cool, so I put on some skates and went skating with some friends to make sure I still could, and later I saw a flyer to join roller derby.”

She told BusinessWest that roller-derby leagues — and there are now several of them across the region — are attracting a diverse mix of women of all ages, many of them professionals. When she first got involved with the Northampton team, there were a few lawyers, some nurses, and several schoolteachers on the roster. At present, the Rollers roster is most dominated by teachers and librarians, she said.

They will play several bouts over the next several months against teams from Maine, New Hampshire, and other parts of the Bay State.

Turn for the Better

Stebbins certainly wasn’t thinking about joining the ranks of those who are taking up the game when she saw the notice for fresh-meat night. Indeed, she was already juggling a few different career ventures.

One is her consultancy business, which currently involves a contract to be the project manager of Holyoke’s fledgling Innovation District. In that capacity, she manages the various opportunities involving economic investment around the Massachusetts Green High Performance Computing Center, which opened its doors late last fall. “I’m working with others to make sure that center isn’t an island, but is instead relevant to the rest of the community.”

And then, there’s her online publication, called byofamily.com, which Stebbins calls a “parenting lifestyle e-zine” focused on Holyoke and Springfield. She cashed out her retirement account to get it off the ground, but has never looked back.

“It’s Springfield’s first lifestyle magazine for families,” she explained, adding that it has enjoyed steady growth since it was launched nearly a year ago. “It’s not, ‘you should love Springfield; don’t be afraid of it’ — it’s not hit-you-over-the-head stuff. It’s 15 articles a month about people raising their families in Springfield and Holyoke.

“Being an entrepreneur is a pretty exciting adventure,” she went on. “I have ambitions to expand the magazine into Worcester and Albany, and eventually move it into several post-industrial cities on the Eastern Seaboard and then west.”

Stebbins never imagined adding at least two nights of roller-derby practices and scrimmages a week to what was an already-crowded schedule, but she found herself drawn in by the sport, its team atmosphere, the camaraderie, opportunities to compete, and even the hitting.

“I went from thinking, ‘I want to help this team become a part of Springfield’s economic-development future’ to ‘I want to skate for this team,’” she told BusinessWest. “I’ve never played team sports before like this, so it was whole new experience — working together as a team to accomplish a common goal.”

“I was a little intimidated at first, because sometimes you walk in and see a bunch of girls who look really tough,” she explained while recalling her first encounter with the sport and those who play it. “However, it turns out, when you join a roller-derby team, it’s like joining a family of 30 or 40 people; everyone is really supportive of one another, and that’s one of the big reasons why I’ve stuck with it for more than two years now and have no intention of stopping anytime soon.”

Elaborating, she said she graduated from Smith College, a women’s school where there was an “intense atmosphere of sisterhood,” something she missed after getting her diploma. Roller derby fills the gap in many ways.

“I really enjoy having a close-knit group of female friends who really support one another,” she explained. “We play hard on the track, we play hard at the after party, and we just have a great time.”

Taking It on the Shin

Shaver told BusinessWest that Rollers players and others who have taken up the sport usually make sure to tell family members, co-workers, the boss, and anyone else they’re close to just what they’re up to.

Doing so helps explain bruises, assorted injuries, and other things that can happen to the body, she said with a laugh.

“One time, a friend got hit in the face, and she had to go into work with a shiner,” Shaver explained. “All you have to do is say ‘roller derby,’ and people get it.”

Saying those two words means much more to those who have discovered this fast-paced activity, who now enjoy a good track record — in more ways than one. 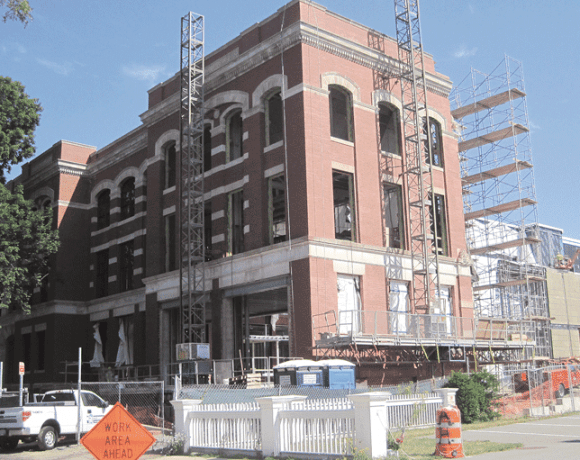