At AXiA Insurance, Creating Value Is the Rule — Literally 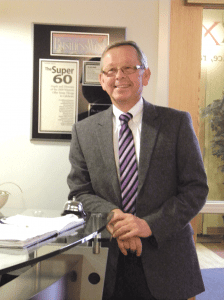 Everyone who works for Michael Long follows what he refers to as his “Always Rules.”

They are part of a vision he created long before he opened AXiA Insurance Services Inc. and are the cause and reason behind the laughter that peals frequently from meeting rooms and cubicles in his Springfield headquarters, the smiles on the faces of employees, and the myriad perks, rewards, and awards they receive that range from engraved crystal wineglasses and decanters to unusual birthday gifts they are given at employee-appreciation events.

Their happiness translates into superb customer service, which falls precisely in line with Long’s belief system. “You can’t create value for your customers if you don’t create it for your employees first,” he said, explaining the reasons behind the eight rules he originally created and two he added later.

“I had been in the insurance business for 30 years before I launched this company, and during that time, I saw many valuable employees leave,” he said. “So I realized, if I wanted to be the best agency — not necessarily the biggest — I had to train my employees well and create an environment where they felt valued.

“I consult with my employees about where the agency is going and what is coming next. I also allow them to map their own careers and chart their own destination,” Long went on, adding that he posts the courses and/or certifications needed to move from one position to another and gives employees paid time off to get the education they need to move up in the company.

“What difference does it make to my employees if I am doing well, but they are not moving up with me?” he asked rhetorically. “People want to know what will happen to them.”

The majority of employees work four days a week on a rotating schedule, although they can work five instead if they prefer to do so. But longer workdays result in benefits to clients because it allows AXiA to be open from 7:30 a.m. to 6 p.m.

There are also three ‘snow teams,’ and if there is a blizzard, two of the teams can work from home. In addition, every employee is given two paid days off to volunteer for any charitable organization they choose.

Long’s belief that employees who feel appreciated provide better customer service has led to measurable success, and he has achieved every goal he outlined in the 10-year plan he created before he opened his full-service insurance agency in October 2001. “We’ve averaged more than 15% growth every year,” he said.

AXiA began as a one-man operation in a rented room in Market Place in Springfield. Today the business has 32 employees in six locations that include Springfield, Easthampton, Natick, North Kingston, R.I., and two offices inside MassMutual.

Long makes it a point to understand his employees’ strengths and weaknesses and avoids delegating any duty to an employee that he or she doesn’t truly enjoy or excel at.

“I’ve seen agencies that failed and others that were very successful,” said Long. “But I also saw many skilled and talented people fail because they were told to do things they were not good at. They should be allowed to become great in the areas they enjoy.”

He learned this lesson as a child and said it remained with him as he matured. Long said his mother and teachers did so many things to try to improve his poor spelling that it robbed him of time that would have been better spent focusing on subjects he enjoyed.

“So, what I bring to the table is a different view. I believe everyone has unique abilities, so I try to structure job duties so people are using those abilities,” he said. “The things they don’t do well are passed off to someone else who is great at those tasks and enjoys them.”

Long said the rules he created and the happiness of his employees has a direct relationship on the way customers are treated. A positive attitude must start at the top, he said, as he listed his rules, which are:

“These principles allow us to provide the best service possible at the best price,” Long said, noting that, whenever the cost of someone’s insurance policy goes up by 10% or $100, they are contacted and given alternative options, which is possible because AXiA represents 20 insurance carriers.

Agents also analyze each client’s policies on a regular basis. “Customers are not insurance experts, and sometimes people are paying for things they don’t need, but lack coverage in other areas they should have,” Long said.

He told BusinessWest that the company began conducting annual team reviews for commercial clients two years ago to make sure their policies do not have any gaps or overlaps. They also do a full review of each personal insurance policy every two years, and clients receive a letter about any areas of concern, which are typically sent via e-mail.

“We have 80% of our clients’ e-mail addresses; the average in the industry is only 20%, and we also text information,” Long added. “It’s very important to our clients to communicate with them this way because they are busy.

“But everything we do comes back to my theory and the name of the company,” Long said, explaining that AXiA is a Greek word which translates to “value, capability, merit, worth, and worthiness” in English.

Director of Operations Alana Sambor said the approach makes a difference. “We have already reviewed the policies of more than 2,500 of our clients this year,” she said. “We want to make sure they have the right coverage at the right price, and we publish information we think they need to know.” 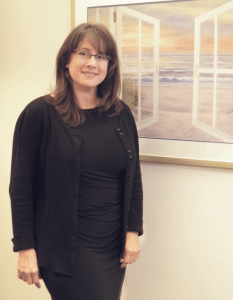 Alana Sambor says AXiA goes out of its way to regularly review clients’ coverage to make sure it reflects their needs.

One thing Long believes sets AXiA apart from other insurance agencies is its approach to new clients. “We don’t just ask to see a copy of their current policy and provide them with a quote,” he said. “We analyze it and ask them a series of questions, such as whether they own more than one piece of property, then come back with a report or recommendation about how their policy should look. It’s not an apples-to-apples quote; it’s based on what the person really needs.”

For example, a person may have a $250 deductible on their homeowner’s insurance policy. “But since it’s unlikely they will turn in a small claim, we may advise them to take out a larger deductible and purchase other coverage for things such as backed-up sewers or drains with the money they save,” Long said.

The company also continuously works to improve communications with clients. Two years ago, AXiA put an emergency phone number in place so customers can contact a representative 24 hours a day, seven days a week. “And we are looking at creating a mobile app as well as an interactive website, which we hope to launch next year,” Long said, explaining that it will give clients instant access to their claim history and premiums, so they can see what they paid for a policy years ago.

The new website will also allow commercial clients to issue certificates of insurance for themselves around the clock by logging into the system. “Many contractors, who range from painters to landscapers to truck drivers, need a certificate when they arrive at a new job site, and they often start work at 6 a.m., before we are in the office,” said Sambor. “We have had truck drivers who found they couldn’t leave California without a new certificate, which can be problematic due to the time difference. This will allow them to print whatever they need, any time of day or night.”

Long promotes his company by having the name AXiA emblazoned on special vanity license plates that are issued to all of his employees. He also purchases shirts, sweaters, and other articles of clothing that display the company name and logo.

But he believes it is his positive attitude and the gratitude passed on to clients by satisfied employees that most accounts for his growth and success.

Sambor noted the company is growing so fast that it interviews at least one new job applicant every month, but added they are very choosy about who works for them.

In fact, before Long hires someone, he spends a great deal of time making sure he or she will fit in well and comply with the company’s rules. “We always want to do what is right for the customer, so our employees must show up on time, finish what they start, and say ‘please’ and ‘thank you’ to every client,” he said.

“When I began my company, I laid out everything that I wanted to do for clients and told prospective employees about my value plan, and the majority of them are still with me today,” he went on. “But it’s a fast-paced environment, so we screen candidates carefully.”

That extends to making sure their unique abilities fit the role they will play in the business. “For example, our receptionist is not only very pleasant, she has real empathy for people. It’s important because she is the first person people talk to, which sets the stage for further transactions,” Long said.

Sambor agrees. “The atmosphere at AXiA makes it a place that is fun to work at, and even the small perks, such as a hot cookie machine and cappuccino/espresso machine, make a difference to employees. We spend more time together every day than most people do with their families, so we need to enjoy our jobs,” she said. “We have a team-oriented environment, and if one person is struggling or engrossed in a project, another person will cover for them while they complete what they need to do.”

Long also publishes jobs on the company website that don’t yet exist, but will be available in the future, as well as pay grades and levels so people know how much money they can expect to make as they advance through the ranks.

He feels that’s important because it helps him retain employees. “I sit down with each of my employees once a year and go over their individual goals,” he said.

The company is dedicated to going green, which has provided employees with additional perks and also resulted in benefits to clients.

“Eight years ago, we began going paperless, so we don’t have rows and banks of file cabinets. We e-mail policies to customers, unless they ask for a hard copy, and we plan to install solar panels in the building,” Long said. He added that allowing employees to work four days a week provides additional fuel savings and reduces emissions.

The company also recently began giving employees partial subsidies for gas if they drive vehicles that get high mileage. “And next year, we plan to do something smaller for the balance of our employees,” he added. “We don’t do things halfway.”

Long identifies himself as a problem solver, and said it’s the approach he used when he began formulating the principles that would become the cornerstone of his insurance agency.

“I spend time identifying things that could hold us back, and look at situations and find resolutions other people wouldn’t think of,” he said. “I often tease my employees, but I believe people are supposed to laugh at work. If they are having a good time, they are more effective and efficient, and if they like their jobs, they do better at them, which leads to happier clients.”