Getting the Big Picture on Copyright Law

In my legal practice, I focus on the unique legal issues facing photographers and artists. Lesley Arak of FNS Studios in Springfield asked me an interesting copyright-related question recently that touches on issues impacting many business owners. The question was ‘If I wanted to recreate a famous photograph, and I hired a model, a stylist, acquired the right outfit, and created an image that looked a lot like the original – would I be in violation of the original photographer’s copyright?’

While these questions may not directly affect you in your business – the implications of the answers most certainly do. What if you are trying to create an image for your company that relies on an established theme or image? How can you protect yourself when you are borrowing a concept, the goodwill, or actual pieces from a previous work?

In order to prevail in a copyright-infringement claim, a plaintiff would have to prove the following two things: ownership of a valid copyright and that copying of original elements of the work occurred. In order to prove both elements, we need to examine the components of a work that has valid copyright protection, in addition to the details surrounding the copying of those protected elements.

• Originality
According to section 102(a) of the Copyright Act, protection can be afforded to ‘original works of authorship fixed in any tangible medium of expression.’ According to the Supreme Court in Feist Publications Inc. v. Rural Telephone Services Company (1991), a work is considered original if it was created by the author, rather than copied from other works, and it possesses at least some minimal degree of creativity.

Originality is satisfied so long as it possesses some creative spark “no matter how crude, humble, or obvious,” the Feist court ruled. This concept was first applied to photography back in an 1884 Supreme Court case of Burrow-Giles Lithographic Co. v. Sarony, where the question of whether a photographic process was merely mechanical and therefore not original was decided. The court decided that posing a subject, selecting and arranging the clothing, draperies, and other accessories so as to present graceful outlines and promote an artistic expression constituted originality and therefore such work was copyrightable.

However, the court specifically left open the question whether an ordinary photograph of a real-life scene could be a proper subject of copyright. There certainly could be an argument made that when a photograph is documentary in style and is almost identical to the original subject matter, that the originality requirement has not been met.

The federal district court in Bridgeman Art Library, Ltd. v. Corel Corp. (1999), bought into that argument, and held that a group of skillfully rendered photographic depictions of public domain art works was not ‘original’ for copyright purposes. Looking to the facts of the case, Corel sold a CD-ROM containing images that were faithful reproductions of public domain works taken and maintained by the Bridgeman Art Library. While the court recognized that the photographic reproductions of the original works required skill and effort to not provide any addition, alteration, or transformation to the work, it held that the art library did not own the copyright in the resulting images. In the words of the court, ‘slavish copying’ of another work, even where it reproduces the work into a different medium, does not have sufficient ‘originality’ to be copyrightable.

At what point does a work become original enough to no longer be considered slavish copying? The same court that decided Bridgeman provided some guidance a year later in Eastern America Trio Products v. Tang Electronic Corp. (2000). The court found the originality requirement met by the choices made by the plaintiff in the layout, angles, and lighting of the common industrial items. The court noted that ‘originality’ might be founded upon other factors such as choice of subject matter, timing, and selection of camera, film, or lens.

Keep in mind that originality is not a judgment of artistic merit or worth. Many things are protected by copyright that may not have much artistic merit such as taxonomies, the actual code written in programming language (as opposed to the execution of the code – which is the purpose of the program), or tabloid newspapers featuring stories about alien abductions and the largest hot dog ever eaten. Most likely any sort of picture, drawing, or photograph that one would use as a reference for reproduction would meet the originality requirements for copyright ability.

•Fixability
For purposes of these questions, fixability is probably not going to be a problem. According to section 101 of the copyright act, a work is ‘fixed’ for copyright purposes if it is in a tangible medium that is “sufficiently permanent or stable to permit it to be perceived, reproduced, or otherwise communicated for a period of more than transitory duration. Section 102 provides that perception, reproduction, or communication may occur directly by a person or with the aid of a machine, such as a computer.

Just as an aside, while this may seem straightforward – a basketball game is not copyrightable, but the recording of the basketball game would be – things can get murky in today’s digital world. The Ninth Circuit Court of Appeals decided in MAI Systems Corp. v. Peak Computer, Inc. (1993) that software copied temporarily into a computers RAM (chip memory) is sufficiently fixed to meet the ‘fixation’ requirements of copyright protection. Taking that ruling to an extreme could mean that almost anyone using a computer – or the Internet – would be infringing upon copyright. Because copies of information are made at a multitude of points – both on a person’s computer, computers on the Internet, and many places in between. This becomes important because whenever a situation arises where there is no alternative to copyright infringement – enforceability of the provisions becomes weaker, if they are enforced at all.

An example would be for those of you who are reading this online. The article was hosted on a server. It traveled across the Internet – probably stopping through a number of computers (perhaps for a cup of coffee and a donut) before getting to your screen. Every place that a copy of the article was – even for an instant – could be considered eligible for infringement under the Peak Computer standard. The Digital Millennium Copyright Act (DMCA) limits the seemingly unlimited applicability of this decision by means of excluding certain processes and providing safe harbors in other situations. This strengthens actual claims for infringement.

•Content
We know that a work needs to be original and fixated in some sort of tangible medium that can be perceived again with or without the assistance of a machine.

However, just because something fits within those two requirements does not mean that it is protectable — in whole or in part. Copyright protection is only available for the expression of ideas and not the ideas themselves. This is known as the idea/expression dichotomy. An example of this dichotomy would be that copyright would not protect a discussion with my partner about how we could set up a particular photo – but the notes we wrote on the back of a cocktail napkin would be protected.

The purpose for this distinction is to balance the First Amendment goals of free expression with the copyright goals of advancing the useful arts and sciences and affording protection to the creators of such work.

This idea/expression dichotomy is ultimately the crux of the analysis regarding potential copyright infringement in regard to the concerns raised by Arak.

If we were to create an image that resembled the Mona Lisa (an example that I use only because it is so widely known. However, if this were really the initial work, copyright wouldn’t have been an issue as the time of protection has expired), I find a woman who is of similar appearance and I dress her in a similar manner, placing her in front of a similarly situated background and take a photo. All I have copied is the idea of the original. No actual part of the original was used in my re-creation and therefore this copy would not violate the initial creators’ expression, rather just the idea.

However, if I took a high resolution image of the Mona Lisa and through the powers of Photoshop put my face into her head – I would have been using the actual original expression in my work – and assuming that copyright protection still existed in the original work – I would have violated it.

Before continuing in this analysis, it is important to note that copyright infringement is not an absolute ban on being able to use the material. It means that you will need to seek a license, or right to use, the material from the copyright holder. In a fairly recent movie, I am Sam, the soundtrack consisted of Beatles tunes. The producers of the movie sought permission from the applicable rights holders to use the original songs in the soundtrack. However, the cost to obtain the rights for all of the original performances was more than the cost to make the entire film. So the producers opted to acquire the rights in the words and music, and re-record the songs using mainstream artists as performers.

How Does a Plaintiff Show Copying?

Generally, to establish that copying occurred, a plaintiff must show that the alleged infringer had access to the plaintiff’s original work, that the work contained copyrightable elements, and that the infringing material is ‘substantially similar’ to those copyrightable elements in the original work. If the works were genuinely independently created and just happen to be similar – then there is no case for a copyright infringement suit.

In the matter of Lloyd-Webber v. Repp, the court concluded that just because a song (“Close Every Door” from the musical Joseph and the Amazing Technicolor Deamcoat) had been widely disseminated as an LP, a hit single, in sheet music, in theater performances, and on the radio, is not evidence to support that the alleged infringer had access to the particular song. Contrast this New York district court case with a case in Florida determined a year earlier. The court in Playboy Enterprises Inc. v. Starware Publications Corp. concluded that the alleged infringer of images from Playboy magazine had access stating, “virtually every adult in this country has had ‘access’ to the copyrighted photographs published in Playboy® Magazines.” Ultimately, the court in Lloyd-Webber determined that access is not truly an essential element and that it may be presumed if the works are “strikingly similar” — a higher standard than “substantially similar.” The example the court gave in the Starware case was the “virtually exact copies” of photographs scanned in from Playboy magazine and sold on CD-ROM.

In regards to the direct manner in which an alleged infringer might have gained actual access to the original work, the court in Santrayll v. Burrell (1998) concluded that a reasonable juror could find that the alleged infringer could have acquired access to the plaintiff’s song by means of their mutual acquaintances, regardless of the fact that the connections were attenuated. In the event that one was not directly referring to a particular photo, just having connections to the artist or the work is probably enough to satisfy this requirement.

So Where Does the Buck Stop?

I have heard it proclaimed by numerous people that there are only five photographic ideas that have ever been taken in the world. Every other photograph has been some sort of derivative of those initial ideas. While this is certainly questionable, it does wrap up this essay in a concise manner.
Just because someone had an idea before you – does not mean that you will be unable to use that same idea for your own work – so long as you express it in your own original way.

Matthew B. Harrison, Esq. is an arts and entertainment lawyer with the firm Harrison Strategies, LLC in Springfield. He also is a photographer with FNS Studios;www.photosandthelaw.com 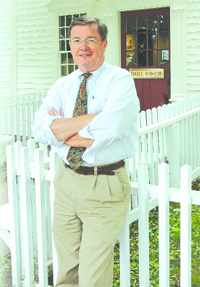