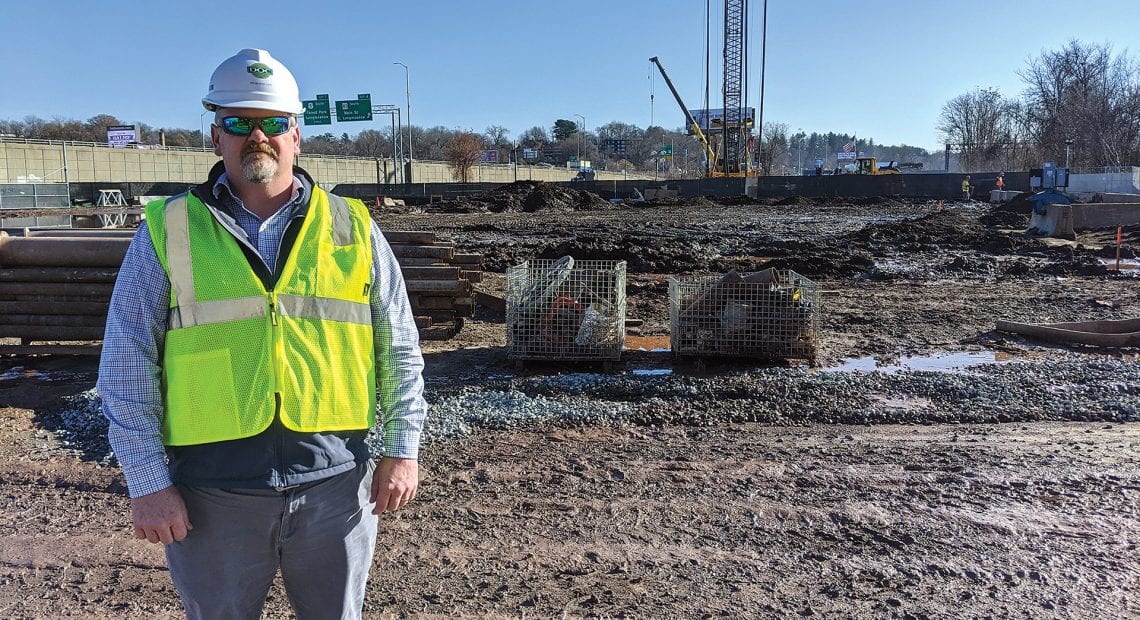 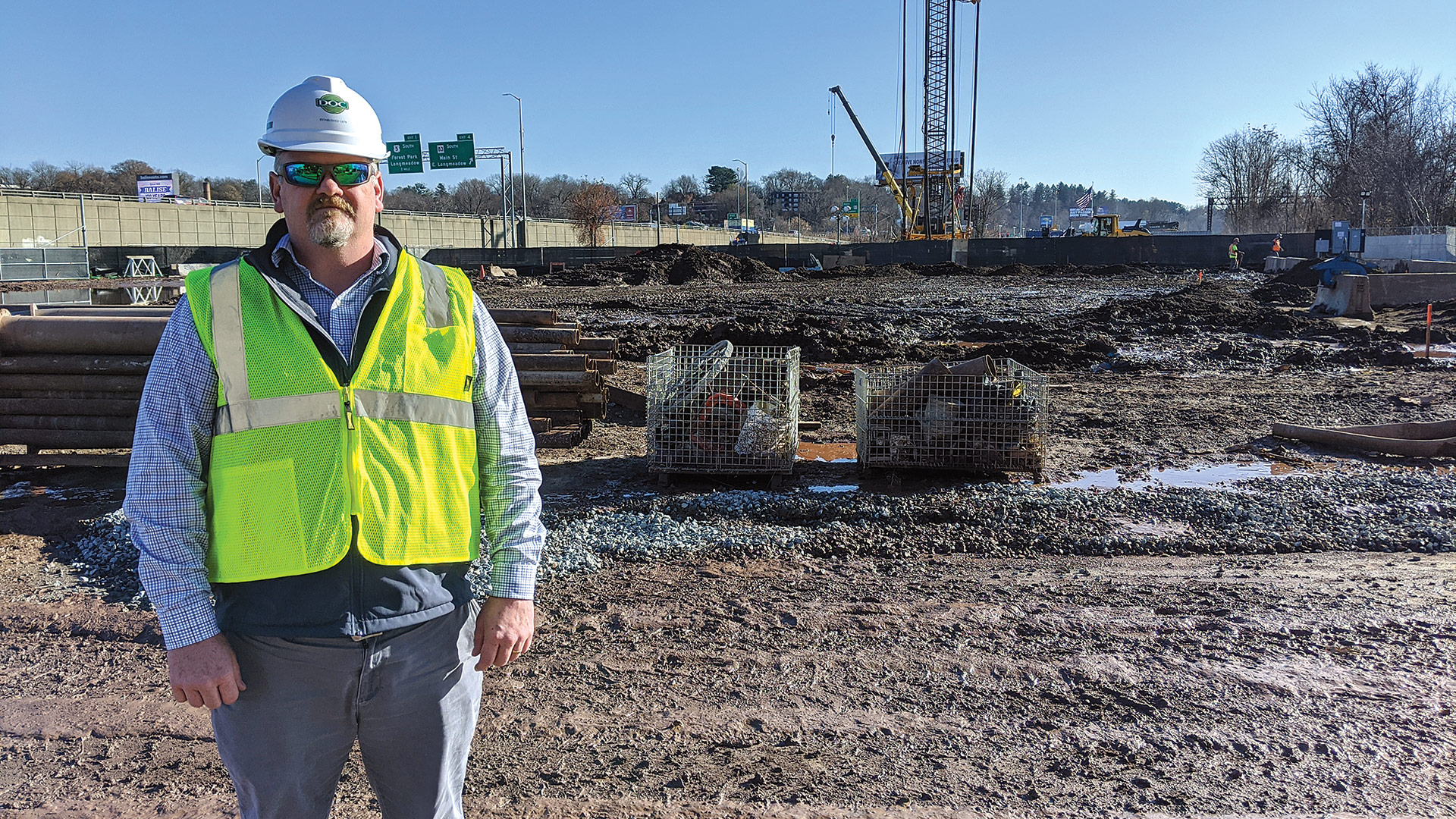 Jeff Weinman stands on the former York Street Jail site, where a new, state-of-the-art pump station is being built.

The wastewater pump station at Springfield’s riverfront has done its job for more than 80 years, but it’s nearing the end of its useful life and lacks the capacity to keep up with the region’s growth — which threatens the cleanliness of the Connecticut River itself. That’s why the Springfield Water & Commission has launched a $115 million project to build a new station and three new pipelines across the river — a project that comes with some intriguing challenges and equally innovative solutions, including something called microtunneling.

When the wastewater pump station on York Street in Springfield was built 81 years ago, the city’s infrastructure was much different — and so were its sewage-treatment needs.

“The existing pump station is pretty old, though it’s still functional,” said Jeff Weinman, senior project manager Daniel O’Connell’s Sons (DOC), the contractor overseeing the construction of a new, much larger pump station at the site. “The capacity is the issue. As the city has expanded over the years, it’s kind of at its capacity right now, so they need to create additional pumping capacity there. In order to that, they needed to build a bigger pump station with bigger pumps, bigger piping, bigger everything.”

The project is a cornerstone of the Springfield Water & Sewer Commission’s efforts to comprehensively plan projects that will meet multiple pressing needs such as combined sewer overflow reduction, climate resiliency, system redundancy, and infrastructure renewal. Construction is expected to last well into 2022. 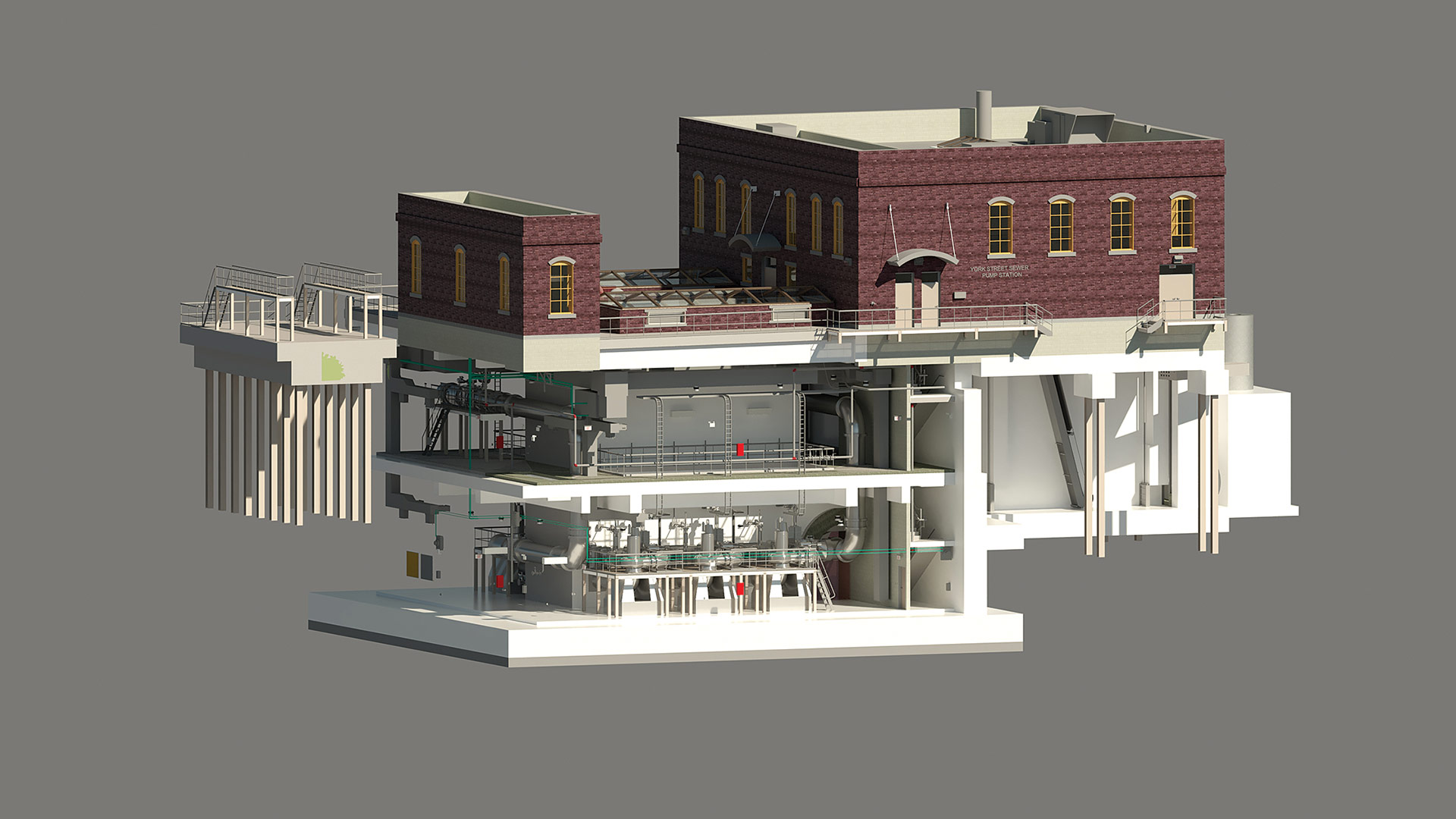 A rendering shows the future pump station’s footprint both above and well below the ground.

The innovative project, expected to create about 150 construction jobs over the next three years, is designed to address four key issues, including:

• Infrastructure renewal (the new, modern station will replace an aging station nearing the end of its useful life and accommodating future growth in the region);

• System redundancy (three new pipes under the Connecticut River will add redundancy and improve service reliability for customers in Springfield, Ludlow, East Longmeadow, and Wilbraham); and

• Climate resiliency (flood-control protection will be increased by repurposing the old pump station).

The project is a culmination of years of planning — specifically through the commission’s Integrated Wastewater Plan (IWP). Adopted in 2014, the IWP was one of the first such plans in the country to integrate project planning for regulatory compliance — specifically, projects that fulfill an unfunded federal mandate to eliminate combined sewer overflows — and for renewal of aging infrastructure.

A Question of Capacity

The new station is being built on the former site of the York Street Jail and will connect to the Springfield Regional Wastewater Treatment Facility on Bondi’s Island through three new, 1,200-foot river crossing pipes. The additional pipes will supplement the two 80- and 50-year-old pipes under the river now, allowing for more regular maintenance and alternatives during emergencies.

“It can reduce the potential for severe storms to impact water quality in the Connecticut River by having storm runoff or having the city’s sewer system overflow.”

“The delivery method is a little different,” Weinman said. “We did a technical proposal for the job, and based on that we were awarded the contract, then we worked with the design team during the final stages of development of construction documents, providing budgeting support and working with design team as they finalized documents and tailored them to the approach to the work that we thought best.” 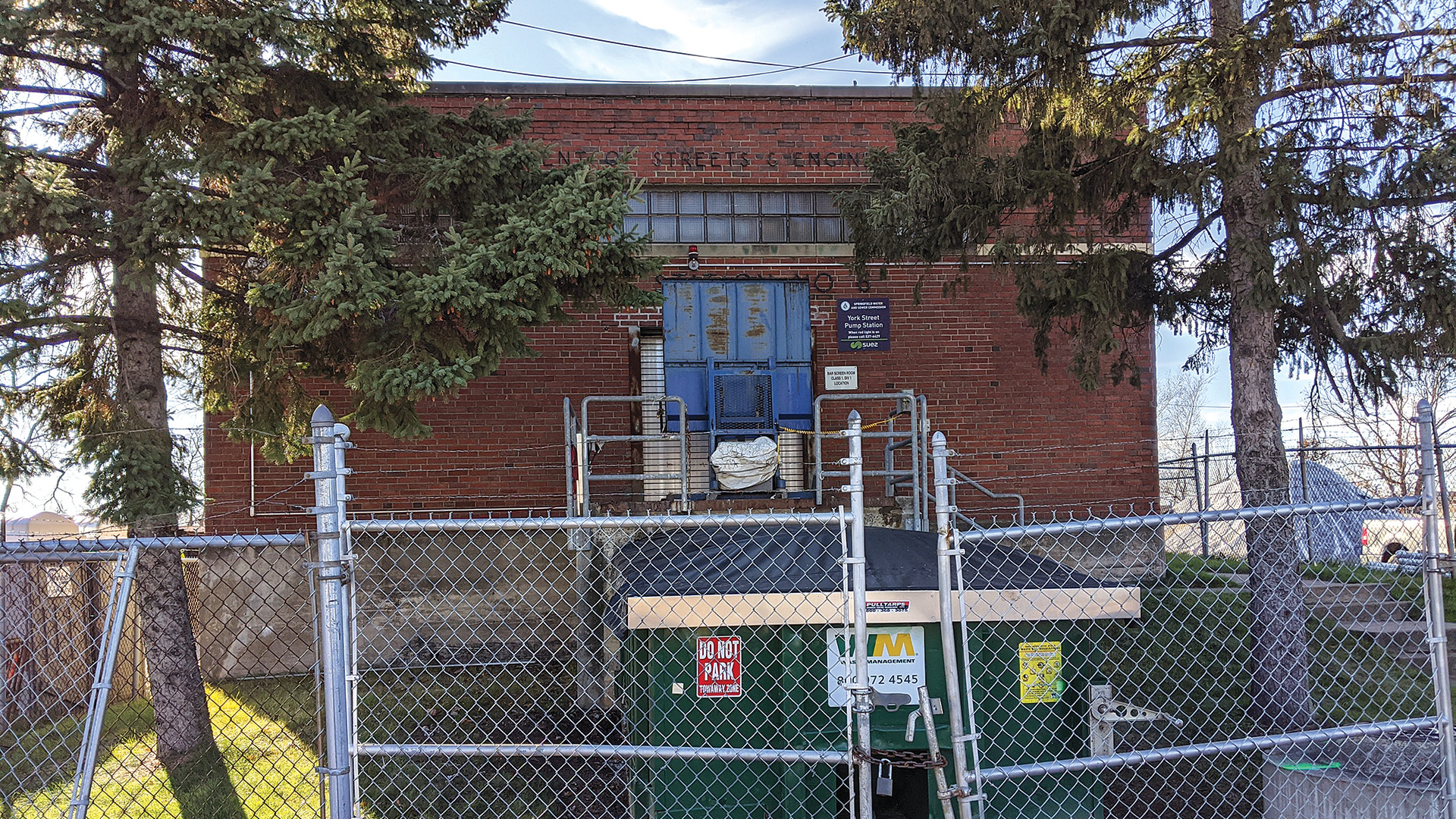 The current, 81-year-old pump station is much smaller — and can thus handle much less wastewater — than the one coming online in 2022.

One of the interesting challenges of the project is where it’s sited, shoehorned between West Columbus Avenue and the flood-control wall and the infrastructure on York Street, including the main interceptor pipe for the city of Springfield.

“The pump station needs to be deep enough to work with the existing elevations of the infrastructure and also be able to have the capacity to handle the flow that it needs to handle,” Weinman said. “The bottom elevation of the pump station is 50 feet below existing grade. The site is so small, you have to go pretty much straight down with excavation to build the pump station.”

So, in a move uncommon in Western Mass., DOC will use a slurry wall for supportive excavation. “It’s a type of system usually used in downtown Boston and urban settings where you don’t have a lot of real estate. A concrete wall is built in the ground without using formwork,” he explained. “It’s kind of a unique process — the first time I’ve been involved with a project that employs that system.”

Another challenge involves running the new pipelines under the Amtrak tracks, Weinman noted. “So they’re going to be microtunneling under the tracks. We did a smaller supportive excavation for the launch pit for the microtunneling. That’ll be going on hopefully next summer — boring a hole beneath the flood wall and the railroad tracks out to the other side of the tracks down toward the river.”

Next summer will also see the start of the underwater pipe installation. That phase of the project should take about 12 months, as will DOC’s infrastructure upgrades at Bondi’s Island to expand the capacity of the sewage intake there. The construction of the pump station itself is the most involved part of the project; a groundbreaking took place in the spring, and it should be complete in May 2022.

The river-spanning pipe installation — which DOC will subcontract to a firm that specializes in such work — is a relatively straightforward job, but the process of completing the work has become more difficult in terms of the regulatory aspects, Weinman told BusinessWest.

“There’s a lot more awareness now of the potential environmental impacts, so the planning of it becomes a lot more intensive. You work with regulators, MassDEP, the Army Corps of Engineers, and other regulatory agencies involved, making sure you’re tailoring your work in a way that complies with all the regulations and minimizes the impact,” he explained. “It’s an arduous process, and I understand why it’s there.”

Still, the entire project itself will have a major environmental benefit, and that’s keeping the Connecticut River cleaner while better meeting the region’s growing wastewater needs.

“The York Street Pump Station and Connecticut River Crossing Project is a sign of the commission’s smart and future-oriented approach to stewarding the region’s water and wastewater infrastructure,” Commission Executive Director Josh Schimmel said at the spring groundbreaking. “These types of projects may not always be the most glamourous, but they are critical to maintaining public health, service reliability, and environmental protection in the region for the 21st century. We are proud to initiate this project that will maximize ratepayer dollars by meeting multiple needs.”

To Weinman and his team at DOC, it’s another rewarding challenge, particularly in terms of innovative methods like the slurry wall and the trenchless tunneling under the railroad tracks, that promises to lead to a positive outcome.

“That’s the nature of construction,” he said. “There are so many different systems out there, and every job has different challenges and different solutions.” 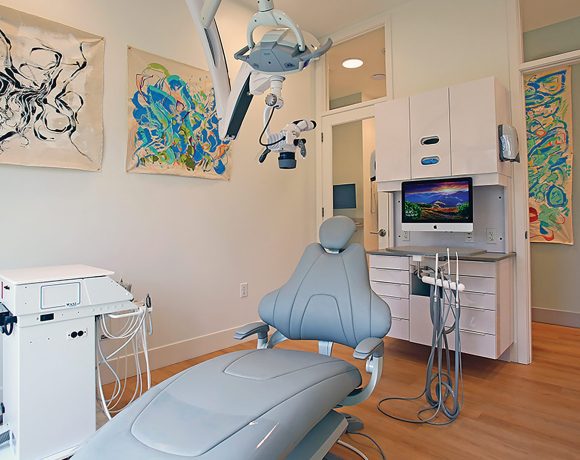