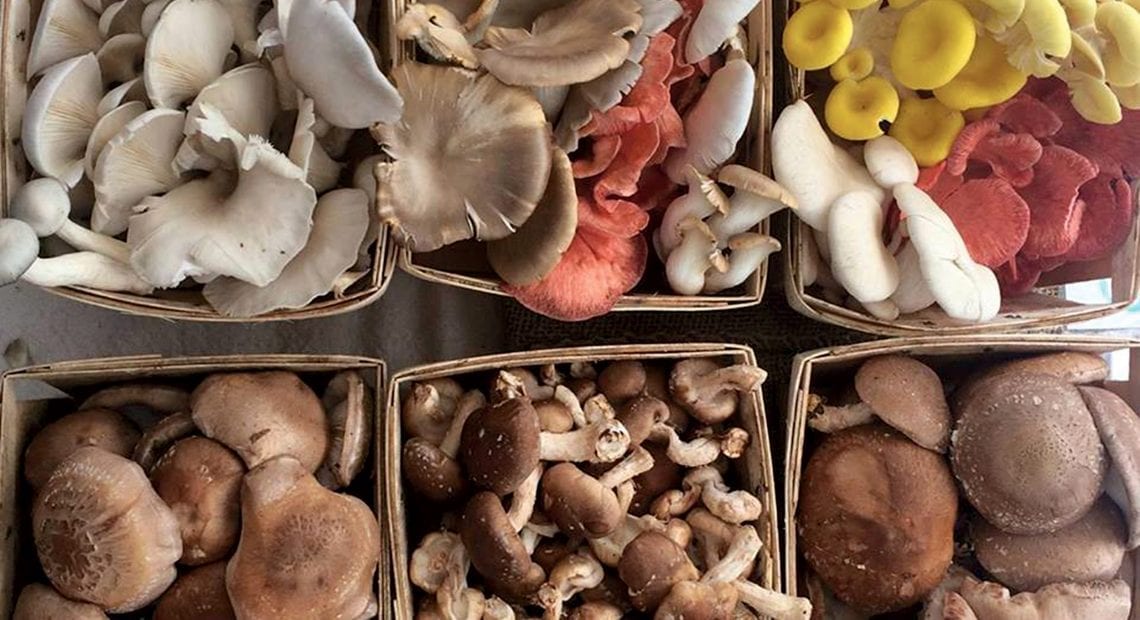 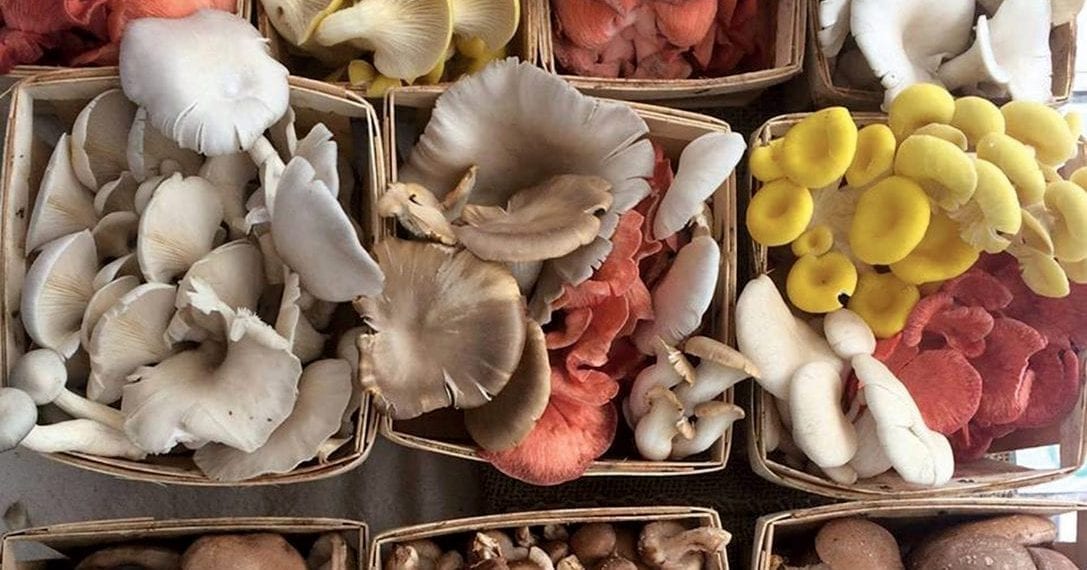 Julia Coffey brought this selection of mushrooms to a local farmers market. She also sells to restaurants, campus food services, and other food distributors.

Julia Coffey’s business was mushrooming — in more ways than one.

In fact, her enterprise, Mycoterra Farm, specializes in mushrooms. And when she was looking for a larger space in which to grow, she received a fortuitous phone call.

“In mushroom production, as with much agriculture, efficiency of scale is big — and we had maxed out capacity at our farm in Westhampton,” Coffey said.

She found a closed equestrian center on the market in South Deerfield that would make an ideal space, and initially pursued loans through the USDA Farm Service Agency. But she still needed more funding to get up and running on the new site.

“We were trying to figure out how to get the new farm online with a little less money than I needed, and it was Rebecca who reached out to me to see if we had any funding needs,” she recalled. “It was very timely.”

That was Rebecca Busansky, program manager for the Pioneer Valley Grows Investment Fund, or PVGrows for short, a regional investment and loan program launched in 2015 that provides financing and technical assistance to food and farming businesses in Western Mass.

“We really set out to help the whole food system. This is about farms and local food businesses and everything that makes a healthy food system,” Busansky told BusinessWest the day after the Franklin County Community Development Corp. (FCCDC), which oversees the fund, marked the project’s three-year anniversary with a celebration at Raven Hollow Winery at Koskinski Farms in Westfield.

It wasn’t just an anniversary being celebrated, but a funding milestone — $1.25 million, in fact, halfway to the fund’s original goal of $2.5 million. That money has helped more than 25 local farms and food entrepreneurs grow their businesses — and, in turn, a critical sector of the Western Mass. economy.

Mycoterra is a good example. The gourmet and exotic mushroom farm, as Coffey described it, grows “wood-loving” mushrooms indoors year-round. Mycoterra specializes in shiitake, oyster, and lion’s mane mushrooms, but experiments with many other varieties as well — and, in doing so, impacts scores of other food-related businesses.

“We market directly to farmers markets, about 50 restaurants statewide, and campus food services, and with the recent move, we’re increasing production and are working with a number of local distributors,” she noted.

John Waite, executive director of the FCCDC, said PVGrows offers an innovative, mission-driven way for community members to invest in their values by supporting and sustaining businesses that can make real changes to how food is grown, distributed, and purchased. “It takes the local movement to a whole new level. It’s beyond eating local — it’s investing locally.”

To date, nearly 50 investors, including individuals, businesses, and foundations from New England and New York, have contributed a minimum investment of $1,000 to the fund, with interest paid annually, Busansky explained. These community investments are pooled together to provide the financing that farm and food entrepreneurs need to grow their businesses.

The fund grew out of existing FCCDC programs that provide technical assistance to local farms and food producers in the Valley, she added, noting that a need became evident for a funding source specifically aimed at benefiting these businesses. 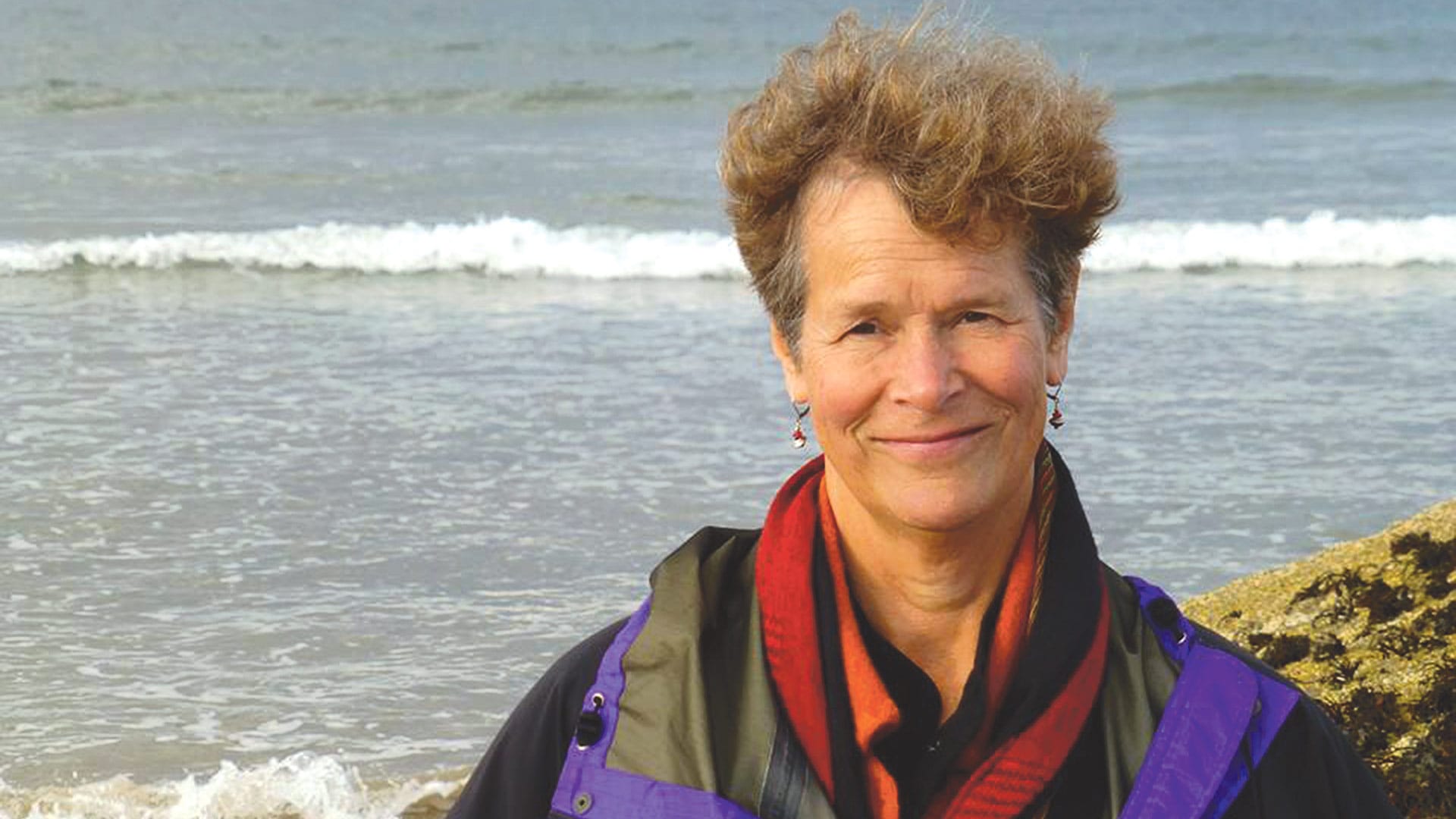 Three foundations have been important to the fund’s growth: the Solidago Foundation, the Lydia B. Stokes Foundation, and the Henry P. Kendall Foundation, which collectively established a loan-loss reserve. A community pool was then established, accepting investments of $1,000 to $10,000 with a five-year term and a very low interest rate.

“We felt it was important to add this community-investment piece,” Busansky said. “The whole idea was to make it a minimum $1,000 to invest, which doesn’t make it completely accessible to everyone, but it’s not only open to wealthy people, either. It democratizes capital.”

Larger investments come with longer terms and higher interest rates, with the idea that investors with a little more money could be willing to take on more risk, Busansky added. But so far, there hasn’t been much risk for investors.

“We have 25 well-performing businesses borrow from us so far, and we haven’t touched the loan-loss reserve — in part because we give a lot of technical assistance.”

Coffey described the loan process as easy to navigate, but that straightforward experience wasn’t the only thing that impressed her. 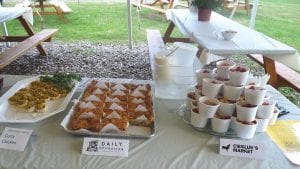 The recent three-year anniversary celebration featured food provided by many of the fund’s borrowers.

“I’ve got a background in bookkeeping, so I feel I had some skill sets that some people don’t,” she said. “But they were prepared to offer technical assistance, too, for people and startups and agricultural food businesses that need it. They are a very knowledgeable resource, and it was great getting things established right away.”

The FCCDC has been involved in small-business lending for close to 30 years and has plenty of expertise in providing guidance to young enterprises, Busansky noted, from business plans to websites. So she’s not surprised the PVGrows fund has found early success in its mission. “We have a system in place that’s worked well, and now we’re ready to seek the additional $1.25 million in commitments.”

Jennifer Ladd is one of those investors. “You don’t have too be a wealthy person to invest in Pioneer Valley Grows, which I think is a wonderful thing about it,” she told BusinessWest.

“Supporting agriculture in this Valley feels like contributing to a sense of vitality. It’s the same kind of feeling I get when supporting the arts — there’s creativity, growth, collaborations between people,” she went on. “And there are multiple layers of assurance that your money will actually have an impact and be of service.”

Ladd said the low interest rates for investors shouldn’t deter anyone because most people getting involved in this do so because they believe in the value of supporting local farm and food businesses.

“I enjoy cheese, fruits, vegetables, and wine around here, and I don’t mind not getting much of a financial return,” she said. “I’m choosing low interest because that serves people just starting out. These new endeavors need time to get their roots in the ground, so to speak, and this money can help them do that. It will yield benefits in many ways.”

Some of that benefit is cultural, she added, contributing to quality of life and a certain agricultural fabric of the region, as well as a sense of connection with people who thrive off the land and wind up feeding their neighbors.

“We don’t have huge farms here, like in the Midwest, with thousands of acres of corn. This is agriculture we actually do benefit from immediately,” Ladd said. “I also feel like it’s contributing to my sense of security; with climate change and the volatility we see in the world, it’s good to have food being produced locally. So it’s a sort of regional security that has a payoff right now.”

Food and farm businesses applying for financing and business support through the PV Grows Investment Fund are vetted for mission fit by a consortium of community-lending institutions and food and agriculture specialists, Busansky explained.

Terry and Susan Ragasa, owners of Sutter Meats in Northampton, were among the early borrowers. “From start-up funds to get us open to facilitating a business consultation to get us to the next level, the PVGrows Investment Fund has been an incredibly supportive asset for Sutter Meats,” Terry noted.

Coffey has had a similar experience, as she grows a business that takes agriculture and sustainability seriously. Her mushrooms are handcrafted in small batches, and her natural methods of production accelerate decomposition, build soil, and cycle nutrients — critical processes for healthy ecosystems, she explained.

In turn, she also appreciates the financial ecosystem being created through the PVGrows investors and borrowers. She said she ran into an old friend recently who had invested in the fund, around the same time Coffey became a borrower, and it struck her how PVGrows is essentially neighbors helping neighbors — and helping a critical part of the region’s economy succeed.

“Western Mass. has a phenomenal agricultural economy, not just the producing, but the processing, and the loan program helps add layers to it,” Coffey said. “We eat really well locally, but the funding and the technical aspects of setting up a business — and setting up a business well — is something that is often overlooked.”

As the fund expands, the hope is that Mycoterra won’t be the only agricultural business in the region that’s mushrooming.