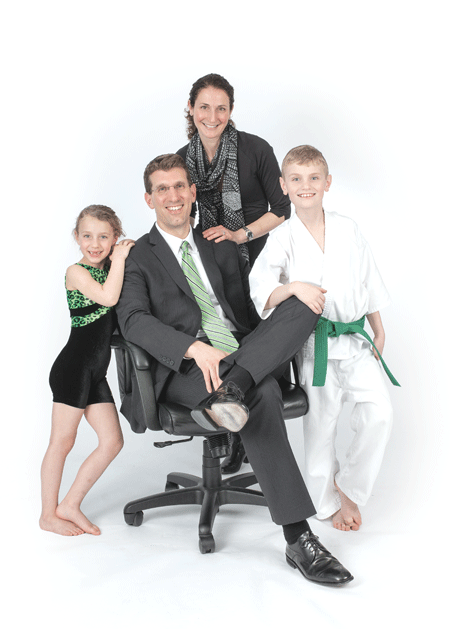 Seth Stratton’s values are so important to him that he gave up a position with an international law firm that employed 1,100 attorneys and joined a firm in East Longmeadow with four lawyers.

“The work I do now is a lot more interesting and rewarding than working for Fortune 200 or 100 companies where I dealt with in-house lawyers for other firms,” he said. “Big firms are very lucrative, but you work all the time, and I came to realize that life is more than just working hard.”

After passing the bar exam, Stratton was hired by Brown Rudnick LLP in Boston, where he did business and commercial litigation. But seven years ago, Stratton and his wife, Jennifer, decided to move back to Western Mass. because they had an 8-month-old son and wanted to live closer to their families. He transferred to Bingham McCutchen LLP’s Hartford office, but found that the long hours and long commute prevented him from becoming part of the professional community in Greater Springfield.

So Stratton left Bingham McCutchen to work at Fitzgerald Attorneys at Law, P.C. He said there were challenges in moving from a big-city firm, because he no longer had hundreds of colleagues to collaborate with, but today he takes pride in representing local business owners — balancing work and family time (with his wife, Jennifer, and their children, Nolan and Caitlin) — and being involved in the community.

That’s an understatement, actually; he’s a board member of the World Affairs Council of Western Mass., on the board of trustees for First Church of Christ in Longmeadow, and a member of the leadership committee for Community Legal Aid’s Access to Justice Campaign 2013. He has also done work for Lawyers for Children America in Hartford.

Among its clients, Stratton’s firm represents MGM Resorts International’s Springfield casino project, and he is working again with attorneys from Brown Rudnick in Boston. “I’ve come full circle,” he said.