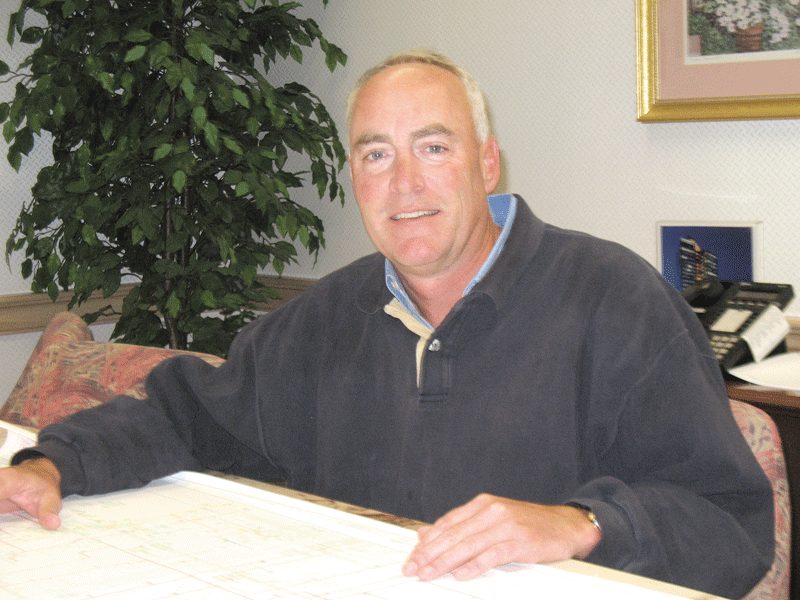 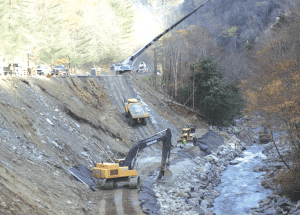 When Hurricane Irene washed out miles of the Mohawk Trail last August, plenty of Franklin and Berkshire County residents were suddenly forced to find alternate routes to work and other destinations — often at great inconvenience.
“We’re not really a rapid-transit society, although we like to believe we are. We’re not Europe, even though some people want to make us Europe,” said John Rahkonen, president of Northern Construction Service in Palmer. “How would you run a train to some of the hilltowns? No matter what you do, you still need cars, and roads.”
Crews from Northern have spent plenty of days on Route 2 since that storm — which wreaked even more havoc just to the north in Vermont — fixing roadways that, in some cases, were completely wiped out by the hurricane.
For contractors that specialize in such projects, events like Irene mean steady work, in the same way tree-service outfits haven’t slowed down a bit since the freak October snowstorm felled limbs and branches across Western Mass. And when public roads are damaged, it creates a need that can’t be set aside, no matter what the economy is like.
Construction companies that focus on the private sector — where projects can more easily be put off or cancelled for financial reasons — have had a rough few years, but state and municipal jobs have continued to flow steadily (if not spectacularly) for firms heavily invested in the public sector. And it’s not just roads and bridges; the region has seen a building boom for new high school construction and renovations that shows no signs of slowing down. 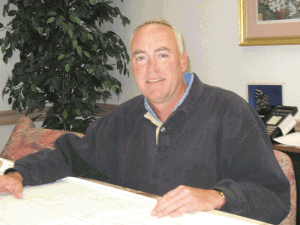 Dave Fontaine says public-school construction has been a healthy niche in the region for the past quarter-century.

“We’ve had a pretty good share of opportunities over the past 20, 25 years in the public-school market. We built a lot of schools locally,” said David Fontaine, president of Fontaine Brothers in Springfield.
He cited Chicopee Comprehensive High School as one of the firm’s bigger recent projects, but Fontaine has several other schools under construction across the state, including three in the Pioneer Valley, each at a different stage of completion. The new Minnechaug Regional High School in Wilbraham will open this fall, followed by the new Easthampton High School next spring. The firm also recently broke ground on a new West Springfield High School, which will open in 2014.
“They’re all unique,” Fontaine said. “The one coming out of the ground now in West Springfield is a large school with a big footprint and a large, complicated earthwork job. That was the big challenge there, coming out of the ground. And then there’s the length, because you’re tying up a lot of capital, for most of three years. You’re building a new building for two years, then you’re there for the third year tearing down the existing building and reconfiguring the whole area.”
Clearly, this is a vibrant scene — other high schools currently being constructed or rebuilt include Longmeadow High School and the new Putnam Vocational Technical High School — at least in part spurred by the Massachusetts School Building Authority, which, since 2004, has helped communities pay for school construction through a 1-percent sales tax.
“Since they started sending a penny of the state sales tax, we’ve fared pretty well,” Fontaine said. “The Building Authority hasn’t forgotten Western Mass.” The Bay State also benefited from the 2009 federal stimulus, which channeled $7.9 billion into the Commonwealth for construction projects.
Still, these success stories have not spread to all areas of construction, and contractors are finding that, in projects not involving a steady stream of state funds or, in the case of storm-damaged roads, immediate need, the public arena isn’t much more promising than the still-stagnant private sector.

Slim Pickings
Indeed, while state-funded projects have been available in varying degrees, infrastructure projects on the municipal level have been frustratingly slim, according to Matias Goncalves, president of Caracas Construction Corp. in Ludlow.
“It’s very competitive out there,” said Goncalves, whose firm focuses on public-sector projects such as roads, curbs, sidewalks, and underground utilities. “It’s tough right now.”
The entire industry was pounded throughout the Great Recession, and Goncalves said his niche has not rebounded due to tightened purse strings in city and town budgets.
“It’s the same as before; they don’t have as much tax revenue coming in, and as a result, they can’t do the capital-improvement projects they’ve been hoping to get done,” he told BusinessWest. “The same way people complain about school budgets, nobody wants to do any road work.”
And when jobs do come online, Goncalves said, contractors are faced with the same competitive situation across the board — namely, far more companies getting into the bid action than in decades past, and coming from farther away than before.
“We bid a job a couple of months ago with about 20 bidders; we finished in the middle of the pack,” he said. “It’s doubtful you’ll find a project without at least six to 10 bidders, easily.”
Projects involving state roads, on the other hand, have benefited from roughly $1 billion in bond issues per year recently. “That has not changed over the past two years,” Rahkonen said.
“We’re primarily doing a lot of bridge work in three states — Connecticut, Rhode Island, and Massachusetts — and we’re probably sitting on quite a bit of work,” he said, adding that the firm employs between 120 and 200 people, depending on the current workload.
Recent or pending work at Northern includes the Davitt Bridge in Chicopee, an $8 million job replacing most of a bridge on Route 2 in Gill, and a $6 million job repairing hurricane damage in Shelburne Falls. “There was no road in places. It varied from place to place, a lot of washouts; we had to do a lot of that repair on the Mohawk Trail.”
The situation on Route 2 was especially critical, he added, considering it’s one of only three thoroughfares running east to west across the state, the Pike and Route 20 being the others.

Cost and Effect
Still, Rahkonen said, these aren’t exactly heady days, even for firms who focus on state work. The fierce competition for bids that Goncalves cited has made it very difficult for firms to make profits, while costs continue to mount.
Take a bulldozer, Rahkonen said. Estimating conservatively, that piece of equipment might log 2,000 hours annually; after five years and 10,000 hours, it’s time to replace it. Pickup trucks — Northern maintains between 20 and 30 — only last so long, too, and need to be replaced at a cost of close to $40,000 per vehicle.
But recently, the U.S. Environmental Protection Agency has made budgeting even more difficult by requiring that all building equipment using diesel fuel (Northern has about 100 such machines) be fitted with a device to lower emissions to what are known as ‘Tier 4’ standards. At a cost of about $3,000 per conversion, the math isn’t hard to figure out. “That’s an additional cost that no one is putting into jobs, but we’re forced to do it.”
At a time of such tight profit margins, Rahkonen noted, any sort of additional cost is a burden, and it’s harder for contractors to grow their business. “They don’t expand, because they’ve got to make ends meet. Companies want to reinvest and hire more people, but if they’re getting clobbered, they can’t do it.”
Intense competition across all sectors of construction has brought players from Greater Boston and even neighboring states into Western Mass., but Fontaine has responded by doing the same; in addition to its local projects, the company is building schools in Norfolk and East Bridgewater.
“We’ve been more competitive recently; our forte has been larger projects, which don’t seem to draw the 10 to 15 bidders most projects do. I also think we’re pretty good at these big schools,” Fontaine said, adding that the company has the size and resources to absorb the day-to-day costs associated with a $5 to $10 million project over multiple years.
“Fortunately, we have the financial capacity to be carrying an awful lot of money over an awful lot of time,” he told BusinessWest. “I will say that, in the public-school marketplace, cities and towns do pay their bills every four to six weeks on average, so that’s pretty good, all things considered.”

Lean and Green
The keys to juggling so many big projects at once are many, Fontaine said, including the task managing subcontractors at such a volatile economic time.
“The last five to 10 years have been difficult with so many subcontractors going out of business, and you’re always nervous that a lot of bad subcontractors will turn a project bad, so we’re always very particular about who we subcontract certain things to,” he explained.
Then there’s the new emphasis on ‘green’ building, which has become especially important to municipalities putting up public structures like schools — a specialty that not only requires evolving skills, but reams more paperwork and frustration. Still, Fontaine said, he understands the momentum of the trend, particularly when it comes to energy-efficiency improvements that carry a long-term “bang for the buck.”
Other trends in public projects come and go.
“There’s a lot of library funding out there; we’re doing the Holyoke Library renovations, and some others have been funded,” Fontaine said. “But we’re not seeing anything in public-sector housing improvements.”
On the other hand, he said, there has been a rash of fire stations constructed over the last couple of years, and UMass Amherst continues to engage in numerous renovation projects.
Still, “about 70% public-sector activity is done by out-of-town firms,” he said. “But we’ve been fortunate. We’re not afraid to take our game on the road, either.” 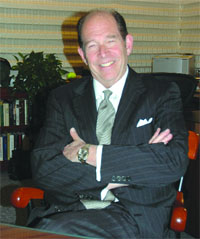 At Home with the Concept