SSO’s New Executive Director Works in Concert with the Community 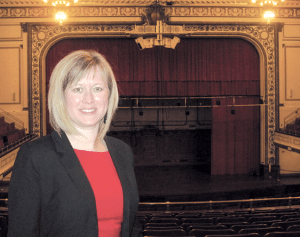 Audrey Szychulski decided long ago that she was better suited to managing an orchestra than playing in one.

Audrey Szychulski says she’s very competitive — especially, it seems, when it comes to raising money and setting and surpassing goals.
It’s a pattern that was in evidence while she was a Girl Scout growing up in Northeast Philadelphia. The neighborhoods in that area were densely settled, with hundreds of homes situated extremely close to one another, a situation she took full advantage of as she would personally account for sales of 400 to 500 boxes of cookies during those annual spring drives, easily tops in her troop.
And that pattern has continued during a career in music administration launched after Szychulski concluded that she was more suited to managing orchestras than playing in one — although, for some time, the latter was her professional ambition.
By the time she was 16, she had toured more than 20 countries as a young cellist in an ensemble, which had her seriously, but also realistically, considering her future in classical music.
“It seemed like a really fantastic life; therefore, I thought I wanted to be a performing musician when I grew up,” she said, pausing to add a ‘but’ as she searched for the right words to explain why she didn’t pursue that exact route for a career.
“Well, I’m only an OK player,” she admitted, adding that this assessment changed her specific focus, but not her desire to be involved with music professionally, a passion that has taken her to Springfield and the position of executive director of the city’s symphony orchestra.
A math whiz in high school, her education led to private teaching of cello, string specialties, and arts administration, before landing managerial positions with three orchestras, most recently the Erie Philharmonic in Erie, Pa.
Szychulski found similar challenges at all those organizations — especially the task of making the public aware of their area symphony and building an audience base — but eventually discovered that effective collaboration with businesses and other arts-related institutions is the key to establishing, and enhancing, an orchestra’s presence in a given community.
And that’s one of many lessons she’ll work to apply with the Springfield Symphony Orchestra (SSO), where she will succeed Michael Jonnes, who retired last December after leading the orchestra for 15 years.
Another of these lessons is that she is happiest — and an orchestra is most successful — when the administrative director and the conductor are on the same page and working, well, in concert with one another, and she expects such a relationship in her latest career challenge.
“It is a unique situation where you have an organization that has two staff leadership positions,” she explained. “The conductor is the head of everything artistic, and my job is to run the marketing, audience development, and organize the staff members to see that all of the things that are needed to get to a performance are wonderful.”
Szychulski’s extensive and serious musical background impressed Kevin Rhodes, the SSO conductor since 2001, who called her “the whole package.”
“She’s so enthusiastic and has new ways of looking at what we do; she doesn’t have to reinvent the wheel here, but we’re always eager to try new things,” said Rhodes. “We’re celebrating our 70th year, and I think that speaks to the orchestra’s ability and desire to continually be adapting, changing, and being flexible. I think we’re going to have a great time.”
For this issue, BusinessWest talked with Szychulski about her goals for the future of the SSO and her new partnership with Rhodes in an ongoing effort to create a vision for the orchestra and make it reality.

Achievements of Note
Szychulski graduated from Mansfield University in Pennsylvania, earning a degree in music education, and was essentially self-employed coming out of college. She grew her venture to nearly 70 private music students per week before eventually accepting a teaching position at Elmira College in New York, which she kept for five years.
A friend recommended her for a part-time position as manager of education and operations for the Orchestra of the Southern Finger Lakes (OSFL) in Corning, N.Y. Just 24 at the time, she landed the position and was immediately involved with the youth orchestra, a junior string ensemble, a community chorus, and the logistical aspects of coordinating all the concerts. A few months later, she was filling in as interim when the executive director left. At summer’s end, the OSFL board came to Szychulski and said it wanted to offer her the job.
“But I’d never applied for it,” she said, noting that, while the board had interviewed several people for the position, it noticed that she’d saved and raised more money than the organization had ever seen, and in just four short months.
Starting with a $200,000 budget, she grew it to $400,000, due in large part to launching the OSFL’s first major donor society.
Her next career stop led her to the executive director position with the Norwalk Symphony in Connecticut, which was celebrating its 70th anniversary at the time. Szychulski found that Connecticut has more orchestras per capita than any other state, and also learned more about raising money very quickly to help an organization that was financially struggling.
From Norwalk, she moved on the Erie Philharmonic, where she planned the organization’s 100th anniversary (taking place this fall) and, with a $1.5 million budget, created a strategic plan that balanced a budget that had not been balanced in a decade, showing a six-figure profit by the second year. That plan also helped to increase subscriber sales by 33%.
Concurrently, she earned a master’s degree in Arts Administration―— equivalent to an arts MBA — from Drexel University, and was one of the first students to earn that degree online.
It was Szychulski’s 2011 thesis at Drexel that Rhodes found to be of great interest when he first read her résumé.
“The first thing you see is a piece of paper in front of you, and what stood out was what she was doing in her master’s … the focus on social media and electronic media,” said Rhodes. “All of that is tremendously important, very topical, and very new.”
That thesis involved a survey of 797 professional organizations regarding their use of social media, which had a healthy 30% response. She documented how often they were posting on Facebook and Twitter, who in the organization was actually doing the posting on social media, and which orchestras were most active with social networks related to their overall music programs.
Szychulski explained that there are only 10 orchestras in the nation the size of the New York and Los Angeles philharmonics, and that most orchestras operate on a budget of $500,000; the SSO’s budget is $2 million.
“What I found was that orchestras of our size, not the big guys, not the little guys, are the organizations that are most active and are looking for awareness and audience-development efforts,” she told BusinessWest. “But I found a funny thing: everybody wants to be raising money online, but fewer than 15% actually asked anyone to make a donation online through their social media.”
Her 230-page thesis concludes, among other things, that the reason for so little online fund-raising is usually the lack of a strategic plan.
But while the Erie job was a good fit professionally, Szychulski desired to work in a more urban setting and with an orchestra that had a stronger connection to the community. Hearing about the SSO opportunity through the musical grapevine, she became intrigued, applied, and immediately became impressed with the hiring committee’s questions, as well as the answers to her queries.
“They had a headhunter, and she asked all the right questions to make sure I knew how to do my job,” Szychulski explained. “They took the time to get to know me as a person, and looked to see that Kevin and I would be compatible as partners.”
During the hiring process from February to May of this year, Szychulski saw that the SSO was looking for a long-term relationship.
“This was an organization that wanted me to be happy, fit into their culture, and really flourish with them,” Szychulski recalled. “It was all about the good fit and how we would all get along together.”
With all parties agreeing it was a good match, she officially started on Aug. 1.

Being in Harmony
Because orchestras in different regions of the country aren’t competing with each other, many marketing ideas are shared, but it’s the creativity on the part of the local symphony management to correctly collaborate with others in the community that is the key to success, she told BusinessWest.
One of those shared ideas worked well in Erie, she went on, referring to something called the Beat Beethoven 5K road race, complete with a man dressed as the famous composer setting the pace for runners from the Erie Running Club and other fitness enthusiasts in a creative collaboration with a different demographic, set to the sounds of Beethoven’s famous Fifth Symphony. The opus, which happens to be 30 minutes and 17 seconds long, offers ample time for most runners to finish a 3.1-mile race and receive a voucher for a ticket to an Erie Philharmonic concert.
Similar imaginative and collaborative efforts could be employed in Springfield to help the SSO reach and surpass its goals for raising money — and awareness, said Szychulski. With 50% of revenue for a typical orchestra directly attributed to ticket sales and subscriptions, the SSO has to raise the rest through donations, sponsorships, tuition to the youth orchestra, and other means.
To that end, the orchestra launched the Forever Symphony, Campaign for Permanence three years ago. It has enabled the organization to raise $7 million for an endowment, said Szychulski, adding that, before she arrived, Springfield’s local arts directors supporting the creation of a proposed cultural district had already begun meeting monthly to share programming schedules and ideas for how to support each other collaboratively.
Internally at the SSO, mid-October saw the first scheduled monthly meeting of the orchestra board’s marketing committee made up of board and staff, including Jane Clark, the new director of development, and Ann Rasmussen, the new director of marketing.
And while collaboration with outside entities isn’t anything new to the SSO, Rhodes feels that Szychulski’s past engagement in unique partnering efforts will be a huge asset to the organization.
“And Kevin’s product is beautiful,” Szychulski said, adding quickly that there will be no altering of what Rhodes has been producing so successfully for years. However, she will now be able to plan around what he does on stage and, through community collaborations, grow and diversify the audience and create more connections between the orchestra and the community.

The Finale
Szychulski told BusinessWest that she believes she’s found a good fit personally and professionally, and she’s ready to take her competitive nature, forged while selling Girl Scout cookies, and use it to strike a chord with as many different demographic groups as she can in the Pioneer Valley.
“It’s like the slogan we put on some of our PR materials: ‘there’s a little bit of symphony in everyone,’” she explained, adding that it’s her unofficial job description to prove that point.
As for Rhodes, he’s looking forward to working with Szychulski to propel the SSO to new heights.
“As we adapt to an entirely new marketing paradigm, Audrey’s expertise and enthusiasm for remaining on top of trends is going to be absolutely integral to the future success of the orchestra,” he said. “I’m very confident we’re in great hands.”

Oops, I Did It Again 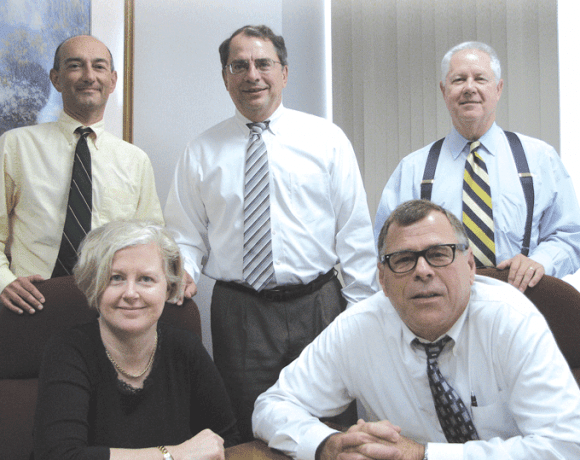