The Institute for Applied Life Sciences at UMass Amherst 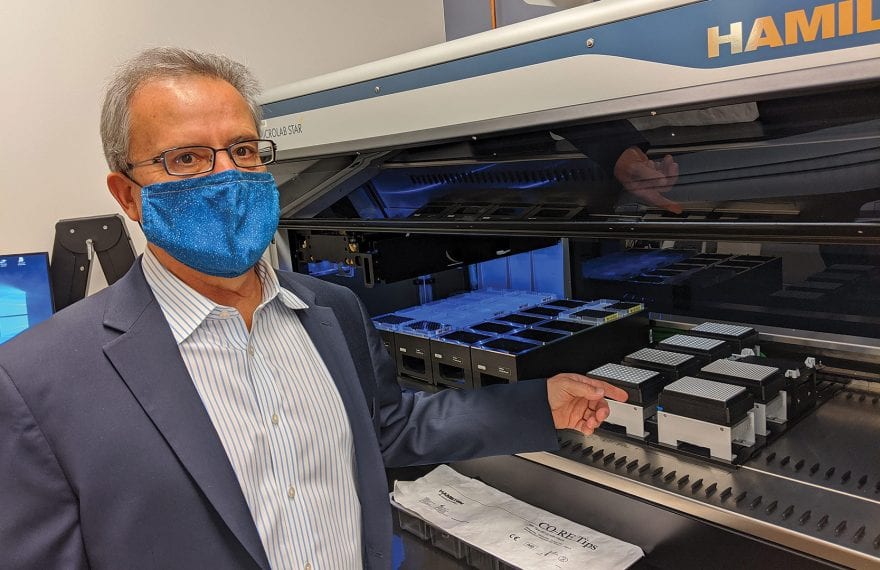 At a Time of Crisis, Collaboration Was Key to Meeting the Most Pressing Needs 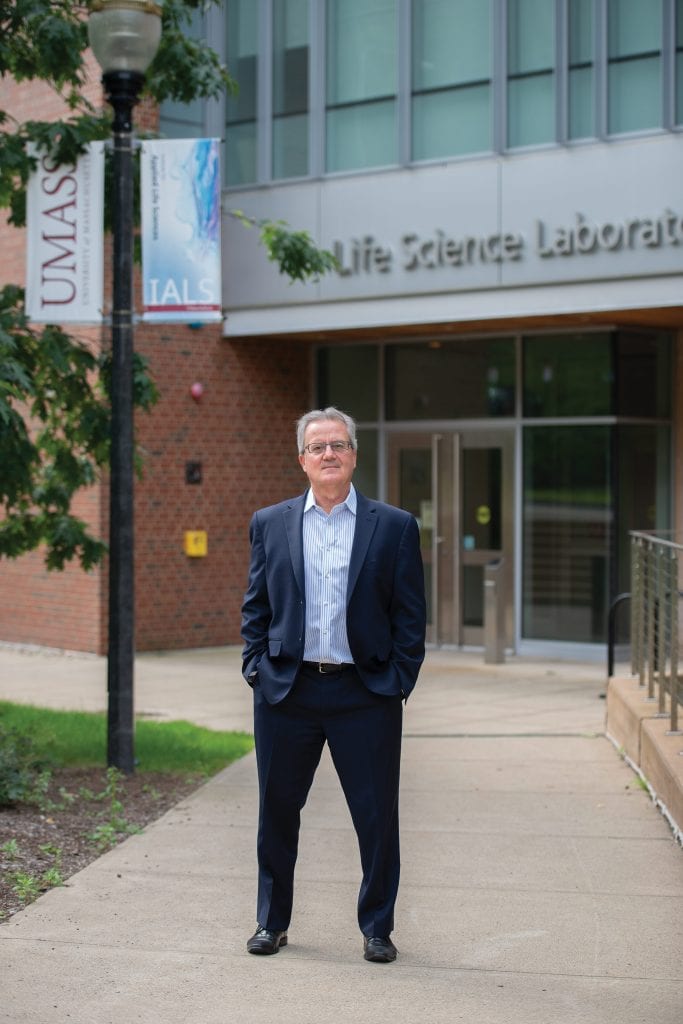 In mid-March, when much of the U.S. was starting to hunker down, Peter Reinhart had a feeling he wouldn’t be — and neither would many of the people he works with.

“We didn’t want to be sitting at home watching this pandemic unfold without doing something,” said Reinhart, director of the Institute for Applied Life Sciences (IALS) at UMass Amherst, a facility launched in 2013 with the goal of accelerating life-science research and advancing collaboration with industry to shorten the gap between scientific innovation and technological advancement.

COVID-19 presented a unique opportunity to do exactly that, under time constraints that truly meant something, because people were dying every day. Take, for example, the work at IALS to develop a low-cost face shield for rapid production.

“We are a platform organization that caters to all departments on campus — nursing, computer science, natural sciences, public health, engineering,” Reinhart said, naming just a few. “Because our institute creates an interface across all these different organizations that are usually siloed, it’s much easier for us to pull together nursing staff, molecular biologists, and engineers, and say, ‘we need to make face shields in the next seven days. How can we do it?’ And they did.”

It took a few tries to get the design right, but the team eventually partnered with K+K Thermoforming of Southbridge to fabricate and distribute 81,000 face shields throughout the region. About 50,000 more followed in a second batch, all able to be shipped flat, 300 to a box, and assembled in 20 seconds by the user. Partly because of the logistics of billing and partly because the need was so pressing, IALS essentially gave the shields away.

“The differentiator between UMass and every other organization I’ve ever worked at — in both industry and academia — is this spirit of collaboration,” Reinhart told BusinessWest. “I’ve been at organizations where it’s very hard to get collaborations working across departmental boundaries. It’s much more self-contained, focused on individual greatness as opposed to collective greatness. That’s the difference I see at UMass Amherst — people across organizational boundaries will jump in and help you.”

When the pandemic hit, IALS’ culture and understanding of interdisciplinary work was especially valuable, and eight or nine response teams began working on individual projects, he explained, “some with greater and some with lesser success, but all of them with the best of intentions: to make a difference with the problems that were facing us as a society, using whatever resources we could apply to them.”

“We didn’t want to be sitting at home watching this pandemic unfold without doing something.”

One early project took aim at a worldwide mask shortage. Not all face masks can be safely sterilized and reused, but Professor Richard Peltier’s team demonstrated that hydrogen-peroxide sterilization for N95 respirators does, in fact, work. Using state-of-the-art pollution instruments to measure whether microscopic particles can pass through the mask after it’s sterilized, the results showed no real difference in filtration between a new mask and a sterilized one.

In another project, Baystate Health resident physician Dr. Mat Goebel and respiratory specialist Kyle Walsh contacted the College of Engineering for help with ventilators. Regular, 10-foot ventilator cables were on extreme back order, and longer cables, which would provide added safety to staff by increasing distance and reducing the need for PPE, did not exist. UMass engineers were able to fabricate a 50-foot cable that was compatible with Baystate’s ventilators, and contacted Michigan-based Amphenol Sine Systems, who agreed to design and fabricate the longer cables.

“It’s a really intriguing model,” Reinhart said of the collaboration that went into each project. “It could be a model of the future, to allow interdisciplinary work to function on a campus that by necessity has these organizational boundaries.”

Another team set up local production of viral transport media (VTM) for COVID-19 clinical testing. As testing ramped up nationwide, the solution used to keep COVID-19 samples safe during transport was in short supply, and local hospitals contacted Reinhart for help. 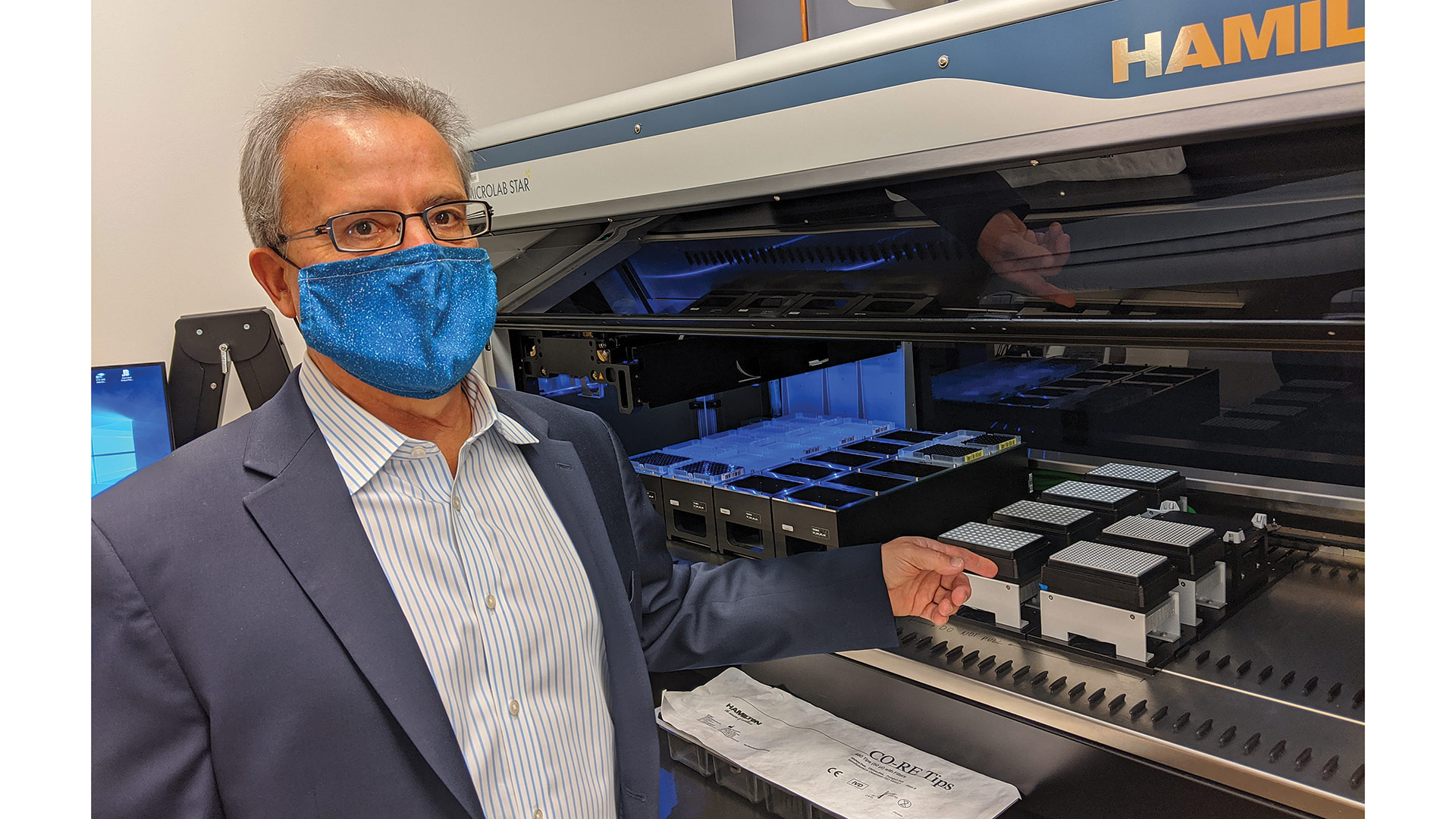 Peter Reinhart with some of the equipment that can process thousands of COVID-19 tests every day on the UMass campus.

Within one week, IALS had produced, tested, and distributed enough VTM to test 600 patients, before scaling up production and delivery to meet the needs of frontline workers across the state. The campus has enlisted more than 60 volunteers who produce, test, package and distribute VTM, and have provided hundreds of thousands of vials to seven regional hospitals and healthcare facilities and the Massachusetts COVID-19 Response Command Center.

“That project has grown because the need was much larger than anticipated,” Reinhart said. “It was good to see we had so many people prepared to put in their time to help, and great to see that people who had run out of the ability to test were back doing testing. We ended up doing a good thing.”

The latest project is a high-throughput testing facility where IALS can generate up to 5,000 COVID-19 tests per day, enough to have all students, staff, and faculty tested at least once a week.

“We hope this becomes a regional resource that serves the community with rapid testing,” he said, noting that a regional testing bureau charges between $120 and $160 per test, or between $2 million and $3 million per week at the volume UMass can now conduct in-house.

“Imagine what that does to your campus finances,” he went on. “We can do it at 10 cents on the dollar if we do it ourselves. Obviously, you need a major investment in staff, space, and equipment, but once we’ve made that investment, we can do much less expensive tests, they’re completely under our control, the turnaround time is super fast, and we can quickly put people into quarantine and do contact tracing.”

“The differentiator between UMass and every other organization I’ve ever worked at — in both industry and academia — is this spirit of collaboration.”

As time goes on, Reinhart said, IALS — and all the departments at UMass with which it collaborates — will continue to look for places it can make a difference. One ongoing effort involves the development of a clinical testing lab that can identify individuals with antibodies that can neutralize the COVID-19 virus. “Students can donate a sample, and we’ll tell them whether we’re making antibodies or not.”

These efforts to address the COVID-19 crisis — and other projects yet to be determined — will continue, he added, because the pandemic is “far, far, far from over.”

While Western Mass. has been fortunate with its infection numbers, the virus is still spreading at the same rate it was in March, he went on, and a combination of the upcoming flu season and “PPE fatigue,” among other factors, may yield a second spike of some kind. “I think we’re in for a period of increasing difficulties.”

That said, it’s been an immensely gratifying seven months at IALS.

“Everything was gloom and doom, everyone was at home, and it seemed that every news item you picked up was another downer on how dire things were,” he recalled of the situation back in March. “Creating a few feel-good stories and giving our students and faculty a chance to contribute to something positive was very helpful to them. I know it was for me.”

But it’s not how these dozens of unsung individuals feel personally that makes them Healthcare Heroes. It’s the difference they’ve made in the fight against a virus that has proven a persistent, resilient foe.

“We weren’t good at logistics; we were engineers,” Reinhart said of efforts like distributing those tens of thousands of face shields. But that effort demonstrates collaboration, too. “It was exciting. People were excited about throwing their weight behind a project that had immediate impact.”

Impact that will only continue as a truly challenging 2020 turns an uncertain corner into 2021.