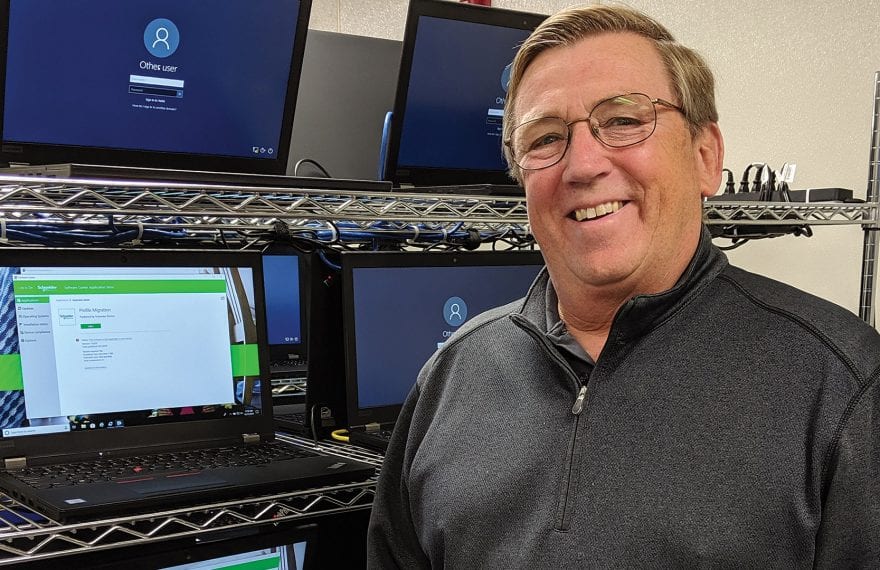 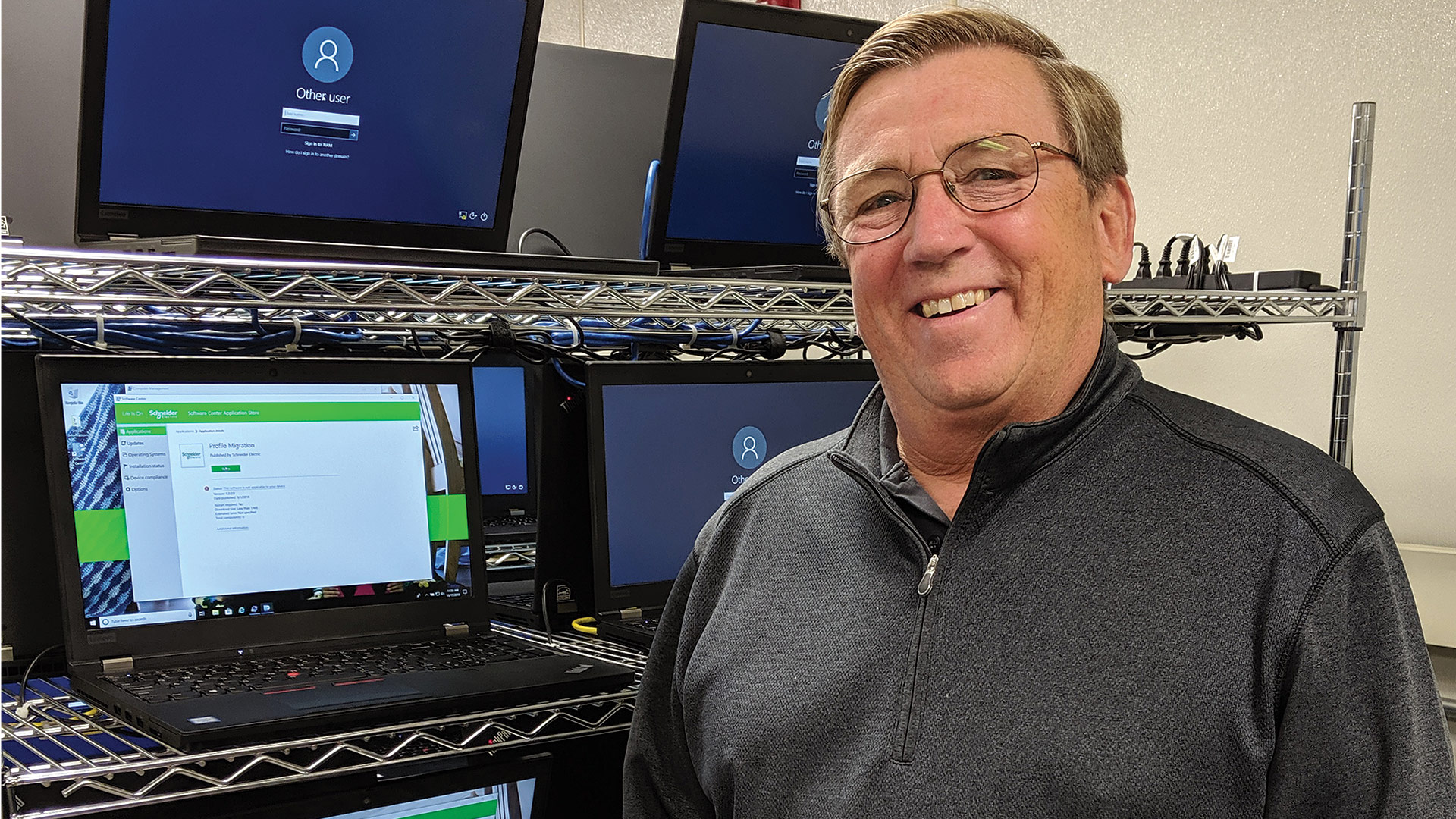 From its humble beginnings in a Southwick basement 40 years ago, Whalley Computer Associates has become a technology company with remarkable reach, providing a host of services to more than 3,000 business clients, ranking WCA in the top one-tenth of 1% of all computer resellers by sales volume. That growth has come through constant evolution in response to industry needs and trends, but also simply by making life easier for clients, who increasingly demand no-fuss solutions to their network needs.

Paul Whalley knows his company might have a larger brand presence in a larger city.

“Our biggest challenge, marketing-wise, is being in Western Mass. — because you know what they think of us in Eastern Mass.,” he said. “And then we’re in a town called Southwick, and if you look up Southwick, you see a farming community, and the name of the company is a family name. So I think people have an image of my brother and me with pitchforks, milking the cows in the morning and feeding the chickens when we get home, and maybe selling one or two computers.

“But that perception isn’t what people get when they walk through here,” he quickly added, and for good reason.

Out of its 62,500-square-foot headquarters in Southwick — it also maintains facilities in Westfield, Milford, and Providence, R.I. — Whalley Computer Associates (WCA) has grown to be the 175th-largest computer solution provider in North America. That’s among more than 200,000 such companies, placing Whalley squarely in the top one-tenth of 1%.

What started as a software-consulting firm is now an original equipment manufacturer (OEM), building computers and other devices for 25 brands, a few of them major national names. In so doing, WCA is the largest reseller of Lenovo products in the U.S. and has been the top reseller for Dell in the Northeast many years.

“I think people have an image of my brother and me with pitchforks, milking the cows in the morning and feeding the chickens when we get home, and maybe selling one or two computers. But that perception isn’t what people get when they walk through here.”

Initially, the firm served customers mostly based in Massachusetts and Connecticut. However, in the past decade, it has expanded its range, providing technology products and services across all of New England and Upstate New York.

It’s not easy to pin down what WCA does in a few words. Early in its history, it focused on imaging and configuration, delivery and deployment, and maintenance and repair. But today, services include pre-sales consultation, system design and implementation, infrastructure, data storage and management, client and server virtualization, disaster recovery and business continuance, VoIP, wireless cloud computing and cloud infrastructure services, server, storage, and network health checks — and more.

The company provides services to more than 250 school systems, 50 colleges, and 3,000 businesses, while continually expanding its range of offerings as the technology world continually evolves.

Up from the Basement

Like many high-tech success stories, WCA grew from humble beginnings. As a part-time programming consultant in the Agawam school system in the 1970’s, math teacher John Whalley — Paul’s brother — purchased a small software-consulting firm. Working after school and during the summer from his Southwick basement, he built a small customer base.

Then, in 1979, incorporating his experience teaching his students programming on the school’s new computer, he started Whalley Computer Associates. He moved to new quarters in Southwick twice, all the while trying to convince his brother to come on board.

Paul started helping out part-time, and in 1985, they both dove in full-time, with John (still the company’s president) leaving his teaching job and Paul resigning from his position as a programmer at MassMutual, in the process becoming WCA’s fourth employee. The acquisition of customers such as Northeast Utilities, United Technologies, General Electric, and Cigna helped drive the company’s rapid growth. 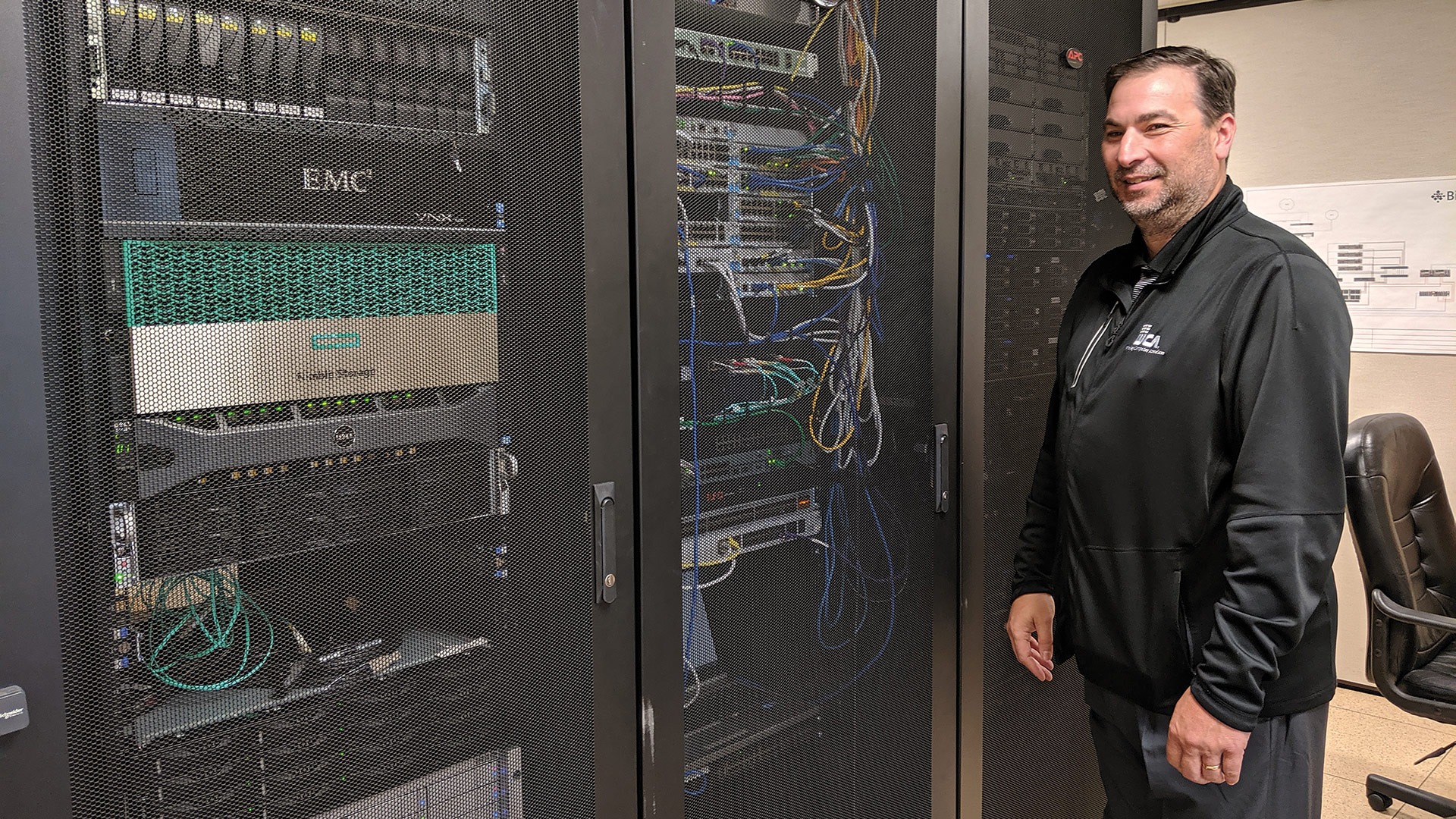 That growth necessitated several moves in Southwick, from John Whalley’s cellar to a former hair salon, to a 1,500-square-foot office, to an 18,000-square-foot building on Route 202, to the current headquarters on Whalley Way, in the industrial-park section of town, built in 1999.

Through all that growth, Whalley said, the idea has always been to make life easier for customers. For example, the Southwick facility has hundreds of linear feet of ‘bench space’ where computers and other devices are not only built, but tested by connecting directly with the client’s network.

“The benefit for the customer is they can just walk to the desk, unplug the old one, plug in the new one, and walk away. Otherwise, they’d have to go the desk and spend 15 minutes with the product and get it fully configured on their network. It’s much more efficient and cost-effective, and allows them to work on more strategic things. Their IT staff doesn’t really want to be doing this. They’re certified at a pretty high level and want to be doing more challenging things.”

Dean LeClerc, director of Engineering, pointed out one bench that was being used to test Chromebooks headed to a Holyoke school.

“They leave here as if it had already been brought to Holyoke and connected with their network and tested,” he explained. “So they’re opening a box they already know works on their network.”

LeClerc added that Whalley can even set up each device for the individual student who will be using it, and a WCA representative will often visit sites to hand them out to specific users.

Early in BusinessWest’s recent visit, LeClerc showed off one of the facility’s newer features, an engineering training lab outfitted with WCA’s most commonly sold storage devices, switches, and servers — a half-million-dollar investment in making sure the engineering team stays on top of technology.

In addition, if a customer is in a bind with equipment going down that could affect the flow of business, the lab might loan a piece of equipment for a day or a week to get the customer up and running again immediately instead of having to wait for shipment of a new product.

“If you listen to anybody in technology, they’ll tell you the majority of problems come when people aren’t being vigilant and open e-mails they shouldn’t be opening.”

“So we try to balance it,” he said. “This is our lab for our engineers, but if we have a couple extra pieces of equipment that we know we can bring out to get a customer back up and running, we can do that.”

WCA has evolved in other ways as well, Whalley said, mostly in response to changing industry needs and trends. Take security, for example, in the form of building security, surveillance cameras, access-control cards, and other products and services.

“We weren’t even thinking about that stuff 10 years ago, but it’s becoming a bigger piece of our business now,” he said, adding that WCA has a contract with the Commonwealth of Massachusetts as an ITC71 vendor for security systems.

Cybersecurity is another growing niche, he noted. “We’ll do assessments, look at the network, and help them prevent someone from attacking them. Even the biggest companies get attacked. We’ll build up a robust system with a lot of redundancy so if something does happen, whether it’s ransomware or malware or a virus, they experience no — or very little — downtime.”

He recalled two incidents, one involving a customer of WCA’s managed services, who had invested in a needs analysis and network cybersecurity protection and monitoring. “Within seconds of a ransom attack, we shut everything down, isolating the problem to one desktop, and brought the whole network back up, so they were down for only minutes, and then worked on clearing out that one bad desktop where the ransomware came in.”

Meanwhile, another local company, not a customer of those managed services, got attacked, and it took three weeks and 100 hours of engineering time to get it back up and running, Whalley noted.

“One computer down for an hour, versus the entire network down for three weeks. One did the preparation and the engineering ahead of time to have a robust defense of their system, and because it was monitored at the point, we immediately knew there was a problem and could quarantine it and get the rest of the company working again. That’s the power of having the combination of the managed-service group and Dean’s engineers.”

WCA also sends a trainer to conduct security-awareness trainings for clients, because so many breaches result from human mistakes, he noted.

“If you listen to anybody in technology, they’ll tell you the majority of problems come when people aren’t being vigilant and open e-mails they shouldn’t be opening. So we offer a very affordable service, coming into a company and going through a two-hour presentation on how to stay out of trouble and how not to make those mistakes that put your company in jeopardy.”

Staying atop such trends and others is critical, which is why WCA presents the annual Foxwoods Technology Show, the biggest technology event in the region solely for IT professionals. Every year, it attracts more than 1,000 attendees, including 300 representatives from 60 different manufacturers.

In a business market where 80% of computer companies fail in less than five years, WCA employs more than 150 computer professionals and continues to grow its client base. It’s not exactly a small company, but tries to maintain a small-firm spirit, through events like monthly breakfasts, lunches, and birthday parties, as well as kickoffs of baseball and football season, where employees wear their favorite teams’ jerseys. Just this month, employees gathered to celebrate WCA’s best September ever.

“We pride ourselves on being a family business,” Whalley said, with the concept of family extending beyond the company’s founders, reflecting a general spirit of camaraderie in Southwick as well as the other sites.

At the same time, its work is serious business — and a long way from milking cows and feeding chickens.

“Our challenge is to stay as ahead of the curve as we can, but provide the stability and assurance to our customers that we’re not just jumping onto the new shiny penny and abandoning our core business,” LeClerc said. “We’re large enough that we can afford to do that. We have enough resources to stay ahead of the curve but still deliver traditional services to our customers until they’re ready for a change.”

Whalley agreed. “We try not to jump around from one thing to the other; we just try to add additional capabilities and continue to be exceptional at the legacy of services and products that we provide.”