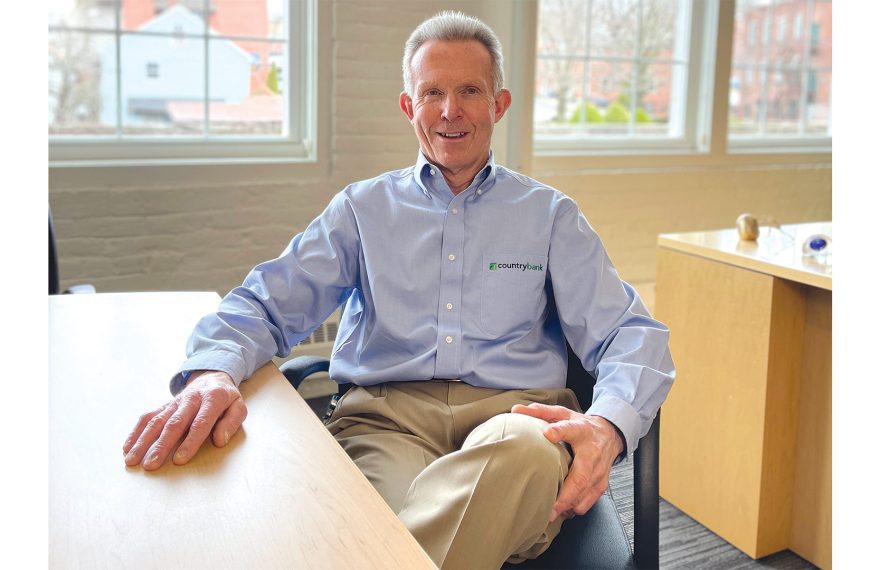 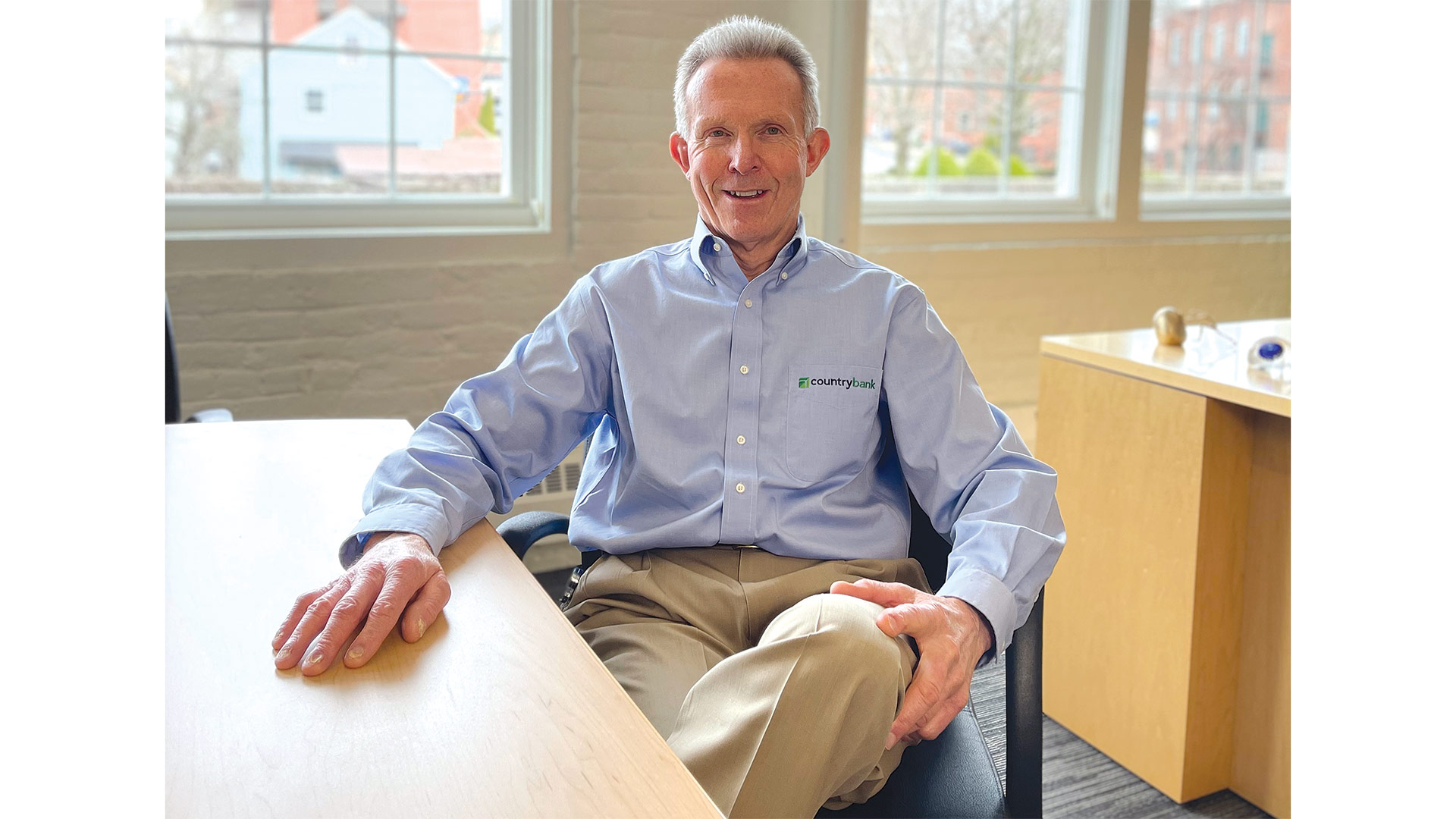 Paul Scully says loan demand was strong in 2022 despite the interest-rate hikes.

A constant flow of interest-rate increases didn’t exactly make borrowers happy in 2022, Paul Scully said, but it didn’t keep them from participating in the economy.

“I think, coming out of the pandemic, there was a pent-up desire to reconnect, within business circles and in communities. We had a terrific year for lending,” said Scully, president and CEO of Country Bank, which opened a new business production office in Tower Square in downtown Springfield last year. “That’s worked out beautifully for us. Our loan production in 2022 was the greatest level ever — we originated over $400 million in loans, almost $170 million in net growth.”

A broadening of the focus made a difference, Scully said. “Country Bank has been known as a commercial real-estate lender; that was our niche. We’ve gotten more deliberately into C&I lending from 2021 going into 2022, and have done some significant C&I deals: $10 million, $20 million, $30 million deals. We have the expertise in house to be able to do that. And based on our capitalization — we’re one of the highest-capitalized banks in the Commonwealth — it gives us the opportunity to be able to grow along with businesses and customers.”

bankESB’s holding company, Hometown Financial Group, continued to grow in 2022 as well, with the acquisition of Randolph Bancorp and its subsidiary, Envision Bank, which was merged into Abingdon Bank, another Hometown holding, more than doubling its presence on the South Shore.

“The most interest-sensitive customers are residential borrowers, and as residential mortgage rates rose throughout 2022, we saw the volume of residential lending, especially refinances, drop dramatically. Commercial lending is definitely impacted as well, though not to the same extent.”

“We’re in a very low-margin industry,” said bankESB and Hometown President and CEO Matt Sosik, explaining why growing geographically to create scale is an important part of the company’s strategy. “Any business person will tell you costs are rising, whether it’s insurance, utilities, fuel oil, you name it — and, of course, wages. It’s the same for us, and if we’re not growing, we’re going backward.”

That said, “we had our best earnings year ever in 2022, and it wasn’t even anywhere near second place,” Sosik noted.

Part of that was the fact that interest rates for borrowers rose so quickly that the lag between those rates and the rates paid to depositors generated income for banks. But heading into 2023, margins are again shrinking as deposit costs rise, and a slowing economy has some people worried about a possible recession, which would further soften the loan market.

“The most interest-sensitive customers are residential borrowers, and as residential mortgage rates rose throughout 2022, we saw the volume of residential lending, especially refinances, drop dramatically,” Sosik said. “Commercial lending is definitely impacted as well, though not to the same extent.”

“Obviously, the residential market became soft because of what’s going on with rates as the year progressed,” he told BusinessWest. “And frankly, the commercial lending market became softer because people don’t know what the economy is going to do going forward; they’re keeping their powder dry, as they say. They don’t want to make big decisions if they don’t know how the economy will turn out. 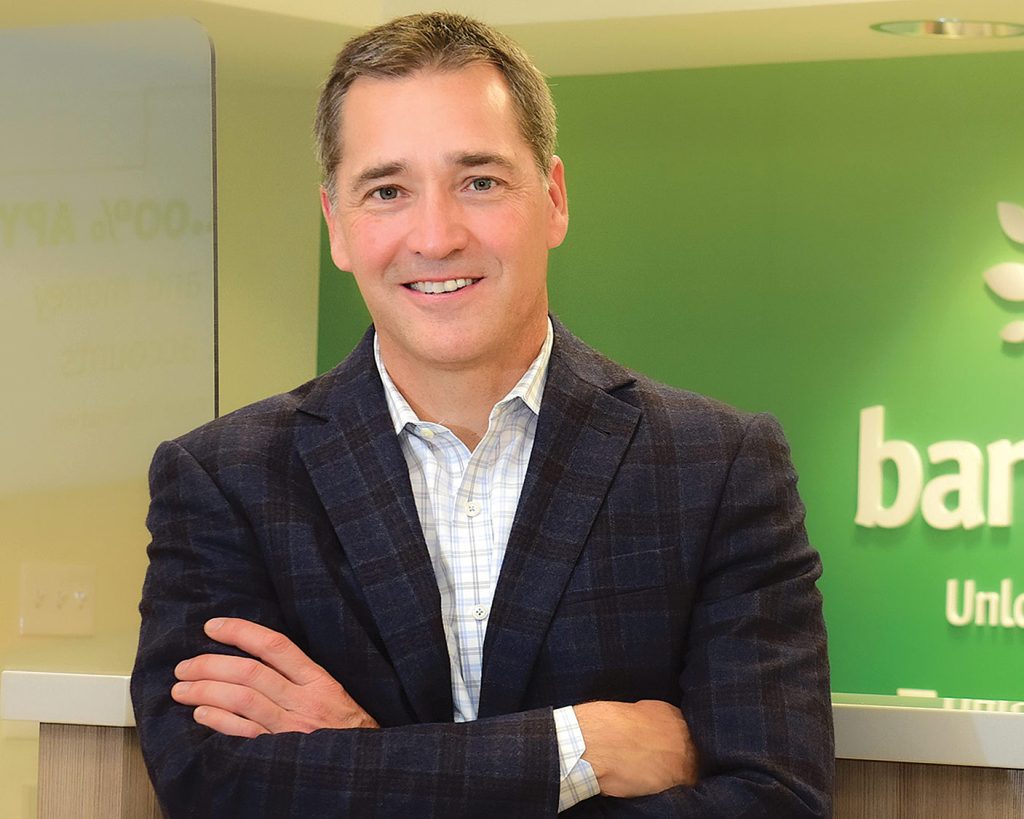 “This year, everyone is holding their breath to see what the outcome will be,” he went on. “Will the Federal Reserve be able to engineer a soft landing? Last year, we thought we were in for a couple of rate increases, but the rates went much higher than everyone thought they would. When you do strategic planning, you make assumptions about what the rate environment will be, and we were all wrong last year.”

This year, economic projections include not only the rate issue, but whether unemployment will rise, what the impact of energy costs will be, and much more. On the topic of energy, Worden said the region has seen a mild winter so far, so that could help people weather the still-high costs.

“I guess if people knew what was going to happen, they could make a lot of money. From a banking standpoint, a lot of loan customers don’t want to make decisions until they know where we’re all situated.”

Worden lend some recent historical perspective to what banks are seeing when it comes to consumer and business behavior, starting in 2020, at the height of the COVID-19 pandemic.

“For a few months, Americans were saving at a rate that hadn’t been seen in 80, 90 years. They were saving money, they weren’t going anywhere, there was a lot of stimulus, both federal and state, and banks saw their deposits increase tremendously because people were sitting on a lot of cash.”

While that’s generally not a bad thing for banks, he said, cooperative banks not only pay for FDIC insurance, but also pay premiums on the private Depositors Insurance Fund, which covers deposits beyond the $250,000 the FDIC covers. “All the deposits coming in but no loan demand cost us money in a way; we were paying insurance on all the deposits, but couldn’t put the deposits to work.”

In the second year of the pandemic, people were starting to spend again, take vacations, and work on their homes, while most stimulus had ended, so deposit levels crept toward a more typical environment, and loans picked up as well. And while the current interest-rate environment has made some potential borrowers skittish, Worden said it’s important to note that those rates are still historically low — yes, a fixed 30-year mortgage rate is north of 5% right now, but a generation ago, it was 17% or higher.

“I think it’s a mental thing with borrowers,” he went on. “Rates were so low for an extended time, you get used to that mentally, and it’s hard to readjust when they start going up again.”

“Last year, we thought we were in for a couple of rate increases, but the rates went much higher than everyone thought they would. When you do strategic planning, you make assumptions about what the rate environment will be, and we were all wrong last year.”

Still, Sosik said, the housing market remains strong due to the fundamentals of low inventory levels and those still relatively low interest rates. But especially with remote work taking hold, “people who may be inclined to think about moving may not want to give up their 3% mortgage.’

“And there’s not a flow of new inventory, so we have this interesting dynamic where rates are rising, but it’s not impacting home prices materially,” he added — especially for a class of higher-income cash buyers who aren’t interest-sensitive.

“There’s a lot of liquidity in the economy, a lot of it funneled toward the residential market,” he said. “Volume is still good, but inventory is still low. Everything is still working; it’s just more expensive to borrow.”

Scully said Country continues to see significant loan demand early in 2023 — “not at the level of 2022, but we are seeing good pockets of business on the commercial side.” Meanwhile, to help customers purchase homes, the bank kicked off a homebuyers’ program in the fall featuring no money down and no private mortgage insurance in select areas.

“We’re still seeing a decent residential market, not as robust as it had been, but still decent,” he said. “On the commercial side, we’re still looking at some interesting deals. But everyone is holding their breath when it comes to construction lending for large projects.”

That said, investors are seeing positive signs, he added, including a comeback for retail and hospitality. “The restaurant industry is starting to have workers come back.”

Meanwhile, Scully added, “unemployment is still pretty low, and we’re not hearing much of layoffs, so hopefully we’ll see the Fed reach its level, see that interest-rate changes have impacted inflation, and we may be starting to see the other side of this sometime in 2023.” 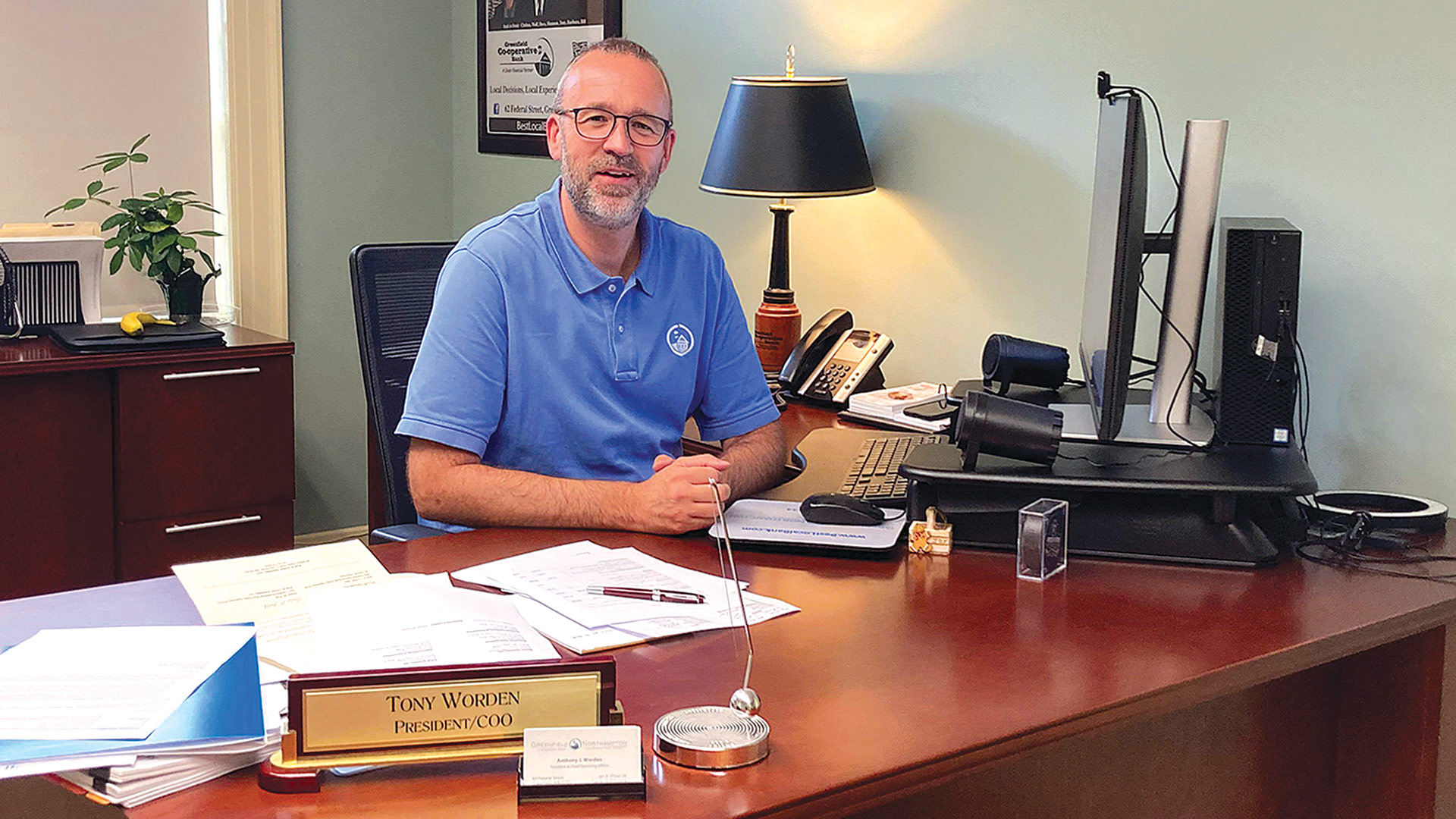 Tony Worden says everyone is hoping the Fed helps the economy to a “soft landing” with its rate policy aimed at reversing inflation.

Worden said no one really knows where the economy will turn, though there are hopeful signs. “As we see inflation numbers coming down, we’ll start to get an idea whether what the Fed is doing is starting to work. And maybe they’ll start pulling back on rate increases. If they can pull off that soft landing, we might see people reinvesting in business, buying equipment, buying new properties. But I think everyone is waiting a little bit.

“When you have a good economy, banks do well; people are out investing, buying, selling, doing things,” he added. “When the economy is bad, banks struggle because no one’s out doing anything.”

The higher-than-usual heating costs that impact every homeowner affect bank employees as well, Scully said, which is why Country recently gave a $750 stipend to all its employees to mitigate those impacts, and other inflationary pressures.

But Country isn’t taking its focus off the community at large, recently adopting the tagline “made to make a difference,” which applies not only to customers and business clients, but to the community as well, where the bank has focused much philanthropic energy over the years to needs like healthcare and food security. In 2022, the bank donated close to $1.3 million, a year after donating a total of $1 million to two major food banks on top of its other giving.

Scully said the pandemic shed a spotlight on basic human needs, not only for banks, but their employees, who, at least in Country’s case, have been more engaged in recent years.

“We’re still seeing a decent residential market, not as robust as it had been, but still decent. On the commercial side, we’re still looking at some interesting deals. But everyone is holding their breath when it comes to construction lending for large projects.”

“We learned a lot about ourselves and humanity during the pandemic, and we have a lot of staff members who really flourished in the sense of being able to volunteer and give time to the community,” he explained. “This what our brand us all about.”

Worden said Western Mass. is fortunate to be home to numerous locally owned banks that are active in their communities by supporting nonprofits through direct donations and volunteer efforts.

“In other parts of the country, this isn’t a thing,” he said. “But up and down 91 are all these good, local, community banks, and we’re all doing what we can do for the community. Obviously, we want to make money; that’s how we stay in business and give raises to our employees and hire new employees. But when Western Mass. does well, we all do well.”

bankESB recently announced that a fundraising drive raised $35,000 for local food pantries, part of its robust charitable giving program known as the Giving Tree, which reflects the bank’s commitment to making a difference in the neighborhoods it serves.

“We try to give back to all the communities we’re in, and we pointedly give back to those in need, things like food insecurity, for both children and older folks,” Sosik said. “The objective of the Giving Tree campaign is around $1 million a year — giving that back to the communities we serve and trying to make a difference for those who truly need it.

“Food insecurity is a year-round problem,” he went on, “but we turn our focus on it a little more at the end of the year and make that the key part of our campaign.”

Looking out his window, Scully noted a $35 million project the bank financed. “That makes a difference for the property owner, but we want to make a difference for everyone in our community,” he told BusinessWest. “All community banks do a tremendous job with community giving, and we’re not cutting back on our giving. Our earnings may change, but we’re committed to our level of philanthropy.”