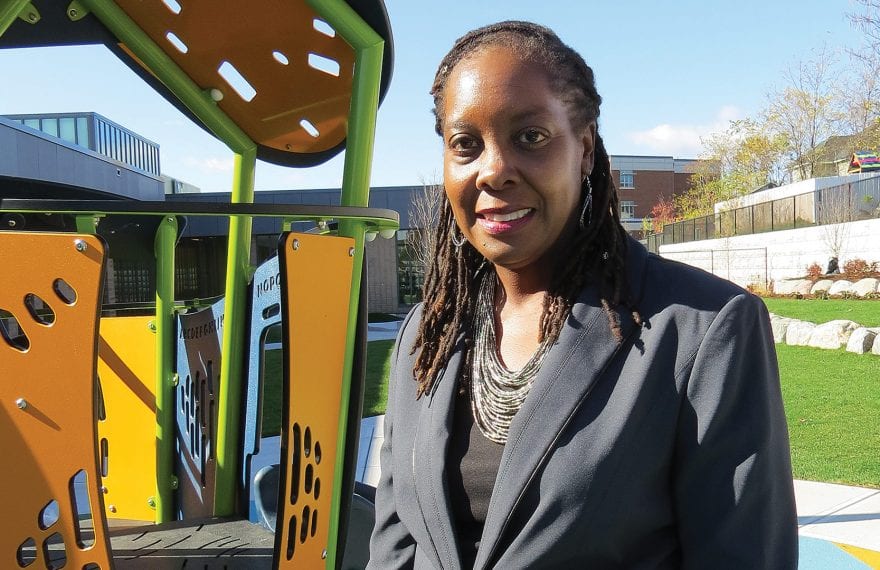 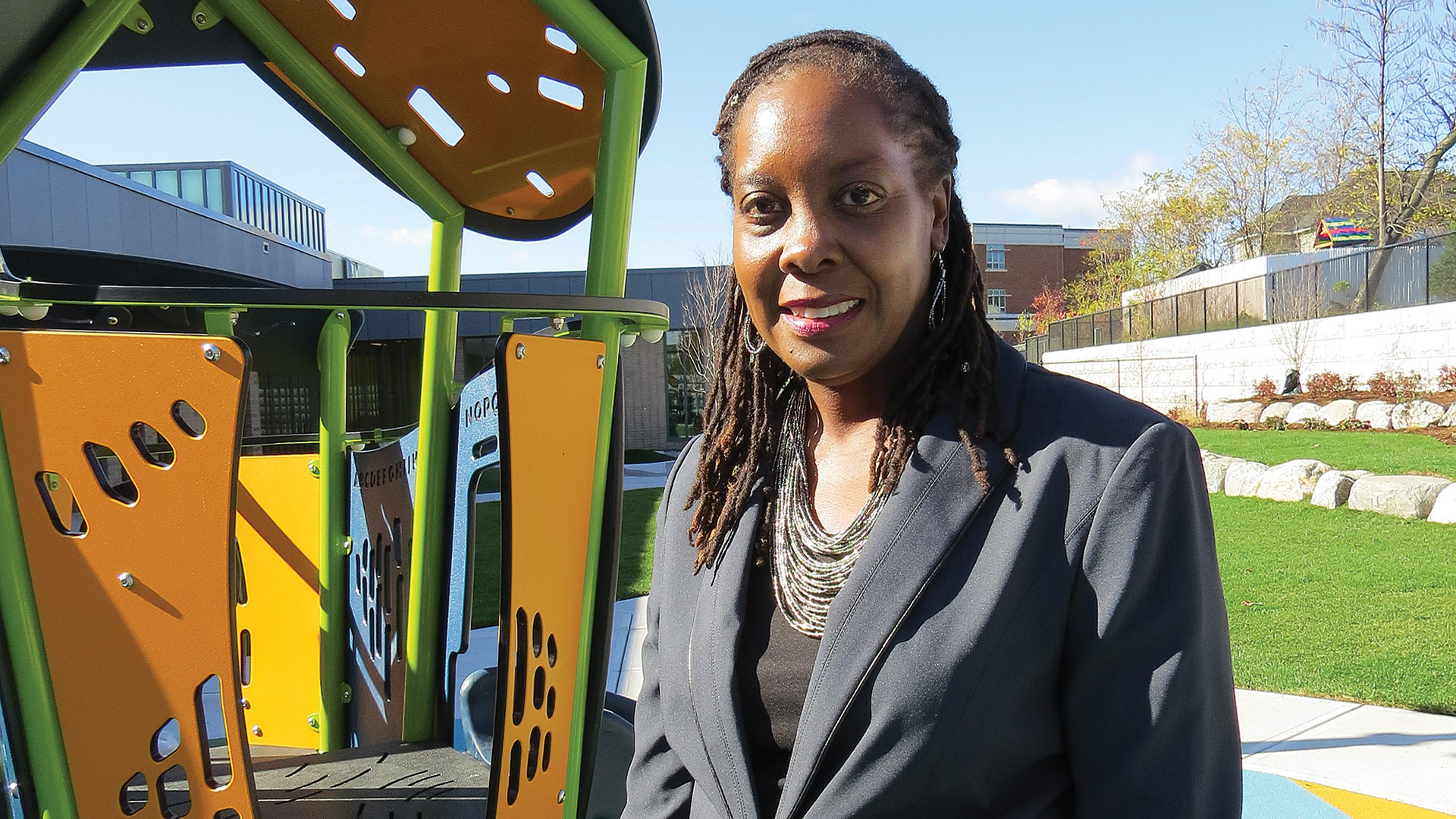 Nikki Burnett, seen here in one of the Educare center’s outdoor play areas, says the facility is a showcase of what early education should be — and what all young children deserve.

More to the point, though, she told BusinessWest, they deserve this facility, which can only be described with that phrase state-of-the-art when it comes to everything from its programs to its play areas to its bathrooms.

“Mason Square, Old Hill, McKnight, Bay, all those neighborhoods … they’re so rich in history, so they’re rich in great success stories that have come out of here and are still coming out of here,” said Burnett, the recently named executive director of the 27,000-square-foot facility, who should know; she grew up there herself. “People like Ruth Carter, who just won an Oscar for the costume design in the movie Black Panther — she’s from Springfield.

“We have to celebrate those things, and we have to model those things for our children so they can see that they have greatness in them,” she went on. “One of the very important things about Educare is that it aligns potential with opportunity. I believe all children are born with immense potential, but many do not have the same opportunity to realize that, so Educare will give them that push — it will help readjust their trajectory.”

That’s why this area of the city, traditionally among the poorest neighborhoods in the state, deserves this Educare facility, just the 24th of its kind in the country and the only one in Massachusetts, she continued, adding quickly that this building, and the Educare model itself, were designed to show decision makers and society in general what all young children deserve and what has to be done so that they can all enjoy a similar experience.

Mary Walachy, executive director of the Irene E. and George A. Davis Foundation, which spearheaded efforts to bring the Educare facility to fruition, agreed.

“The message being sent here is that it costs money to do this work well,” she said. “It costs money to fund quality at the level that children in this community and others deserve, and we can’t expect outcomes that we want from children if the investment is not there at the front end.”

Considering those comments, Educare is certainly much more than a building, and those who visit it — and many will in the weeks and months to come — will come to understand that.

Indeed, the facility set to open later this year, supported by the Buffett Early Childhood Fund and to be operated in partnership with Holyoke Chicopee Springfield Head Start, is, for lack of a better term, a standard — or the new standard when it comes to early-childhood education.

And it is, as Burnett and Walachy noted, a model — hopefully to be emulated — that incorporates everything science says young children need to flourish. This includes data utilization, high-quality teaching practices (three teachers to a classroom instead of the traditional two), embedded professional development, and intensive family engagement.

All this and more will come together at the much-anticipated facility, which will provide 141 children up to age 5 (already enrolled at a Head Start facility in that neighborhood) and their families with a full-day, full-year program that Burnett projects will be a place to learn — and not just for the young children enrolled there. 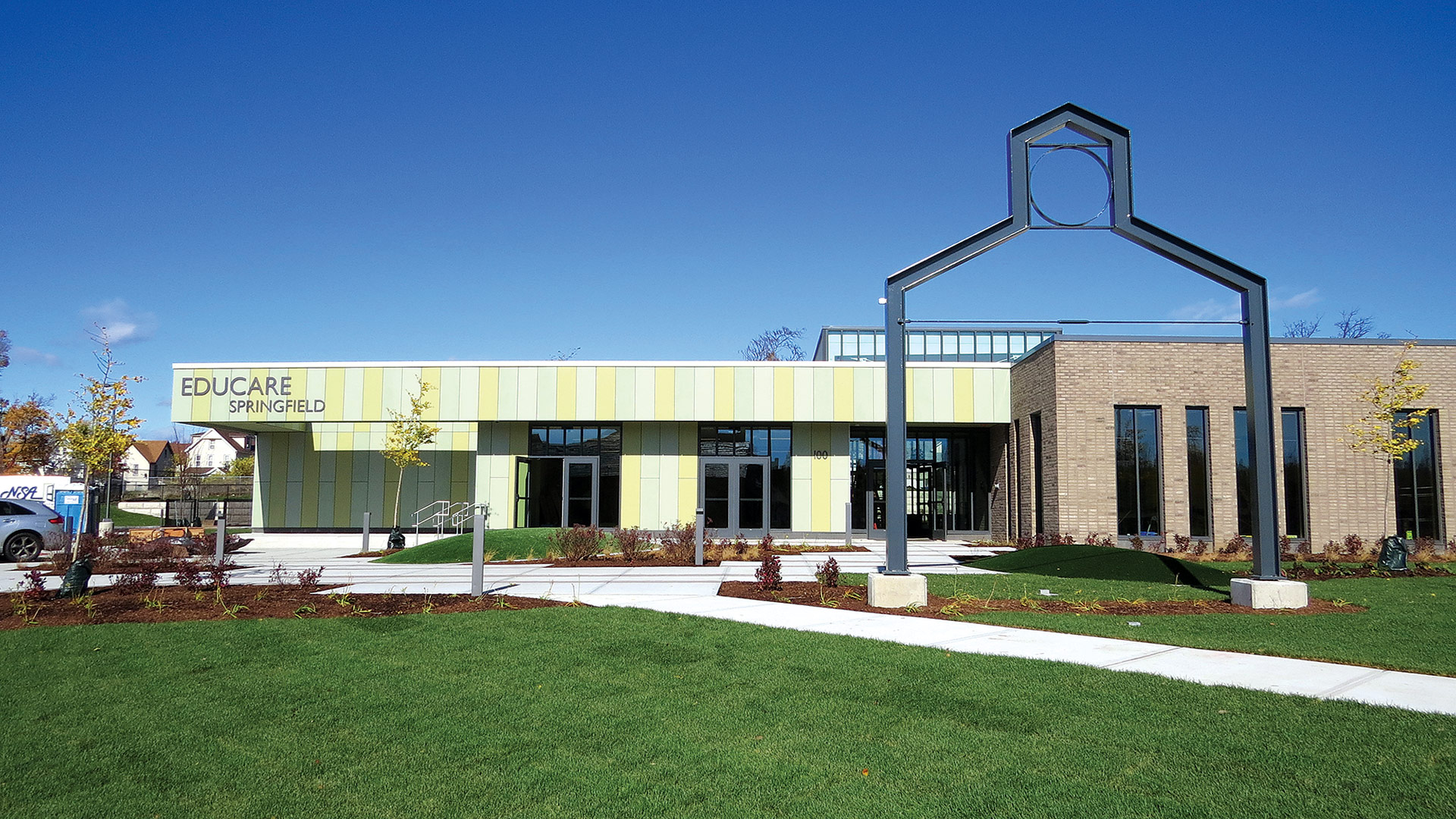 The Educare facility in Springfield is just one of 24 in the country and the only one in Massachusetts.

“Educare is going to be a demonstration site; we’re going to be able to bring in students of education, social work, counseling and therapy, and other areas from across the state and have them observe and learn our model,” she explained. “We understand that 141 children is not every child; however, what we learn here, we’re going to be able to send out — others can do what we’re doing. And on a policy level, it’s my hope that legislators can see the success of this and realize that, when they’re making out the budget, it needs to be funded so everyone can enjoy Educare quality.

“Educare is not going to be on every corner,” she went on. “But that doesn’t mean that the quality of Educare cannot be beneficial to all children.”

For this issue and its focus on education, BusinessWest toured the Educare facility and talked with Burnett and others about what this unique early-education center means for Springfield and especially those young people who walk through its doors.

Janis Santos, the longtime director of Holyoke Chicopee Springfield Head Start, recalled that, when she toured the Educare facility recently as construction was winding down, she became quite emotional.

“I have to be honest, I started crying,” said Santos, honored roughly a year ago by BusinessWest as one of its Women of Impact for 2018. “One of the construction-crew members said, ‘why are you crying?’ and I said, ‘because I’m so happy.’

“Educare is going to be a demonstration site; we’re going to be able to bring in students of education, social work, counseling and therapy, and other areas from across the state and have them observe and learn our model.”

“This is a dream come true,” she went on, adding that the facility provides dramatic evidence of how far early-childhood education has come during her career — it was considered babysitting when she got her start — and how important it is to the overall development of young people.

Tears of joy have been a common emotional response among those who have toured the site, especially those involved in this initiative from the beginning, but there have been others as well. Indeed, Burnett told BusinessWest, when the staff members assigned to the Educare center visited the well-appointed teachers’ room, many of them started clapping.

These reactions provide ample evidence that the six-year journey to get the facility built and the doors open was certainly time and energy incredibly well-spent.

By now, most are familiar with the story of how an Educare facility — again, one of only 24 in the country — came to be in Springfield. It’s a story laced with serendipity and good fortune at a number of turns.

It begins back in 2014 when an early-childhood center on Katherine Street in Springfield closed down abruptly, leaving more than 100 children without classroom seats, said Walachy, adding that the Davis Foundation began looking at other options for early education in that building.

One of them was Educare, she went on, adding that officials with the Buffett Foundation and other agencies involved, as well as architects, came and looked at the property. They quickly determined that it was not up to the high standards for Educare centers.

“Their model is ‘make it a state-of-the-art, unbelievable building to send a strong message that this is what all kids deserve,’” said Walachy, adding that, after those inspections and being informed that a new facility would have to be built at a cost of more than $12 million, the Educare concept was essentially put on the shelf.

And it stayed there for the better part of two years until an anonymous donor from outside the Bay State who wanted to fund an Educare facility came into the picture.

“This individual pledged to pay for at least half the cost of building an Educare somewhere in the country, and she was willing to do it here in Springfield,” she said, adding that the donor has written checks totaling more than $9 million for both the construction and operation of the facility.

With this commitment, those involved went about raising the balance of the needed funds — the Davis Foundation and another donor committed $2 million each, and state grants as well as New Market Tax Credits were secured, bringing the total raised to more than $20 million — and then clearing what became another significant hurdle, finding a site on which to build.

Indeed, the Educare model is for these facilities to be built adjacent to elementary schools, and in Springfield, that proved a challenging mandate. But the tornado that ravaged the city, and especially the Old Hill area, in 2011, forcing the construction of a new Brookings School, actually provided an answer.

Indeed, land adjacent to the new school owned by Springfield College was heavily damaged by the tornado, making redevelopment a difficult proposition. Thus, the college became an important partner in the project by donating the needed land.

But while it’s been a long, hard fight to get this far, the journey is far from over, said both Burnett and Walachy, noting that another $500,000 must be raised to fund an endowment that will help cover operating expenses at the school.

And raising that money is just one of many responsibilities within Burnett’s lengthy job description, a list that also includes everything from becoming an expert on the Educare model to attending regular meetings of Educare facility directors — there’s one in New Orleans later this year, for example.

At the moment, one of the duties assuming much of her time is acting as a tour guide. She even joked that she hasn’t mastered the art of walking backward while talking with tour participants, but she’s working on it. To date, tours have been given to city officials, funders and potential funders, hired staff members, like those aforementioned teachers, and, yes, members of the media.

BusinessWest took its own tour, one that featured a number of stops, because items pointed out are certainly not typical of those found in traditional early-education centers.

“I literally cannot wait to see the children in there — that will be a special moment.”

Starting with what Burnett and others called the “outside-in” of the building’s design, which, as that phrase indicates, works to bring the outside environment into the school to provide continuity and the sense that the school is part of the larger world. Thus, green, grass-like carpeting was put down in the entranceways, and green carpet prevails pretty much throughout the facility. Meanwhile, the brick façade on the exterior is continued inside the building.

Throughout the building, there are generous amounts of light and state-of-the-art facilities throughout, from the well-equipped play areas inside and out to the two sinks in each of the classrooms — one for food preparation, the other for hand washing — to the restrooms designed especially for small people.

In addition, each classroom is equipped with small viewing areas with one-way mirrors so that so-called ‘master teachers’ and others can see and evaluate what’s happening.

In all, there are 12 classrooms, seven for infants and toddlers and five for preschool. As noted earlier, they will be places of learning, and not just for the students.

Returning to that emotional tour of the Educare facility she took a few weeks ago, Santos said that, as joyous and uplifting as it was, she’s looking forward to the next one even more.

“I literally cannot wait to see the children in there — that will be a special moment,” she told BusinessWest, putting almost a half-century of work in early childhood behind those words.

She can’t wait because students will be learning and playing in a facility that really was only a dream a few years ago — a dream that came true.

It’s a facility that those students truly need, but as Burnett and all the others we spoke said, it’s one they deserve — one that all students deserve.