The Zoo in Forest Park Sharpens Its Focus 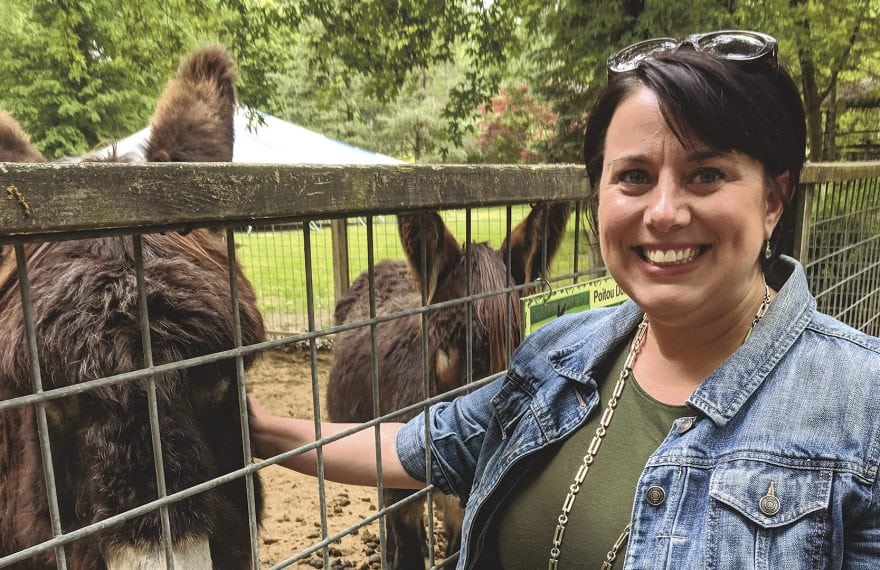 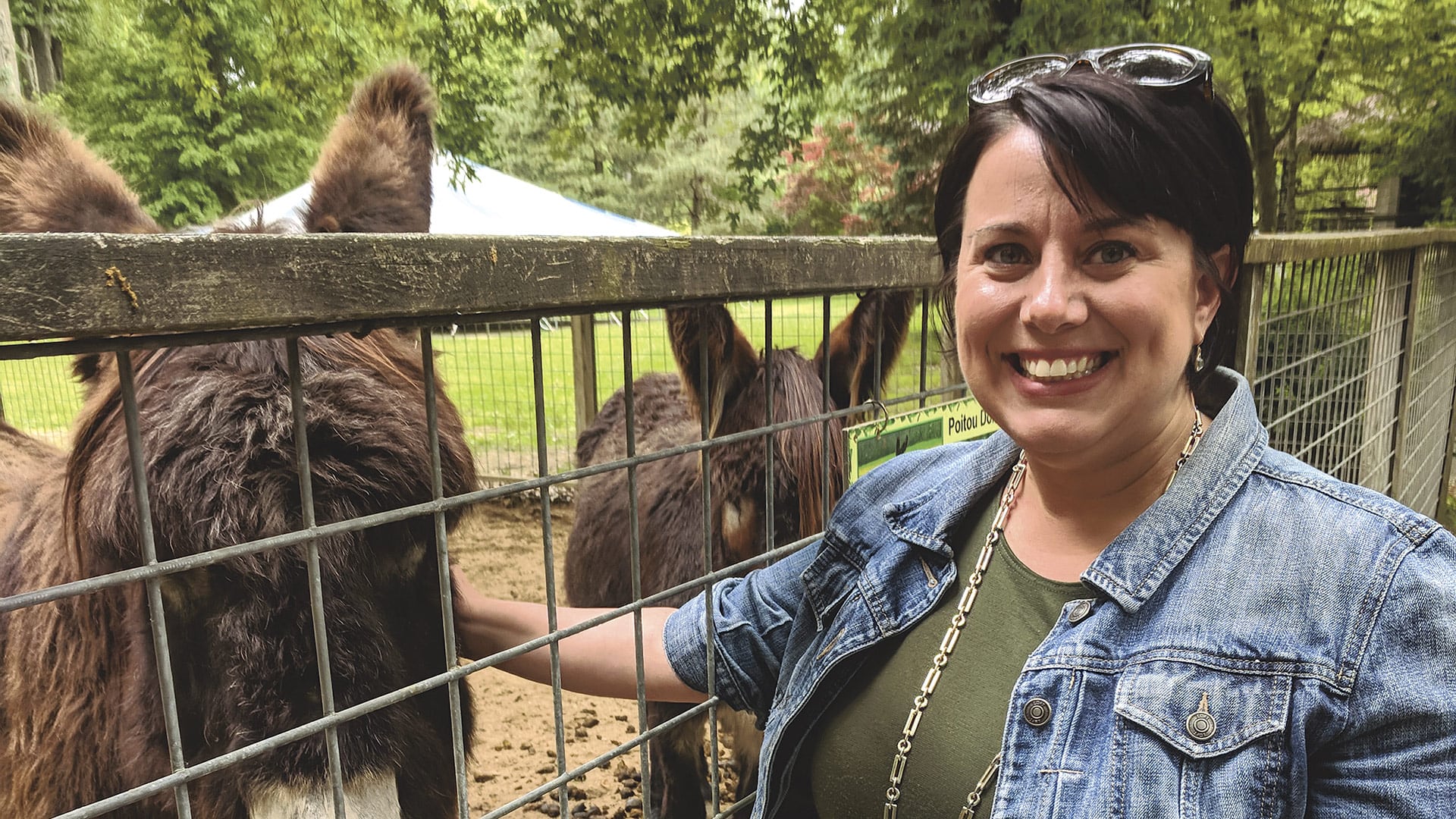 Executive Director Sarah Tsitso with a couple of poitou donkeys.

The Zoo in Forest Park & Education Center has seen its share of changes over the decades, and its current executive director, Sarah Tsitso, admits it’s still an underappreciated asset in Springfield. But an asset it is, she asserts, one that has honed its focus in recent years to emphasize education, conservation, and rehabilitation — and all the intriguing ways those ideas intersect.

Montana is a bobcat who used to be someone’s pet. That is, until, authorities found out and confiscated her; even out west, you can’t just go bring home a bobcat.

But since Montana had been declawed, the aging feline had no chance of survival in the wild, and needed a new home. The Zoo in Forest Park became that home.

“We’ve started working more collaboratively with other zoos, and particularly sanctuaries and rehab facilities, around the country for animal placements,” said Sarah Tsitso, who was named the zoo’s executive director last spring. “We want animals that make sense for our zoo in terms of our size, our geography, and our climate — especially animals that can’t be released into the wild, that are living in a sanctuary right now and are in need of a permanent home.”

With its 125th anniversary around the corner next year, the zoo has seen its share of evolution over the years, and that process is never-ending, Tsitso said. “We’ve been doing a lot of internal strategic thinking about the direction we want to take going forward, and one of the things we’re really focused on is moving away from that traditional zoo model and more toward education, conservation, and rehabilitation.”

The facility has been working recently with sanctuaries in Florida, Texas, Kansas, and Ohio to provide a home for animals in need of one. One example is a 1-year-old orphan coyote who was brought to a sanctuary with a broken leg. “She healed, but has never lived in the wild,” Tsitso said. “So she’s being flown in here.”

She’ll share the zoo’s four and a half acres with some 150 animal species, from timberwolf siblings Orion and Aurora to a pair of red-tailed hawks who rehabbed from injury but are not releasable in the wild, to a three-legged baby opossum who had the fourth limb amputated due to a serious injury, and is being moved from a sanctuary to its new home in Forest Park.

Then there’s a mink named Monte who escaped from a fur farm in Utah and found his way to a sanctuary, Tsitso said. “They were looking for a home for him because he’s never been in the wild; he was bred for his fur. We named him after the Count of Monte Cristo. Because of the jailbreak.”

In fact, the majority of the zoo’s animals are elderly, disabled in some way, or otherwise unable to survive in the wild, which makes the center’s focus on conservation and rehabilitation an important part of its robust educational outreach.

“Certainly, we want people to be aware that human interference has consequences,” Tsitso said. “Some of these animals have been hit by cars or are otherwise examples of nature meeting humans.” 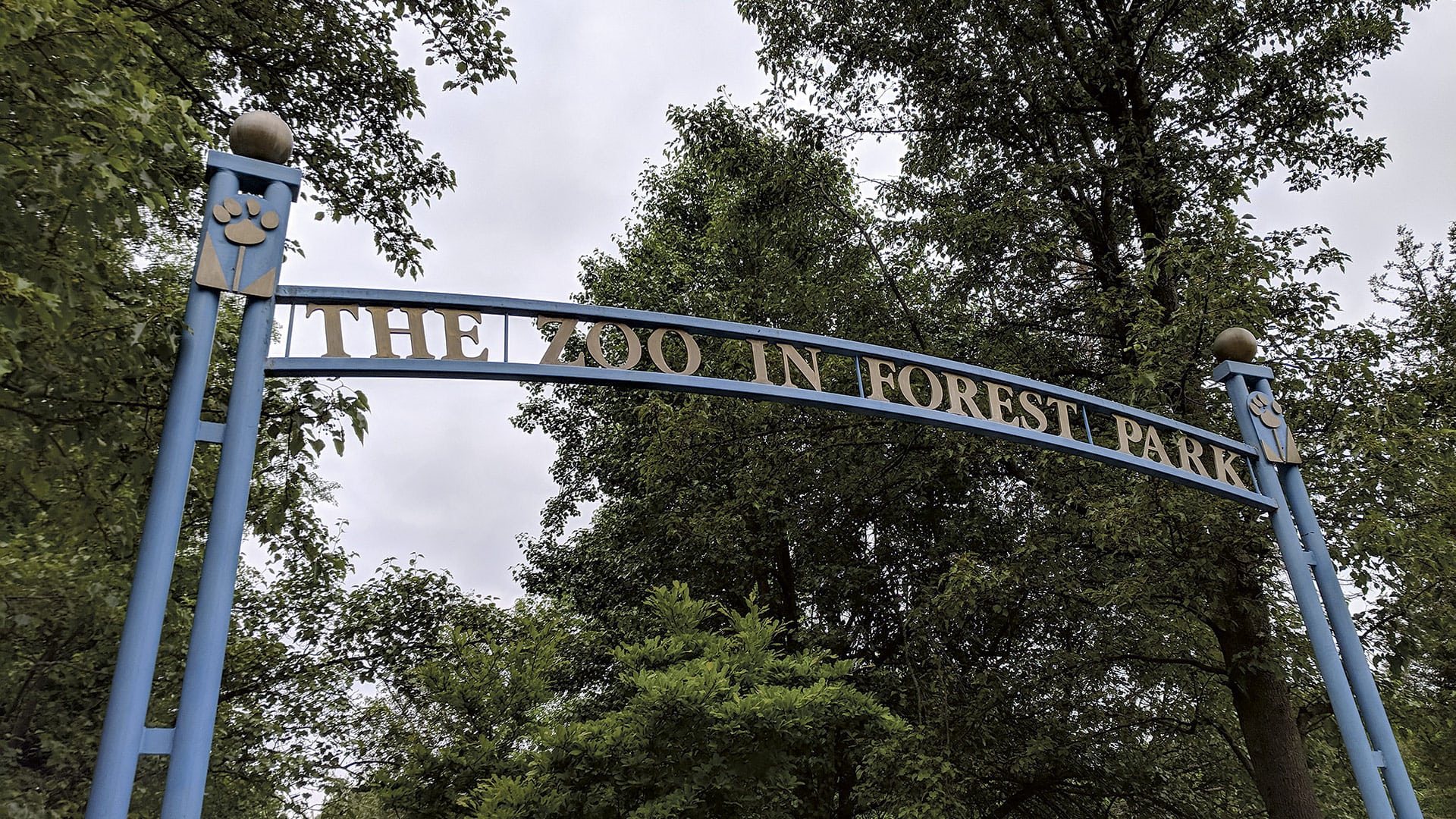 Although a part of Forest Park for well over a century, the zoo is still an underap-preciated city asset, its executive director says.

The zoo is currently working to bring in two bald eagles, a male and female, from a wildlife sanctuary in Alaska. Neither is releasable into the wild, as one had to have a wing tip amputated, and other one had a broken wing, so neither can fly.

“They’ll provide some interesting education to the public about bald eagles and why they are a symbol of our nation and how they were once endangered and now, through all these conservation efforts, their population has stabilized, which is wonderful,” Tsitso said.

She hopes to one day tell similar stories about other threatened or endangered animals in the Zoo at Forest Park, including its ring-tailed lemurs, arctic wolves, and poitou donkeys. “We’re continuing that movement of bringing in animals that need a home, that fit with our collection, and that are educationally interesting to people.”

In the meantime, this nonprofit veteran has found her own new home in a job she loves.

“I just felt like it was my opportunity to give something back to Springfield,” Tsitso said, “and do what I could do to make sure this asset stays around another 125 years and that people know it’s it’s here, and come and enjoy what we have to offer — and we have so much to offer.”

Tsitso told BusinessWest that Nathan Bazinet, the zoo’s interim director before she arrived, and Nunzio Bruno, then its board president, were looking for someone to come in and bring stability to this venerable nonprofit, despite the many challenges it faces.

“They wanted someone to connect it to the community and run it like a business,” she said, noting that conversations started a year before she came on board, but when she did, she fully embraced the opportunity.

“I really love the zoo,” she said. “It’s so ingrained in the fabric of Springfield and this neighborhood in particular. I really feel like I was meant to be here. I feel very fulfilled here — we have a great board, a great staff, and I love working with the animals.”

Until recently, Tsitso and her family lived in the Forest Park neighborhood — for more than 15 years, in fact.

“Our daughter was born in a house not a half-mile from here. And when she was little, we came here all the time. We’d walk from our house to here, she had birthday parties here, she loved this place. And I just really appreciated that it was here. Yet, so many people are unaware that we have this asset, this treasure, right here in the city.”

True to the zoo’s full name — the Zoo in Forest Park & Education Center — the facility focuses heavily on wildlife education, offering a variety of educational programs and special events for children and adults, from Zoo on the Go — which brings animals into schools, libraries, and senior centers — to guided tours and discovery programs for all ages, as well as Zoo Camp during winter and summer school vacations.

The zoo also offers a vibrant internship program, she said, providing students at area colleges studying animal science or veterinary care an opportunity to learn outside the classroom.

Broadening those programs is a priority, Tsitso said, for reasons that extend beyond the value of education, which is significant.

“Our biggest revenue stream is admission, and we’re only open five months of the year, and for two of those five months, it’s weekends,” she said. “So it’s very challenging to meet our budget. But we’re working on some new avenues of revenue. We’re expanding our education programs. Our Zoo on the Go and education programs run year-round, so we can really bolster those and create some new partnerships in the community whereby we can be offering those programs more consistently.”

The zoo used to receive state funding, but that ended about five years ago, although Tsitso and her team are trying to re-establish that revenue source. Meanwhile, community partnerships remain crucial, like Paul Picknelly’s recent donation of first-week proceeds at the new Starbucks at Monarch Place to fund an exhibit of African cats at the zoo.

“Those kinds of community partnerships are really what’s going to keep us growing,” she added, “and we’re really hoping that the community, as they realize all the wonderful things happening here, keep coming back.” 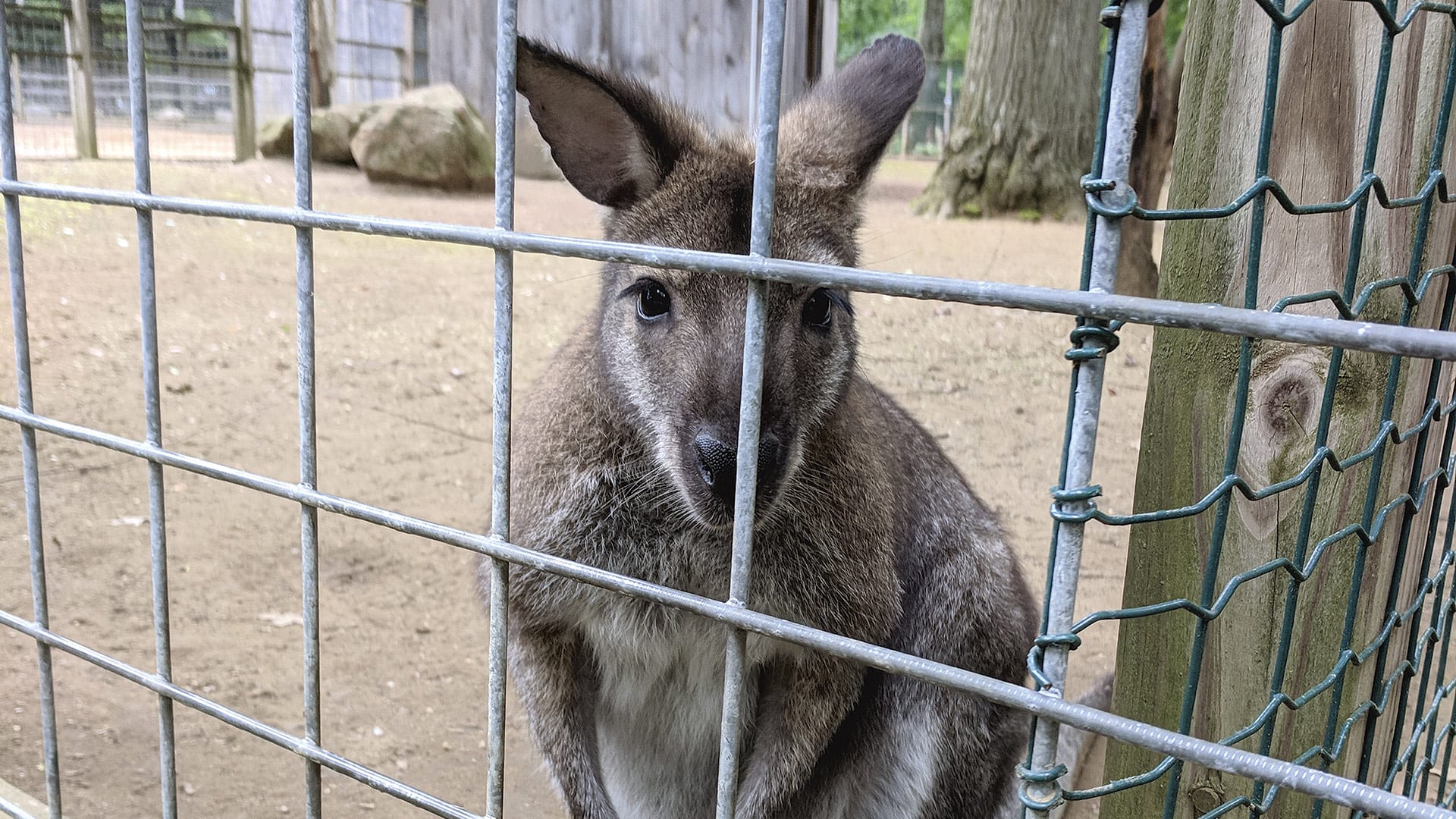 This wallaby is one of some 150 species of animals living at the Zoo in Forest Park.

Operating a zoo at affordable admission prices — in addition to day passes, many families take advantage of $85 memberships, which are good all season for up to six family members — is a challenge, Tsitso said, especially since the zoo is not affiliated with the city and gets no revenue from other Forest Park-based events. It does benefit from a series of 25-year leases from the city at $1 per year — the current lease expires in 2035 — as well as the fact that Springfield foots its electric bill.

“We’re very grateful to the city because for a long time they have been great partners for us, but there is a differentiation between us and the city,” she said. “We’re not overseen by the city; we have our own board of directors.”

Those directors chose Tsitso — who has claimed leadership roles with nonprofit groups including Greater Springfield Habitat for Humanity, the East of the River 5 Town Chamber of Commerce, two Springfield-based Boys & Girls Clubs, and the Food Bank of Western Massachusetts — to guide the zoo through its next era of growth, but it has to be controlled growth, she said, based on its limited footprint.

That’s why she and her team are working with the animal-care staff to create a sort of wish list of what animal exhibits the zoo lacks, what it should bring in, and how it might acquire those animals.

“We’ve been pretty fortunate in working with people all around the country who are willing to help us and are looking for great placements for these animals,” she went on. “Most of them are so excited their animals are coming here.”

In many ways, the Zoo in Forest Park is not the same attraction families experienced decades ago, Tsitso noted.

The animals that do call Forest Park home have plenty to offer visitors, including the rush of school groups that take field trips there, averaging some two to three groups a day during the spring.

“That’s a big piece — we want to get kids in here, and we want to get them excited about nature and exposed to lots of different types of animals,” Tsitso said. “For a lot of kids, especially inner-city kids, they’ve never seen a lot of these animals. Even a goat is something that’s new and interesting to them. So it’s really fun to watch the kids come in and not just see the animals, but get to interact with some of them and get an education about them. How do they eat? How do they sleep?”

When the zoo shuts its doors to visitors for the cold months, typically around Halloween, the ones who don’t like the cold move into indoor facilities — like Oz, a spotted leopard Tsitso pointed out on a recent stroll with BusinessWest through the grounds. Oz has a large outdoor enclosure, but also a small ‘house’ that’s heated during the cold months.

It’s home to him, just as the Springfield area has long been home to Tsitso, who has found her new calling leading the zoo’s small staff — two full-time animal-care professionals, about four part-timers, and a raft of volunteers and interns — into whatever its next phase may bring.

“Springfield is very important to me. It really is the economic center of our whole area, and when Springfield succeeds, we all succeed,” she said, adding, however, that the zoo is a city asset that feels, well, apart from the city.

“One thing I love about this zoo, being inside Forest Park, is that it feels very natural in here, very close to nature, with lots of green and lots of trees. It doesn’t feel like Springfield. It really is a little sanctuary.”

Not just for her, but for those who visit the zoo — and the growing collection of animals that call it home.