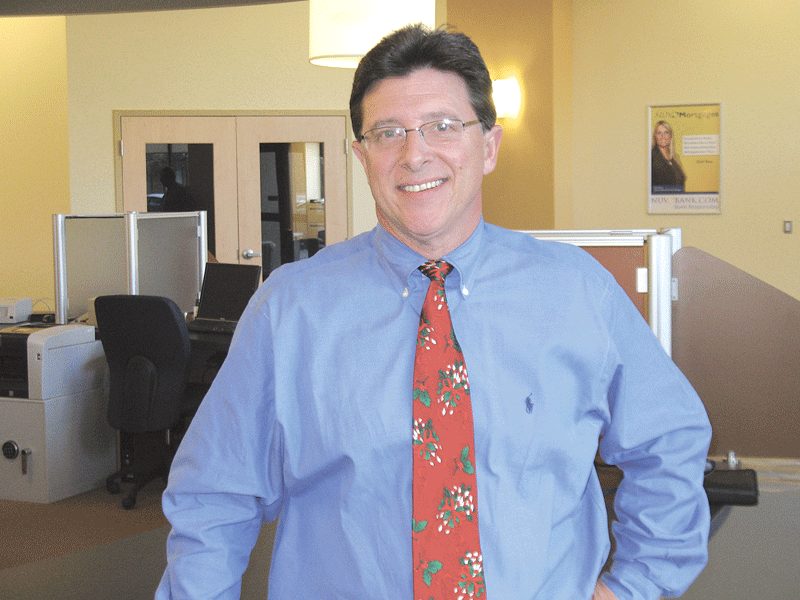 Jim Kelly has long touted the benefits of banking with a local institution.
“It’s important to do business with people you trust,” said Kelly, president of Polish National Credit Union. “When you run into a difficult situation, you can come into our credit union and talk to someone face to face. I think that’s important. It’s all about helping people.”
These days, that’s a message that resonates more than ever, as large, national banks have begun to see a trickle — perhaps a stream — of customers closing their accounts and moving them to smaller institutions.
“All our business is coming from other banks,” said Trent Taylor, chief operation officer and chief credit officer of NUVO Bank, which opened its doors for business just three years ago. “Everyone who comes in here has come from another bank. And the tellers out front are constantly seeing people come in because they’re tired of the fees, and they’re aggravated by their old bank.”
That aggravation is widespread. According to a Zogby survey earlier this year, almost 15% of respondents moved from a national bank to a community bank or credit union in the previous year alone. Reasons — and many people named more than one — ranged from lower service charges (36%) to better rate of return (32%) to convenience (20%). A full 60% added that they wanted to make a statement of protest against one or more policies of the large bank.
Some people feel that way but are hesitant to change, Taylor continued, but many feel the hassle of switching is worth it. “We can offer all the frills of the other banks, but none of the charges.” 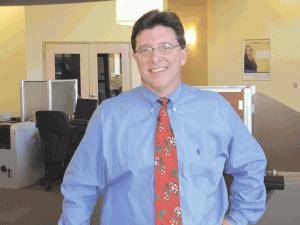 Jeff Sattler says the largest institutions don’t care whether they lose a $1,000 checking account, but community banks value those customers.

Jeffrey Sattler, NUVO’s president, argued that the largest banks not only don’t fret over losing customers in exchange for raking in more fees from those who stay, but actually want to shed some of those depositors.
“Every time a bank is acquired, change is inevitable, and as they get bigger, Western Mass. becomes a smaller percentage of the size of the bank,” he told BusinessWest. “The big banks are not the bad guys, but this is just not the market they’re interested in anymore. A $100 billion bank doesn’t have the same appetite for a $1,000 checking account; it’s just simple math. And they’re going to charge the fees and say ‘take it or leave it.’
“Bank of America is a trillion-dollar bank,” he continued. “They want that business to leave. But that’s our bread and butter. Our roots are here; we have no one else to answer to.” 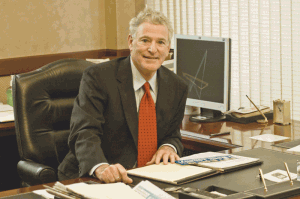 John Heaps, president of Florence Bank, said he has seen movement from larger banks to smaller, local banks in three areas: mortgages, commercial loans, and retail banking.
“On the mortgage side, it’s clear that consumers and Realtors both like going to local banks because they can look people in the eye and know they’re getting the right product for their financial situation,” he said. “And they know that we, as well as other local banks, also service the loans. That’s huge; we don’t sell the servicing. If you have a question about your mortgage, you can come in and talk to us, and we’ll do what we need to do.”
That local presence is important to both borrowers and their agents, he continued. “If they have a need to modify the loan, like going interest-only, we can make a decision right here in this area. If they have an issue and need to talk to somebody, we’re right here. Realtors are also concerned with getting a relatively short turnaround time for a purchase.”
On the small-business side, Heaps continued, “you just can’t find people in this market area from the larger banks who are looking to make small-business loans. They don’t have the resources; all the people have been transferred to Hartford or Boston, and as a result, the local community banks have really picked up the pace.”
Heaps said he has heard chatter about whether banks are prepared to lend, but that it hasn’t been an issue for institutions based in Western Mass.
“Every single community banker I’ve talked to in this marketplace is willing to lend,” he noted, adding that most of the reluctance to pursue loans is on the borrowers’ side, partly due to uncertainty over the status of the extension of Bush-era tax cuts.
“There’s a reluctance among business people to invest, particularly until they know what the tax situation is,” Heaps said. “A significant number of borrowers have come to us with great ideas, but said, ‘as a small-business person, I don’t know what’s going to happen with my taxes.’ Keeping the tax rates in place for at least next year will have a more significant impact than people realize.”
Finally, on the retail side, Heaps said, many depositors in large banks have become weary of constant changes to the fee schedule designed to hit them with charges for everything from debit transactions to fraud alerts.
In fact, constantly changing fee schedules (rarely in customers’ favor) have chased many depositors away from national banks and toward community banks with much more stable charges (see story, page 28).
“That’s what we’re all about,” Polish National’s Kelly said. “We have some of the lowest fees in the area. We don’t need the money; we make a lot of bottom-line income, so we don’t have to charge a lot of fees. A lot of these large banks brag about how many households they have, but to customers, I don’t think ‘too big to fail’ is seen as a positive thing anymore.”
He said the public recognizes the role of megabanks — specifically questionable lending practices — that contributed mightily to the economic collapse of 2008, and the fact that this region’s community banks and credit unions never operated like that should be a selling point.
“Some of these large banks are going to try to regain their respectability in the industry, and we don’t have to do that,” Kelly explained. “We’ve always done the right thing. If you’re applying for a mortgage, you want to know more than whether you’re getting the best rate and not paying a lot of fees; you also want to be with a financial institution you can trust. These things didn’t come into play a few years ago; then, you were shopping for a rate, and that’s it.”
It’s no surprise, he said, that customers increasingly want to bank at institutions that embrace responsible practices no matter what the economic conditions.
“We’re not going to be able to predict the next recession, but we will have one at some point,” Kelly continued. “At the start of the Great Recession, when the market melted down, we not only maintained strong capital, but remained profitable, and didn’t see any impact on asset quality.”

Should I Stay or Should I Go?
With seemingly so many reasons to leave megabanks, Megan McArdle, business and economics editor at the Atlantic, recently explored the question of why some people choose not to leave. And she started with herself.
“I bank in two places: Navy Federal Credit Union and Citibank,” writes the Washington, D.C. resident. “NFCU is better in all ways except one: they don’t have a branch in D.C. That means that every time I want to make a deposit, I have to drive out to Virginia. So I tend to go there once every few months and put a bunch of cash in the bank for our regular or big expenses: car loan, wedding stuff, rent and utilities. But it is not a convenient place to do my everyday banking.”
She admitted that she stays with Citibank because it has a presence all over the country, and she’s moved her residence often over the past decade — not to mention business travel.
“America does have high rates of labor mobility, and a lot of people travel for work,” she concludes. “That’s going to favor national banks, which, in turn, lets them offer less-favorable terms to their customers. I’m paying for convenience. But frankly, it’s worth it.”
Still, an increasing number of customers insist that it’s not, and that they’d rather bank at the institutions that didn’t contribute to the financial meltdown, yet will have to pay in some ways for the mistakes of the megabanks. Heaps noted that, while about 30 new rules emerged from federal regulators in the wake of the Enron scandal, the Dodd-Frank financial-reform bill passed earlier this year includes about 300.
“That’s what we’ve been living with; we’ve paid the price,” he said. “But now we’re starting to see consumer confidence picking up.” And that means more opportunities for big-bank customers who are starting to reconsider the value of the local touch. 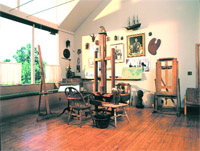