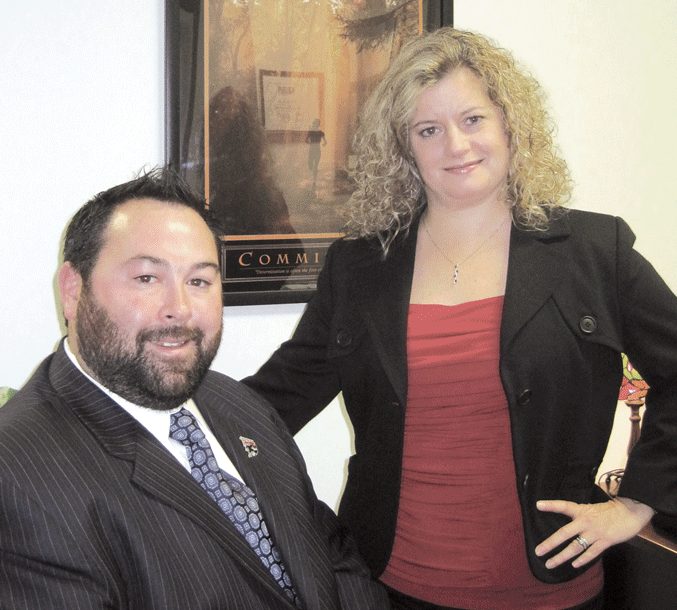 Group Wants to Emphasize That It Goes Well Beyond Networking 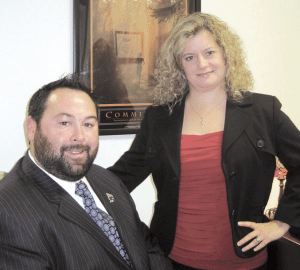 Chris Thomson and Pam Thornton say the primary challenge for YPS is to effectively communicate that it is much more than a networking organization.

Chris Thompson isn’t a young accountant — his business card declares that he is vice president of Business Development for the Springfield Falcons hockey club — but he put himself in the shoes of such an individual to help explain what the Young Professional Society of Greater Springfield (YPS) has accomplished in its first five years, and where the group intends to go in the future.

“Can you imagine being a 22-year-old accounting graduate from UMass who has a chance to meet with Mark O’Connell?” asked Thompson rhetorically, referring to the recently named president and CEO of Wolf & Co., P.C., who was the featured business executive at a recent YPS CEO Luncheon. “You can’t put a price tag on having a face-to-face with a decision maker like that. ”

Indeed, in addition to valuable insight about the accounting industry and business in general, O’Connell provided his luncheon guests with indisputable evidence that one doesn’t haven’t to leave Western Mass. to script a success story. O’Connell, a long-time partner with the firm, has long worked out of the Springfield office rather than the firm’s headquarters facility in Boston, and he made a conscious decision to keep that business mailing address when he was chosen this past summer to lead the company.

Those career decisions enable YPS’s marketing slogan — ‘Live, Work, Play, and Stay’ — to resonate, said Thompson, a long-time YPS member, adding that exposing the group’s membership to more of these stories is one of many formal and informal goals moving forward for the organization, which recently turned five, and marked that milestone by completing a new, three-year strategic plan.

That document, which calls for hiring a full-time executive director, among other steps, addresses goals and aspirations, but also perceptions about the group and apparent misperceptions as well, said Pam Thornton, business-development director for United Personnel and current president of the organization.

Elaborating, she said YPS is perceived by many as simply a networking group, a view facilitated by the group’s popular and highly visible Third Thursday gatherings.

Those get-togethers will continue, she went on, adding that networking remains a high priority for the organization. But there are other missions, ranging from educating members about issues and the region in general to helping members get involved in the community, to, overall, providing motivation for young people to stay in this area.

“YPS is all about graduating youth into the business world, and I see it as a foundation, a funnel, a vehicle for all of the things this area is concerned about in retaining talent,” said Thornton, adding that the new strategic plan emphasizes this mindset.

Summing up the plan and what its architects hope it will accomplish, Thompson said it was crafted with the broad goal of greatly reducing the volume of questions relative to why the organization exists, what it does, and how it carries out its mission.

“There was no blueprint back then,” he explained, referring to the group’s early days, while noting that, with a firm plan in place, YPS can better articulate its charge — and carry it out.

For this issue, BusinessWest talked with several YPS members about the state of their organization at this important stage of its development, and where it can, and should, go from here.

If success can be measured in numbers, such as those related to membership, then YPS can certainly claim a number of victories since its formation in the summer of 2007.

It now boasts more than 500 individual members and 50 corporate members. Meanwhile, its e-mail list has grown to more than 2,000. And there have been other forms of validation: BusinessWest chose the group as one of the first recipients of its Difference Makers award in 2009, and state Sen. James Welch (D-West Springfield) is sponsoring legislation to develop a ‘Young Professional Commission,’ which would give the 11 YP organizations across the Commonwealth a voice on Beacon Hill.

“What makes YPS important is that many of the decision makers, not only in our region, but everywhere, tend to be further along in their careers,” said Welch. “YPS represents those that are a little earlier in their careers and gives them a bit more of a voice when it comes to decision making and influencing policy and the direction the region wants to go in.”

The commission would also be a key element in ongoing efforts across the Commonwealth to keep young professionals — what Welch and others call “intellectual capital” — in the Bay State, thus making it a more attractive state in which to do business.

Yet, despite these triumphs, there is still an apparent lack of awareness, even among some YPS members, about the group’s official mission and the work it does within the community and for its members.

These were revealed at a series of focus groups staged last summer and facilitated by Ronn Johnson, president of R.D. Johnson Consulting.

Among the findings was that nagging perception of the group as simply a networking organization, a view that is somewhat troubling, but perhaps understandable. That’s because, from the start, YPS has stressed the importance of networking and building relationships, both from a business perspective and a community-involvement standpoint.

“That’s where the disconnect has been; we were a young, social business group that built strong foundations through networking,” said Thornton. “When you look at the chamber, that’s what they do, too … it’s called building relationships; you aren’t going to do business with someone you don’t like.”

The group’s networking activities, especially its Third Thursdays, will continue, said those we spoke with, because they remain one of the few — and most effective — vehicles for young people to build those relationships. But YPS will emphasize other aspects of its charge, and more forcefully articulate them.

The need to do so was made clear at the focus groups, said Kishore Parmar, vice president of the Pioneer Valley Hotel Group, who was asked to be an observer and administrator at two of the sessions, which solicited feedback from area business and nonprofit leaders.

He noted that many of these participants were aware of YPS, but opined that its mission was not clearly stated.

“That’s the biggest issue with them,” he told BusinessWest. “They wanted to know what our end goal was, to see it written down, and to see it formally introduced.”

To do all this, and create that more solid blueprint that Thompson described, the group’s strategic plan sets a number of goals and methods for realizing them.

One of the key provisions is hiring an executive director, a step necessitated by the group’s profound growth, and a measure that will give YPS a face and a voice in the community and an important layer of management.

“There are many nonprofits out there that function quite well without an executive director, but they really only get legs when they have someone who can manage the organization on a full-time basis,” Thornton told BusinessWest. “So we will be approaching key stakeholders in the community to invest in YPS.”

The strategic plan also calls for a sustainable organizational structure that will explore more funding opportunities through grant and fee-based programs; a task force to oversee a fund-development plan; the possibility of a conversion from a 501(c)(6) to a 501(c)(3), allowing a charitable arm of YPS; and strengthening community, key-stakeholder, and political partnerships.

Other facets of the plan include additional focus on fostering “an inclusive, culturally competent, and community-relevant organization in the eyes of its members and the broader community.” Thornton said YPS is already taking a number of steps in the realm of diversity, “but we can always do better.”

She noted that the 16 members of the board of directors will be attending a diversity-education seminar in January, bringing what they learn back to members.

Another component of the strategic initiative focuses on what the group calls work/life development opportunities.

“When we look to the future, we want people to view us as what they asked us to be,” Thornton explained. “The feedback that we got was about professional-development programming, education reform, real-estate concerns, casinos and a forum about that issue — and they really want to be connected in the community through volunteerism, but they want someone to show them how to do that.”

Part of this assignment will involve simply making young people aware of the many kinds of professional-development opportunities that exist in this region, said Thompson, noting that several colleges and workforce-development agencies provide workshops and other programs, many of them free of charge, but young professionals often don’t know about them.

Welch agrees. “Young professionals know from experience that, when they were first starting out in their careers, they didn’t necessarily know what resources were out there and available to them.”

And while many in the business community are focused on what YPS can do for them and their employees, Thornton believes these same people have to ask what they can do to help YPS.

“Maybe employers need to take a step back and see how they can become involved; young people need the elder community to be mentors, and those employers have a role in YPS,” she explained. “And the only way to do that is to engage young people, mentor them, give credence and value to the things that they’re interested in … and that’s how to keep young professionals in the area.”

Still another stated goal within the strategic plan is to create vehicles through which the board can more effectively communicate with current and potential members, partners, and the general public through the YPS website and other marketing strategies. Such efforts are expected to help increase membership, facilitate recruitment of sponsors, and solidify efforts to retain young talent across the region.

“When the question is asked, ‘what does YPS do?’ we’ll be able to answer that though our website, e-mails, and a consistent brand,” said Thornton. “These are big goals, and we’ll need time to realize them.”

Summing up what he saw and heard at the last summer’s focus groups, Parmar said there is a perception among many that YPS is “finding its way” and evolving into a viable organization that is promoting intelligent discussions and generating tangible results.

“There are more doers, and they’re rising up,” he said, adding that, moving forward, the group’s basic challenge is to encourage more area business leaders to voice such opinions, and eventually prompt use of the word ‘found’ rather than ‘finding.’

Generating such dialogue — and changes in perception — will take some time, but with a new strategic plan in place, those within the organization believe YPS has a blueprint in place for building on what has already become a success story.

Back in the Q