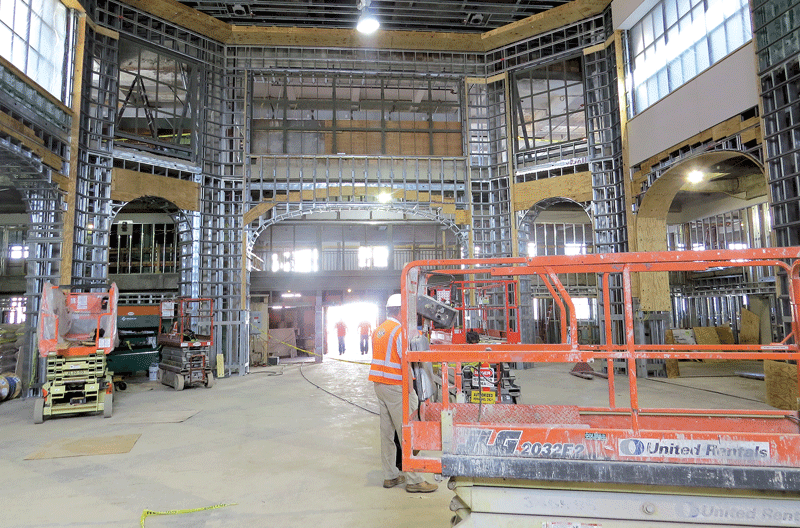 As he talked about the massive, $88.5 million Union Station redevelopment project, Richard Fairbanks made early and frequent references to its many stages, the critical sequencing of its various components, and the formidable challenge of handling this work while partnering with — and dealing with — a veritable alphabet soup of agencies and stakeholders.

They range from CSX, the transportation giant that runs trains through the facility, to the SRA (Springfield Redevelopment Authority), which owns the property, to MassDOT (Mass. Department of Transportation), which is essentially calling most of the shots.

“With most projects, you have a few agencies to deal with, but mostly it’s the customer, and things are much simpler,” said Fairbanks, project manager with Holyoke-based Daniel O’Connell’s Sons, which is handling the project, citing, as one example, the expansion of the Sr. Mary Caritas Cancer Center, which O’Connell built for the Sisters of Providence Health System. “Here, it gets really, really complicated with all those entities.”

‘Complicated’ is probably the best adjective to describe this project, which has been, in some respects, three or even four decades in the making — that’s how long the 90-year-old station, built by the Boston & Albany Railroad, has been mostly vacant — but is now approaching the proverbial end of the line.

Well, in most respects, as we’ll see.

Indeed, the 377-space parking garage has taken shape with interior infrastructure work still to complete; the bus-berth area (there will be 27 bays for inter-city and intra-city buses) is nearing completion; and the long-anticipated work to return the interior of the station, and especially the so-called Grand Hall, to its former glory is entering its final stages, with framing completed and work on the finishes set to start. 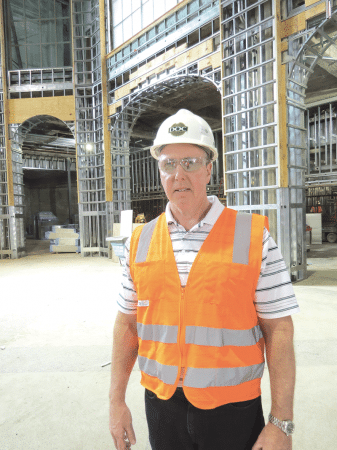 Richard Fairbanks says the Union Station project is complicated by its many stages and myriad stakeholders.

Meanwhile, work on the large commercial spaces above and around the Grand Hall is continuing, said Kevin Kennedy, Springfield’s chief development officer and long-time driver of the project, adding that these areas are approaching the ‘white-box’ stage, from which it can build out to suit tenants’ needs and desires.

“Everything is pretty much on track,” he said, borrowing terminology from the industry to describe the pace of progress. “Things are taking shape on schedule.”

But some of the work will not be done on schedule, due in large part to two more of those seemingly endless acronyms — in this case the ADA (Americans with Disabilities Act) and the FRA (Federal Railroad Administration).

The former requires six feet of space on either side of the so-called headhouse on a rail platform (the structure at the top of the stairway to the platform and the elevator), and the latter recently refused to grant a waiver for the renovated Union Station and its planned five and a half feet of space.

So it’s back to the drawing board in the real sense of that phrase, Kennedy said, adding that new designs, funded by MassDOT, will be drafted, and the platform should be completed about a year from now.

But the station itself and the complex’s many components, from the parking garage to the bus berths, will be completed on schedule by the end of this year, with the landmark due to celebrate what should be a grand opening — or reopening, to be more precise — next January.

Fairbanks, who succeeded Bob Aquadro as project manager earlier this year, has been with O’Connell for nearly 30 years, and has a number of large projects on his résumé, including the new courthouse in Taunton and work at Yale University, including a renovation of a music facility that is in many ways similar to the Union Station endeavor, right down to the terrazzo floor.

Most of his recent work has been in the 413 area code, including the cancer center expansion and an addition to the women’s correctional facility in Chicopee.

While he’s only been project manager on Frank B. Murray Way for several months, he knows the full history of the project, and said this initiative, which started more than four years ago, has been more complex than most because of its many stages, intertwined players at the local, state, and federal levels, and the unforeseen problems that come with working on a building opened a year before Charles Lindberg flew across the Atlantic.

“You try to capture everything on the drawings before the project is bid,” he explained, “but when you get on the job, you find things that weren’t on the drawings, and that leads to change orders.”

An architect’s rendering of the renovated Union Station.

The primary challenge, though, is coordinating all the various steps in this project so that the work can proceed smoothly and without interruption, efforts that were helped by a mild, relatively snowless winter that enabled the parking garage to go up seemingly overnight.

“This is essentially five projects in one — there are a lot of steps,” he said, listing the terminal, platform, parking garage, bus berths, and the extremely complicated process of waterproofing the terminal and tunnel that connects it to the platforms.

“This is a difficult process because it all has to be sequenced,” he said of the waterproofing work, which began months ago and is ongoing. “The trains can never stop, so you can’t take all the tracks out at once.”

But there is light at the end of that tunnel — figuratively, but also literally — and light in the tunnel as well.

Indeed, as he walked and talked with BusinessWest while giving a tour of the construction site, Fairbanks pointed to the terrazzo floor in the terminal — perhaps the most celebrated original surviving element of the station (most of the original wooden benches that were due to be part of the restoration were reported stolen under mysterious circumstances).

“This will be the last stage,” he said, noting that a firm that specializes in the restoration of such floors will start its work when virtually everything else is done.

And it will be a fitting finishing touch, he said, noting that it will represent the capstone (at least when it comes to the terminal) of a project that has been historic in every sense of that word.

A Big Move to the ‘Small House’