A Matter of Resiliency 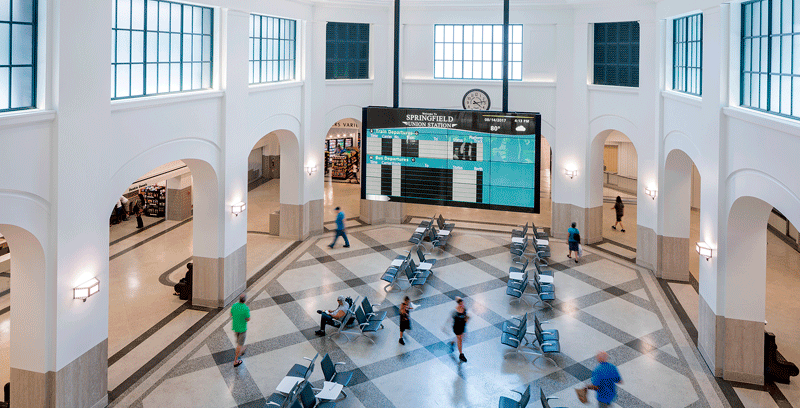 The Grand Concourse at Union Station before (top) and after.

Springfield’s Union Station — and the project to bring it back to productive life after more than 40 years of dormancy — have both been described using a whole host of words and phrases.

But ‘a bureaucrat’s delight?’

That was a new one, and one that most people probably wouldn’t expect to see the light of day. But Kevin Kennedy, Springfield’s chief Development officer, summoned it as he talked about the latest additions to what is becoming known as the Union Station trophy case — only there is no such thing. Yet.

These would be two awards from the Environmental Protection Agency (EPA)— one for the best environmental rehabilitation project in New England region, and the second, announced after all the regional awards, is the so-called Phoenix Award, for the best brownfield redevelopment project in the country.

This was the first such honor for the Western Mass. region, and to earn it, the Springfield project prevailed over a wide range of impressive initiatives, from transformation of 14 acres of former rail yards, junk yards, and auto-repair shops into a recreational center in New Jersey, to a stunning metamorphosis for the so-called ‘Big Marsh’ in Chicago.

The award — and the efforts that made it possible — are significant on many levels, said Kennedy, because this was the work that went on behind the scenes, in every sense of that phrase. And this is what he meant by ‘bureaucrat’s delight.’

“From a professional basis, this is what we do in the background to make these projects happen,” he explained. “Everyone focuses on the public side of things, the up-front things that you see. But when you develop a project, you have to be able to work within the bureaucracy to satisfy all the regulatory issues and help with some of the funding.”

Indeed, while much of the focus on the station project has been on high-profile, highly visible initiatives, such as the façade, the parking garage, the new bus terminal, and the stunning transformation of the main concourse, all that wouldn’t have been possible without the environmental remediation work that came before it.

This environmental cleanup involved the former baggage-building property adjacent to the terminal, which was demolished, and the former site of the Hotel Charles, said Kennedy, noting that the property had petroleum, metals, and asbestos contamination. Meanwhile, the project — creation of a new and expanded intermodal transportation facility — also addressed air quality and congestion mitigation.

The Springfield Redevelopment Authority, owners of the building and managers of the redevelopment project, and lead contractor Daniel O’Connell’s Sons worked with a number of vendors to handle the remediation. The Westfield-based environmental engineering firm Tighe & Bond handled the analysis, specifications, and oversight of the work, while T&M Equipment Corp. in Springfield, LVI Environmental Services in Everett, American Environmental in Holyoke, and NCM Contracting Group in Weston handled various aspects of the cleanup and demolition work.

But when Kennedy says the $95 million could not have come to its successful conclusion without that remediation, he really means it, and on many levels, from not only a construction standpoint, but also what would have to be called a momentum standpoint.

Indeed, there were several times over the past few decades when the Union Station project was stalled, even dead in the water. But it was progress with the environmental issues that kept the project relevant and put it, well, back on track.

“Back around the turn of this century, there was a start to this project, and then it stopped,” Kennedy recalled. “We had to figure out in 2007 and 2008 how to restart the project, and there were two very important funding sources that enabled us to get things restarted.”

The first was a $350,000 planning grant awarded by then-Gov. Deval Patrick that enabled the city to hire an architect to start the process of organizing the project, and the second was a roughly $250,000 EPA assessment grant to be used to identify to scope of the environmental issues at the site, including the baggage building and Hotel Charles footprint. 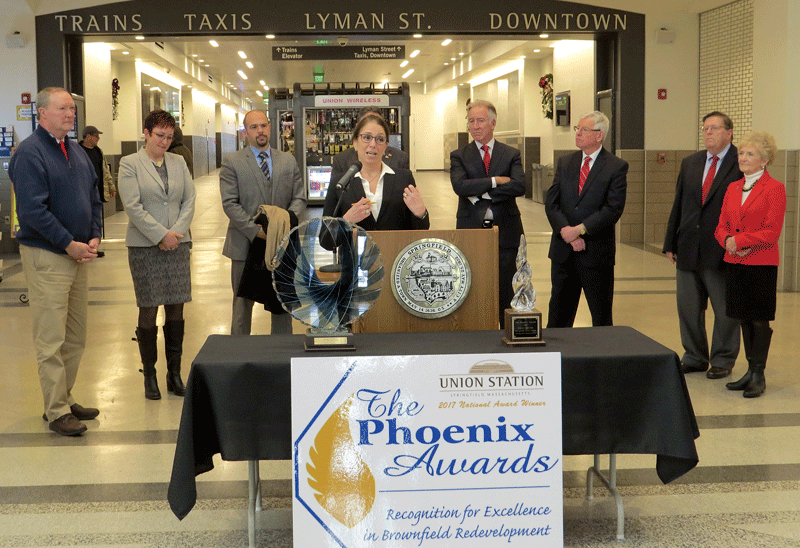 Lauren Liss, president and CEO of MassDevelopment, addresses those assembled at a press conference on Dec. 11 to announce that the Union Station project had won the Phoenix Award.

“Those were the two items that kick-started the project again,” Kennedy told BusinessWest. “They allowed us to scope out how to do this, and without them, I don’t know how we would have been able to start.”

In essence, the initial environmental work enabled planners to “get our arms around the project,” as Kennedy put it, enabling them to go back to the major funders, including the Federal Transit Authority and the Mass. Department of Transportation with a far sharper picture of what needed to be done at the site and what could be done with it.

“There were so many of those boring things that those of us in the inside of the government had to put together,” he went on, adding that these boring, behind-the-scenes efforts, spearheaded by SRA director Chris Moskal and consultant Maureen Hayes, eventually made those stunning ‘after’ shots in the before-and-after scenarios possible.

The environmental-cleanup efforts, and the project as a whole, were effectively summed up in the application for the brownfield awards, where Springfield officials listed the key project lessons as ‘resiliency.’  “A long-vacant train-station redevelopment project that had many starts and stops was restored to a state-of-the-art intermodal transit center thanks to the resiliency of its people and leaders,” the application reads.

As for that reference to a trophy case, there really is one, as noted. But the Union Station project has collected a number of awards, including the two EPA prizes, the Paul and Niki Tsongas Awards from Preservation Massachusetts in the category called ‘Best Now and Then,’ the Springfield Preservation Trust’s 2017 Project Rehabilitation Award, and the Honow Award from the Assoc. of General Contractors of Massachusetts.

Collectively, they speak to the enormity of the project and the significance of resurrecting a huge piece of Springfield’s past and making it a significant part of its future.

As for it being a ‘bureaucrat’s delight,’ only the bureaucrats can truly say.