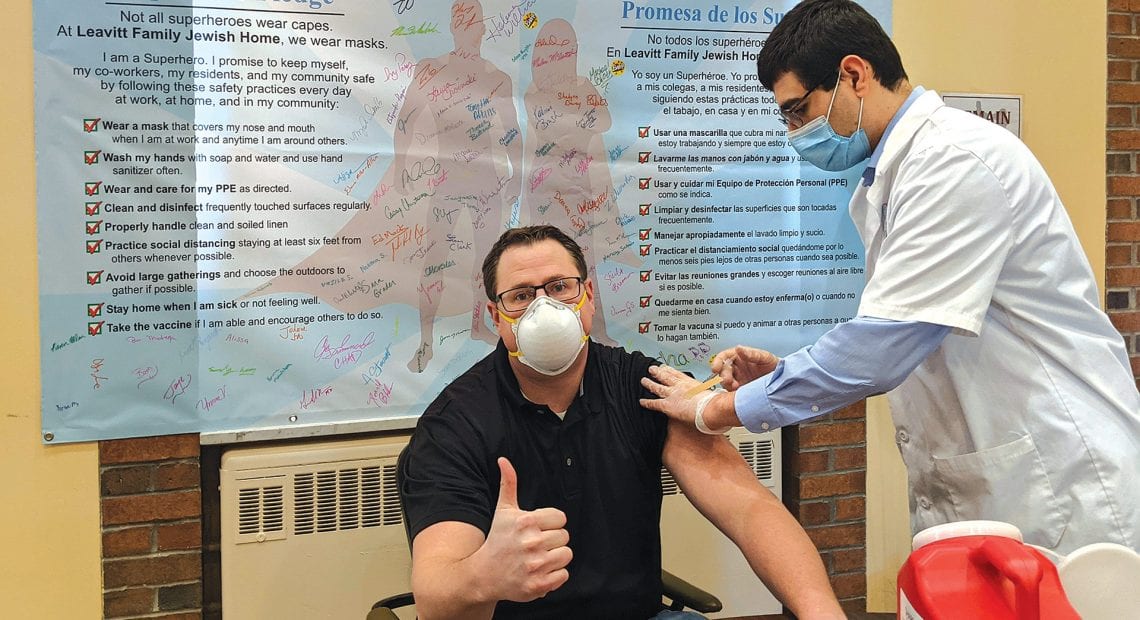 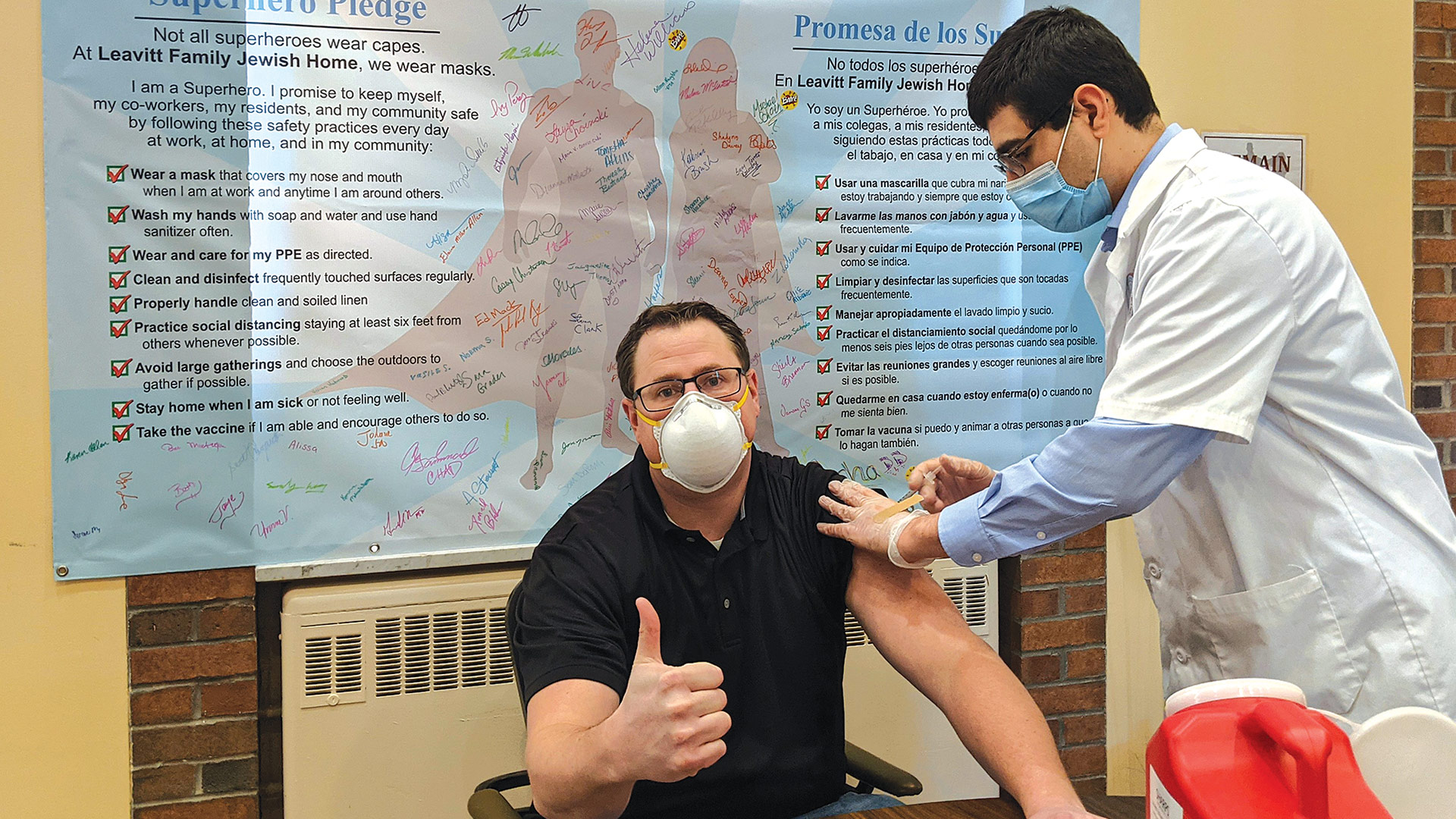 Rob Whitten, executive director of the Leavitt Family Jewish Home, gets vaccinated in January. For the public, the process has been thornier.

February was the month all seniors in Massachusetts would finally be able to get the COVID-19 vaccine.

Instead, it was a month of frustration.

“It’s simply inexcusable, in a state with the healthcare infrastructure and high-tech reputation we have, that the vaccine rollout was allowed to fall behind every other state so quickly,” state Sen. Eric Lesser told BusinessWest, calling the state’s scheduling website “an obstacle course with all these links and hoops to go through, instead of making it simple, like Travelocity or KAYAK or Open Table.”

That’s when it wasn’t crashing altogether, like it did two weeks ago, when the state opened up vaccine appointments to all individuals 65 and over, as well as individuals age 16 and older with two or more co-morbidities, from a list that includes asthma, cancer, obesity, diabetes, and a host of other conditions.

Later in phase 2, access will roll out to workers in the fields of education, transit, grocery stores, utilities, agriculture, public works, and public health, as well as individuals with one co-morbidity. Phase 3, expected to begin in April, will include everyone else.

Lesser hopes the process — not just to schedule a vaccination, but to get one — improves well before then. One positive was the establishment of a 24/7 call center for the many people who lack internet access (see related story on page 30), something he and dozens of other state lawmakers demanded.

Before that, with online-only signup, “you were locking out whole categories of people,” he noted. As for the website, “it is improving, but it’s still far too confusing and far too hard for people.”

In an address to the public last Thursday, Gov. Charlie Baker acknowledged the frustration around scheduling appointments, but noted that most of it comes down to supply and demand.

“I know how frustrated people are with the pace of the vaccine rollout and how anxious they are to get themselves and their loved ones vaccinated,” he said, but noted that about 450,000 requests for first-dose vaccines arrive each week from hospitals, community health centers, and other entities, but the state receives only 130,000 first doses of vaccine weekly from the federal government.

“We’re putting every dose we get to work each week,” Baker said. “But we don’t receive anywhere near enough vaccine each week from the feds to provide our existing vaccinators with what they request, or to work through most of the currently eligible population that wants a vaccine now. We want people to get vaccinated. We want people to be safe.”

In a hearing with legislators that day, the governor noted that residents have been able to book more than 300,000 appointments through the system despite its flaws, and that Massachusetts is first state in the nation in first doses administered per capita among the 24 states with more than 5 million residents. 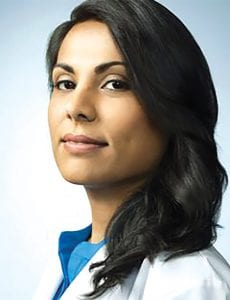 While she understands the supply-and-demand issues, Dr. Nahid Bhadelia says the state’s website troubles have still been “a bit of a disappointment.”

State Rep. William Driscoll, the House chairman of the Joint Committee on COVID-19 and Emergency Preparedness and Management, was having none of it. “I just really want to stress that I think you’re missing how broken the system is right now,” he told Baker, “and the approach is not working for the citizens of the Commonwealth. It needs to be addressed.”

Baker’s hopes for more vaccine entering the state may get a boost from Pfizer and Moderna both annoucing plans to double production in March from February’s levels, and by the Johnson & Johnson vaccine nearing emergency authorization.

“They have some very good efficacy data, and they said they’ll deliver another 20 million doses. That’s a one-dose vaccine, so that’s 20 million more people, hopefully, immunized by the end of March,” said Dr. Nahid Bhadelia, infectious-disease physician and medical director of the Special Pathogens Unit at Boston Medical Center, in a Facebook Live conversation with state Sen. Adam Hines, also on Thursday.

Bhadelia understands Baker’s frustration with supply … to a point. “Demand really outweighs supply, still. But last week’s challenges with the website were kind of drastic,” she said. “That was a bit of a disappointment.”

She and Hinds agreed that a waiting list for a vaccine is one thing, but a waiting room just to get on the site is understandably frustrating for people.

However, she also noted some positives, like a movement at the state level toward delivering more doses to pharmacies and local clinics, after perhaps over-emphasizing the mass-vaccination sites (of which Western Mass., to date, hosts only one).

“I’m glad the governor is going back to clinics. We have to get them where people can access them,” Bhadelia said, adding that distribution through doctors’ offices and pharmacies is a tougher organizational challenge, but worth the effort to help people go to providers they trust.

She didn’t deny the website problems, however. “If they try and can’t access it, one day they will give up.”

And if there’s one thing healthcare professionals don’t want, it’s for people to lose their enthusiasm for getting vaccinated. That’s why the state and various health organizations have rolled out public messaging around the benefits of the vaccine, especially targeting people who might be skeptical of its benefits.

“We recognize it’s a journey, and folks might not feel comfortable with it today, but maybe you’ll feel comfortable tomorrow,” said Lindsey Tucker, associate commissioner of the Massachusetts Department of Public Health (DPH). “We want to be sure that, when you’re eligible for the vaccine, you can access it when you’re ready for it.”

“Even though you’re vaccinated, you still need to wear a mask, stay six feet apart, avoid crowds, and wash your hands frequently.”

Tucker said those words during a webinar held last month by the Public Health Institute of Western Massachusetts, which also featured input from Dr. Sarah Haessler, lead epidemiologist and infectious-disease specialist at Baystate Health, who has emerged as a leading local voice in public information around COVID-19.

Haessler detailed the amount of data that emerged from clinical trials for the vaccines, and noted that the FDA will approve one only if the expected benefits outweigh potential risks.

“The FDA reviewed all the data — it’s pages and pages and pages of data — around every single thing they did in these clinical trials to be sure of the safety and efficacy of the vaccination,” she said, noting that multiple mechanisms are currently in place to track instances of side effects.

While significant side effects are rare — anaphylaxis is one, which is why individuals receiving the shots must remain at the vaccination site for 15 to 30 minutes — most people experience nothing more than arm soreness, fever, chills, tiredness, and headache; most symptoms fade after a day or two, although they last longer in rare cases. Many people feel no effects at all.

“It’s certainly a lot safer to get the vaccine knowing there are just minor side effects than to take your chances getting infected with COVID-19,” Haessler added. “The more people we vaccinate, the closer we get to herd immunity, and the closer we get to going back to life, where we can see our family and friends and return to pre-pandemic activity.”

“The campaign recognizes that there are particular populations, especially people of color and other minority populations, that may have understandable increased concern about receiving the vaccine,” Brown said, noting that Public Health Commissioner Dr. Monica Bharel considers health equity to be a primary priority. “Therefore, DPH is having additional, ongoing conversations about the best ways to try to improve vaccine confidence among some of these groups that are harder to reach.”

At the same time, Haessler was quick to note that the vaccine is not a license to stop doing the things that slow the viral spread. It takes about 10 days for someone to begin developing immunity after the first dose, and full protection doesn’t arrive until about 14 days after the second dose. But it’s still unknown how easily vaccinated individuals can spread the virus to others.

“The bottom line is, even though you’re vaccinated, you still need to wear a mask, stay six feet apart, avoid crowds, and wash your hands frequently,” she explained, noting that vaccination is the last layer of protection, but far from the only one.

It is, of course, a critical one, and that’s a message she continues to spread to those who might be anxious about making an appointment.

“Educate yourself about vaccine safety and talk to trusted sources — your own personal healthcare provider as well as people you know who have been vaccinated,” Haessler said. “Many, many healthcare workers in our community are vaccinated now because we went first.

“I think a lot of our healthcare workers were anxious at first, but as they saw their colleagues getting the vaccine and doing fine with it, they were excited, because now there’s a light at the end of the tunnel — there’s some hope that helped bolster confidence in it,” she went on. “The more we know about this, the more people will feel comfortable with it. Knowledge is power.”

Bhadelia, who is also an assistant professor at Boston University School of Medicine and has spoken on CNN and MSNBC about the pandemic, said she’s optimistic about the fact that COVID cases in Massachusetts have been trending down, while acknowledging that testing has also gone down in the Bay State during the vaccine rollout.

Still, she added, “there is a general consensus that it’s not only the testing that’s gone down; it seems there is truly a drop in cases.”

Concern lingers about the COVID-19 variants, which are currently circulating in Massachusetts, particularly the South African variant, which may affect the efficacy of vaccines. But she noted that, even against that variant, vaccination will reduce the risk of severe hospitalization and death.

Taking a federal perspective, Bhadelia also praised the Biden administration’s approach to the vaccine rollout, which she said is science-based and features regular briefings. “The science is always changing, so it’s really great to stay on top of it instead of just guessing at what’s behind the curtain.”

Most Americans, of course, just want to know what’s down the road. So does the governor.

“We want people to turn the corner on COVID, and I can’t tell you how much we would like to see that happen faster,” Baker said. “But to put to work all the folks who are available today to vaccinate our residents and dramatically increase the number of people able to get vaccinated each week here in the Commonwealth, we’re going to need to see a dramatic increase in federal supply coming to Massachusetts.”

BusinessTalk with with Nick Morin 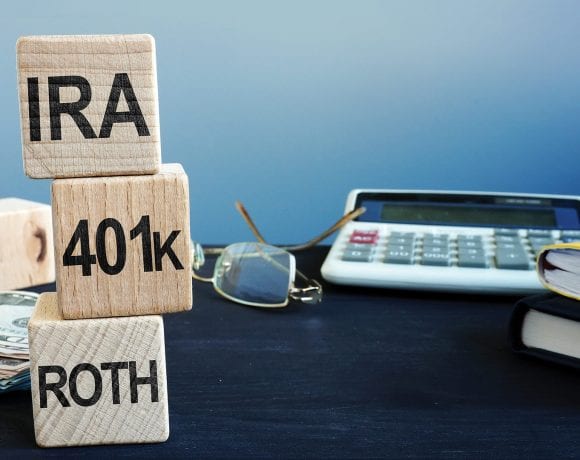 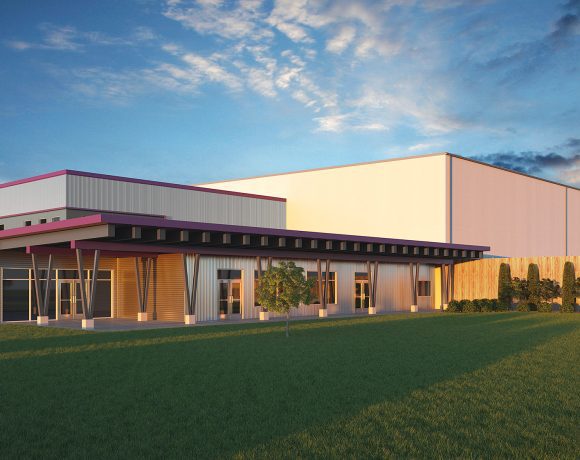