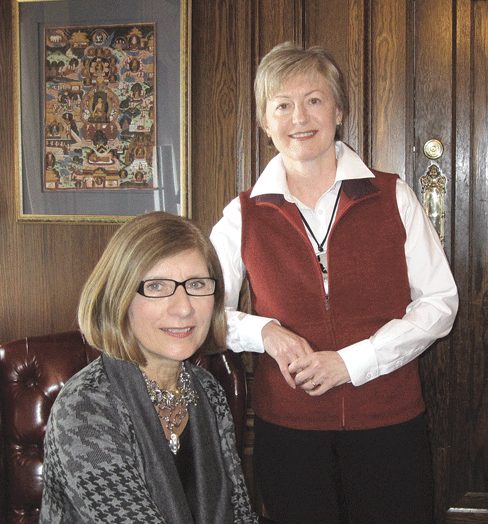 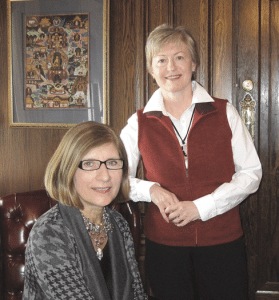 Carol Leary, left, and Caron Hobin say the key to the success of Bay Path’s conference is effectively matching speakers to themes, such as this year’s ‘Be Bold.’

And in that capacity, she has played a lead role in organizing and presenting Bay Path’s Women’s Leadership Conference for the past 18 years. Which means she can name drop — through the conference, she’s met everyone from former Secretary of State Madeleine Albright to author and screenwriter Nora Ephron to poet Maya Angelou. But she’s also had some anxious moments with some of the famous speakers.

Hobin recalled a phone message in 2001 from the representative of the keynote speaker, actress Rita Moreno — the only performer to have been awarded an Emmy, Grammy, Oscar, and Tony —  the night before the sold-out conference.

“She had lost her only living relative the day before,” Hobin recalled, breathing deeply just remembering the stress she endured more than a decade ago. With less than 24 hours to go, getting a replacement was impossible.

“Moreno’s representative said that they’d let me know the next morning if she was coming,” remembered Hobin, who said she had no idea what to expect. But at 11:30 a.m. on the day of the event, Moreno called her directly and said, “I’m going to honor this commitment; I’m a performer, and I’m coming.”

And the show went on, just as it has every spring since 1996.

While Hobin remembers that scare, she has many more memories of inspiring speeches, educational programs, and Bay Path students enjoying the unforgettable experience of being escorts for those who take to the podium (more on that later).

This year, one student will have the honor of being escort for musician, actress, author, and entrepreneur Queen Latifah, the main keynoter for the March 22 event at the MassMutual Center. Latifah’s unique personality is just one manifestation of this year’s theme, “Be Bold,” which is based on the new Bold Scholarship to help students disadvantaged by the recent recession.

Bay Path President Carol Leary called the rest of the day “an amazing lineup of speakers” and promises that professional women, students, and interested individuals will be boldly inspired, entertained, and, above all, educated. Other speakers include Susan Cain, author of Quiet: The Power of Introverts in a World that Can’t Stop Talking, and Jenn Lim, CEO and ‘chief happiness officer’ of Delivering Happiness, LLC, who will discuss shaping a corporate culture.

Leary emphasized the educational component of the conference — which is modeled after a program both she and Hobin experienced while working at Simmons College — is geared especially toward alumni who not only never stop learning, but, like all professional women, want to be refreshed, inspired, and motivated by nationally and internationally known speakers.

“The beauty of this program is that it’s not just inspiration and motivation, but useful information, so that women can go back to their office the next day and say, ‘I just learned in one of the skill-building breakout sessions how to encourage introverts and extroverts  … practical tips I can use immediately.’

“That was one of the two primary purposes for putting the conference together,” she continued. “One, we wanted to expose our own students, faculty, staff, and alumni to well-known, well-respected, influential women, and two, it was an opportunity to bring it to a large venue to serve the outlying community.”

For this issue and its focus on education, BusinessWest takes an in-depth look at how Bay Path College’s conference has become part of the landscape in Western Mass., and how, after nearly two decades, it continues to evolve, mature, and give area professionals plenty to think about.

“I told her what her first assignment was,” Leary said with a laugh before Hobin finished the sentence for her: “the conference.”

Hobin said she was very familiar with the Simmons model for a women’s professional conference, and remembers thinking to herself, ‘how hard could it be?’

By March, she would find out — there were a number of challenges, logistical and otherwise, with staging the inaugural conference at the Sheraton and Marriott hotels in downtown Springfield, but she was helped in her efforts by successfully landing keynote speaker Elizabeth Dole (then-director of the American Red Cross). This was a timely booking since her husband, then-U.S. Sen. Bob Dole, had just announced that he would run as the Republican candidate in the 1996 presidential race. (Elizabeth Dole would later run for president herself in 2000.)

“Getting Elizabeth Dole as our first speaker really helped — that was the first big ‘get,’” said Hobin.

There have been more since, she told BusinessWest, adding that securing speakers is one of many responsibilities that fall to the team tasked with orchestrating the conference each year. That team includes Hobin; Leary; Kathy Wroblewski, director of Communications and Marketing; and Briana Sitler, director of Special Events.

To be more specific, the assignment is to match speakers to a theme, said Hobin, which is an intriguing process. “Sometimes the theme comes first and then the speakers follow, and sometimes a really great speaker becomes the lead and then a theme emerges as a result.”

While planning the 2012 conference, Hobin kept hearing, seeing, and reading the word ‘compassion’ in various publications and electronic media. Using Wroblewski as her barometer, Hobin started to pare down concepts and wordsmith possible titles for a theme (“Lead with Compassion” was eventually chosen), while also locking in a keynote speaker whose work is the epitome of compassion — Sr. Helen Prejean, a leading advocate for the abolition of the death penalty.

“I pick up on little cues, and it’s an evolution,” Hobin told BusinessWest, adding that everyone from staff to students is involved. “And I tell the students this: the universe sends you messages; you just have to listen.”

Looking back, Hobin said the theme for the 2011 conference, “The Power of Choice,” was shaped in part by a Legal Studies student who was forced to drop out of the college for financial reasons.

Her former Bay Path professor bumped into her at the job she took to make ends meet, and, through the course of their conversation, learned about a book she was enjoying titled The Other Wes Moore. The teacher made the Bay Path staff aware of the book, which then became the summer ‘common read’ for all incoming freshmen.

Hobin, connecting the student’s financial issues and subsequent decision and the subject matter of the book — choice  — created the theme and landed the author, Wes Moore, as the morning keynoter.  The student in question actually became his escort, to assist him for the day.

Leary remembers seeing the student point out an underlined part of the book to Moore — the most critical part of the book for her, and, as it turned out, for Moore as well. During his keynote, Moore referenced the student in the large audience to explain how profound her life could be just by making a different choice.

“The part that she underlined was, ‘you will step out, but you will step back in if you want it bad enough,’ and you could see the emotional connection right then,’” said Leary, noting that the student did come back and finish her degree. “There’s a lot of learning that goes on during the conference on so many different levels.”

As just one example, she recalled the 2005 conference, headlined by Albright, the first female Secretary of State, who availed herself to sit with 15 students and Leary at a large table at the Marriott.

“There was an incredible dynamic between our students and this powerful woman,” said Leary, who distinctly remembers the students asking Albright who she thought would be the first female president — as well as the answer, Hillary Clinton.

“We really believe that we’re educating not only our own community,” said Leary, “but the professional women in the region who can be inspired by women, like Madeleine, that they may never have had the chance to meet otherwise.”

The opportunity for students to meet the keynote speakers is vital to the internal success of the program, said Hobin, adding that it has created a few much-coveted escort positions over the past 18 years. And the more famous the speaker, the more in demand the escort position is, said Hobin, adding that those seeking it must submit a two-page essay explaining why they want such an assignment. Applicants must then go through a rigorous series of interviews.

“Be Bold” might be the theme for this year’s conference, but that phrase also constitutes the unofficial directive for those organizing and presenting the conference since the beginning.

They have been bold — and imaginative and, above all, diligent about providing attendees with a program that will not only inform, but also inspire.

Their track record for success has made the conference a spring tradition in Greater Springfield — and a learning opportunity that, as Leary noted, comes on a number of levels. 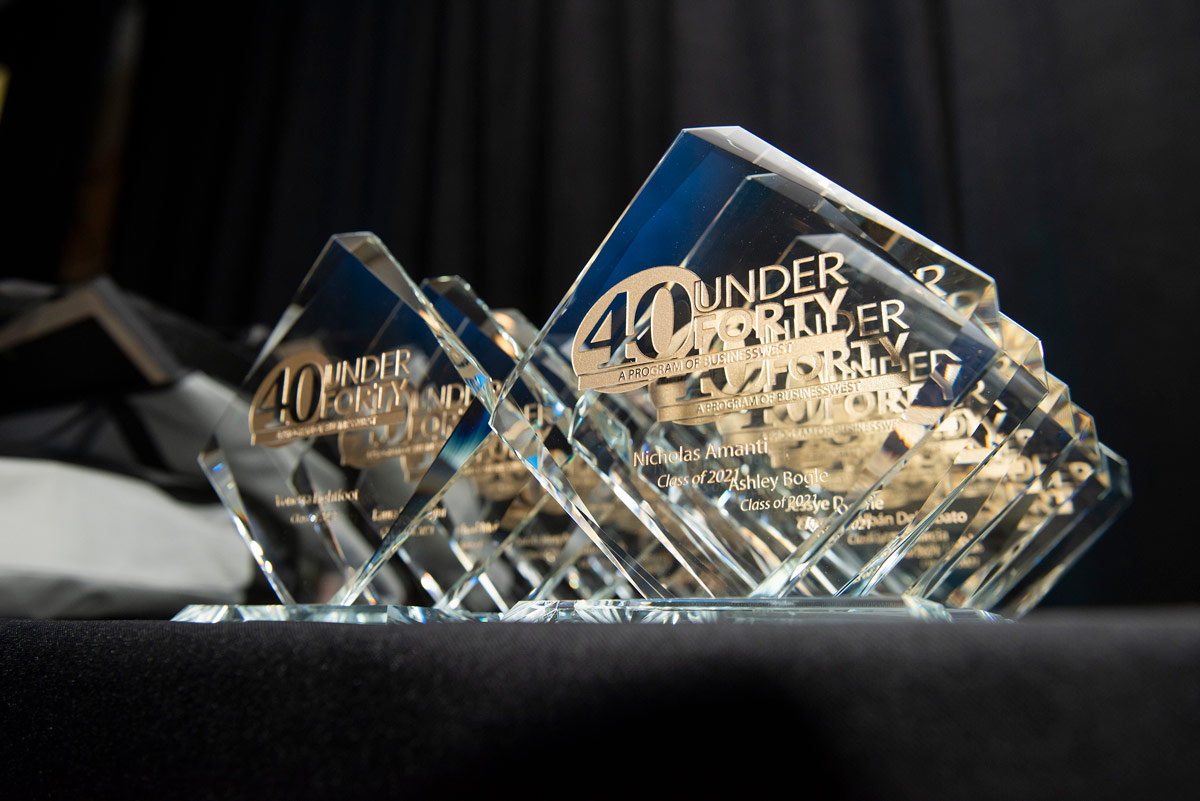