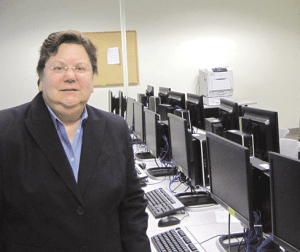 Terrie Forte says there were a number of motivating factors behind Cambridge College’s relocation from Cottage Street in Springfield into former retail space in Tower Square, in the heart of downtown.

There was the desire to upgrade and modernize the facilities at the Cottage Street location, she said, noting that they had been in use for more than 20 years and had been carved out of former industrial space not exactly suited for higher education. And there was a need for both more immediate space and room for likely expansion of this school that serves mostly working adults who need graduate or undergraduate degrees to advance their careers.

But the overriding motivations were the need for both more exposure and better accessibility, factors that have been verified since the doors to the new facility opened several weeks ago.

“The most interesting thing we’ve learned in this relocation process,” said Forte, director of the school’s Springfield Regional Center, “is that, even though we’ve been in the area for 20 years, many people don’t know about us and what we do. But it shows us just how much potential we have here.”

Indeed, Forte has already noticed an uptick in inquiries from prospective students, especially younger individuals looking for degree-completion options — one of the school’s many realms of service.

“What we’ve seen is a lot of younger people coming in, just because of the new location,” she said. “And generally, they will come to us for degree completion.”

And while the new location appears to be already paying dividends for Cambridge College, the move is also benefiting the long-struggling Tower Square.

For starters, space that had been dark for more than a decade (since former tenant U.S. Factory Outlets moved out) is now vibrant again. And the presence of students, faculty, and administrators on the ground floor of the retail and office complex is breathing some new life into the facility.

“Every time I go down the escalator and see those windows [adorned with the Cambridge College logo], it puts a big smile on my face,” said Fred Christensen, senior property manager for CB Richard Ellis, which manages Tower Square.

The move took more than two years to plan and execute (somewhat longer than initially expected),  but it already appears to be a smart move, in more ways than one, with the school gaining valuable exposure from its Main Street address, as well as much greater accessibility off nearby I-91.

Turning back the clock roughly three years, Forte said senior administrators at Cambridge College had reached the conclusion that, while the Cottage Street location was still in some ways adequate, a larger, more modern, more accessible location was needed if the Springfield center, one of six located across the state, was to grow.

“Being the first regional location for the college over 20 years ago, we were the one most in need of an upgrade,” explained Forte. “But once the college decided they would make the investment, it was the question of, ‘where do we do it?’”

Many locations in the city were considered following strong response to a request for proposals issued by the school, she told BusinessWest, adding that the Tower Square site most effectively addressed the college’s needs and concerns.

“Not only could we provide them with a large, contiguous space and exterior street exposure,” said Christensen, “but the parking component was a big factor in terms of keeping their students safe.”

Forte agreed. “The average age of our students is 38, and they are adults in career transition,” she explained. “Some don’t have cars, or they’re busy parents who require flexible schedules, so most of our class time is nights and weekends, and safety, from the very beginning, was absolutely my number-one concern.”

Overall, the new location will enable the Springfield center to better attract and then assist the many constituencies it serves, she went on, noting that Cambridge College caters to a diverse population of adult learners for whom higher-education opportunities may have been limited.

In this tight job market, she noted, employers can be somewhat demanding, and that means that many job seekers will need additional skills or degrees to advance in their chosen field or move into a new one.

“We’re seeing many people who find themselves unemployed or underemployed and are looking to change that, and what’s great about Cambridge College is our rolling admission policy,” said Forte. “There aren’t any barriers; you get here, and you prove yourself.”

To emphasize that point, she referenced one of the school’s newest offerings, called the Portfolio Program. It allows students who have already been working in the human-services field, for example, to earn a degree in that course of study.

The most appealing aspect of the program, Forte explained, is that work-life experience is taken into account, and while most students still have considerable work to do to earn their degree, attending a rotating class schedule is not necessary; meeting periodically with the advisor is. Essentially, the Portfolio Program is customized for each student, based on what skills and experiences he or she has gained over time.

“It’s definitely not an easier path by any means,” she said, “but for some of our students, it does allow them to not have to go to class.’”

Currently, Forte said, the college serves approximately 300 adult students and employs 50 faculty members, 10 of whom hold administrative posts. The school offers graduate-degree programs in education, management, and counseling and psychology, many of which lead to licensure and certification. Undergraduate degrees are also offered in human services, management, and multidisciplinary studies.