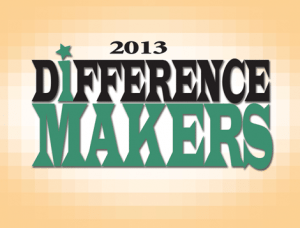 Details are falling into place for the March 21 Difference Makers Gala at the Log Cabin Banquet and Meeting House in Holyoke, one of BusinessWest’s premiere events and now an early-spring tradition in Greater Springfield.

The menu for the lavish buffet is set, the traditional musical performance featuring area young people will spotlight the Children’s Chorus of Springfield, and the Taylor Street Jazz Band will again be on hand to provide entertainment throughout the evening.

The biggest news, of course, has been known for about a month now — the composition of the Difference Makers Class of 2013, one of the most intriguing and diverse groups since the start of the program in 2009. This year’s honorees are:

Michael Cutone, John Barbieri, and Thomas Sarrouf, organizers of Springfield’s C3, or Counter Criminal Continuum, Policing Program. The initiative, which makes use of counter-insurgency tactics used by U.S. Special Forces troops in Iraq and Afghanistan to combat gang violence and crime, has been successful in making residents of the Brightwood section of the city far more actively involved in the safety of their neighborhood. It has also succeeded in bringing about reductions in many categories of crime, including larceny, weapons violations, burglary, and motor-vehicle thefts.

John Downing, president of Soldier On. Over the past several years, Downing has created a number of programs to improve quality of life for veterans returning from service, all designed with the Soldier On slogan — “changing the end of the story” — firmly in mind. Perhaps his most celebrated accomplishment is an initiative that provides veterans with the opportunity to transition from homelessness to home ownership through a program that enables them to purchase an equity stake in their homes.

Bruce Landon, president and general manager of the Springfield Falcons. Over the past 45 years, Landon has gone from being a goaltender with the local American Hockey League franchise to holding nearly every title in the club’s front office, including his current role as general manager and co-owner. More significantly, though, he has put together ownership groups on three separate occasions, enabling Greater Springfield to retain its hockey team and thus reap the many benefits, including the economic boost to area businesses.

The Sisters of Providence, represented by Sr. Mary Caritas, SP, and Sr. Kathleen Popko, SP. Now celebrating the 140th anniversary of their arrival in Holyoke at the start of the Industrial Revolution, the Sisters of Providence are being honored for their long tradition of service to the community, especially in the broad realms of healthcare, education, and social service. The sisters’ mission — to serve segments of the population most in need and generally overlooked by traditional programs — is manifested today in programs such as Healthcare for the Homeless, methadone clinics, and cutting-edge elderly-housing initiatives.

Jim Vinick, senior vice president of investments at Moors & Cabot Inc. Vinick has a long and distinguished track record of service to the community, which is punctuated by his work with the Naismith Memorial Basketball Hall of Fame, which he has served in a number of capacities, and the Jimmy Fund, the fund-raising arm of the Dana Farber Cancer Institute, a cause that became a passion for Vinick after his son, Jeffrey, lost his battle against a rare form of testicular cancer in 1982.

“This year’s honorees provide more direct evidence that there are many ways for an individual or group to make a difference in this region,” said BusinessWest Editor George O’Brien, “and all of them are important to overall quality of life.”

In the Same Boat Together