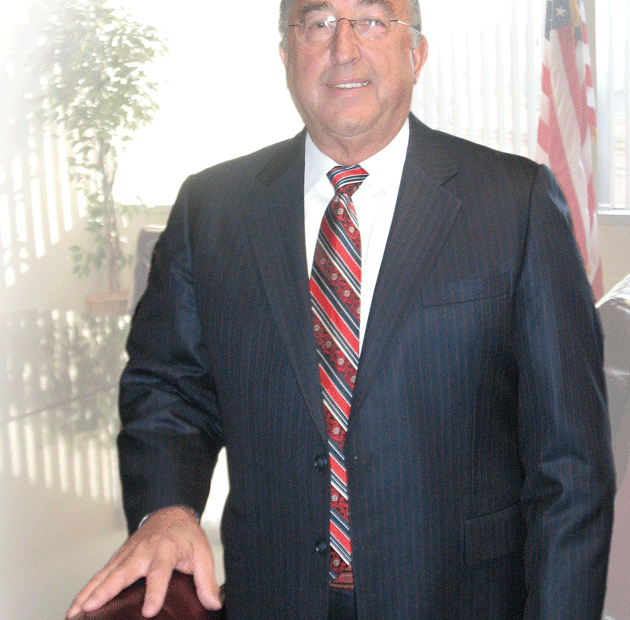 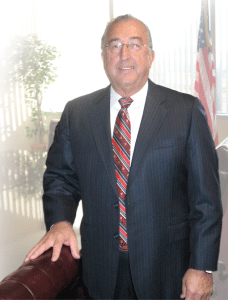 Ray Catuogno didn’t graduate high school with plans to become a court reporter. But when opportunity knocked, he ran with it, and eventually founded a company that employs about 700 people nationwide, providing transcription services for the medical, legal, law-enforcement, and insurance fields. His story is a case study in how embracing new technology, and being willing to change with the times, have continually opened doors for growth.

In the front lobby of StenTel in Springfield, several shelves are lined with decades-old typewriters, adding machines, and other outmoded devices.
One is a Dictaphone that used wax cylinders to make recordings; to erase a message and start over, the wax was simply heated and melted. Against another wall sits a Graphotype, a century-old machine that punched words onto paper from metal plates. One of the typewriters dates from the 19th century.
Among these devices, which Raymond Catuogno has collected over a lifetime in the transcription industry, is the first dictation machine he used to record court proceedings some 40 years ago. He would keypunch words onto reel-to-reel tapes, which a secretary would type onto paper. “How far we’ve come,” he said.
Indeed, Catuogno — who launched Catuogno Court Reporting in 1978 and later expanded the business to medical dictation and other fields under the name StenTel — is now president of a nationwide network of transcription services that employs the Internet and state-of-the-art communication tools to provide clients with same-day or next-day turnaround.
“We’ve grown to approximately 700 people working for the firm, across the United States,” he said. “Most of them work out of their homes, using the Internet, doing transcription for us.”
It’s a classic story of a business model that rode a wave of technological advances to grow market share. In this issue, BusinessWest examines how StenTel has continually staked out new ground on the cutting edge, and why this family business is well-positioned for the next wave of changes, particularly in health care.

Courting a Career
Catuogno’s life may have been completely different had he not taken a typing course as a teenager.
“After high school, I wanted to build skyscrapers and bridges around the world. But my father said, ‘geez, Ray, I don’t have the money to send you to college; what about joining the Navy on the GI Bill?’ I said, ‘sure, Pop, no problem, I can do that,’ and I joined the Navy.”
He ended up stationed in Key West, Fla., and because he had taken that high-school typing class, he was assigned an administrative role there. Later, his boss sent him to Newport, R.I., where he went through the Naval War College, learning about military law. After that, he returned to Florida, where he served as a court reporter for Navy court martials in Key West and similar Air Force proceedings at Homestead Joint Air Reserve Base in Miami.
“Back and forth along the Florida Keys for three and a half years … that was a really good duty,” he recalled with a smile.
After his military service, Catuogno brought his skills back home to Springfield, where he took a job as a court reporter at Hampden Superior Court, and also started picking up freelance work in courts across the region. In 1978, sensing a growing opportunity, he launched Catuogno Court Reporting, and eventually grew it to five offices, in Springfield, Boston, Worcester, Chelmsford, and Providence, R.I.
But that was only the beginning.
“Over the course of time, we ended up helping a gentleman out with medical transcription, and medical transcription was becoming a national type of business, so we started doing that, too,” Catuogno said. Transcription for insurance companies and police departments soon followed.
But medical transcription was a slower process back then, and required employees who were local.
“The way it used to be done was on tapes — cassette tapes, or even reel-to-reel tapes when we first began — and it’s changed along the way,” he said. “We went from tapes to phone dictation with 800 numbers, and then, of course, to the Internet.”
Catuogno’s son George joined the company in the mid-’80s and eventually took the reins of the medical-transcription side of the business.
“When we entered into medical transcription, we were transcribing cassette tapes for the first customers we picked up,” the younger Catuogno told BusinessWest. But even after the Internet, “we saw an opportunity to further develop that part of the business and do it well. We wanted to get the technology that would allow us to pick up and support customers anywhere in the United States, and wouldn’t be limited to the local region.
“When we went down that road,” he continued, “we saw what technology was available, and we saw an opportunity to develop our own technology.”
The breakthrough was the company’s development and patent of a system of combining audio and text in the same database, allowing doctors, police officers, or other clients to dictate information into the system and print out the transcript from the same location the next day. That technology allowed Sten-Tel to grow rapidly nationwide.
StenTel has since adopted speech-recognition technology and developed a product called Natural Language Processing, that codifies items such as problems, findings, allergies, procedures, lab tests, etc. That capability will streamline the construction of electronic medical records, which will soon be required of all medical practices in the U.S.
That federal mandate, George Catuogno said, will only make cutting-edge medical-transcription services more important, as doctors, by and large, are not going to want to keypunch their own records.
“That’s just not going to happen. In smaller markets, the low-volume guys may be willing to do that, or have their staff do some of that work,” he said, but he predicts most offices will rely on transcription professionals who can create those documents with speed, completeness, and efficiency. “In the end, time is money for these guys.”

New Opportunities
StenTel has built its client roster to more than 7,000, including some of the largest hospitals in the region, including Baystate Medical Center, Mercy Medical Center, Holyoke Medical Center, Wing Memorial Hospital, and UMass Medical Center, as well as Mass General and Brigham and Women’s Hospital in Boston.
“Police, lawyers, doctors — they use handheld recording devices, and they download those through the Internet, and thousands of reports come here daily,” Ray Catuogno said. “Transcriptionists located across the country access those reports, transcribe them in their homes, and then send them back to our mainframes.”
From his start in a one-room office on State Street, Catuogno’s Springfield operation now occupies the entire sixth floor of Monarch Place downtown. And with additional space has come new avenues for business.
“Our five New England offices are set up for attorneys to use,” he said, gesturing around the large conference room where he spoke to BusinessWest. “Lawyers come in and do arbitrations or depositions here just about every day. It gives attorneys a neutral place to go, which works well for the legal profession.”
The offices are also equipped with videoconferencing equipment, so individuals, groups, or companies can connect to some 10,000 sites around the world. “We can connect to China, Russia, Japan, South America, Europe … almost anywhere in the world.”
Like the use of StenTel offices by attorneys, this was a service that grew organically, and made sense. “It’s expensive to fly, and time-consuming,” Catuogno said. “Here, talking to someone on the TV screen, within five minutes, it’s like they’re here in the room. It’s amazing how it works.”
When asked what he enjoys most about this work, Catuogno immediately cited the relationships he has built over 45 years in the profession — with attorneys and court personnel, insurance companies and medical practices, and the public, but especially with the people his growing business employs.
“One of the things I enjoy is seeing young people come into this business and start their lives — lots of them don’t even have an apartment or an automobile — and then begin to grow,” he said. “As their lives evolve, down the road, you see them get their car, get their apartment, eventually become engaged, get married, have children, and really launch their lives.
“I call them all my family, my working family,” Catuogno continued. “I feel close to all the people here, and I love to see their successes. That’s probably my favorite part of doing this work today.”
But it’s a family business in the literal sense, too, as three of Ray’s children work in the Springfield office full-time, and another daughter, a teacher, helps out during the summer.
“That’s the exciting part,” he said. “The family being here means the business will continue for years to come and, I’m sure, become a much larger and more exciting business with all the new technologies coming on line.”
Whether it’s giving credit to the people who helped grow StenTel into a major player in transcription or proudly displaying those typewriters and dictation machines from the last century or two, Catuogno hasn’t forgotten the past as he looks to what promises to be a bright future. n