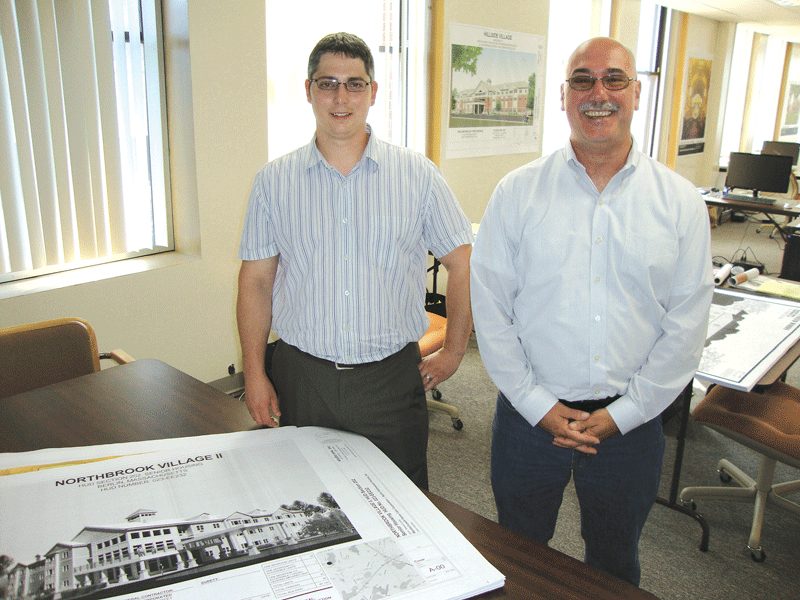 A Study in Perseverance

At Studio One, Knocked Down Doesn’t Mean Knocked Out 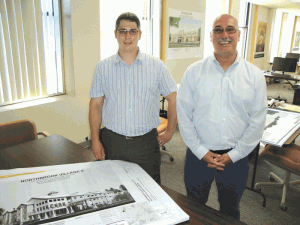 Greg Zorzi (right, with Chris Novelli) says it was important to get back to work after the tornado, for the sake of not just ongoing projects, but also Studio One employees.

When remembering the events that took place on June 1 and 2, Greg Zorzi paused and looked out the window onto the streetscape below in downtown Springfield, and when he began to talk again, his words were shaken, yet strong and clear.
Like many in Springfield and beyond, the historic tornado changed Zorzi’s world in a single day. The stately Civil War-era brick block known as South Commons that his parents, the original Studio One architects, had renovated and owned was badly damaged one day, then demolished the next. Among several other businesses were the offices of Studio One architects and planners, as well as the Zorzi home.
Sitting in the offices that became the latest headquarters for this architectural firm that has been in existence in Springfield since 1974, he said that, while the business was dealt a great blow both physically and spiritually, the show must go on.
“I strongly believe in the expression that whatever doesn’t kill you makes you stronger,” he said, smiling. “We had a city water main break about 10 years ago down there, and we were flooded. We thought that was bad!
“But not only was it important for us to get back to work, to get to the projects that we had been working on right after the tornado hit,” he continued, “I’m responsible to all these people who work here. That is what kicked in. We can’t focus on the negative; we have to move forward.”
Talking about what has driven Studio One since the earliest days of the firm, back when his parents, Peter and Melinda Zorzi, were principals, he said that one of the greatest factors in their strength is wrapped in one word, endurance. “You need a tremendous amount of drive to succeed in this business.”
It’s not just all sweat that makes a good architect, he went on. “What we do, and what my father taught me from an early age, was to build goodwill with clients. That means going the extra mile, never mind whether something is an additional service or not. That’s the best advice I ever got. And because of that, folks call us back.”
Very soon after their offices were destroyed, Studio One relocated to 115 State St., and it was here that Zorzi spoke to BusinessWest. In a suite of rooms that doesn’t have the appearance of a makeshift space created on the quick, Zorzi told the story of how he came to be where he is today.
Glossy images of the buildings his firm has designed over the years line the walls, and with that backdrop, he said that the South Commons location may have been part of the firm’s identity — having been its home for over 25 years — but there’s a silver lining somewhere in that story, somehow.  It’s clear that the endurance he talks about will give Studio One a firm footing to set forth on its next endeavor (more on that later), to be started this fall.

Historic Preservation
A solid book of work in Studio One’s portfolio comes from multi-family housing and SRO (single-room occupancy) projects, and this goes back to the days when Greg’s father Peter was at the helm. Projects have ranged from luxury condo units to the redevelopment of historic properties for housing in Westfield, with a range that covers most of Southern New England.
The firm was one of the businesses instrumental in the revitalization of the historic Matoon Street area in Springfield. Years later, historically sensitive new construction took place in that district, and that, Zorzi said, is one area where his firm excels.
Reiterating the notion of goodwill that he mentioned earlier, he said this has been a great asset not just for his clients, but for his business as well. With many projects over the years funded by HUD money, sometimes going the extra mile meant a repeat customer — many times over. 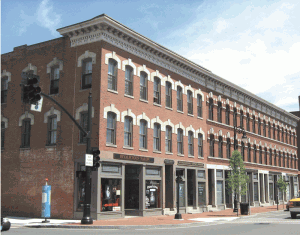 “One of the distinctions of our firm is that we are very willing to work up front with our clients, especially with those HUD projects,” he said. “They might need assistance with funding, or any amount of assistance in getting their project off the ground. Oftentimes we’re not paid a nickel until the construction documents are 100% done. Then we receive DPG [demonstration program grant] monies from HUD — and then we’re paid. We’re way out there though from the start.”
Repeat customers, from HAP Inc. to Domus in Westfield to the Sisters of Saint Joseph, have been a significant component to how Zorzi’s firm has kept busy and how, unlike other firms its size, it has never had to downsize in staff. “Again, from working with my father, this is how I learned how to build a business,” he said.
With his father in a strong leadership role from the start, Zorzi laughed when talking about succession issues when he became president. While Peter is still active in the firm — “he knows so many people in the industry; he’s an incredible asset, and we still get work from his numerous contacts” — it was natural for the child who started running errands at the age of 10 to eventually take over someday.
After graduating from Boston Architectural College in the 1980s, Zorzi went to work for a large firm in the Hub. It was good experience, he said, but he knew he wanted to return to a smaller-sized shop.
“I was still working there,” he remembered, “when I asked my dad one day at a wedding, ‘are you going to ask me to join the firm or not?’ His response was, ‘I thought you were happy in Boston!’ and then, ‘of course!’”

Student Loans
There are many events that can shape the history of a business. While the events that took place after the tornado are a significant obstacle, Zorzi firmly said that this is a hurdle, but not a dead end.
His comments were carefully thought out, and it’s clear there’s a lot of hurt still there. But he repeated again that one word as an overarching answer to all of what transpired: “endurance.”
“When the city demolished South Commons, we were all greatly saddened,” he said. “I thought the city’s approach was heavy handed and capricious, and not thought out. Those buildings were secured. When we found that block in 1980, it was in worse shape than what happened by the tornado — the section of wall that was damaged and knocked down was a non-load-bearing wall.
“But the worst part,” he continued, “is that we’re licensed architects, and we weren’t even consulted on the fate of those buildings. We were told by City Hall that FEMA was calling the shots, but we later found out that was wrong, that the building commission was. No question in my mind, those buildings on the National Register of Historic Places could have been saved. It’s hurtful. I think the city has made some grave errors in judgment, and we’re calling them out on that.”
Then he stood up from the desk and called in his project manager, Chris Novelli. “There might be a good ending to this story after all,” Zorzi said.
It will start this fall, as Novelli teaches a graduate-level seminar in the Architecture + Design Department at UMass Amherst, to be held in Court Square. “It’s going to be a South End reconstruction studio,” Novelli said. “It’s still in the planning stages at this point for scope and focus. And this is not going to be a purely tornado-based program, but rather taking a broader-based look at the South End — the history of it, what problems exist, and how to create development opportunities.
“I think the biggest goal is that the students learn something,” he continued. “But I personally hope that some of these ideas that the students will eventually come up with will help the city leaders and planners see potential for what they can do, rather than trying to get in any developer who is just willing to do anything there.”
Zorzi added that he would like to see business and civic leaders engaged in the session as well, to act as ‘clients’ of a sort for the students’ projects.
“This is about healing. Even if it’s just a vision for what can be, it’s a healing process,” Zorzi said. He was referring specifically to the UMass program, but it was clear that this architectural firm’s president was also thinking about Studio One, and the city he has called home most of his life.