Sarah LaCour says the Business Improvement District and Amherst Area Chamber of Commerce have moved into a storefront to form the Amherst Visitor Information Center downtown.

When Jerry Guidera decided to join Barry Roberts, Dave Williams, and Kyle Wilson to create a new co-working space in Amherst, their objective was clear.

“We wanted to entice young entrepreneurs to stay in Amherst,” he said.

Roberts owned the historic First National Bank building in the heart of downtown on 11 Amity St. which the trio identified as an ideal spot, and after an extensive, four-month, $500,000 renovation that resulted in a state-of-the-art workspace with a kitchen, the doors opened late last fall.

It addition to areas with shared desks and tables, there are 10 individual offices, and seven were rented long before work on the structure was finished.

“What makes this unique is that it is a 1928 building with a gigabyte of wi-fi, which is 100 times faster than standard wi-fi service,” Guidera said.

People who want to use the co-working space become members on a month-to-month basis. They can opt for a flex space for $225 a month that allows them to sit anywhere, a dedicated desk for $425 a month, or an office space that starts at $600.

The trio of investors made it a point to involve local businesses in their venture: coffee from Amherst Coffee is brought to the site daily in large containers, the artwork on the walls comes from local artists, and the copy machines are leased from Amherst Copy. They also partnered with WorkBar, a co-working space in Boston with 15 locations, that members have access to when they are in different parts of the state.

The second-floor mezzanine area will also house a new venture when the Kayon Accelerator at AmherstWorks opens later this month.

It is run by Kayon Partners, a Boston- and New York City-based group that invests in seed- and early-growth-stage companies and provides them with services designed to help them progress rapidly into viable, venture-based businesses.

The accelerator will run two programs each year with entrepreneurs from UMass Amherst. Members of Kayon Partners include Steve Garrow, David Vogel, and Tim Mitrovich; Garrow is an Amherst College graduate who was a former entrepreneur in residence at the university.

“UMass has grown into an advanced graduate institution, and we hope the Kayon Accelerator will provide a landing spot for local entrepreneurs’ energy and enthusiasm,” Guidera said, noting that the next step will be to keep them in town when they finish the program.

Town Manager Paul Bockelman added that Amherst has become especially popular for tech companies because UMass generates many ideas that could be incubated.

“We are a magnet for the development of new businesses,” he said, adding that MassMutual opened a data lab in the fall of 2015 to attract the talent that is concentrated there.

For this first installment in the 2017 Community Spotlight series, BusinessWest looks at other new projects as well as measures Amherst is taking to fulfill the need for economic development while retaining the historical characteristics of the town that is home to more than 33,000 students when Hampshire College, UMass Amherst, and Amherst College are in session.

Last month, the Amherst Area Chamber of Commerce and Amherst Business Improvement District (BID) moved into a shared space on 35 South Pleasant St. that they turned into a Visitor Information Center.

“It’s really exciting, and our goals include welcoming parents of college students; we reach out to them through UMass, but they often stay on Route 9 or come through Belchertown, and although they are within a quarter-mile of downtown, they don’t know we are here or what we have to offer,” said Sarah LaCour, executive director of the BID. “The new information center gives us a face on the street, and we hope to have it open evenings and weekends.”

Bockelman is equally enthusiastic about the new center. “We haven’t had a central location for visitors to learn about our cultural attractions and restaurants for more than a decade,” said the Hampshire College graduate, adding that, last year, Amherst was designated a cultural district by the state due to attractions that include the Emily Dickinson Museum, Jones Library, the Town Common, the Eric Carle Museum of Picture Book Art, and the Yiddish Book Museum at Hampshire College. Other attractions include the Mead Art Museum at Amherst College, galleries at UMass, and the Amherst Cinema Arts Center, which is one of the few theaters in the region to offer first-run independent films.

“Over the past few years, our downtown has changed from being a retail area for college students into a place focused on culture and restaurants,” noted Economic Development Director Geoff Kravitz, who grew up in Amherst, explaining that Amazon has a new center on the UMass campus and most students shop online. 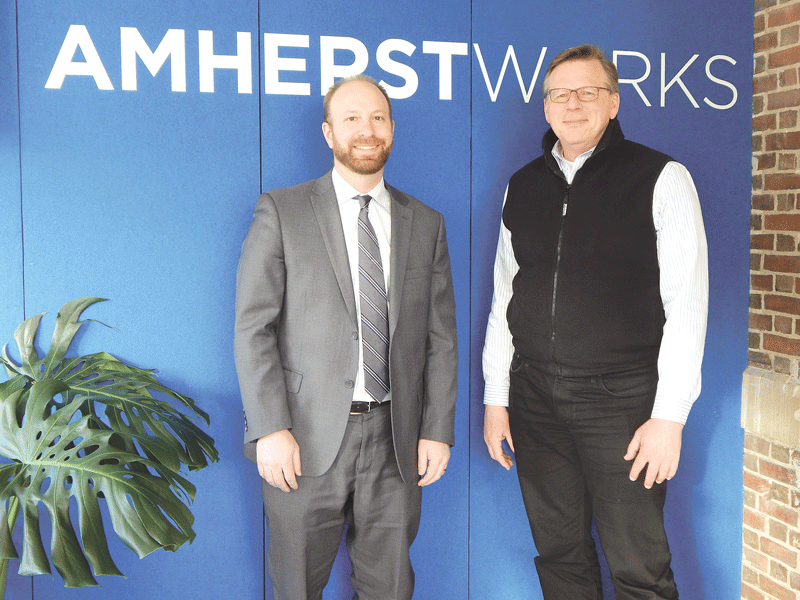 The town is also home to two buildings that have met the standards of the Living Building Challenge: the Hitchcock Center for the Environment, which offers a variety of programs and professional-development opportunities, and the R. W. Kern Center at Hampshire College, which serves as a living laboratory where students and the public study its systems and performance that are tied to measures for sustainability.

In addition, the town offers recreation in the form of 80 miles of hiking trails that include the K.C. Trail, the Robert Frost Trail, and the Norwottuck Rail Trail. Before he was named town manager last August, Bockelman said, he and his wife came to Amherst for a wedding, and arrived early with other guests to take advantage of the hiking.

“I can walk out my back door and get on a trail that goes throughout Western Mass. or walk 20 minutes and be at the cinema or dine at our many restaurants,” he told BusinessWest. “There aren’t many places in the world that have both types of offerings literally at your door.”

Kravitz noted that he has seen an increase in people who telecommute who have moved to the town due to these recreational and cultural offerings.

“Amherst has put a lot of effort into maintaining its hiking trails, and the number of people who live here or come just to use them is significant,” he said. “We still have the feel of a rural community due to the farmland and amount of open space that has been preserved, which many communities have lost to housing developments. But our town officials are very purposeful: they want to develop certain areas but create a balance and preserve the small-town feeling that exists here.”

Several new development projects throughout the town have been proposed or are underway.

Archipelago Investments LLC of Amherst is building a new, five-story structure at One East Pleasant St. that will have 7,500 square feet of commercial space on the first floor, and 135 apartments on the upper levels that will range from studios to one- and two-bedroom units.

The building that stood on the site and housed the former Amherst Carriage Shops has been demolished to make way for the new structure. But the mural that detailed the town’s history on the back of the Carriage Shops will be recreated, and Archipelago has contracted with artist David Fichter, who painted the original mural, to document and replicate it on the new structure.

“The new building is in our downtown and will allow for a lot more density,” Kravitz said, explaining that the project is in line with the town’s 2010 master plan that showed a need for additional housing and commercial space in the business district.

“We want new development to occur downtown, in the North Amherst Village Center, in South Amherst, and East Amherst so we can preserve our existing neighborhoods and open space,” he continued.

In addition to One East Pleasant St., the first office building to be permitted in 30 years will be built across the street at 236 Pleasant St.

“It will create 20,000 additional square feet of commercial space,” Kravitz said, explaining that two buildings were demolished and the land they were on was combined to make room for the project, which was delayed until recently as the Historical Commission had put it on hold for a year.

The new structure was designed by Kuhn Riddle Architects and is being built by developers Barry Roberts and J. Curtis Shumway on land where North Pleasant, East Pleasant, and Hallock streets merge, across from the southern tip of Kendrick Park.

It will contain 22,000 square feet of commercial space that will be built to surround what will seem like a typical New England square and have 130 residential units on its upper floors, with 30 affordable units for people at 50% or below the median income in the area.

“Our housing studies have shown that there is a lack of affordable housing here, so it would certainly make a difference,” Kravitz said, adding that the plan is to build on a site that housed a former sawmill but hasn’t been used for a decade, and that structure will be demolished to make way for the new development.

He told BusinessWest that the town purposefully located all of its permitting boards on the second floor of Town Hall to make it easier for developers. He also explained that his position is fairly new; he was hired about a year ago as a full-time employee.

Amherst’s restaurant culture is also growing, and at least seven new eateries have opened over the past year, offering a wide variety of cuisine. They include Fratelli’s Restaurant, which opened last month; Balance Amherst, which offers food that can be consumed on site as well as delivery of up to a week’s worth of meals; Himalaya Friends Corner, which serves cuisine from Nepal, India, and Bhutan; Taste of Persia; Malek Shawarma Mediterranean Café; along with two new restaurants, Lili’s and Ichiban, that recently signed leases but hadn’t opened when BusinessWest went to press.

Bockelman said there are numerous other well-known places to eat and drink, such as Cushman’s Market in North Amherst, which is tucked alongside railroad tracks; the Moan and Dove in South Amherst, an iconic bar that was voted one of the best beer bars in the country; Mission Cantina, also in South Amherst. which serves Mexican food; and the Hangar Pub & Grill on University Drive, which was named one of the Best College Bars by BuzzFeed last October.

This summer, six new bike-share stations will be built and paid for by a federal grant from the Department of Transportation that was given to Amherst, Northampton, Springfield, Holyoke, and South Hadley. The stations will be located beside bus stops, and the first hour of use will be free.

Officials are happy with the progress that is taking place. “Demand for development can create tension within a community when people want to preserve its historic nature, so we’ll be doing a balancing act as we move into the future. It’s a tension point to figure out where the line is, but the town works really hard to do that; our volunteer boards grapple with many difficult decisions,” Bockelman said.

So far, they have met with success: Amherst has continued to grow in a way that attracts developers and new businesses while maintaining its identity as a college town with a plethora of recreational and cultural opportunities. 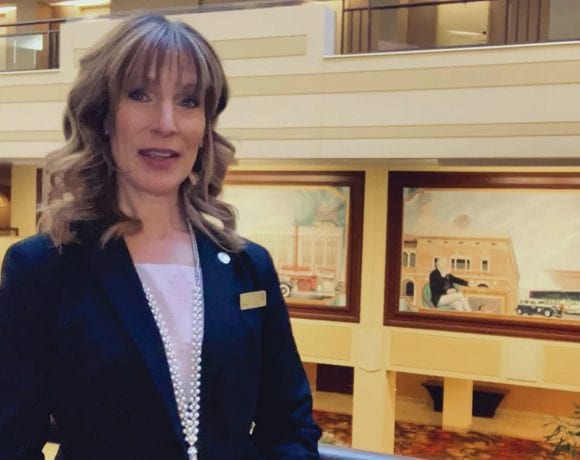