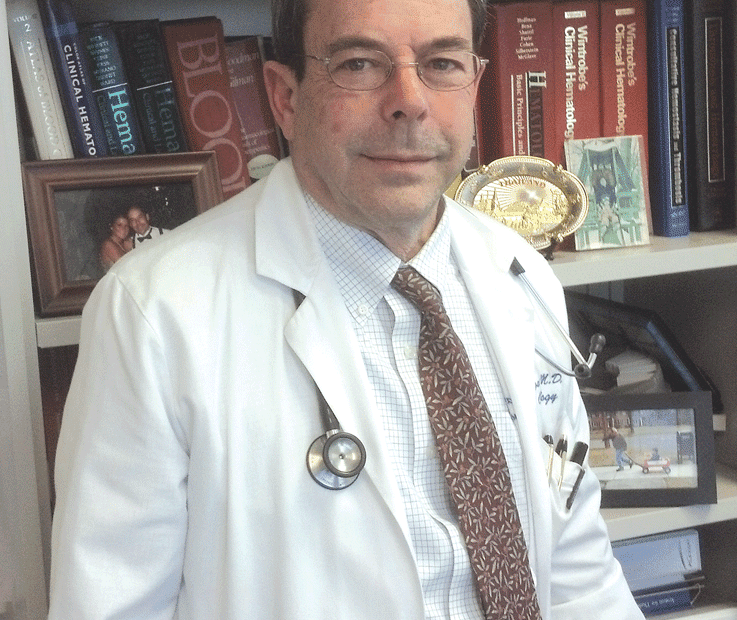 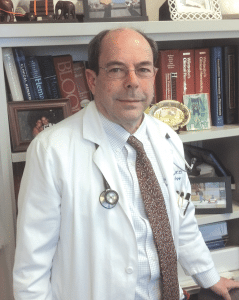 Dr. Richard Steingart says hemophiliacs have a shorter average lifespan than those without the disorder, but more meticulous care these days has allowed many to live normal, often-lengthy lives.

Mark Zatyrka’s passion is in his blood — blood that won’t clot.
He’s one of about 20,000 Americans living with hemophilia, a rare condition that prevents blood from clotting normally. But he’s turned his challenges into a gratifying career as vice president of American Homecare Federation, a company that provides services to patients with blood disorders. He also educates young people about HIV, which he contracted from a blood transfusion in the 1980s — a decade when AIDS killed many of his friends.
“I have severe hemophilia, so I know the challenges I grew up with, and I have a personal relationship with a lot of our patients,” he said. “I can mentor the younger kids and show them that disease does not need to define them; this disease does not have to hold them back, and they can still create great things with their lives.”
Dr. Richard Steingart, medical director of Adult Hematology at Baystate Medical Center, agrees.
“The average lifespan is definitely less than normal, although we’re finding that, with meticulous care, these people are living longer and longer,” he said. “Every ethnicity can get it — black, white, Hispanic, Pacific islanders, Asian, it doesn’t matter — and the incidence is about the same throughout the world.”
People born with hemophilia have little or no ‘clotting factor,’ which is a protein needed for normal blood clotting. Normally, when blood vessels are injured, clotting factor helps platelets — blood-cell fragments that form in the bone marrow — stick together to plug cuts and breaks on the vessels and stop bleeding.
People with hemophilia A — which accounts for about 90% of all hemophilia — are missing, or have low levels of, what’s known as clotting factor 8. The rest, who have hemophilia B, are missing or have low levels of clotting factor 9. Hemophiliacs ‘infuse’ themselves with pharmaceutical clotting factor; while those with a mild version of the disease may infuse only before an operation, dental visit, or potentially risky activity, many with severe hemophilia must infuse as often as every day, to prevent dangerous internal bleeding.
“A lot of different drug companies make a lot of different factors,” Steingart said, but noted that they can cost upwards of $3,000 every other day.” Home-care companies like Zatyrka’s exist partly to help patients navigate and access insurance. Overseas, however, that cost often becomes a dangerous challenge. “The product is so expensive that it’s much harder to treat in third-world countries.”
In this issue, BusinessWest takes a look at an often-misunderstood blood disorder and how those who struggle with it are able to find some measure of normalcy despite the ever-present danger.

Blood Simple
The hazards of hemophilia are clear; patients may bleed for a longer time than others after an injury, and may also bleed internally, especially in the knees, ankles, and elbows — all of which can cause long-term damage to organs, joints, and tissues. With rare exceptions, hemophilia is a male disease — about one in 5,000 boys are born with it — and it’s usually (but not always) inherited genetically.
“About a third of the cases are spontaneous mutations; that’s not an insignificant amount,” Steingart said. “It can show up even in a family with no history of hemophilia at all.”
The lack of clotting factor in severe hemophiliacs, like Zatyrka, is dramatic; people without hemophilia have factor 8 activity of 100%, while it’s often less than 1% in those with severe hemophilia. So, while a mild hemophiliac might need clotting factor infusions only on rare occasions, like before dental surgery, those with severe hemophilia may be constantly at risk of internal bleeding and joint bleeds, which can lead to arthritis, skeletal deformities, and even an inability to walk.
The disease often first presents in a childhood operation, often circumcision; today, children born in families with a history of hemophilia will typically undergo a screening for clotting factor 8, which can then be infused before they are circumcised. Meanwhile, some babies first present for hemophilia in the form of large bruises or welts incurred simply from rolling around a crib.
Although most hemophiliacs can live a relatively normal life, some activities — contact sports, for example — are typically not recommended. “But I have hemophiliacs who go skiing carefully, and swimming is perfectly fine, although diving is probably not a good idea,” Steingart said. “Obviously they don’t play football, and they’re not allowed to be in law enforcement or go into the Army.”
For lower-contact sports and other activities that pose slight risk, hemophiliacs will typically infuse themselves with clotting factor before the activity, “so they can get banged around and not have bleeding problems,” he noted.
“It’s really important to streamline these people into normal activities,” he was quick to add. “They don’t have learning disabilities, and they’re just as smart as everyone else — in fact, they’re probably smarter because they know how to live with this lifelong chronic illness.
“Sometimes their joints can hurt when they do have a bleed, so there’s concern about pain medications and addiction,” Steingart explained, “but most of them take pain medications for a certain amount of time, then get off of them. They’re not drug-seeking addicts.”
Better management of hemophilia — and thus longer life — has led to some ironic problems, he added, like the onset of heart disease and other conditions that strike older people. “How do you do a stent in a person with a blood disorder, who needs a blood thinner when, in fact, their hemophilia is a blood thinner, and it’s not protective? That’s becoming extremely challenging.”

Sad Chapter
Perhaps the biggest challenge for hemophiliacs in recent decades — and easily the most tragic — was the AIDS epidemic that tripled the death rate of the hemophiliac population during the 1980s due to infected blood transfusions, before the medical community fully understood what was happening.
Zatyrka, who lost many childhood friends during those years, feels fortunate to have a career that resonates so personally with him and that allows him to shape other people’s lives for the better, and he has gradually become a public advocate for hemophilia, HIV, and AIDS issues, partnering with a number of local organizations and regularly speaking to young people.
The hemophilia community “was devastated by HIV and AIDS back in the early ’80s; about 90% of severe hemophiliacs contracted HIV,” he said. “I’m HIV-positive, and I do my best to help educate others in the community.”
That includes his co-founding of the AIDS kNOw More Project, an initiative of the AIDS Foundation of Western Mass. that trains young people to educate their peers about HIV and AIDS, around which there’s plenty of misinformation.
“Unfortunately, a stigma still exists around HIV. That drives me nuts,” he said. “And a lot of the stigma comes from uneducated, unknowledgable people.”
Thankfully, the plasma-derived infusions of clotting factor common in the 1980s have been replaced by genetically engineered products that do not require plasma, which has eliminated the risk of AIDS from a transfusion.
In any case — mild, moderate, or severe — patients simply learn to live with the challenges, Steingart said, adding that, typically, “around age 7 or 8, a child learns how to self-infuse with help of mom or dad.”
There’s no cure for hemophilia — although hepatitis patients who receive liver transplants have often been able to generate enough clotting factor 8 in the new liver to eliminate both the hepatitis and hemophilia — but scientists continue to work on ways to improve current treatments.
An increase in the length of time an infusion is effective would be a major breakthrough; currently, it’s only about 12 hours. “What they’re looking for is a long-lasting factor 8,” Steingart said. “Wouldn’t it be cool if people could take a shot once a month rather than taking it every day?”
Until then, patients manage as they always have. Some of them, like Zatyrka, are doing more, working to change perceptions and help others cope.
“Sometimes I have a hard time labeling what I do,” he told BusinessWest. “Is this work, or is it personal? It just means so much to me.”