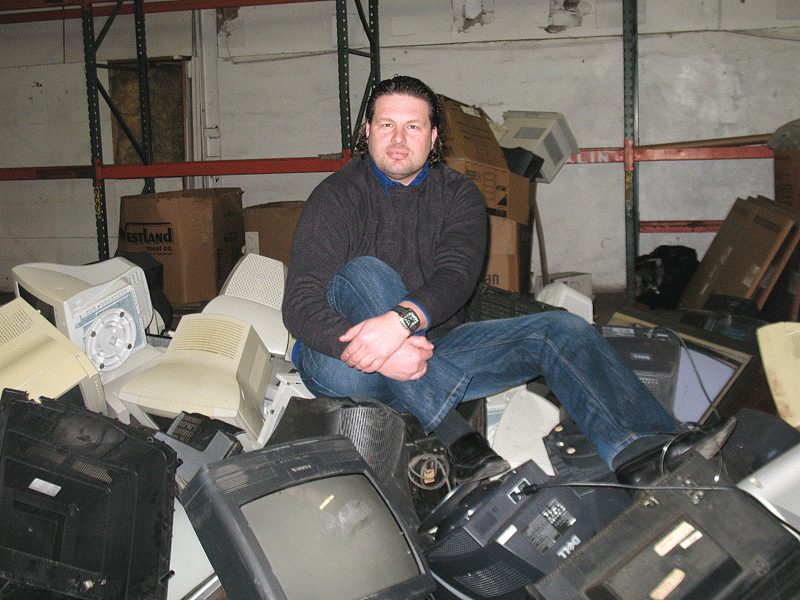 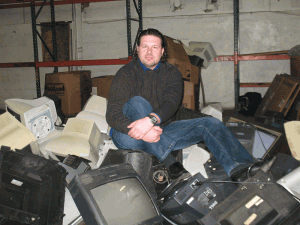 Sam Galiatsatos sits atop three days’ worth of dropoffs waiting to be broken down.

“Look at these dinosaurs,” Sam Galiatsatos said, prodding a hulking television console with his foot. “They come here to die.”
That mound of outdated TVs at Green Monster e-Cycling is one of many piles stacked on the warehouse floor, arrayed on shelves, or deposited in large boxes, all sorted by type: computer monitors, air conditioners, circuit boards, copper wiring, and plastic, metal, and glass pulled from hard drives, TV sets, and other equipment. And much more.
“We are an electronics recycling and processing company,” said Galiatsatos, whose brother, Joe, started the outfit four years ago in his garage in West Hartford, Conn. before moving to a 20,000-square-foot space soon after. Sam operates the just-opened Springfield site on Turnbull Street, the company’s second location — but likely not the last.
“From its inception, Green Monster has been an organic-growth type of company,” he said. “It’s evolved from being a service that only processes the electronic waste from the general population to one that also handles the environmental-health, safety, and sustainability directives that small, mid-sized, and large companies have to abide by.”
It also offers a line of information-technology services to customers, installing and servicing equipment that hasn’t quite reached the dinosaur stage yet. But the company’s considerable early success rests largely in showing people an environmentally friendly way to get rid of the equipment they can no longer use.
“It’s reverse supply-chain logistics,” Galiatsatos said. “We receive manufactured electronic goods of different sorts from different sources, and, typically speaking, we recycle about 80% to 90% of what comes in here. We take apart and sell the scrap metal to companies that use metal, plastics to companies that use plastic, and electronic components to companies that break them down further and extract whatever they want.”
A few pieces that arrive are actually usable with a little refurbishing; for example, an occasional discarded laptop has found a second life in the Green Monster offices. But for the most part, the computers, monitors, TVs, and phones that make up a large percentage of donations indeed comprise a high-tech Jurassic Park.

Waste Not
E-waste, as Galiatsatos calls it, can include just about any device with a battery or a power plug that’s no longer wanted, from computers and printers to televisions and monitors; from VCRs and DVD players to kitchen appliances and power tools. All have the potential to pollute the environment when tossed out, and all contain parts which, on their own, have value.
To create that value, Green Monster accepts dropoffs of electronic and computer equipment from residents free of charge, as well as partnering with businesses and municipalities to collect their outdated items. All electronics are torn down to their basic components, which are then sorted into batches of similar materials and sold to refiners, smelters, and other companies that can use them.
Joe Galiatsatos said the idea for Green Monster sprang from his realization that tons of electronics were being tossed into landfills daily, or else being exported in an unsafe manner. With the tide shifting in business toward more ‘green’ practices, he saw an opportunity in the recycling of such materials.
He was right; from its humble garage beginnings in 2007, the company has at least tripled its work volume in each subsequent year, serving Connecticut municipalities, transfer stations, businesses, and individuals.
Sam Galiatsatos — who learned a lot about electronics and avionics components while in the Air National Guard, stationed in Westfield — had been working in various types of energy consulting when Green Monster started to grow. When the opportunity arose to join the company full-time, he jumped at it, telling BusinessWest that he believes in the green economy and sustainable practices, and loves coming to work every day to live those ideals.
Sustainability comes in different forms, however, and Galiatsatos said he also strives to support the local economy by partnering with area companies in his recycling efforts. “I believe in Springfield,” he said. “And people have greeted me here with open arms.”
The timing for further growth seems right, as companies move toward cloud computing, or Internet-based computing, whereby shared servers provide resources, software, and data to individual computers and other devices.
“That’s a growth opportunity for our business,” he said. “Where a company once needed a room to do its computing, now it can do all that from a terminal at a desk. We can take all their antiquated electronics, break them down, and offer them to different companies.”
Green Monster’s Springfield facility now employs three people, with plans to increase that to 12. Meanwhile, the brothers have their eyes on future expansion, possibly in the Easthampton and Pittsfield areas. But they’re not moving too aggressively, opting instead for what Sam Galiatsatos called “smart growth.”
“That’s our business model; I believe in organic growth,” he said, noting again that Hampden County has been a good fit so far. The firm is gradually adding business clients, including the city of Springfield, Manny’s TV & Appliances, Savers, and also MassMutual, which will be holding simultaneous electronic-waste drives at its Springfield and Enfield locations on Earth Day next month.

Change of Habit
Galiatsatos said Americans toss in the trash out all sorts of things they shouldn’t, from old phones to used batteries, because they’re not thinking of the long-term effects of what winds up in landfills. That’s why he and his brother are trying to educate the public, realizing that what’s good for their business is also simply good stewardship of the earth.
“Don’t just chuck your stuff,” he said, admitting that he, too, used to throw out such items without thought. “If that trash bag is biodegradable, it’s designed to break down in five years, which is great. But then the [electronic] components will break down in 15 years. And they’ll contaminate the environment for 150 years.”
Unless those dinosaurs — or at least their various parts — find new homes.

Is Your Retirement Plan on MARS?