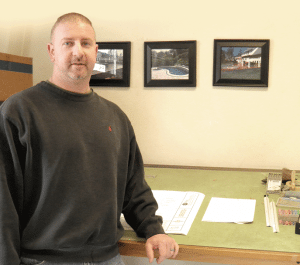 “People said they were tired of winter; they are starved for warm weather and fresh air and wanted to talk about gardening and projects outside,” recalled the wife of Dan Hartley of Hartley Bros. Landscaping Inc. in Westfield, who works in the business.

Dave Graziano of Graziano Gardens in East Longmeadow also believes that people are unusually eager to enjoy the warm weather they hope is soon to come. “The winter seemed so long. There was a lot of snow, and many people have cabin fever,” he said. “They want to get outside, work in their yards, and plan new projects, which may bring an increase in business.”

His brother, Mark Graziano, added that demand for custom-designed outdoor living spaces has increased in recent years. “People are sitting outside, entertaining, and enjoying their property. They’re spending money on their yards instead of moving,” he told BusinessWest.

They’re also looking for creative designs that reflect their taste and personality.

“People don’t want a typical deck or patio anymore — they want something different; they want to make their yards into an entertainment space with a seating area, bar, and firepit,” said Dan Hartley. “Some even have pergolas built so the area looks like an outside living room. They put their big-screen TVs outside and have low-voltage lighting installed around the steps.”

The trend has led to an upswing in the landscape-design business, and local businesses say the spring and summer seasons look promising. In fact, Rick Miller is already booked until June.

“I think we’ll be very busy based on what we have already scheduled and the calls that are coming in,” said the president of R.J.M. Landscaping in Westfield, adding that clients began contacting him in February. “But we’ll be backlogged because of the cold weather. We can’t work until the frost ends.”

Design work requested today ranges from removing old shrubs and replanting new ones to tearing down existing decks and replacing them with new materials; from creating patios made from pavers in a wide range of colors and shapes to transforming entire front and backyards into distinctive spaces. Many people choose to have the work done over several years, but fireplaces and firepits, sitting walls, outdoor kitchens, and unique plantings are in high demand. And although budgets vary, local experts say all jobs share two common denominators: the finished product must be low-maintenance and must be sustainable. 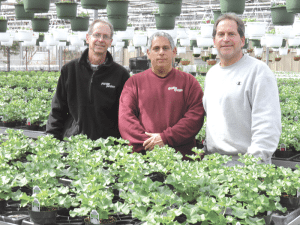 “People don’t have the time to garden and don’t want to be a slave to their yard; they also want to go organic. They don’t want to use chemicals or plant anything that will have an insect problem. They want perfect plants,” said Chris Graziano, adding that new varieties of perennials, shrubs, and ornamental grasses, which require cutting only once a year, make it easy to meet the request.

For this issue and its focus on landscape design, BusinessWest takes a look at what has changed in this industry as well as some local projects that have transformed homeowners’ yards into restful retreats.

Design plans often start with a place to entertain, and Miller said patios have increased in popularity in recent years. “Decking materials have come a long way, but you can do a lot more with natural stone and pavers in terms of flexibility and creativity.”

Mark Graziano added that patios are more permanent than decks, which don’t age well due to harsh New England weather. “People want to spend money on things that will last as long as possible,” he told BusinessWest.

But some homeowners do want to keep their decks. “Sometimes an existing deck has dried, splintered, and aged, and we have to remove the material and rebuild it,” Dave added, noting that they use composite materials that can be cleaned with a hose.

In addition, fencing is being replaced by plants, trees, and shrubs that don’t need to painted or repaired. “We do a lot of buffer plantings to create privacy, using a mix of evergreens, shade and ornamental trees, and flowering shrubs,” he said.

Dan Hartley said tall bushes and trees such as Little King River Birch, which grow to 15 or 20 feet, can be strategically placed to create the look and feel of a natural oasis. “You can create great scenery and cut down the noise from busy roads and glare from headlights with them.” 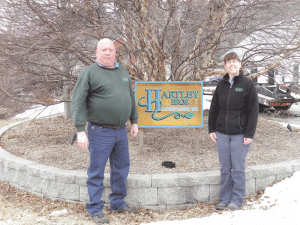 Dan and Cathy Hartley say people are spending money to create attractive landscapes that allow them to relax and entertain in their yards.

Miller said the first step in designing a landscape is to ask the homeowner a series of questions, which include how the space will be used, how many people they expect to entertain, and how often they plan to use the area.

He typically presents the homeowner with several concepts, via blueprints or three-dimensional renderings. He said many clients request outdoor kitchens, which can be as simple as installing a built-in grill, or much more elaborate, with sinks, refrigerators, and storage space set into stonework beneath a pavilion or shingled roof.

The hottest feature, however, is fire. “Last year, every job we did had a firepit,” he noted. “Some clients opt for gas, but most prefer to burn wood. They like to hear it crackle and want to enjoy the sound of an old-fashioned fire.”

Cathy Hartley agreed. “Sitting and staring at flames is mesmerizing and relaxing,” she said.

Dan said many clients also request outdoor fireplaces. “We’ve built them with raised hearths and stone mantels, using concrete blocks or pavers in different colors. We’ve also done inlays with pavers that look like rugs in front of the fireplaces.”

In the past, many people wanted ponds installed in their yards. But Miller said the trend is diminishing. “We’ve removed ponds in the last few years because people are tired of the upkeep and maintenance they require.”

Still, water is soothing, and waterfalls that cascade into a bed of stone or bubble out of rocks have proven to be a viable alternative. “It all comes down to low maintenance. People don’t want to spend their time trimming bushes, weeding, or taking care of their yards,” he reiterated. “Most of what we put in is as low-maintenance as you can get.”

The concept even extends to plantings in front of a home and throughout the rest of the yard. Ornamental grasses in different colors and textures, dedicuous shrubs, evergreens, and a few perennials can create an interesting mix.

“We rarely do formal plantings with tightly trimmed shrubs that have to be constantly trimmed to maintain their shape,” Miller said. “Things have come a long way since the ’70s and ’80s.”

The use of pavers around pools is also more popular than concrete, due to the ease of repair if a pipe breaks, as well as the longevity of the product. “Plus, pavers also allow for more design possibilities, due to the variety of colors, textures, and bandings available,” he said.

Landscape designs sometimes include three-season rooms that lead to a patio. “The room becomes an extension of their home; people can sit outside, barbeque, and enjoy the sun, but if it gets too hot or buggy, they can move to the porch where there is shade and a fan,” Cathy Hartley said. “It offers homeowners the best of both worlds.”

But budgets are the trump card in determining what is done, and many homeowners are taking time to research possibilities before contacting a landscape designer.

“They’re spending their money wisely and are also spending more time thinking about what they want than they did four or five years ago,” Dan Hartley said.

A custom design can change the look of a home. Dan spent two years creating elements for a bungalow with a sloping yard built in the middle of a hay field. A retaining wall, trees, flowers, and perennials made it appear as if it was in the woods, and a native stone wall erected near the road added to the charm. “The wall looked like it had always been there,” he noted, adding that clients often have work done in stages because their ideas continue to evolve.

But although jobs are diverse and work may be plentiful, many landscapers in recent years have had to travel far afield to keep busy. “We go all over New England,” Miller said. “We were recently in the Berkshires, on the Vermont border, and in the eastern part of the state. Our work used to be more local, but in the past two years, we have to go farther to get it.”

Dan Hartley agreed. “We are definitely going farther west,” he said, adding that, since clients are more educated, more time is also required for the planning process.

His business has had its ups and downs in the last few years. “We had times where we were really busy, then would be slow for two weeks. But it leveled out during the past year, and I think this will be a really good year,” he said.

Cathy Hartley concurred. “We have a lot of clients who have already lined up work,” she said.

Chris Graziano said his company had a great fall, with jobs that included some large commercial projects. However, change has also occurred in that arena that involve environmental considerations.

The Grazianos take pride in the fact that one of the brothers is at every job site from start to finish. “But in the past two or three years, we’ve had to work a little harder to maintain the flow of business, and we are traveling farther and expanding our territory,” Mark said.

Hartley Bros. will hold free demonstrations on April 26 that include how to properly install a patio and/or retaining walk, how to plant trees, and how to design container gardens.

But Dan, Cathy, and other landscapers say most homeowners want the work done for them and will line up for it. “People are really looking forward to spring, and there is a project that fits every budget,” Miller said.

“Every house is different, and we like to get creative,” Dave added.

And with a growing array of hardscapes, low-maintenance plants, and new products, the options are endless, making it possible to design and build cozy, sustainable outdoor living spaces where people can relax, entertain, and enjoy the beauty of nature in their own backyards. 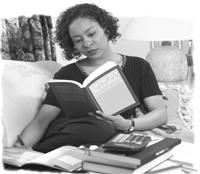 Facts About Retirement Planning for Women