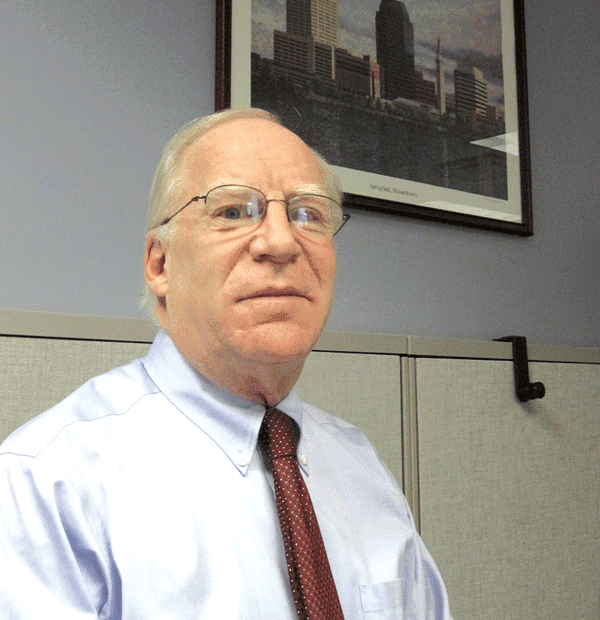 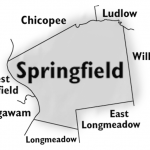 Domenic Sarno has been talking about a potential Springfield casino for a long time. But that’s not all he wants to talk about.
“We’ve handled the casino as a potentially $1 billion economic-development project with a gaming component,” the Springfield mayor said of the dual proposals put forth by MGM Resorts International and Penn National Gaming, “but we’re moving on three or four different other fronts besides the casino.”
Three or four would be a gross understatement. Those fronts range from ongoing tornado recovery to Union Station, which will begin its $78 million transformation to a multi-use transportation hub later this year; from the new data center at the former Technical High School — one of the final pieces of an ongoing revitalization of the State Street corridor — to continued efforts to draw more businesses and foot traffic downtown, among many other efforts. 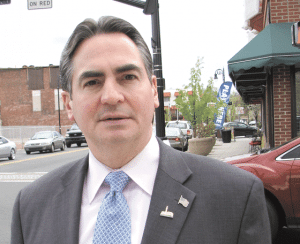 Mayor Domenic Sarno says efforts to locate a casino in the city constitute one of many economic-development related initiatives taking place in Springfield.

“So it’s more than just the casino,” Sarno said, before admitting he certainly welcomes such a huge development and the $15 million to $20 million in property-tax revenue that might accompany it  — not to mention thousands of jobs and, hopefully, opportunities for local businesses to partner with the casino developer, if Springfield does indeed land the project. “Both entities understand that they have to connect to the fabric of the city.”
Jeff Ciuffreda has become a bit weary of the casino issue as well. As executive director of the Affiliated Chambers of Commerce of Greater Springfield, he knew any stand taken by the ACCGS would be controversial with some, “so we supported it with one caveat — that it not distract from ongoing economic development.”
After all, an $800 million casino does change the equation downtown, and is not exactly the sort of project the City of Homes is accustomed to. Ciuffreda wants assurances that MGM or Penn National won’t ignore the small businesses that are in many ways the city’s backbone.
“We’ve had discussions with both developers, and there seems to be genuine interest in looking at ways for spinoffs of the casino to really benefit small and medium-sized businesses,” he said, noting that a casino is expected to purchase some $50 million to $55 million in goods and services annually.
“We’ve been trying to encourage them to be cognizant of the fact that they’re moving to an area with a lot of small to medium-sized businesses that may not be able to produce the quantity of goods and services they’re looking for, but maybe they can carve out a portion of those goods and services.”
So, the casino is certainly the elephant in the room when planning for the future. But while it’s not possible to move every project forward until the gaming question is settled, city leaders say, there is plenty more going on in Springfield, a community they insist is on the rise — no matter what the Mass. Gaming Commission decides later this year.

City on the Move
When they sat down with BusinessWest, Sarno and Kevin Kennedy, the city’s chief development officer, enthusiastically ran through a deep list of recent and ongoing economic-development initiatives.
Take Union Station, for example. Sarno cited the impact of other Union Station projects undertaken in various cities, from New Haven, Conn. to Washington, D.C. “In D.C., it was a decrepit, crime-riddled, drug-infested area, but when Union Station was done, it changed the whole thing. It’s not only about transportation; it’s an economic catalyst.” 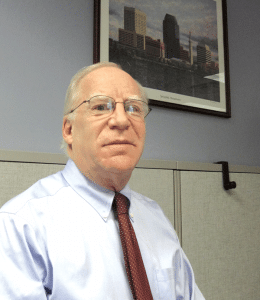 ACCGS Executive Director Jeff Ciuffreda says many downtown businesses no longer have the “bunker mentality” that prevailed after the recession.

Kennedy also mentioned the interest UMass Amherst has shown in a downtown location. “That is real. We’re having discussions with them, and we’re expecting they will come to fruition, and a year from this fall, it’ll be the UMass Springfield campus.” That’s an important development, he said, “because bringing students downtown brings vibrancy; it creates excitement. It helps with the restaurants and all the retail along Main Street.”
And with the completion of the data center and a recently announced, $25 million redevelopment of the Indian Motorcycle property in Mason Square — a project being undertaken by American International College and First Resource Development Co. — the State Street corridor continues its impressive momentum. “AIC is really happy,” Kennedy said. “MassMutual is happy. The residents of Mason Square are happy.”
Ciuffreda noted several other recent successes, from new life in the former federal building on Main Street to the downtown relocations by the likes of Thing5, Accountable Care Associates, Cambridge College, and other businesses, to small but noticeable aesthetic improvements, such as James Kitchen’s art installations.
Then there’s the just-announced lighting project being undertaken along some of the city’s main thoroughfares: on Main Street in the downtown club district, on North Main Street in the North End, and along Sumner Avenue near the entrance to Forest Park.
The city has teamed up with Western Mass. Electric Co. to replace outdated light fixtures in those areas with lights that are both brighter and more energy-efficient, with an eye on expanding the effort to other neighborhoods.
Particularly in the historic neighborhoods, Kennedy said, the old, decorative light fixtures have a place, but the switch “saves us money and saves WMECo money, and citizens benefit because we’re changing the whole image of downtown safety and security; by improving the lighting, people will have more confidence to come downtown, and they’ll feel more safe and secure.”
Ciuffreda understands the reason for the change, noting that chamber members are being asked for their feedback on the new lights being tested. “I’ve heard people say, ‘I went to a Falcons game, and for the first time in a long time, I felt safe after I left, but then I walked down the street, and it was kind of dark.’”
“We want people to tell us what they think,” Kennedy said. “What we’re trying to do downtown is change the whole lighting arrangement, from decorative lighting to better illumination. In addition, we’ll soon be announcing a new security arrangement downtown so, generally, when someone gets out of work downtown, they’ll see a cop. When they go to an event at the MassMutual Center or CityStage, they’ll see a cop.”
“When people feel safe, they’re more likely to visit, and more bodies on the street means more vibrancy,” added Sarno, noting that further economic development will be limited unless the city addresses the safety issue — both perception and reality. “We’ve thought this out very well, and we’re trying to connect all the pieces of the puzzle. There’s a lot of work that might not seem very sexy up front, but behind the scenes, it’s helping us do the more sexy things.”

Still Standing
Impressively, Sarno noted, all this is taking place in the wake of a devastating tornado that ripped through several city neighborhoods in June 2011. A strategic disaster-recovery plan has been in the works for almost two years, but now federal money is beginning to arrive — including $21.9 million from the Department of Housing and Urban Development and $1.3 million from the Federal Emergency Management Agency — to put the plan into action.
“We were dealing with the disaster 24/7 for three months. And in the first two weeks, we started to think about how this could be an opportunity to redefine the city,” Sarno said. “That’s when we started piecing together DevelopSpringfield; we wanted a vision not only for the affected area, but a chance to redefine the whole city — to highlight strong areas and make areas in need better. Now that the money is starting to come in, we’re seeing fruit from these projects.
“It’s tough enough for an urban center as it is, and we were hit with one disaster after another,” he said of the freak weather events of 2011 and the natural-gas explosion downtown last fall. “A lot of people thought the tornado was a haymaker, the knockout. But the exact opposite happened. After seeing our resiliency, people are taking a second look at Springfield. We’re not saying we don’t have urban challenges; we do, and we’ll conquer them. But people have their eyes on the city.”
Kennedy agreed. “Confidence is back in Springfield,” he said, adding that progress has been aided by the “reliable and predictable way of going about our business. We developed a strategy and stuck to that strategy, as opposed to being all over the lot.”
Yet, Ciuffreda was quick to add that some projects — from the next phase in a downtown parking study to a UMass Springfield campus — simply can’t move forward until the site of the casino is known.
“My feeling is, [UMass] wants to do something that won’t compete with the other colleges and universities, but until the casino is sited, it makes it difficult for them to figure out where they want to be,” he said. “The parking, the lighting, the UMass presence — they’re all being overshadowed. Now, you can’t rush an $800 million development, but these other things can’t wait in the wings forever.”
That said, “the mayor and Kevin (Kennedy) have an eye on all of this and haven’t been distracted by casinos,” Ciuffreda was quick to add. “All these other projects seem to be getting their due attention.”
Even the 2009 decision to increase the mayoral term from two years to four has had an impact on development, Kennedy said, because it means the mayor no longer has to spend more than half his term in campaign mode. “It gives you the time to sketch out the vision and, more important, implement and execute that vision. That’s what we’re in the midst of doing now.”
Added Sarno, “you’ll always get naysayers asking ‘why are you making that move?’ But it’s like a chess game. Each move sets up another move, although it might not always be obvious.”

Better Days
From the chamber’s perspective, Ciuffreda said, Springfield is on the rebound from the Great Recession.
“Starting three years ago, we could see some small and mid-sized companies leaving the chamber, for mostly economic reasons,” he said. “We haven’t seen that in the last year or so; our numbers show a firming up of the economy. We’re seeing more participation in our programs. Folks aren’t in as much of a bunker mentality downtown — they’re coming out, they’re moving forward. I think there’s some momentum there.”
How a potential casino impacts that progress, both positively and negatively, remains to be seen.
“I can’t lie to you; there will be small businesses that will be hurt if Springfield wins the gaming license,” he noted. “But our hope is that, through employment and other opportunities, we can minimize those losses. Our real concentration is on maximizing the upside, the spinoff that will occur in these other areas. On balance, the chamber decided there was more good than bad, more upside than downside. That’s why we’re supportive of it.”
Meanwhile, Kennedy said, it’s business as usual on the economic-development front, and city leaders aren’t about to sit around waiting for the Gaming Commission’s verdict.
“Everyone knew the downtown was a problem, and we had to do our homework and spadework before we could fix it,” he told BusinessWest. “Even without the casino, if you add up Union Station, Indian Motorcycle, different road projects, the new schools — those are real, and we’ll see more things happening over the next two years. So we are working really hard to make sure we are not casino-centric, because we may not get the casino.”