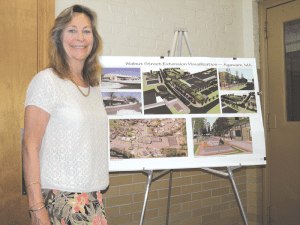 Mayor Richard Cohen created what he calls a “dream plan” to revitalize the Walnut Street Extension area years ago, and says it has taken tremendous patience and untold hours of dedicated work to bring it to fruition.

The idea is to make the area into an attractive, walkable, downtown-style location with venues that enhance quality of life for residents of the city, he told BusinessWest, adding that the plan received a major boost early this month when city councilors approved a mixed-use business C zoning change for the area. It relaxes dimensional requirements for buildings and is aimed at encouraging the development of new restaurants, cafés, family-oriented enterprises, and second-story residences.

“Agawam is a great place to live, work, and play, and we want to maintain those attributes and continue to develop them. Our goal is to create an environment that is friendly and can be used by families for entertainment. We don’t have a downtown, and need a place where people can walk and have things to do,” said Cohen, adding that the Walnut Street Extension area had been declining for years, and prior to the zone change, there was no incentive for business owners to improve their property because they were uncertain as to whether they could realize a return on their investments.

Deborah Dachos, director of Planning and Community Development, agreed, and said the new zoning offers an ideal setting for growth and is in line with what business owners and residents want in that section of the city. “The zoning change has finally passed,” she said. “It involved a concerted effort to work with businesses to make the area more user-friendly and less restrictive. We worked hard on the plan, which includes the old Food Mart site and former Ames store building.”

She explained that the downturn in this commercial area began when Food Mart and Ames moved out, leaving both structures in the Springfield Street shopping plaza vacant. The decline was exacerbated after a fire led to the closing of the former Games and Lanes building, which housed a bowling alley. “The Walnut Street commercial area was developed in the ’50s, and the decline occurred over a 10-year period. But the mayor and I made a concerted effort to revitalize the area 12 years ago.”

Progress began after the city sought and gained acceptance from the state to designate the location as an exceptional-opportunity area. The designation made tax-increment financing possible, allowing the city and businesses to agree on a property-tax exemption for up to 20 years, based on a percentage of value added through new construction or significant improvements.

In 2010, city officials also completed an economic-development plan that made the Walnut Street Extension neighborhood a priority. It included the provision for mixed-use zoning, which was refuted by the city council last December before being passed this month.

Parking has been problematic for business owners in the district, but that obstacle is being addressed. The Pioneer Valley Planning Commission accepted the city’s application for district technical assistance, and has plans to study parking and pedestrian issues in the area. “Their report will provide the town with the information we need to seek a MassWorks grant of up to $1 million to address the deficits and construct new parking areas. It’s important because business owners have complained that there is inadequate parking,” Dachos said, adding that the study was contingent on getting mixed-use zoning passed.

New venues for family entertainment have begun to crop up in the Walnut Extension Street area in the past few years, and several new businesses are expected to open in the future.

Revitalization began when Dave’s Pet Food City purchased the former Ames building about six years ago. The company used about half of the space and put the remainder up for lease.

Stick Time Sports Inc. opened its doors last fall in a portion of the building, offering training for hockey, field hockey, and lacrosse in its complex, which includes two 45-by-85-foot synthetic turf fields, a strength and conditioning space, a fully equipped pro shop, and a birthday party/conference room for special events.

And a new YMCA is scheduled to open in early August in the old Food Mart building. It is under construction, and will be called the Agawam YMCA Wellness and Program Family Center.

“It will offer everything included in a traditional YMCA, with the exception of a swimming pool and basketball gym,” said  Kristine Allard, chief operating officer for the YMCA of Greater Springfield. “There will be a fitness center, café, community space, group exercise area, and technical center, as well as a child-development center with projects and activities for children whose parents are exercising or participating in other programs.”

The facility is being built in response to need expressed by residents and city leaders, and will be the first YMCA in New England without a pool and gym. “It’s a groundbreaking concept, and we are extremely excited about it; it will be beautiful and functional and will contribute to the community,” Allard said. 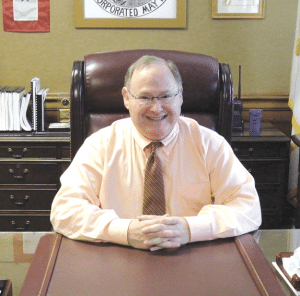 The site was chosen several years ago, but it took time to raise enough money to proceed with construction. Allard said $300,000 has been raised for that purpose, but $100,000 is still needed to cover the first year of operating expenses, and fund-raising efforts include soliciting new memberships as well as donations.

Another major improvement is also anticipated. The former Games and Lanes site at 346-350 Walnut St. Extension, which has been an abandoned eyesore for 13 years, may soon be sold and revitalized, thanks in part to an environmental study completed in March that provided the city with a cost-assessment and remediation plan for the 2.3-acre brownfields site. The building on the property was occupied by Standard Uniform Corp. from 1969 through the late ’80s, and when an underground gasoline tank was removed in 1989, contamination was discovered.

“In the past, developers were reluctant to purchase the property because the cost of cleaning it up was unknown,” Dachos said.  “The current owner invested $1 million to do the work, but it was not enough. So in 2012, the city applied for a MassDevelopment grant so prospective buyers would have a better understanding of what needed to be done.”

She told BusinessWest that four parties recently expressed interest in the site, and a Ware couple is pursuing a purchase-and-sale agreement. “They want to make the property into a family entertainment center with a racing theme,” she said, adding that go-kart racing would not have been possible before the mixed-use ordinance passed because the site had been zoned for industrial use.

“Their plan is consistent with other new businesses in the shopping center, which include a tae kwon do training center that opened about 18 months ago and a new Napa Auto Parts store,” Dachos said. “The theme of the Walnut Street Extension area has become family-oriented entertainment and services. A new Dollar General store opened a few months ago at 53 Springfield St., and a Salvation Army Family Store opened about two years ago at 65 Springfield St.”

Cohen said fulfilling his dream plan has taken years of effort, but the vision is finally being realized.

“We have been diligent in pursuing our goal of making this area into a beautiful place for families to enjoy, and we are finally going to be able to see the fruits of our labor,” he explained. “Many people become critical when they see empty buildings, but they don’t know the passion and time it takes to get something to happen. Now that the economy is turning around, there is money for mixed-use zoning from state, federal, and private investors, and a private-public partnership is beginning to take shape.”

Infrastructure improvements that will advance the plan include widening the Morgan Sullivan Bridge from four lanes to five. The bridge connects West Springfield and Agawam, and MassHighway has deemed it structurally and functionally deficient. It approved $12.3 million for bridge reconstruction and remediation of three intersections neighboring the span.

“The bridge is the gateway into the Walnut Street shopping-center area,” Cohen said.

Dachos added that the state has assigned the project to a consultant and it is in the design stage, with construction expected to begin in the winter of 2016-17.

The mayor said these improvements are needed to promote the area and give new businesses the easy commuter access they need to thrive. “There were a lot of pieces of the puzzle that had to be put into place. But everything is finally coming together.”

Other changes are also being made to enhance quality of life in the city. Agawam’s 50-acre School Street Park will undergo a $2 million expansion this year that will include a splash park, disk golf, a volleyball area, a picnic area, walking trails, and a band shell, where open-air concerts can be held during the summer. And a 1.7-mile stretch is being added to the 3.7-mile Connecticut River Walk and Bike Path, which will make the park accessible from the pathway that runs from Springfield into Agawam.

The city will also begin construction on a new dog park this summer, said Cohen, adding that funding for that project comes from a variety of sources. The city received a $237,000 grant from the Stanton Foundation, which was supplemented by $14,000 in Community Preservation Funds and another $10,000 raised by the Agawam Dog Owner’s Group.

“There are a lot of nice things going on here,” the mayor said, noting that Agawam was designated the second-safest city in the Commonwealth and the 11th-safest in the U.S. in January, based on data from police reports.

Cohen is happy the City Council voted in favor of mixed-use zoning in the Walnut Street Extension area, and says the future outlook is bright.

“Agawam is a beautiful place, and our convenient location, affordable land and buildings, and low tax rate allow us to build good lives for ourselves and our children. We are proud that this is a safe community with family values and great schools, and the year 2014 bodes very well for Agawam residents,” he said.

“We have learned to be patient and never give up,” the mayor added, “and I hope our dream and vision for the Walnut Street Extension will become a reality that the community will be proud of in the near future.”