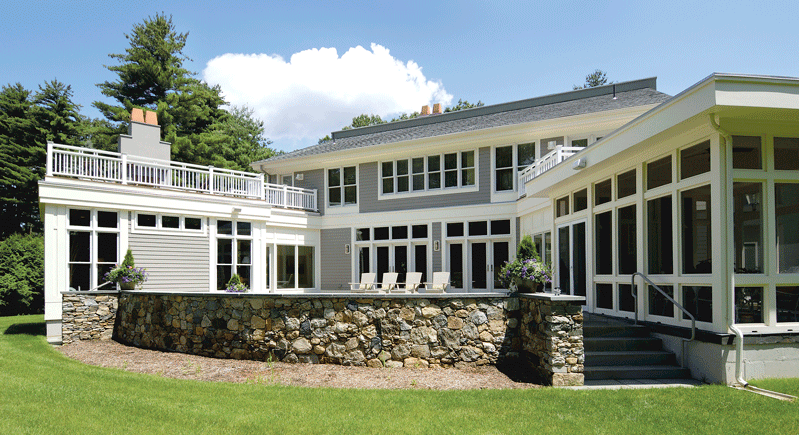 An example of Laplante Construction’s work creating both indoor and outdoor spaces.

When it comes to custom homes, trends come and go, but buyers are always looking for the next big thing — or, to be more accurate, the next not-so-big thing, as one of those trends favors downsizing in favor of easier maintenance and more energy-efficient touches. But high-end homebuyers aren’t shorting themselves on the interior; they still want the best floors, trims, and technology money can buy. And many are turning to Laplante Construction to get the job done.

Ray and Bill Laplante both grew up around the construction business, so it’s not surprising they’ve made a name among the region’s top luxury home builders.

“My dad was a builder, and my older brother was a builder,” said Ray Laplante, who launched East Longmeadow-based R.E. Laplante Construction — since shortened to Laplante Construction — in the early 1970s. “I started out doing a lot of work for them, and after a few years, there wasn’t enough for me, so I went out on my own, doing remodeling and framing and building.”

At the time, duplexes were in vogue in Springfield, and he cut his teeth there, but soon started building custom homes in Longmeadow, Wilbraham, East Longmeadow, and surrounding towns. “Business just took off from there,” he said, and soon he was developing entire subdivisions of high-end residences in those communities.

His son, Bill, grew up in the business too, helping on job sites when he was only 13 years old.

“I would clean out houses, do final cleanings upon completion of houses,” he told BusinessWest. “Then I started in the framing crew, working as a mason tender and doing some finish work. I basically worked through all the way through high school and college, through the summer breaks and vacations.”

He graduated from Trinity College in 1992 with a degree in economics, but a few days after graduation, he was back out on job sites, where he worked for about five years, framing houses and performing myriad other tasks. But, though the experience was invaluable, his heart wasn’t in the field.

“So I started working in the office,” he said, “in project management and then in financial management and sales and marketing, touching virtually all aspects of contruction and understanding how everything goes together — all facets of building.” 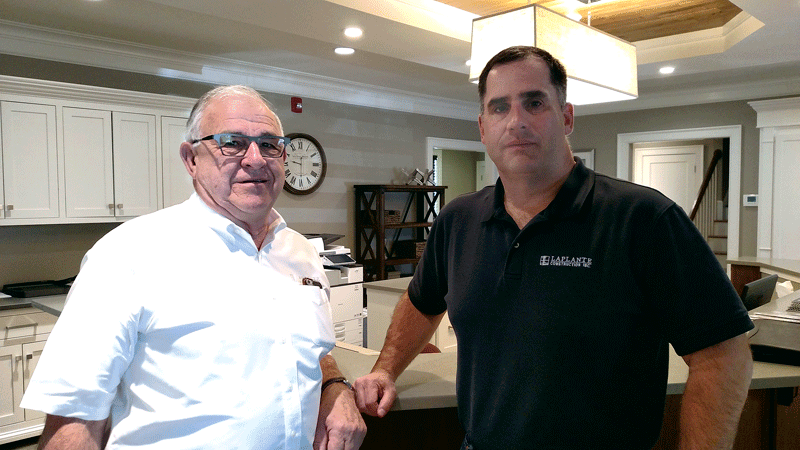 That’s the part of the business he enjoyed most, Bill said — working with clients on the big picture, and shepherding their vision to reality.

“Growing up, I always liked the idea of seeing something built,” he continued, “but I knew pretty early on, after getting out of college, that I didn’t want to stay in the field; I wanted to work with people, helping design and build what is, in many cases, their largest investment: a new home. That’s really what I’ve enjoyed. My passion is in working with the people and selling our services.”

Today, Bill Laplante serves as the company’s president, working alongside its founder to bring those visions to life — including, in 2014, a replica of Thomas Jefferson’s famed Monticello estate in Somers, Conn.

But luxury homes are only one staple of this family business, as it expands its reach in commercial construction as well, delivering a range of building and remodeling services with the diversity to weather economic cycles and record continued growth.

In fact, Ray said, Laplante takes on many different types of jobs, from single bathroom remodels up to large commercial buildings. “And every once in a while, you get a Monticello thrown in there.”

That’s not quite true, of course, as both he and Bill acknowledged that Monticello Somers, built at the behest of Friendly’s co-founder S. Prestley Blake, was a once-in-a-generation project. Ray and Bill Laplante designed the project themselves based on copious research into the original Virginia estate, creating a ‘modernized replica’ that’s historically accurate in the façade, yet decked out in 21st-century amenities inside.

“It was extremely interesting trying to recreate a building like that,” Bill said. “One of the most challenging aspects was trying to create a modernized interior within a very old exterior. And there were code issues that didn’t exist in the original Monticello.”

To be sure, custom finishes, modern touches, and code compliance have long been facets of Laplante Construction’s work building and renovating high-end homes in the Greater Springfield region. But, contrary to a Monticello-scale project, Bill said the trend in luxury homes today is moving away from massive floor plans and toward spaces that are smaller, but still pack all the bells and whistles. 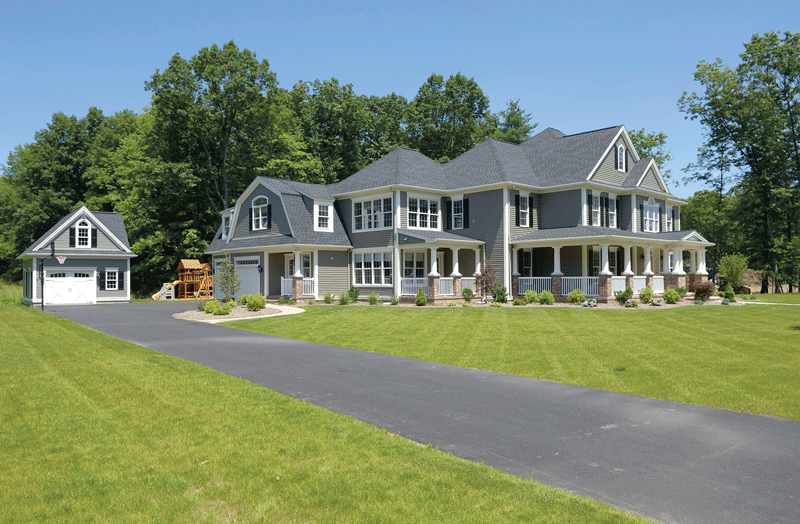 While many homeowners are looking to downsize, Bill Laplante says, the company still puts up plenty of large homes.

“We’re seeing people generally downsize. There has been an increased demand for single-family living, low maintenance, and high energy efficiency. Many people are selling their 4,000-square-foot, two-story, inefficient colonial and want a 2,500-square-foot, very well-appointed, single-family house that’s very low-maintenance, which they can shut down and head to Florida over the winter and really reduce their operating expenses.”

He credits a desire for a simpler lifestyle; people are staying home more and enjoying the space they have, but don’t necessarily want to maintain a sprawling estate.

“It’s amazing — 15 years ago, we built one or two ranches. Nowadays, we’re building, six, eight, 10 ranches a year,” he went on. “That’s because of downsizing. Everyone used to want a colonial, but now focus on ranches and other things. It’s becoming desirable to buy those smaller homes and put money into them.”

And they are investing plenty of money into them, he added. “They want all the amenities — granite countertops, expensive finishes, Wolf and Sub-Zero appliances. They want those outdoor spaces, the screen porches, the outdoor kitchens, all very well-appointed.”

That goes for remodeling as well, Bill added, which has long been a critical part of the business — which was fortuitous when the market for custom homes dried up in the years following the financial crash in 2008.

“People weren’t building homes, but they were still trying to renovate their homes,” he noted. “What served us well was, we never abandoned the remodeling. Other builders at the time wouldn’t take on smaller remodeling projects; they were busy with bigger housing projects. We always maintained smaller remodeling jobs. Then, when the new-construction market dried up, we were well-positioned to respond to demand for remodeling as well.”

Those home remodels, which are often aimed at creating a getaway without actually having to get away, often include outdoor elements, particularly features that blur the lines between inside and outside living, Ray noted. “We’re starting to see a lot of outdoor-living projects — carriage houses, pool cabanas, outdoor kitchens, things of that sort.”

These can all carry hefty price tags, but, interestingly, other home costs have come down in recent years, notably whole-home technology — the devices that control heat, cooling, lights, security cameras, and irrigation remotely.

“The old ‘smart house’ was very expensive, but nowadays, with technology and with the iPhones and apps available, virtually every manufacturer has a product or an app that can be controlled on a cell phone from anywhere in the United States,” Bill explained. “That goes for heating, lighting, security cameras, you name it — and people are really embracing that. I mentioned people closing up the house and going down to Florida for the winter; they can check in with their phones, see what the temperature reading is in the house, or turn the lights on and off.” 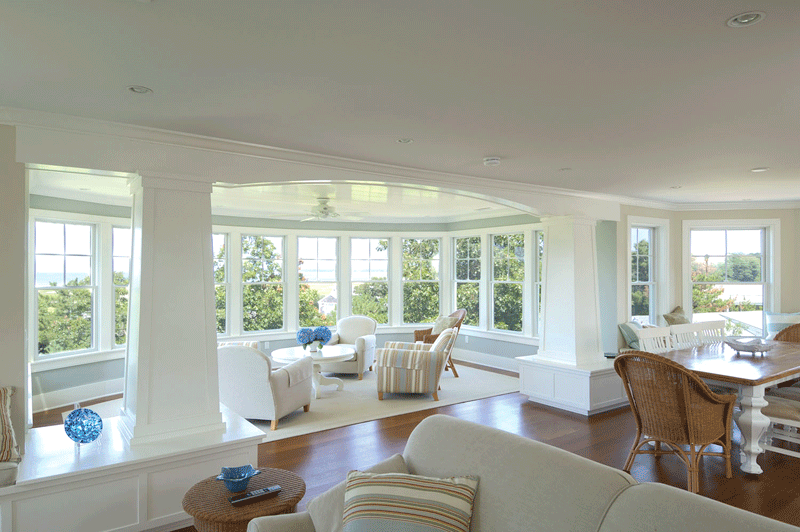 No matter the size of the home, Bill and Ray Laplante say, clients want the interior well-appointed with high-end flooring, tile, trims, and technology.

Homeowners appreciate the cost reductions in that area, as they do the savings they realize from energy-efficient investments.

“Because of the spike in energy costs a few years ago, everyone became much more concerned with energy efficiency,” Bill said. “When people move from 4,000-square-foot homes into smaller, higher-energy-efficiency houses, they’re shocked by the savings in operating costs. We’re doing a lot with spray-foam insulation, energy-efficient windows, air sealing, and super-energy-efficient heating and cooling equipment. Then there are people who want to go even further, into geothermal heating as well as photovoltaic and solar.

“Some of these technologies, there’s not a great payback on, but there are some tax credits available to explore alternative energies,” he added. “And it makes people feel good to reduce their carbon footprint and be energy-conscious.”

Laplante Construction is widely recognized as a custom home builder, but its commercial roster is deep and far-reaching — and has been expanding over the past decade.

“Going back to the ’80s, when my father did a lot of Jiffy Lubes in the area, that type of work has always been there,” Bill said, “but I would say there’s been a resurgence over the past eight to 10 years in commercial. We’ve done a wide range of things, from banks to an eye-care office to a behavioral health clinic to Kringle Candle Country Barn in Bernardston to a school in West Springfield. We have a pretty good diversity of commercial construction.”

That mix of expertise promises to keep Laplante growing as it moves forward with what has been one of its best years in the past decade.

“Maintaining that diversity, and keeping the commercial work going as we do our residential new construction and remodeling, allows us to be flexible and weather turns in one or two sectors,” he told BusinessWest. “With the increase in commercial work, we feel very comfortable and confident moving forward.”