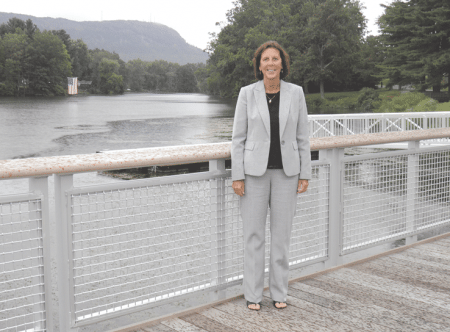 The view from Mayor Karen Cadieux’s Easthampton office is stunning.

Sunshine glints off of the serene waters of the newly opened Nashawannuk Pond Promenade Park, and the boardwalk that spans it is busy.

“The park was planned to become a destination; it’s located right in the heart of our cultural district, and it’s booming,” Cadieux told BusinessWest. “Every day, people stroll along the boardwalk, sit and relax on the benches, do yoga, fish from one of the three handicapped-accesible boat ramps, or launch their boats. Families have been bringing their children to the park … it has something for everyone and offers enjoyment for all walks of life.”

The $945,000 park project is just one of many developments completed over the past year. They range from new housing for people at all income levels to infrastructure and interior improvements in the city’s old mill buildings — which have made those spaces more attractive to businesses — to the continued growth of the creative economy, which is thriving.

In fact, the ribbon-cutting ceremony for Nashawannuck Pond Promenade Park was staged June 13 in conjunction with the start of the second annual Cottage Street Cultural Chaos festival. “Thousands of people attended, and it was wonderful; there were vendor booths as well as music and performers,” said Moe Belliveau, executive director of the Greater Easthampton Chamber of Commerce.

She added that the new boardwalk is beneficial to nearby shops and businesses, which include the downtown area and the thriving Cottage Street Cultural District, which is populated by artists, galleries, gift shops, and restaurants.

“The Promenade project has increased foot traffic downtown, which is wildly important. The businesses there have done well, but now people are on the boardwalk all the time. They walk along eating ice cream from Mount Tom’s on Cottage Street and holding bags with items purchased from nearby stores,” Bellieveau noted, adding that a new restaurant known as Bliss Café, whose menu includes vegetarian and vegan options, opened at 42 Cottage St. last month.

An $18 million development has also been completed across the street from the park. The historic, 125,000-square-foot Dye Works factory, which closed in 2005, has been turned into Cottage Street Apartments. Cadieux said the project involved a complete renovation of the brick structure into 50 affordable-housing units, which were immediately occupied after it opened in May.

“More than 250 people applied, so there is a long waiting list,” she said. In addition, construction on a brand-new, six-building, affordable apartment complex called Parsons Village, which came about thanks to Valley Community Development Corp., had just been finished, and people began moving into the units at the beginning of the month.

“Another very exciting development has taken place across the street from Parsons Village,” Cadieux continued. “The former Parsons Street School that was surplused by the school department in 2013, has been turned into a luxury apartment complex called Parsons Place.”

The building was purchased by developer Kevin Perrier, president of Five Star Building Corp., which served as general contractor for the project, and the city was paid all the back taxes owed on it. “It contains 16 high-end units, and the entire top floor is a penthouse that rents for $3,500 a month,” Cadieux said, adding that every apartment contains stainless-steel appliances, mahogany flooring, tiled bathrooms, 12-foot ceilings, and central air conditioning.

New developments are also brewing in Easthampton’s old mills. This year the city was feted with an award for the Best Tasting Drinking Water in the U.S. by the National Rural Water Assoc. in Washington, D.C., and beer makers are taking advantage of it.

“We have two breweries in the Pleasant Street mills,” said Cadieux. “Abandoned Building Brewery opened last year, and New City Brewery is in the process of opening. In addition, Fort Hill Brewery opened in a new, state-of-the-art building last year.”

For this, the latest installment in its Community Spotlight series, BusinessWest looks at the many types of development taking place in Easthampton, and how this former mill town has evolved into a cultural destination.

The mayor noted repeatedly that Easthampton has been extremely fortunate in many respects. “It’s been an exciting year because there have been constant buildouts and growth. Businesses want to come here because we’re a thriving community,” she told BusinessWest.

But the economic growth is far more than a simple matter of luck; Cadieux and other town officials have worked hard to promote partnerships that encourage and promote growth.

An example of the communiuty’s success is a collaboration between the city and the owners of all five mills on Pleasant Street. It resulted in the Pleasant Street Mills project, which was funded by three major MassWorks grants.

“It started with work by the city that was done for safety reasons, so our fire department could access the back of the building,” Cadieux said, adding that it quickly morphed into a larger project that is now in its final phase.

The goal is to connect three of the revitalized, 19th-century brick mill buildings and create a main public entryway behind them. “The design includes a landscaped parking lot with new lighting and ties the back of the mills to the Manhan Rail Trail and Lower Mill Pond,” the mayor explained.

She added that the city purposely zoned its old mills for mixed use and worked closely with the Pleasant Street owners, who spent a significant amount of money upgrading their interior space. As a result of the magnitude of the project, Eversource (formerly WMECO) upgraded the electric lines going into the buildings.

“It’s something they had not planned to do for 10 years, but they were inspired by the project and the fact that the mill owners invested money to do renovation at the same time,” Cadieux explained.

Belliveau said the three-stage MassWorks project will bring even more vitality to the town. “It’s a storybook partnership and has spurred a lot of private reinvestment by the mill owners, which is key to renting available space,” she noted. “There’s a tremendous amount of energy and synergy in Easthampton, and a lot of growth and renaissance going on.”

The creative-arts community is also growing, and the lobby of the historic Old Town Hall on 43 Main St., which has become a center for Easthampton’s arts organizations, underwent a major renovation that was completed last month.

CitySpace Inc., a nonprofit that maintains the building as a center for the arts, received a $133,000 tourism grant to do the work, and the City Council approved an additional $256,000 of Community Preservation Act funds for the project. “There are new doors, refurbished floors, new lighting that goes up the stairs, and more,” Cadieux said.

An August ribbon cutting for the entranceway was staged during Easthampton’s monthly Artwalk, which has been highly successful and draws people from many communities, said the mayor, adding that the city is also actively seeking grants to renovate the second floor of the building, which would be used to host theater groups and other functions. At present, it is not handicapped-accessible.

She added that the soaring popularity of the town extends to the housing market. “Easthampton has become the place to live, and in some neighborhoods, where the houses are priced in the $200,000 range, they have been selling in two days,” the mayor said, noting that three homes in her neighborhood took deposits for full-price offers recently on the same day. She attributes it to the city’s low tax rate, vibrant downtown, and Easthampton’s new, $40 million high school, which just received a Level I rating.

“The students moved in two years ago, but we just closed out the project this year,” she explained.

Belliveau said the Chamber of Commerce also established new programs and partnerships during the past year, along with new events, such as the day-long 2015 Checkpoint Legislative Summit, which will be held for the first time in Easthampton on Nov. 4 in collaboration with other chambers.

In addition, a partnership was formed with Williston Northampton School, and a chamber breakfast was held there in June featuring a speaker. “It was such a success that it will become an annual event with different speakers,” she told BusinessWest.

The chamber’s first Beach Ball was also held recently at the Oxbow Marina. The summer event was created to mirror the successful winter Snowball, with its silent and live auction, dinner, and dancing, said Belliveau, adding that the city also partnered with the Greater Holyoke Chamber and staged a legislative luncheon with that body in April.

Belliveau told BusinessWest that Easthampton is thriving. “This is a community that really loves who and what it’s become, and it’s an exciting time.”

Cadieux agreed. “We’ve had a lot going on in the past year. We’re vibrant, but we are still growing and want to remain attractive to new businesses.

“There is still space available in the mills, available land zoned for highway business along Route 10, or Northampton Street, and a blighted building on 1 Ferry St. for sale,” the mayor continued. “We’re striving to keep our diversity so there is something for everyone here. It’s the key to our success.” 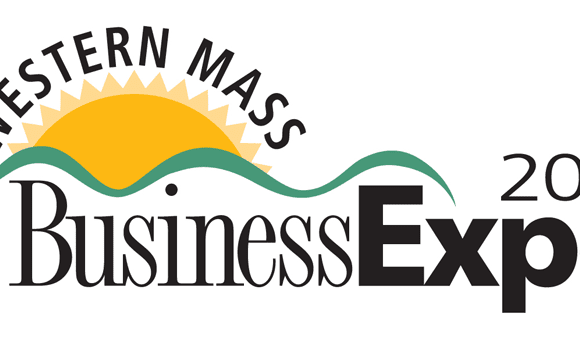 A Matter of Momentum 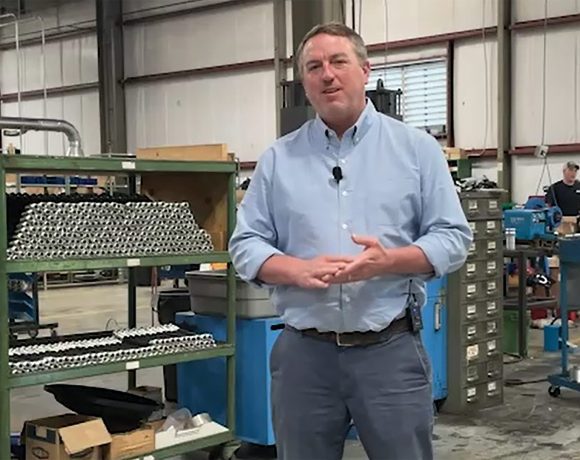