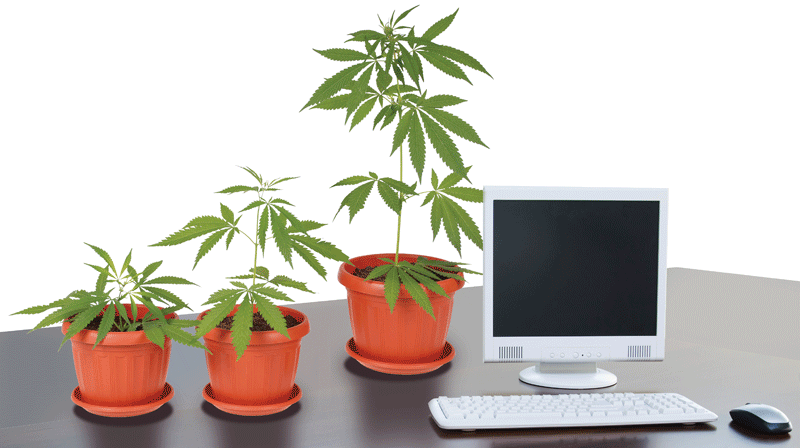 The statute legalizing marijuana for medical purposes in Massachusetts presents a confounding dilemma when comes to the workplace. On one hand, the law states that any person who meets the requirements for medical marijuana may not be penalized or “denied any right or privilege” for such activity. On the other hand, employers aren’t required to accommodate marijuana use in the workplace. But what if an employee is fired for using the drug after hours, then failing a drug test? On issues like that, the statute is frustratingly vague, but cases winding their way through the system may soon provide some clarity.

Advantage Sales and Marketing never wanted to be a test case for medical marijuana, but that’s exactly what the Foxborough company has become.

It likely won’t be the only battleground, either.

The issue began when Cristina Barbuto, who suffers from Crohn’s disease and is prescribed marijuana to deal with painful flareups, applied for a job at Advantage.

“She told them, even before the pre-hire drug screening, that she was going to test positive,” said Timothy Murphy, an attorney with Skoler, Abbott & Presser, P.C. in Springfield, noting that her marijuana use, typically during the evening, was a doctor-directed strategy to deal with her condition.

She was hired. Then fired the next day.

“They brought her on, but when they got the test result, they said they had a zero-tolerance policy, and she had tested positive,” Murphy said. When Barbuto, who is now suing Advantage, reminded the company she had been upfront about her marijuana use, he went on, “they said, ‘sorry, but this is our policy.”

This type of confusion, he explained, is due to what seems to be conflicting language in the statute that legalized marijuana for medical reasons after Massachusetts voters approved it in a November 2012 ballot question.

On one hand, the law states that any person who meets the requirements for medical marijuana — which include suffering from a qualifying medical condition (such as cancer, glaucoma, HIV/AIDS, Crohn’s, Parkinson’s, multiple sclerosis, and others) and being prescribed the drug by a physician — may not be penalized under state law or “denied any right or privilege” for such activity.

On the other hand, nothing in the statute requires employers to accommodate marijuana use in the workplace or requires health-insurance reimbursement for its use.

The grey area — what about employees who use medical marijuana at home, then come to work the next day? — is proving to be vexing for employers worried about crafting drug-use policies that protect their rights under the law. Because the law, so far, is largely silent on the matter.

“When it comes to this language, no one knows what it means,” Murphy said. “A registered user can’t be denied any rights or privileges, and [Advantage] is going to be a test case.”

While the medical-marijuana law says employers don’t have to accept marijuana use in the workplace, “that’s not really the question,” said Karina Schrengohst, an attorney with Royal LLP in Northampton. “The question is whether you can make employee decisions based on marijuana use outside the workplace and whether you need to make a reasonable accommodation.”

Barbuto seems to have some standing based on the federal Americans with Disabilities Act, which prohibits workplace discrimination based on a disability and requires employers to make a “reasonable accommodation” for that employee if it would not pose an “undue hardship” on the operation of the business, as long as the employee can perform the essential functions of the job.

“We have our own state anti-discrimination law which largely tracks the federal ADA,” Murphy said. “Under that law, discrimination against disabled employees is unlawful, and employers can’t take any negative actions against employees because of a disability.”

But Massachusetts employers have rights as well, and medical marijuana isn’t even legal under federal law, and … well, it’s easy to see why confusion reigns right now.

On the wording of the Bay State’s medical-marijuana statute regarding rights and privileges, “does that mean medical-marijuana use is protected, and employers can’t take any adverse action against employees who use it?” Murphy asked. “Nobody is entirely sure.”

However, cases like Barbuto v. Advantage Sales and Marketing and others winding their way through the Massachusetts courts should begin to add clarity to the issue. That clarity, Murphy said, can’t come soon enough.

A Question of Safety

The law does seem clearer, he noted, when the position in question involves issues of safety — say, truck drivers and forklift operators.

“Obviously, it’s an employer’s responsibility to ensure a safe workplace for all employees, and that’s important. The use of marijuana can impact an employee’s job. It’s a legitimate concern for employers … similar to alcohol use.”

Employers have a dilemma, he said. On one hand, Murphy said, “they probably want to be empathetic and understanding to medical marijuana users because they’ve been dealt a bad hand; they’re not in a good place with their health. Most employers tend in that direction, but at the same time, they’ve got to maintain safety for everyone.”

On-the-job impairment, regardless of the cause — whether it’s marijuana, other prescription drugs, alcohol, or illegal narcotics — and workplace safety should be the central piece of any substance-abuse policy, he said.

However, Schrengohst noted, many positions don’t involve issues of safety.

“Often this question comes up when employers are balancing workplace safety against this new law. On the issue of workplace safety, preventing workplace injuries, for people like factory workers and forklift operators, I’m going to advise clients to require drug tests because of a legitimate safety interest,” she told BusinessWest. “But in an office setting, there’s more confusion. Obviously, you don’t want your receptionist, as a face of the business, to be under the influence, but the safety issue is the clearer one.”

And what constitutes ‘under the influence?’ The argument Barbuto makes, Murphy said, is that her nighttime use of marijuana does not affect her daytime performance. “She’s saying, ‘I have this disability, and you have a responsibility to accommodate my situation, as long as I’m not impaired at work.”

In short, he went on, “does an employer in Massachusetts have to accommodate an employee who is a medical-marijuana user? That’s the question.”

It’s a question other states are dealing with as well. In Coats v. Dish Network in Colorado, the plaintiff is a quadriplegic who used medical marijuana outside working hours, a registered user who took the drug in a manner according to the state statute authorizing medical-marijuana use.

Yet, the Colorado Supreme Court upheld his firing earlier this year because marijuana is classified as a schedule 1 drug, illegal under federal law. In other words, he couldn’t be arrested for using medical marijuana, but he could be fired.

“The court said the termination did not violate the employee’s rights. That’s really been the trend throughout the country,” Murphy said, citing two California cases: James v. City of Costa Mesa, in which the U.S. Court of Appeals for the Ninth Circuit held that the ADA doesn’t offer job protections for medical marijuana, and Ross vs. RagingWire Telecommunications, which held that the state’s medical-marijuana law does not require an employer to accommodate the use of otherwise illegal drugs for chronic back pain.

Those cases date back several years, however, and are no indication of how Massachusetts courts will view similar complaints, Murphy said.

“We need more regulations as well as more guidance through case law,” Schrengohst said. “The cases I’ve looked at in other states inform this, but they’re not binding in Massachusetts. Those cases have ruled in favor of employers, but the bottom line is, our statute and regulations don’t actually address all the issues, so I’m going to deal with it on a case-by-case basis — whether workplace safety is an issue, what the risks are going to be, and how we think a court might look at it. It’s a hard question right now.”

“In the context of workplace safety,” she went on, “employers really struggle to balance a safe workplace with this new legislation that doesn’t provide clear guidance. The explicit statement that you don’t have to accommodate it in the workplace at first seems great, and then it’s not, really.”

That’s partly because of the potential for dishonesty.

“When you drug test someone, it’s not like when you do a breathalyzer when someone is drinking,” she said. “With a positive drug test, everyone is going to say, ‘weeks ago’ or ‘after hours.’ No employee is ever going to say, ‘that was during my shift yesterday.’ I think employers are concerned, and obviously they’re worried that they’re going to be faced with litigation. It’s new, and we don’t know what to expect. It’s a really interesting topic.”

Murphy noted that the medical-marijuana statute makes an effort to protect employers, even if some of the specifics get blurry.

As for drug testing, Schrengohst said companies with well-understood safety concerns are on firmer ground.

“I want to know what the facts of the situation are, what the industry is. If you want to have a drug policy and you want to drug test, why? What are the reasons behind this? Like I said, it’s a lot clearer when you have employees where safety is really important — someone who’s driving or operating equipment, and they have to be focused.”

Meanwhile, Massachusetts also faces the possibility of changing winds on the federal side, a question that vexes many physicians concerned about prescribing patients a drug that is technically illegal.

“Marijuana use remains illegal under federal law, but Obama’s administration has basically said, ‘we have bigger fish to fry, and we’re not going to be enforcing our medical marijuana and drug laws; we’re not going to punish marijuana users,’” Murphy said. “But that could change. There’s obviously going to be a change in the White House. Is the next president going to take a different view that could impact things? Or will the federal law be changed to allow for medical-marijuana use? That’s probably far less likely than state-by-state changes in laws.”

Massachusetts has progressed in this issue like many states, gradually changing its marijuana laws, Murphy noted. In 2008, the law was changed to decriminalize very small amounts of the drug. In 2012, voters ushered in the era of medical marijuana in the Bay State. In 2016, could full legalization follow, as Washington and Colorado have done?

“I expect there to be further efforts next year to liberalize our marijuana laws, and with each legislative step, maybe the picture gets clearer for employers,” Murphy said. “Advocates have tried to get the Legislature to pass it, but there doesn’t seem to be much appetite in the Legislature to do that. And, often, when the Legislature won’t act on things, people feel, ‘well, we’ve got no choice but to bring it to the voters.’”

Which would lay a whole new set of questions at the feet of employers already struggling to balance their employees’ rights and privileges with their own. 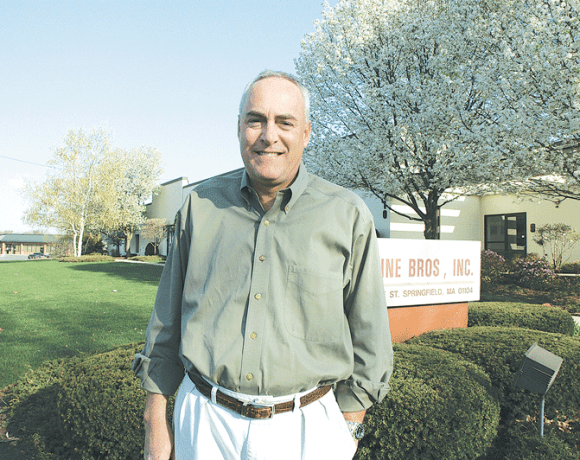