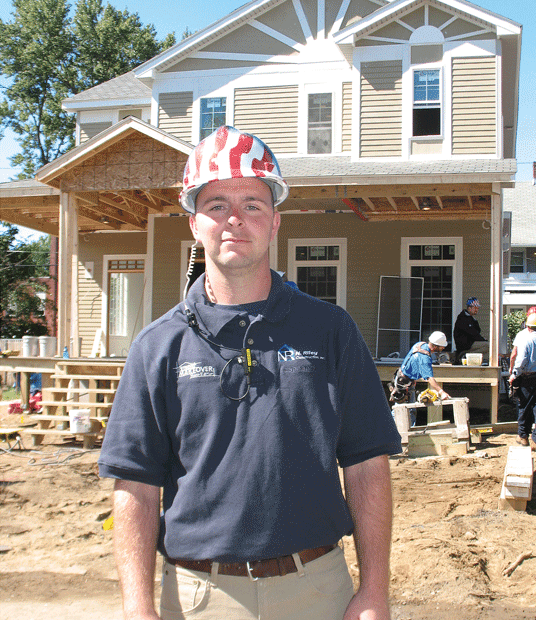 Nick Riley Builds His First House — in One Week 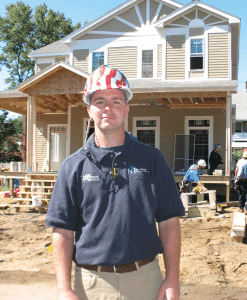 Nick Riley launched his construction company about five years ago, focusing on residential remodels but eager to move into total home builds. He’s not likely to forget the first house he finished from the ground up, because he — and a large crew of volunteer builders and tradespeople — managed to complete it in one week. Riley said the opportunity to tear down and rebuild a house for ABC’s Extreme Makeover: Home Edition is one he’s glad he didn’t pass up — not only for the experience, but for the chance to impact the lives of a very deserving family.

Kate Riley said her husband had a few goals when he planned his career — “to have his own business, to have his name get big, and to build houses. This is his first house.”
She — along with several other Riley family members and dozens of area builders and tradespeople, all volunteering their time — stood on Springfield’s Northampton Avenue, absorbing what had happened in the first few days since Ty Pennington and his team of designers from ABC’s Extreme Makeover: Home Edition knocked on the door of Sirdeaner Walker and informed her she would have a new house by the following week.
“The Extreme Makeover producer contacted me about four weeks before we started the project,” said Riley, president of N. Riley Construction in Chicopee, noting that he was recommended by the Home Builders Assoc. of Western Mass. and other contractors. “I ended up meeting with them the day after. I sat down and spoke with them, and they told me the story of this family.
“That’s when I made my decision,” he continued. “Being able to do this for this family … you never get a chance like this, to be able to do a project like this. It’s not too often that you can say you were able to gather an entire community to help one family.”
Walker is no stranger to the spotlight, but it’s a light she never would have asked for, obviously. Her 11-year-old son, Carl Joseph Walker-Hoover, took his own life in 2009 after being incessantly bullied by peers at the New Leadership Charter School in Springfield.
In the months following the tragedy, Walker became a strong advocate against school bullying, successfully pushing for anti-bullying legislation in Massachusetts, meeting with federal lawmakers and President Obama, and establishing a foundation in her son’s name that raises awareness of the bullying issue and scholarships for area students. 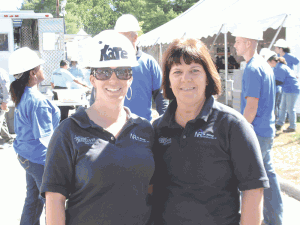 Nick Riley’s wife, Kate, and mother, Lisa, were among many family members pitching in with Extreme Makeover.

Her house, in the Upper Hill neighborhood close to Springfield College, was run-down and riddled with plumbing and electrical issues, according to ABC producers. She lives there with two daughters, a sister, her mother, and her grandmother.
“We started planning about four weeks before the build week,” Riley said. “I approached a couple of good friends of mine in the trades to help me. I also started planning right away as far as gathering materials, manpower, and tradespeople. The Extreme team sent in a couple of project managers to help us do that, but it was ultimately my responsibility to provide the help.
“I had, at the beginning, some very good responses. I had a lot of people who wanted to participate, but didn’t think they could at the time because of how everything has been” with the economy, he told BusinessWest. “So it was a little bit of both: I had people who were very positive about it, saying, ‘yes, we’ll do it,’ and on the other hand some who wanted to do it but couldn’t afford to at the time, or were just too busy.”
Riley’s glad he wasn’t too busy, though, calling the experience one of the most rewarding of his life.

From the Ground Up
Riley corrected his wife’s first-house assertion to a point, noting that he’s currently building a house in Chicopee, and his company, which he launched about five years ago, has done some major home renovations that were very close to whole-home jobs. But this month’s makeover was, indeed, the first house he has completed from the ground up.
The build week itself was every bit as long and intense as viewers of the show might imagine. “On Sunday, we knocked on the door and surprised the family, and on Monday we ripped the house down. On Tuesday we started the foundation,” Riley said.
By midweek, a newly framed house had gone up in its place, followed by repaving of the driveway, complete landscaping of the yard, and of course, all those personal touches the designers are known for. “On Sunday, they brought the furniture in and surprised the family with their new home.”
The days, not surprisingly, were long. “We had 12-hour shifts set up, but the nighttime shifts started to roll into the daytime shifts,” said Riley. “The demolition of the house went really well, and when we dug out the foundation, that went really well,” he recalled. “Framing went pretty well, too. We had framers there for 40 hours, then we started losing them, and it was a challenge to get people back there.”
Inclement weather, always a concern on these one-week builds, wasn’t a factor; temperatures were mild all week, with a little rain passing through on Wednesday, but nothing to slow down the progress, as the house was weathertight by that point. But the occasional unexpected challenge emerged during construction.
For example, “when we started to set the concrete walls, we noticed that we hit a little bit of water. That caused a bit of a problem; we had to set up a pump and pump out the water while we were setting these concrete walls.”
But any problems encountered during the build paled in comparison to the joy the Walker family felt at receiving so much community support. In addition to the army of volunteers and dozens of companies — in the construction trades, home supplies, marketing, and other fields — who lent their time and resources, Walker had more surprises coming at the reveal. Notably, UMass presented her with four-year scholarships — tuition, room, board, and fees at any of the four campuses — for each of her youngest children, now age 7 and 8.
Details about the home’s interior will have to wait until the show airs, at the request of ABC. But Riley said the designers came up with some special touches to match the work he and his crew did on the house itself.
“Seeing people come together to help other people in such a big way, giving up their days and money to help people they don’t even know, it was an amazing experience,” he told BusinessWest. “It just shows how good people are. And just seeing the faces of the family when they moved that bus — it was a once-in-a-lifetime opportunity.”
He said he was also fortunate to meet many people from different businesses he might not otherwise have met, and the participation of his own family members was another personal highlight.
“I asked a couple people in my family to help me out with the planning process, and before I knew it, the whole family was helping out in some way,” particularly helping at the various support tents set up around the neighborhood. “That was rewarding.”
His wife agreed. “This is unbelievable,” Kate said that afternoon midway through the project. “It’s amazing to be able to help a family like this.”

Making a Name
If Riley’s goal was to make a name for his business, he’s well on his way. He started out in the construction business working for his uncle, Andrew Crane, president of A. Crane Construction in Chicopee.
“I ended up leaving because I wanted to start my own company, and things have been great the whole time,” Riley said. “I haven’t had one minute of downtime — it’s been amazing.”
That’s a striking account of success in what has been a decidedly downbeat atmosphere for builders, many of whom have struggled to keep employees busy during the past few years of recession and sluggish recovery. But Riley, most of whose work is residential, has focused largely on home remodels and renovation work, one of the few sectors of construction that has consistently shown some life.
“Right now, because of the recent disasters, we’ve done a lot of insurance repairs, from the ice damage from the winter to work from the tornadoes and the microburst.”
And he’s looking forward to plenty more work as the economy improves — with the experience of that one-week build under his toolbelt.
Still, “we don’t want to grow too big,” he said. “We want to stay a smaller company and keep it personal, make sure we continue to provide a quality product.
“I like the hands-on work of going into someone’s home and putting a smile on the face of the owners,” Riley continued. “There aren’t a lot of other jobs where you can do that, where you can go in make an impact by changing their homes.”
Or, in extreme cases, their lives. 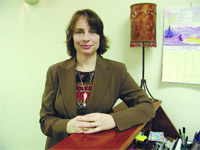