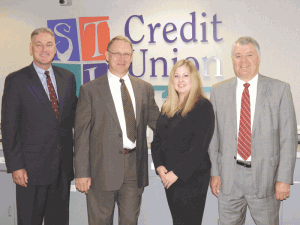 Michael Ostrowski was talking about doing the “right thing.”
But the president and CEO of STCU Credit Union, who took over the helm June 10, wasn’t referring to moral choices. Instead, he was explaining the importance of helping members make sound decisions about how to save, invest, and spend their money based on financial literacy and education, which he says is integral to the institution’s mission.
“People come in here and they think they know what they need,” he said. “But we get the broad picture of where they stand financially and then try to encourage them to do what we think is in their best interests. Credit unions are about people helping people, and we try to make sure each person has the ability to make payments on a loan and is making prudent financial decisions. For example, someone might think they want a home-equity loan because of the low rates, when it may be smarter for them to rewrite their first mortgage. We look at what is best for them, as it’s part of our mission to guide them to make better decisions than they might make on their own.”
STCU was founded during the Great Depression by a group of teachers at Commerce High School in Springfield. It has come a long way since its beginnings in 1929, and today serves about 11,000 members who reside in Hampden, Hampshire, and Franklin counties. Although it is open to the public, the majority of members are educators who come from Springfield Public Schools, American International College, Springfield Technical Community College, Minnechaug Regional High School, and the Massachusetts Career Development Institute, among others.
The credit union has always been a place where members give their all to benefit fellow teachers. In fact, its first full-time manager, Joseph Della-Giustina, left a teaching job he loved at Commerce High School in 1988 and took early retirement because state officials wanted to take the credit union over and gave it a month to find a full-time person to run it.
“I loved to teach, but we were going to lose it; there were many times when we had to stretch our necks out to help people,” said the 88-year-old. “We listened to people’s stories, and during my time there, I saw many who left here with things looking up for them. To this day, I have people who come up to me and thank me for what we did for them.
“We started in one room,” he continued, “and worked on the credit union, and as long as we had people interested and willing to stick their necks out, we got things done.”
For this edition, BusinessWest takes a look back at STCU’s history and the factors that allowed it to grow and remain financially healthy through turbulent times and difficult periods in history.

Pooling Resources
In 1929, 31 teachers at Commerce High School pooled their money to start the Springfield Teacher’s Credit Union. It was housed in Room 125 at the school, and the records were kept in a locked closet. The hours were few: it was only open for about a half-hour each day after school closed.
“But it was a place where teachers could save and borrow during one of the most difficult times in U.S. financial history,” Ostrowski said. “STCU was born out of necessity. These people needed loans, so the founders did what they had to do to fulfill their fellow teachers’ needs. There were a lot of bank failures at the time, and it must have been very difficult for people who were gainfully employed not be able to get a loan or save properly, so this provided a solution to the problem.”
The members pooled their savings, which were recorded at $2,160. After several meetings, on Oct. 5, 1929, the credit union received a certificate of incorporation from the Commissioner of Banks and the Secretary of State.
Anthony Serafino, who was a former teacher at Commerce, was one of the key players in its history, as was Della-Giustina, who joined the credit union in the ’50s when he was teaching business math at the high school.
He remembers people who needed to borrow as little as $150 and were thrilled to have their requests met at STCU. However, he made it a point to tell members that membership was a two-way street and that, in order for the credit union to successfully serve their needs, they needed to support it by borrowing and saving there. He also told them to keep in mind that it was their credit union, which meant they had the opportunity to have a say in how it was run, elect people to the board of directors, and directly influence the products and services that were provided.
“Our sole purpose is to serve our members in good times and bad, and all the benefits of membership derive from that single purpose,” he said in a statement made in 1988.
As the membership grew, it became necessary for the credit union to move its operation out of Commerce High. Della-Giustina said a three-story building was available next door on 427 State St., and they rented it for a time before purchasing it.
The ground floor was a store, and one of the teachers who was handy and lived a distance from Commerce was given free rent in an upstairs unit in exchange for doing the work necessary to make it operational. Della-Giustina and Serafino oversaw a lot of the construction and made sure it continued to meet the needs of the teachers it served.
“But as time went by, we grew, and it became too small,” Della-Giustina said. He had a friend in the construction business who had purchased the piece of property the current main branch stands on at 145 Industry Ave. in Springfield, who was unable to use it for what he wanted and sold it to the credit union at his cost so it could put up its own building.
Ground was broken on Nov. 4, 1988, and the credit union opened its doors on Aug. 7 that year. By that time, STCU offered a wide array of products and services, but as its new manager, Della-Guistina had to petition city officials to allow direct payroll deposits and deductions for members, which he successfully obtained.
The credit union has continued to expand since that time and opened a branch in the Westfield Shoppes in 2006. Ostrowski said the name was changed about 10 years ago from Springfield Teacher’s Credit Union to STCU as it hoped to attract more members from  the general public and didn’t want people to think it was only for teachers.

Bright Future
Ostrowski, who has spent his life in banking in the Greater Springfield area, said he’s excited to be at the helm of STCU. He knows what it’s like to struggle, as he worked his way through pre-med school with a night job before a chance encounter led him to switch career paths. He has handled mortgage banking at Boston Pioneer Financial Cooperative Bank, started the residential mortgage department at Multibank National Bank in Springfield, and was a commercial lender at Ludlow Savings Bank, vice president and chief lending officer at Freedom Credit Union in Springfield, and vice president and senior lender at Barre Savings Bank before coming to STCU.
He likes the fact that credit unions work together, and is very committed to continuing the education that has been part of the mission of the credit union. “Teachers are a close-knit group and want to do the right thing, which falls into place with this credit union. We have the same attitude, which is a tradition that has been carried on since its beginning,” he said.
One of his goals is to work with schools in Springfield and Westfield to develop programs that will teach high-school students financial literacy.
“It’s important; you see so many college students who are in trouble due to credit cards and solicitations because they don’t know how to handle money,” he said. “I want to make sure we are doing everything we can to get kids on the right track.”
Classes would include an introduction to checking and how to save, and may also include sending a credit-union representative to the schools each month to make it easy for students to make deposits.
“Teens need to learn to be savers and understand when to get loans and when not to get them,” Ostrowski continued. “We see a lot of people who have overextended themselves financially because they are not financially literate, and since we are a teacher’s credit union, it’s really important to build that bridge, which ties in wonderfully to our roots.”
Ostrowski says the board of directors has always been financially responsible, and although the credit union took some losses two years ago, “we have turned the corner and are very much on solid ground. We are well-capitalized and are earning money.”
In short, it all comes back to doing the right thing — first and foremost for individual members, which translates into the bigger financial picture of the entire credit union.
And to this day, as Della-Giustina said, people who go there for help don’t forget what they learned in the hallowed halls of this teacher-founded banking institution that is still dedicated to education.

UMass Center at Springfield Looks to Grow Its Influence