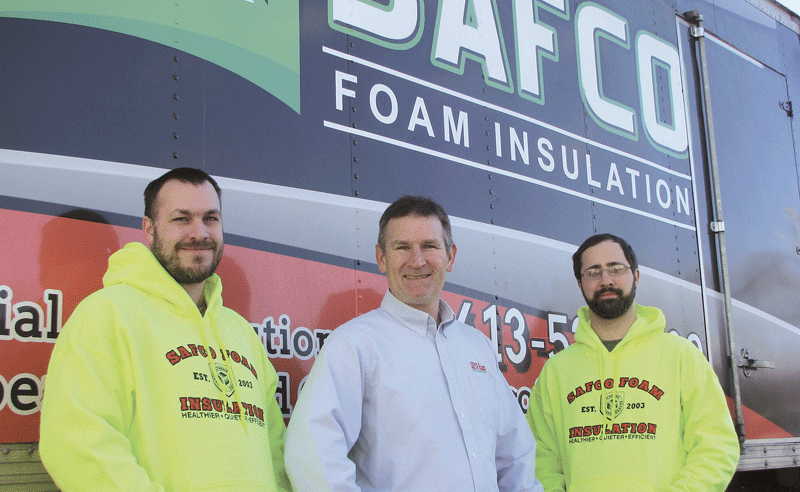 Stuart Fearn was a mechanical engineer by trade, but when the plant where he worked closed 12 years ago, he decided to switch gears and try his hand at entrepreneurship, figuring the sky was the limit.

“I looked at a bunch of different fields I might get into, and I came across spray-foam insulation,” he told BusinessWest. “I had never heard of it before, and I looked into it and studied it for months. I talked to people in the industry — suppliers and contractors from other areas, all over the United States — and I found out this was the real deal. So I decided to start my own business.”

He launched his Hampden-based company, Safco Foam Insulation, in 2003, touting the product’s ability to seal buildings more tightly than with fiberglass insulation, thereby reducing customers’ costs for heating and cooling. The timing, as it turned out, was ideal because of what was happening with energy prices at the time.

“When I started, those prices had started to rise. So my first five or six years in business, I saw 30% growth every year. Now I have multiple trucks and full-time crews, certified sprayers who have been working with me for more than eight years. All we do is spray-foam insulation.”

The upside for customers, Fearn noted, is the quality of the product. “The only downside is that it costs more money — initially.”

However, he said, “we did a cost analysis, and the average payback time is three years. It’s a no-brainer; it’s money in the bank. I ask people, ‘what else are you going to spend money on in your house that’s going to pay for itself? Nothing.’”

About 75% of Safco’s business comes through building and remodeling contractors — with about a 50-50 split between commercial and residential jobs — and the rest of the Fearn’s clients are homeowners.

“I’ve insulated hospitals; last year, we did a brand-new hotel,” he said. “We did the Pine Point Library renovation on Boston Road in Springfield. And we’ve done five or six jobs for Kringle Candle, which is a super-green company.”

Fearn recently sat down with BusinessWest to explain how spray foam is creating more energy-efficient new homes — and perhaps extending the lives of some older ones.

Spray-foam insulation, he explained, is sprayed onto any open surface or studded wall after electrical and plumbing services are in place. In seconds, the product expands to 100 times its initial liquid volume, permanently adhering to the surfaces of the surrounding building materials and sealing all gaps. The foam takes less than one minute to cure, and can be covered with sheetrock boards within a few minutes.

Icynene, the specific spray-foam brand Safco uses, is ‘hydrophobic,’ drying quickly after contact with water and losing none of its insulating properties. But it’s also breathable, so any moisture in the building’s concrete or lumber escapes through the foam, thus eliminating any risk of mildew or mold.

“It’s a solid, so it controls air movement, and condensation is eliminated,” he explained. “When that happens, it prevents rot, mold, mildew, all kinds of bad things. And the building life is a lot longer.”

For those reasons and others, “it’s becoming more and more popular, not only here in Western Mass., but all over the country,” Fearn said. “In Eastern Mass., around the Boston area, inside of 495, spray-foam insulation is the rule right now. It has the majority of the market share in certain pockets of the country.”

He noted that, across the country, insulation sales overall went up 6% last year, reflecting an uptick in construction following several lean or middling years. “But Icynene sales and market share went up double that,” he said. “The spray-foam business is growing throughout the country, along with awareness of the product.”

That awareness is being driven partly by popular home-improvement shows on the HGTV and DIY networks, he said. “About 50 people at the Home and Garden Show told me they saw this on Holmes on Homes, which uses it almost every week. They’ve used spray foam on This Old House. It’s becoming mainstream, and building codes are now encouraging it.”

When Fearn launched his enterprise, there were spray-foam insulators in Pittsfield and Charlton, but the field has since become far more crowded as the product becomes more popular with contractors and homeowners.

“We’re in a good place right now, but it is a very competitive environment. That means everyone has to be cost-competitive — and I haven’t raised my prices in probably seven or eight years,” he told BusinessWest. “At the same time, we’ve invested in the best equipment so my guys can work more efficiently, so we don’t have to raise prices.”

That’s the same kind of long-term cost analysis that consumers and contractors bring to the spray-foam decision, he noted, understanding that the initial cost up front is eventually surpassed by lower heating and cooling costs.

The proof, to Fearn, is in satisfied clients, noting that his company has completed more than 2,000 jobs. He ran into many of them at the recent Western Mass. Home & Garden Show at the Eastern States Exposition, and counted at least 24 fellow vendors through which his company had obtained work.

Indeed, spray foam saw an explosion in popularity over the past decade; in 2008, it represented about 3% of all new-home insulation but rose to 11% in 2012, riding a tide of stricter home-energy codes, according to a report by Home Innovation Research Labs.

But that figure fell back to 8% in 2013, and it may have to do with cost, the report noted. “Home builders are economizing across multiple product categories, using fewer and less expensive materials. This was seen in porches, decks, windows, flooring, and other product categories.” Meanwhile, with spray foam more common in higher-end homes, the market shift toward multi-family homes, currently accounting for one-third of all new home starts, might be keeping spray-foam sales down.

Still, Fearn continues to make inroads with the product, recounting a customer he saw at the show, a homeowner from Enfield. “He said, ‘thank you, thank you … you insulated my Cape, and it’s unbelievable; it’s super warm up there. I don’t even run the heat on the second floor anymore; I just heat it from the first floor, and the second floor stays warm, within two degrees of the first floor.’

“He was ecstatic,” Fearn went on, “but I said, ‘if you think you’re happy now, wait until the summer.’ Customers notice an even greater improvement in the summer, especially in a two-story house. Because of the foam insulation against the roof, it stops heat from coming in in the first place.

“Most people in our neck of the woods, when they think about insulation, they think of the terrible winter that just ended, and everyone thinks about heating,” he added. “But when are all the electrical brownouts? In the summer.”

Simply put, he argued, a product like spray-foam insulation reduces dependence on air conditioning, which reduces the load on the entire electrical grid. “The peak load on the grid comes during the summer. If we want to lower electrical demand in the summer, most of it comes in the form of AC. If we could minimize that, it would go a long way toward helping out our entire electrical infrastructure.”

Fearn noted that homes don’t have to be small or aesthetically dull to save on energy.

“These buildings insulated with foam are super-efficient, and they’re going to be affordable to keep around,” he said. “There are large, Victorian houses in Forest Park and Hill-McKnight in Springfield, and they’re beautiful. But if there’s a little more price increase in energy, those may be extinct because people just cannot afford to live in them and heat them.

“A large portion of the existing housing stock that is like that,” he went on. “That’s very worrisome to me. But it’s also market possibility for me.”

For the Big Night 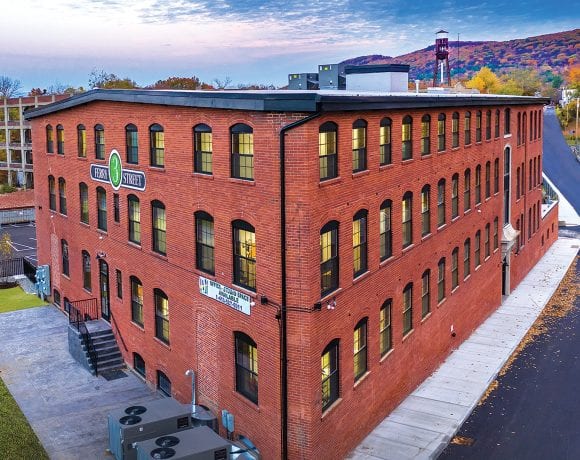