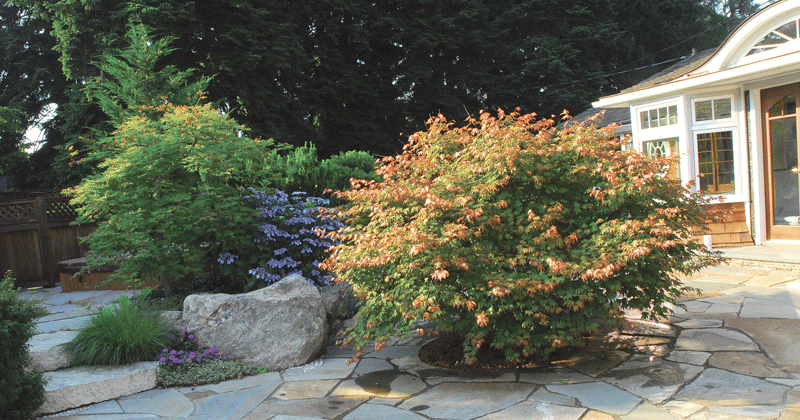 This landscape design by David Paine uses plants to create privacy as the steps behind this home lead to a hot tub.

Bill St. Clair likes to compare the plantings around a home to a frame chosen for an expensive piece of artwork.

It takes time and care to select the right frame — or, in this case, plants for a landscape design — but doing so is well worth the cost because it enhances the beauty and increases its value.

“Plants can transform a beautiful home into a picture,” said the owner of St. Clair Landscaping and Nursery in Hampden. “I tell people all the time they are the frame around a house.”

Andy Grondalski agrees and says plants can also be used to create outdoor living space. “Some people frame outdoor rooms with plants, while others use them on patios or along winding paths that lead to areas with a bench or pond or that open up into a field,” said the nursery manager from Sixteen Acres Garden Center in Springfield. “Annuals, perennials, shrubs, and trees can be used to define space and create a garden, and people can plant them with roses, hydrangeas, or different varieties of day lilies.

“But it’s important to find the right plants for the right place,” he continued, adding that he has measured out 20-foot spots at the nursery and had people place plants alongside each other before they buy them to make sure they like how they look from a distance.

“You may prefer something ornate, while other people want something simpler, but plants are an investment, so it’s important to be sure what you are getting is something you really like,” he noted. 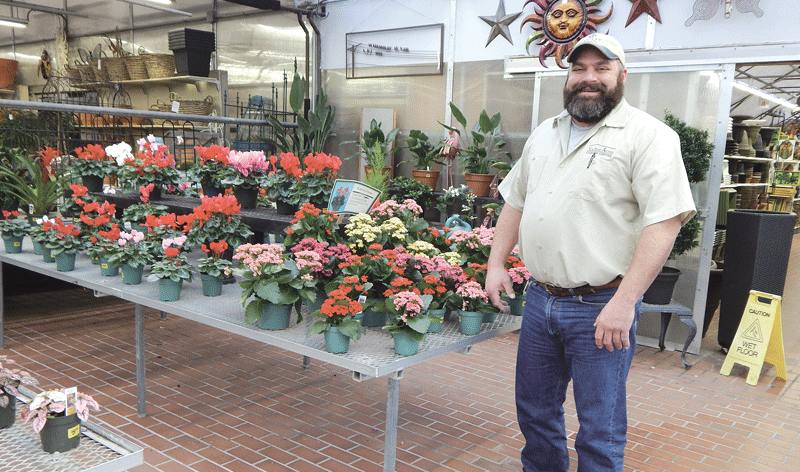 Andy Grondalski says people can have color in their yards year-round with the right mix of plants.

Local experts say it’s also critical to use plants with a USDA Hardiness Zone 5 rating because they can withstand the harsh New England climate. The zones are based on average annual extreme minimum temperatures over a 30-year period, and although some people purchase plants rated for Zone 4 and Zone 6, they are less likely to survive when the weather turns cold.

Although everyone wants plants that don’t require much maintenance, with the exception of mature trees and shrubs, they all need watering, and some require deadheading, pruning, trimming, repotting, and other work.

“Plants are alive, and anything alive has to be cared for,” Grondolski said.

David Paine, owner of Plan It Green in Northampton, advises people to use native plants as often as possible. “They are more apt to survive because they’ve lived here for thousands of years,” said the licensed landscape architect. “They also benefit the environment.”

Paine said some people shy away from oaks because they views acorns as messy or worry they’ll dent their vehicles when they fall, but oak trees provide incredible habitats; more than 300 wildlife species are known to use or make their home in oaks, including dozens of types of birds.

Flowering plants that attract bees and butterflies are also important and beneficial.

“We would lose many of our food sources if we didn’t have bees to pollinate plants, and although some people are afraid of them, they are far more interested in the nectar on flowers than human beings,” Paine said.

As the number of people concerned about the environment increases, those who love the look of a lush lawn are turning to varieties that are hardier and more drought-tolerant.

“Everyone wants their place to look nice, but Kentucky bluegrass needs two inches of water a week, so it’s almost irresponsible to plant it,” Paine said, adding that replacing turf grass with ground cover is also a growing trend.

Today, many landscapers use plants to define a space or create privacy around an outdoor living area. “We put Japanese painted ferns in 24-inch pots around a outdoor room in a Longmeadow home that has a fireplace and TV,” St. Clair told BusinessWest, adding that they are 18 to 24 inches in height and 36 inches wide.

The use of ornamental grasses is also on the rise because they reach heights of five to seven feet and provide privacy and interest, as well as a soothing sound when the wind ruffles through them.

The grasses need to be cut back six to 12 inches from the ground in the fall, although some people leave them standing until the spring because they like the way they look when they are covered with snow. They don’t begin growing again until late May or June, but can reach their mature height in two months.

“They came into popularity over the past decade, are relatively easy to care for, and provide a different aesthetic,” Paine explained.

People love colorful plantings, which can add beauty or create warmth in almost any area, and experts say color can be maintained year-round with a mixture of spring, summer, and fall perennials as well as bushes, including green or gold evergreens or holly, which are known for their glossy green leaves and bright red berries.

“You can also achieve year-round color by using only shrubs and trees, as there are so many interesting textures of foliage and bark,” Grondolski said. “Red twig dogwood shows up really nicely in the snow, and paperback maples have cinnamon-colored bark that peels off like birch bark. Their fall foliage is phenomenal in the fall, and when it comes to color, it’s definitely a multi-season tree.”

He added that reblooming hydrangea is one of the most popular bushes, and it’s possible to change the color of the plant’s flowers from blue to pink or purple by changing the soil composition and making it more acidic or more alkaline.

Filling large pots with plants can also add interest to a landscape, especially when they are placed on each side of the front door of a home or business. St. Clair has clients who like the look of these pots and have him change the flowers in them each season.

Others prefer a more permanent plant and opt for dwarf Alberta spruce trees in pots, as they do well year-round and can be decorated with lights during the Christmas season. They reach a height of three to four feet and can be sprayed in the fall with anti-desiccant oil that prevents the moisture from escaping so they don’t dry out during the winter, although they do need to be watered until the pot freezes.

The market for trees is also growing, and popular choices include varieties of Japanese maples with dome-shaped foliage that looks like an upright umbrella, Kousa dogwoods, Bradford pears, thundercloud plums, and apple trees.

“People can have a small orchard in a 50-by-50-foot space if they plant dwarf varieties. They are the easiest trees to grow, and you don’t need a huge area or have to climb a ladder to harvest the fruit,” Paine said.

Sixteen Acres Garden Center sold out of fruit trees last year, and Grondolski said people are still replacing trees that were downed during the tornado and freak October snowstorm several years ago. In addition to aesthetics, they are beneficial to the environment and reduce heating and cooling bills because they provide shade in summer and block the wind in the winter.

Choosing a plant or tree can be daunting, however, as growers continue to offer an array of new varieties. Some, such as the Kousa dogwood, are disease-resistant, while hollies have been genetically engineered; until about five years ago, a holly plant would not produce red berries unless there were a male and female shrub within 100 feet of each other. “But today, growers have propagated a holly that has the male and female in the same plant,” St. Clair noted.

Plants are an investment, and knowledge is required to make sure they not only survive, but thrive.

Sixteen Acres Garden Center guarantees its plants for a year, and the majority that are returned have failed because of the way they were planted.

“Many people make the mistake of putting soil too high around the stem, which causes rot and kills the plant. Or they place the plant too deep in the soil,” Grondolski said, adding that mulch around plants or trees should be tapered inward, and there shouldn’t be any about three fingers away from the base.

“If you want to ring a tree with mulch, you should create a bowl near the base that catches water and can be filled with a hose,” he told BusinessWest.

Paine said another mistake people make is not checking to find out how large something will grow. “A Colorado blue spruce is cute when it is young, but it will grow 70 feet tall and 35 feet wide,” he noted, adding that most plants eventually have to be moved or removed.

However, many don’t require the trimming needed years ago when most homes had a row of yews planted in front of them.

“Things in this profession keep evolving,” St. Clair said, explaining that, when he started out in business 40 years ago, most trimming was done with hand shears. That changed when gas hedge trimmers hit the market, but today, hand trimming has made a comeback.

“Gas trimmers aren’t selective,” he said. “For example, you can’t bring in a canopy on a maple tree with them, so more is being done today by hand, as people want a natural appearance.”

Another thing that has changed is the practice of planting yews in front of a home, which were occasionally punctuated by an azalea plant.

Paine said the idea of putting shrubs in front of a home originated in Victorian times because the multi-storied homes with steep staircases that were being built at the time didn’t look like they were anchored to the ground.

“So, people started planting shrubs around them to create a visual anchor. The nursery business developed as a result, and they tried to sell foundation plants to every homeowner,” he said. “But capes and small ranches don’t really need them, and in a lot of cases, they are out of scale with the house.”

Today, landscapers tend to put accent plants in key locations such as the corners of a home, on either side of the front door, or along the front walkway.

The amount of space people have to work with makes a decided difference, and Grondolski said people who have only eight to 10 feet in front of their home often choose to tier plants of different heights to add interest.

“But plant material won’t perform well unless it’s in the right location,” he cautioned. “If it needs a lot of sun and is in the shade, the growth will be stunted, and it will drop leaves or needles as it stretches to grow toward the light.”

St. Clair said many people with demanding jobs don’t want to spend time caring for the plants on their property. As a result, a growing number of clients have him maintain their plantings, and if they do their own maintenance, they make sure someone waters their plants when they are away during the summer.

“Protecting their investment is very important,” he said.

And, indeed, the reasons surpass aesthetics and money spent on them. “Many people find plants and gardens therapeutic, whether they are sitting on a bench and admiring them or down on their hands and knees working,” Grondolski said.

So, with longer days and warmer weather on the horizon, it’s an ideal time to look  online and make careful choices about plants that can be used to frame a property, enhance it, and increase its value.