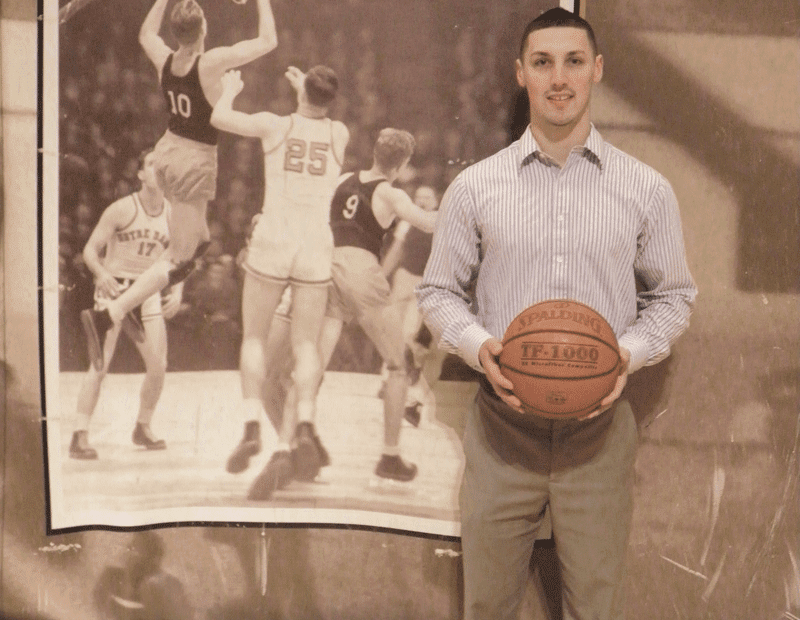 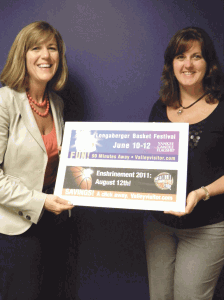 Mary Kay Wydra, left, and Michele Goldberg show off some of the advertising aimed at drawing people from the Boston area to Western Mass.

There are a number of traditions that are part and parcel to summer in this region — fireworks on the Fourth of July, family getaways to the lake, and stops for ice cream at roadside soft-serve stands, to name just a few.
Two more have been added in recent years: high gas prices, and seemingly endless speculation about the impact they will have on the local tourism industry. And those traditions will continue in 2011. Gas prices are already at $4 per gallon, and most analysts say they will go much higher. This has many restaurateurs and tourist-attraction managers understandably nervous, but there is also the sentiment that the fuel prices will keep people closer to home for their summer fun.
“For Americans, taking a summer vacation is a birthright,” said Mary Kay Wydra, director of the Greater Springfield Convention and Visitor’s Bureau. “People are going to travel, but they will probably make different choices. Based on the fact that it costs $60 to $80 to fill a gas tank, they may visit two attractions instead of three, and may eat at less-expensive restaurants.
“It’s very important this year that destinations show value to the customer,” she continued, hitting on a point that she and others would stress repeatedly as they assessed the approaching summer season.
And to that end, the bureau is teaming up with area venues to offer vacation packages that include hotel stays combined with discounts to hot spots such as the Naismith Memorial Basketball Hall of Fame in Springfield and Six Flags in Agawam.
This year, another of the bureau’s goals is to capture the interest of people in the eastern part of the state. “Our feeder markets are Boston, Connecticut, and New York, and we are targeting our marketing efforts in the Boston area this summer,” Wydra said.
A number of marketing initiatives will kick off in June, including digital billboards, online advertising, and a free coupon book that will be distributed at Exit 6 and Exit 15 on the Mass. Turnpike for a weekend, with signs posted before the exit to alert drivers to the giveaway who might otherwise breeze through the fast lane.
“We are cautiously optimistic about the summer. Our visitor numbers are never as high as major metropolitan areas like Boston, but they are also never as low,” Wydra said. “We are a drive-to destination, so it is important that we do everything possible to respond to rising gas prices. Destinations that get creative and show value to consumers are the ones that are going to be successful.”
For this issue and its focus on tourism, BusinessWest talked with a number of people in this sector about what they expect this summer, and what factors will determine the volume of travel — and spending.

Current Events
Wydra said the area is fortunate to have upcoming events designed to draw large crowds, such as the enshrinement at the Basketball Hall of Fame on Aug. 12, not to mention the Hoop City Jazz & Art Festival (July 8-10), Indian Day at the Museum of Springfield History (July 17), a Mini-Grand Prix car race in downtown Springfield (July 23-24), and the Six Flags concert series. “And if you go farther north, there are outdoor attractions which include zip lines,” she said.
Michele Goldberg, director of marketing for the Visitor’s Bureau, agrees. “There are two zip lines and three whitewater-rafting businesses in Charlemont. Plus there is the Quinnetukut Riverboat cruise in Northfield, the Lady Bea cruise at Brunelle’s in South Hadley, and boating, hiking and fishing,” she said.
Wydra touts the views from the rivers as attractions in themselves. “They are incredible, and the rivers are a magnet that attracts people of all ages,” she said.
Cliff Stevens is cautiously optimistic about the upcoming season. He owns Moxie Outdoor Adventures in Charlemont, which offers white-water rafting, family float trips, and related river activities. He says weather is always a major factor in the business.
“But last year we had a good season and held our own. We are expecting to do about the same this year,” he said.
The downturn in the economy has affected his bottom line, but Stevens hasn’t raised prices in about five years because he knows it’s important to keep excursions affordable.
“I think it will be a good season for local tourism,” he told BusinessWest. “We are no more than a tank of gas away for many people, so I’m optimistic that families will get out and relax. The trips we offer include lunch and have held up during the recession because they are a good value. There are five campgrounds in Charlemont, and people can stay at them, take a hike, go rafting, and have a nice getaway weekend, which has helped us.”
However, the soaring cost of gas has affected his employees, who typically have full-time jobs and work as river guides on weekends because they enjoy challenging situations as well as being on the water. “Some come from Boston, and the first question they’re asking is if I will give them money for gas,” Stevens said. “They are more hesitant to work for a day even though that has been their tradition.”
He is honoring their request because it is difficult to find professionals with enough expertise to navigate waterways that can quickly become treacherous.

Tanks for the Memories
Kevin Kennedy says the geographic area that stretches from the Berkshires to Springfield is home to more than 700,000 residents. “That’s a good-sized audience of people who don’t have to drive more than an hour to get to us,” said Kennedy, staff liaison of Museums10, a collaboration of seven campus museums and three independent facilities that have joined forces to attract visitors. The consortium is facilitated by Five Colleges Inc., which provides administrative support from its Amherst office.
“Each one has a different audience and different strengths, but there is also a lot of overlap,” Kennedy said. He views times such as these when gas prices soar and travel becomes more expensive as an opportunity to reach out to local audiences.
The group conducts an annual survey based on zip codes to gauge the economic impact their visitors have on the economy. Most guests drive from locations less than 90 minutes away, with many coming from Boston, Albany, New Haven, and Brattleboro.
“Because it’s an easy drive, people don’t have to wince too hard when they fill their gas tanks,” Kennedy said. “We’re also seeing folks from Hampshire County who have lived here for years and have been to some of the museums, but not all of them. People are looking for opportunities in their own backyards, and I think it’s good to have an increase in local visitors.”
The license-plate survey, which began in 2007, shows the most notable shift in attendance is the percentage of people from Massachusetts. In 2007, 37.9% of visitors came from the Bay State. That number rose to 47.3% the following year, held fairly steady at 45.6% in 2009, and climbed to 51.9 % last year.
Museums10 is looking to add value to its visits, and although six of the 10 museums don’t charge admission, they do feature gift shops, so the consortium is thinking about creating a card that would offer people reduced admissions and/or gift-shop discounts. 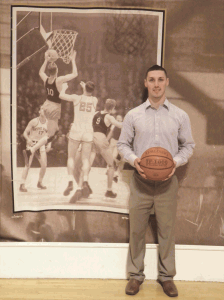 Mike Desrosiers says he’s optimistic about the year ahead at the Basketball Hall of Fame.

Meanwhile, things seem to be on the upswing at the Naismith Memorial Basketball Hall of Fame. And Marketing and Media Representative Mike Desrosiers thinks this will be a good season.
“If the recent spring vacation was any indication of how the summer will play out, we are very hopeful,” he said, referring to April school-vacation week. “We had an attendance level that trumped what we’ve done in the past few years, and that is always encouraging.”
Officials at Yankee Candle Flagship in South Deerfield are also optimistic, but their confidence stems largely from measures they have taken to attract visitors.
“We typically see 1 million to 1.5  million people every year,” said Jim Ovitt, director of retail operations. Most guests are within a 2 ½-hour drive, and when gas prices rose in 2008, Yankee Candle Flagship saw more local traffic and fewer visitors from outlying areas.
Its strategy has been to implement a continuous stream of new offerings that keep the attraction fresh and provide more reasons for visits.
“Several years ago when gas prices rose, we looked at what we could do strategically around key events that would drive traffic to this location,” said Ovitt, adding that such efforts have kept the company’s numbers stable. “The fact that we have free admission and offerings for every age makes us very attractive to families of two or more.
“We try to change things to make newness part of the excitement,” he continued, “with events, entertainment, and attractions within the store such as our Wax Works, where people can create their own candles from wax beads with layers of fragrances. It has been so popular, we had to renovate the area twice to add more capacity.”
The candy shop is under renovation, and will reopen as Yankee Candy, while Santa’s Toy Shop is being expanded in line with its successful marketing strategy.
The New England Air Museum in Windsor Locks, Conn. has not experienced the same success. Although the facility is only about 20 minutes from downtown Springfield and a member of the Greater Springfield Convention and Visitor’s Bureau, the attraction has not been faring well, said Assistant Director Debbie Reed.
“The state line seems to scare people off,” she said. “It’s almost like a barrier, and we don’t know why.”
Museum officials hope to reverse this trend via a radio-advertising campaign aimed at the Springfield market. There is optimism, but administrators are adopting a wait-and-see attitude.
“January was terrible because of the weather; the last three months have been OK, but there is uncertainty because of the gas prices,” she said. “This season could be good, or it could be bad; we don’t know what to expect.”
However, a number of special events are also on their menu, including the annual Space Expo, which typically draws visitors from Rhode Island, Connecticut, Vermont, and parts of Western Mass.

The Bottom Line
Looking ahead to the summer season, the ever-optimistic but also realistic Wydra said there are a number of question marks hanging over the tourism sector — another tradition of sorts.
But while there is a good dose of concern about whether gas prices will temper visitation to area attractions and overall spending, there is widespread optimism that this sector will withstand that challenge and post solid numbers.
But as Wydra and others said many times, it all comes down to providing value.
“The term ‘new’ is so important, as new elements keep people coming back,” Wydra said. “And our attractions are always reinventing themselves.”