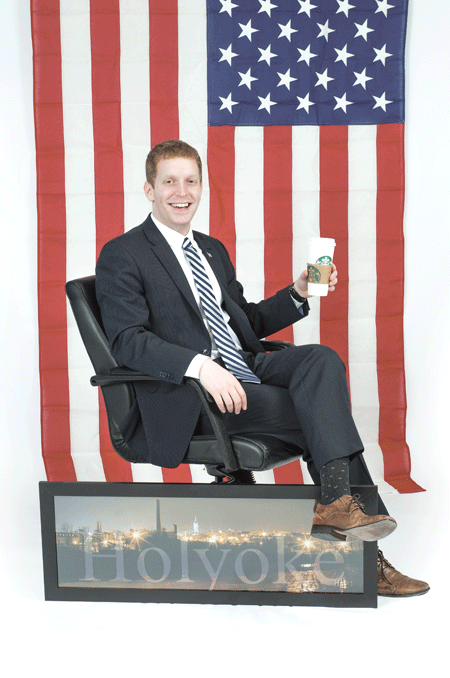 Looking back on his first 27 months in office, Holyoke Mayor Alex Morse says there’s been progress logged in many areas and some notable accomplishments for the team he’s assembled.

The Mass. Green High Performance Computing Center has opened its doors, a creative economy is taking shape, a long-awaited urban-renewal plan — a sweeping initiative to revitalize the downtown through the reincarnation of the Holyoke Redevelopment Authority — has been introduced, an Innovation District has been created, a Community Literacy office has been established, and a tax-incentive program to stimulate new growth has been launched.

But Morse, the youngest mayor in the Paper City’s history when he was elected in the fall of 2011, said that perhaps the most important development — and it results in part from all of the above — has been his administration’s ability to “change the language around Holyoke,” as he put it.

“The number-one thing we’ve done, and in a relatively short period of time, is change the perception of the city,” the Holyoke native told BusinessWest. “And it had to start from within — we needed the residents of the city to feel there’s a sense of progress and that the city is going to get better, and that’s happened.

“The most humbling, and exciting, thing for me is going around the Valley and across the state and hearing people talk about Holyoke in a positive way, with this energy and excitement,” he went on. “I promised to be the chief marketing officer of Holyoke, and I’ve fulfilled that.”

There is considerable work still to be done, but Morse believes the foundation for progress has been laid. And the process of doing so has been a fascinating learning experience for the Brown University graduate and urban studies major.

He said every day is different and uniquely fulfilling, that he’s encouraged by the way in which all those on his team are working toward the same goals, and that perhaps the biggest downside is the slow pace of government, something he wasn’t fully prepared for.

“I’m oftentimes impatient when it comes to implementing new things and programs and seeing changes,” he explained. “Sometimes it takes longer than you’d like.”

But he believes the needle is moving in the right direction and this city, steeped in history, is ready to write some more.