Low Bids Create Budget-friendly Opportunities, but for How Long? 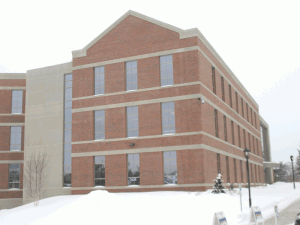 WNEC saw its Center of the Sciences and Pharmacy go up at a budget-friendly time for those who want to build.

It’s been the bane of builders for a long time now: with demand for commercial construction down and competition fierce, they’ve been forced to bid very low to have any chance at winning jobs. That has trimmed profit margins to a bare minimum, eased only by material and labor costs that have remained suppressed as well.
All that has created a landscape of opportunity for businesses willing to take the plunge and build during a time of economic stagnancy.
“It’s still an exceptionally good time to build, and it probably has been for a year, year and a half,” said David Fontaine, president of Fontaine Brothers in Springfield. “And that trend is continuing.”
Higher education is one industry that has embraced the advantages of building when prices are low, said Fontaine, whose firm counts colleges and universities among its niches. He recently finished a new math and science building at the Berkshire School in Sheffield; “the price on that was 25% below the budget just a few years ago.
“The private colleges seem to have picked up on this,” he continued. “Last year we just finished the pharmacy school at WNEC, which benefited immensely from that market, and a dormitory at the College of the Holy Cross; they put that out to bid a year ago and benefited tremendously.”
Fontaine said some boards of trustees are looking anxiously at their own squeezed budgets, yet rationalizing that saving 25% or more on needed capital projects is a smart move in the long term. And that’s true across all regions of the state.
“We’ve competed for six or seven decent-sized schools in Eastern Mass. in the past year, and they have all come in 15%, maybe 20% below projections,” he said.
The state has been another beneficiary, seeing its federal stimulus dollars stretch further than officials had anticipated. Early last year, according to a Boston Globe report, the winning bids on 48 transportation projects had collectively come in $59 million below the $226 million that state originally estimated the work would cost. The average was 22% below contract estimates.
“It is a good time to build, no matter what sector you’re in,” said Peter Wood, director of sales and marketing at Associated Builders in South Hadley. Contractors only hope more companies realize it, creating a larger pool of projects and gradually raising bids, before a rising tide of material costs makes their outlook even more dire.

Steeling for Change
Indeed, many materials costs are beginning to rise — a good sign for the industry in the long term, but one that could pinch already-stressed builders right now, as bid prices remain flat for the time being (see related story, page 26).
Specifically, November saw significant jumps in prices for diesel fuel and copper — two key resources in construction — while weak demand for construction forced them to hold down bid prices despite the cost increases, according to the Associated General Contractors of America.
These price jumps “could be the last straw for some hard-pressed contractors,” said Ken Simonson, the association’s chief economist, in his monthly report. “With unemployment in construction running at 18.8% — double the all-industry average — any more business failures will only add to the industry’s misery.”
Then in December, prices for materials used in construction jumped 0.9% (and 5.4% for all of 2010), while price indexes for finished buildings remained flat over both time periods. Construction costs also outstripped the producer price index for finished goods, which rose 0.6% in December and 4% in 2010.
Simonson noted that prices soared at double-digit rates over the year for four key construction materials. Diesel fuel prices climbed 2.3% in December and 28% in 2010; steel-mill product prices rose 0.5% and 12.5%, respectively; copper and brass mill shape prices were up 1.3% and 12%; and prices for aluminum mill shapes rose 12% over the year, despite a 0.2% dip in December.
“Structural steel is a big-time barometer of what’s going on, and it has started to creep up in the last month,” Fontaine said. “It’s an indicator that manufacturers and suppliers can only provide a product for so long at costs that don’t make any sense. It’s changing direction, and it has to; we’ve had two years of people just giving things away. And when steel starts to climb, a lot of things follow it.”
For contractors, there is worse news to come, said Simonson, noting that, since the latest data was compiled, suppliers have announced further price increases for copper, steel, and diesel fuel. “With contractors unable to pass along the increases in the price of finished buildings, many firms could be pushed out of business,” he said.
Even as material prices rise, weak demand for construction, combined with intense competition for work, is forcing contractors to hold the line on bid prices, Simonson observed. The producer price index for new office construction actually dropped 0.8% for the year. The index for new industrial buildings was up 0.4% in 2010; for new warehouses, it rose 0.4%; and for new schools, it was up 1.3% for the year.
Other items that contributed to the December climb in material costs included lumber and plywood, architectural coatings, paint, brick and structural clay tile, and gypsum products. Prices have remained fairly stable nationally for asphalt paving mixtures and blocks, concrete products, and insulation materials, according to the association.
“Contractors have been unable to recoup these costs in what they charge,” Simonson added. “Indexes for new office, school, warehouse, and industrial buildings were virtually unchanged … over 12 months. Prices charged by concrete, roofing, electrical, and plumbing contractors showed very small movements in either direction.”
Contractors are likely to be squeezed by rising material costs and flat prices for completed projects for the foreseeable future, Simonson predicted. He forecasted that contractors would experience periods of simultaneous price spikes in multiple materials in 2011 as the U.S. and foreign economies pick up speed.
“Unfortunately,” Simonson said, “demand for construction will be erratic for months to come, worsening the price pinch that has already devastated too many firms and their workers.”

Doing What’s Necessary
In the meantime, builders and subcontractors alike continue to bear the squeeze in order to keep working, and low winning bids remain the order of the day, continuing a period of opportunities for businesses willing to invest in additions and renovations.
“The subcontractors seem to be extremely hungry, as far as doing what’s necessary to keep surviving in this market,” Wood said. “Many are more than willing to travel outside their comfort zone — from Eastern Mass., Connecticut, and the Albany area, they’re coming to the Valley.
“Contractors in the private sector have the ability to pick and choose their subcontractors, but you still want to pick the most reliable as well as the most cost-effective ones,” he continued. “We do our best to see the local subcontractors working instead of just taking the lowest bid — and the locals are giving us competitive bids, so they’re not getting shut out of the marketplace.”
Yet, with costs on the rise, the squeeze continues. The question is, when will more companies take advantage?