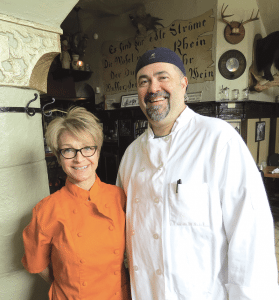 Joe and Liz Stevens are now in their 20th year as owners of the Hofbrauhaus, which opened its doors eight decades ago.

It was given that name because Gene Sapelli, a regular customer at the Hofbrauhaus, liked his crustacean prepared a certain way, said Joe Stevens, the establishment’s long-time owner and chef.

“This is a two-and-a-half-pounder … we take all the meat out and then put it back in the shell, so all you need is a knife and fork,” he said. “We’ve been doing it this way since the ’70s.”

You won’t find Sapelli lobster on the printed dinner menu at this West Springfield landmark, but it’s always there, and the regulars know to ask for it. It’s more than a specialty, it’s a traditiom — and there are many of them here.

And there should be, considering that this is the establishment’s 80th year in business, and Stevens and his wife, Liz, are in their 20th year as owners.

There are also the many holiday buffets at the Hofbrauhaus. The place was packed for Easter, and Stevens is expecting the same for Mother’s Day, although he’s anticipating some late reservations because Mother’s Day (May 11) is coming hard after Easter, which was late this year, and “it might sneak up on people.” Meanwhile, Thanksgiving is a different kind of tradition. Indeed, while many eat at the restaurant, a number of regulars will give Stevens and his staff their order for a full dinner, and they’ll pick it up at a pre-arranged time at the back door (more on that later).

There’s also the annual game dinner each winter, the German outfits on the staff, the dozens of steins on the walls, and other culinary mainstays, such as a huge veal shank, which, like the lobster, isn’t on the menu, but regulars with a healthy appetite know all about it.

But this is a different and far more challenging time for restaurant owners than the landscape that existed in 1935, when the Hofbrauhaus opened, or when Joe and Liz Stevens took over in 1995. By his estimation, Joe said, 85 or 90 restaurants have opened in West Springfield alone since he assumed ownership — but who’s counting? And the list keeps growing; yet another burger restaurant is opening on Route 20 in a former Friendly’s location.

Meanwhile, the economy, while improved, remains sluggish, and discretionary spending is still undertaken with caution. And then, there was the tornado of 2011, which passed right over the restaurant and deposited new furniture acquired for the outdoor dining area, the so-called beer garden, into the Connecticut river.

The juxtaposition of all these challenges has necessitated the creation of some new concepts and programs, some of which are on their way to becoming traditions, said the couple. These include the ‘beer-of-the-month dinner,’ at which attendees can get a large stein of beer and dinner for $15. The featured libation at the May 7 event is something called Workers Comp Saison from Rhode Island-based Two Roads Brewery, and slow-roasted beef brisket and pan-blackened cod are on the menu for the buffet dinner. 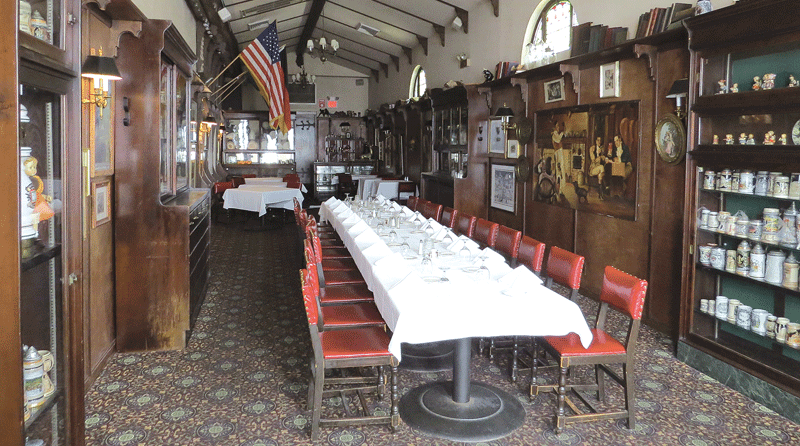 The Stein Zimmer, used for small groups and special functions, is one of the many unique aspects of the Hofbrauhaus.

There’s also Fraulein Fun Night, which, as the name suggests, is a regular gathering of women (the first or second Thursday of every month) for food, beverages, networking, and a chance to become informed. Liz Stevens, who created this series, schedules a speaker for each get-together; the May 8 event features an intriguing program tiled “Where Chocolates and Vitamins Meet.”

“I try to feature someone fun, interesting, and who doesn’t cost them anything,” she said of the lineup of speakers. “We’ve had massage therapists, nutritionists, a life coach … it runs the gamut. It’s a fun night out, and the women look forward to it.”

The couple has even gone so far as to change, or amend, the name of the establishment, to make it clear that it serves much more than traditional German food. While ‘Hofbrahaus’ remains over the door, ‘Hofbrau Joe’s German Steakhouse’ has been added to the menu and most marketing materials.

This mix of and new and old, traditional, and different is enabling this landmark to add some new chapters to its rich history, said Joe Stevens, adding quickly that creating such blends is the challenge facing all restaurants today, and especially those that have been part of the landscape for decades and need to attract the younger generations.

Stevens said there’s a beer cooler in the basement with walls that are a foot and a half thick.

That’s where he ordered everyone to go late in the afternoon on June 1, 2011, when it became clear that there was a tornado moving southeast through West Springfield, and the Hofbrauhaus was apparently in harm’s way.

“We had everyone wait in that refrigerator,” he recalled, adding that the twister apparently “bounced” across the property, touching down in the parking lot, damaging the beer garden, roof, and other parts of the building, while also taking down a house behind the landmark.

“It did not discriminate,” he said while reciting the damage and putting an estimate at $400,000. “It picked up some of the tables and chairs from the beer garden, deposited them in the river, and then went over the [Memorial] Bridge. We saw them floating there for a couple of days before they got carried away in the current.”

Using some humor to help get across his frustration, he said the insurance company “could not get me that money fast enough.” In reality, the last check came just a few weeks ago, after the matter went to court.

Looking back, Stevens said the tornado has been one of many challenges the institution has had to weather the past several years, including a recession that seemed without end, especially for a sector that feels downturns perhaps more than any other, and a crush of new competition along the I-91 corridor he serves.

“We’ve taken a few lefts and rights recently, but we’ve bounced back,” he told BusinessWest. “We’ve recarpeted, redecorated, and taken some steps to bring more people to our door. And business has been good.”

Taking lefts and rights is certainly part of being in the ultra-competitive restaurant business, said Stevens, who should know — he’s been doing this for more than 30 years now as chef and owner.

His first foray was the Glass Lily, located in the Longmeadow Shops, which he owned and operated for eight years — a time he called a great learning experience.

When the Krach family, which assumed ownership of the Hofbrauhaus in the early ’70s, decided to put the landmark on the market a quarter-century later, Stevens took what he considered to be a calculated entrepreneurial risk. 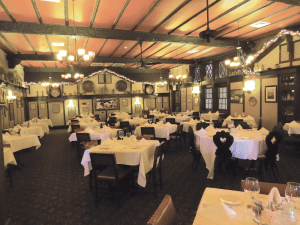 The main dining room reflects the many traditions and rich history at the Hofbrauhaus.

Over the past two decades, the couple has continued those aforementioned long-standing traditions while also employing a number of strategies — from heavy use of social media for branding and event promotion to introduction of new programs that introduce, or re-introduce, people to the restaurant.

The name alteration is part of all that, said Stevens, noting that, with the addition of the words ‘German Steakhouse,’ the institution is generating new business by making the breadth and depth of the menu more apparent to all.

Indeed, while the restaurant serves German favorites such as weiner schnitzel, bratwurst, and beer-battered shrimp, it also offers a variety of steaks (some cooked tableside), Scottish salmon, rack of lamb, and, yes, lobster.

The popular holiday buffets continue to draw several generations of area families, he told BusinessWest, while the Thanksgiving tradition of cooking whole dinners for pick-up, which goes back to his days at the Glass Lily, represents a higher level of customer service.

“People order a whole turkey with me, I cook it, they get stuffing, vegetables, potatoes, whatever they want for sides, and off they go,” he said, adding that the nearby Dante Club makes its ovens available so Stevens can meet 60 or more orders a year. “People know the drill — they come in the back door, their times are set every year. We work through the night, but have a great time doing it.”

Meanwhile, some of the new initiatives are expanding the customer base, he went on.

The beer-of-the-month dinner is helping to make a traditionally slower night, Wednesday, less so, he told BusinessWest, while the Fraulein Fun Nights are attracting crowds averaging about 40 women.

Many of them are business professionals, said Liz Stevens, adding that she has regular groups from Baystate Health and MassMutual, but also new faces every month.

But beyond the new initiatives, new carpeting, and a larger, lighted parking lot, the basic ingredients in the recipe for success haven’t changed, Joe said. “It’s still all about offering good, consistent service and good food. It’s as simple as that.”

Joe Stevens said there’s a lot of history at the Hofbrauhaus, from the old, art-deco neon clock in the kitchen, which dates back to when this was a dinner and dancing hall in the ’30s, to the stained-glass windows in the dining room (used for small groups) called the Stein Zimmer, to the mural depicting scenes from Germany that wraps around the main dining room.

The Krach family uncovered it while cleaning one day — it was buried under decades of accumulated grease, dirt, and tobacco smoke — and spent months restoring it, said Stevens, adding that it is one of many topics of discussion for long-time customers who know the history and can point to the small patch that was left uncleaned to show how dark and deep the filth was.

“We have so many customers that come in and tell us stories about this place from when they were growing up,” he said, “ because it’s been here their whole lives. They talk about how their fathers and grandfathers and great-grandfathers have been there, and all the weddings this place has done.”

The challenging assignment moving forward — one that Joe and Liz Stevens have undertaken with determination and imagination — is simply to write more history.

And they’re doing just that. 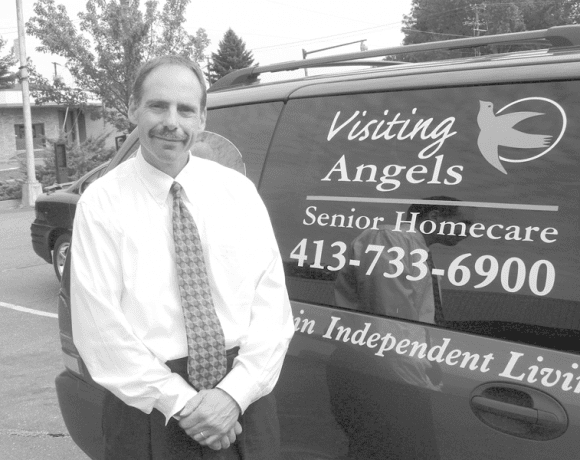 A Matter of Trust

Thinking Outside the Box of Chocolate